The Gran Premio de España had the fans on the edge of their seats as 2021 MotoGP World Champion Fabio Quartararo chased 2021 Vice Champion Francesco Bagnaia. The Yamaha man tried to put the pressure on, but in the end settled for second place. Franco Morbidelli didn’t let tire pressure issues hold him back from putting up a fight, especially at the end of the race. He secured 15th place. 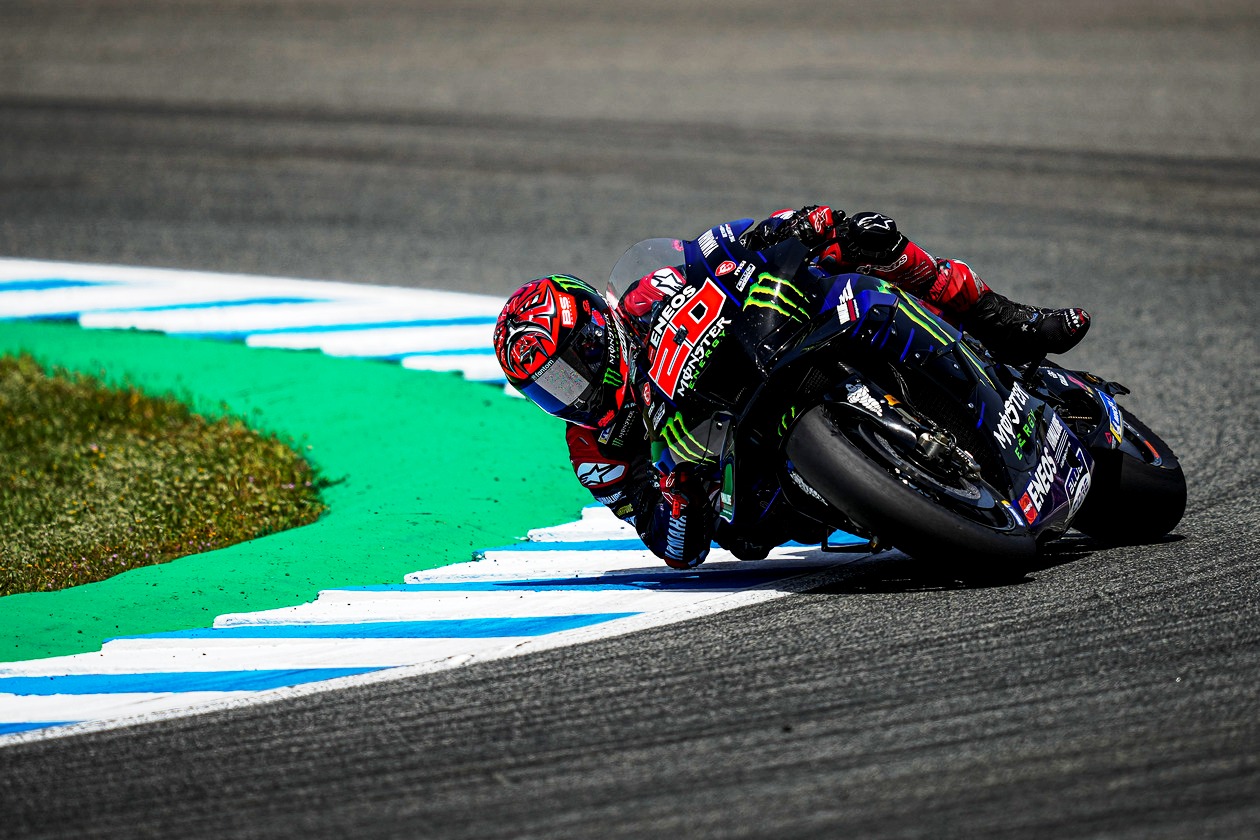 Quartararo had a good launch from P2 on the grid and held his position. He knew that Bagnaia was trying to build a lead early on, and the Yamaha man would do everything in his power not to let that happen. The two were starting to break away from the pack. 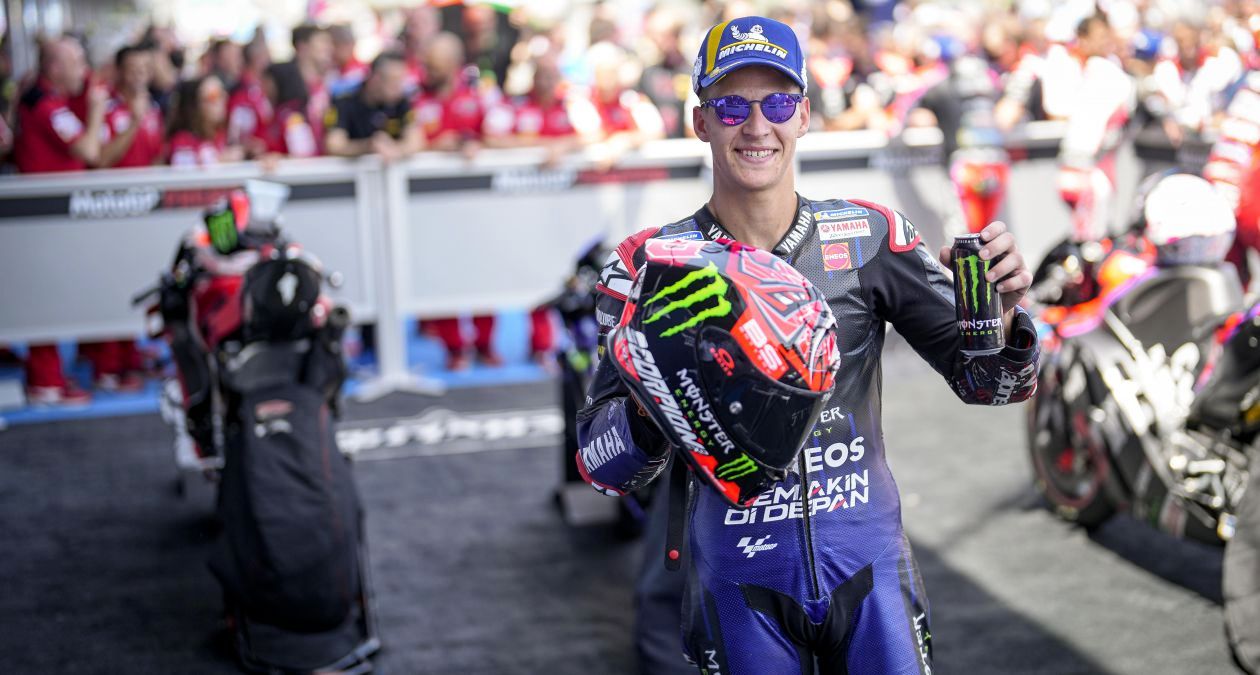 The number-20 rider managed to keep the pressure on, staying closely behind. The front men were the only riders able to dip under the 1’38s mark, clocking 1’37.6s times on lap 5. El Diablo was on the limit every lap and was trying to make a move on the last lap. He was dangerously close, but in the end came just short of being able to put in an overtaking maneuver. He took the chequered flag in second place, 0.285s from first, but with an increased lead in the championship of 7 points. 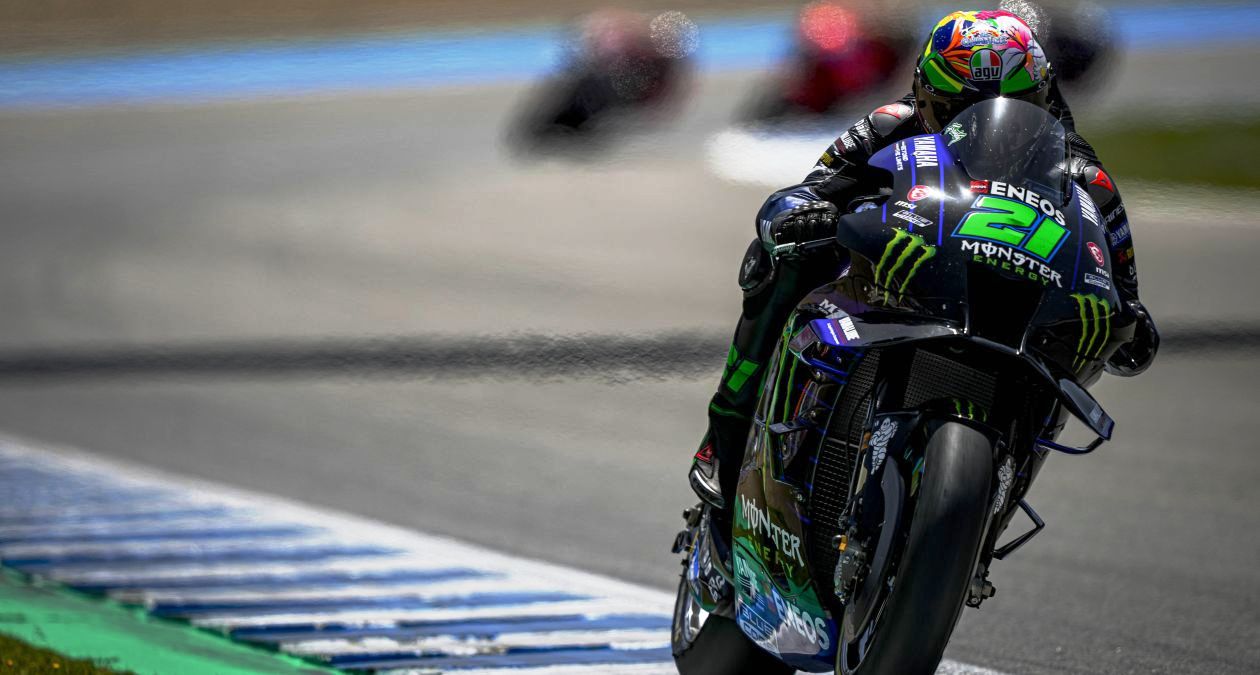 Morbidelli initially had a good start from P16 and picked up a position but crossed the line in 16th place. Having settled there, the Italian was keen to gear up for a fight for the championship points. However, tire pressure problems held him back.

Nevertheless, the number-21 rider continued to push. With Alex Rins going wide and Johann Zarco crashing out, he maintained his position for the majority of the race. He kept his head down but saved his tires for the final stages. With five laps to go, he was setting various personal best sectors and followed it up with an overtake on Luca Marini to take 15th place. A brilliant last lap saw him almost take 14th place from Maverick Viñales, but in the end he crossed the finish line in 15th, 27.519s from first. 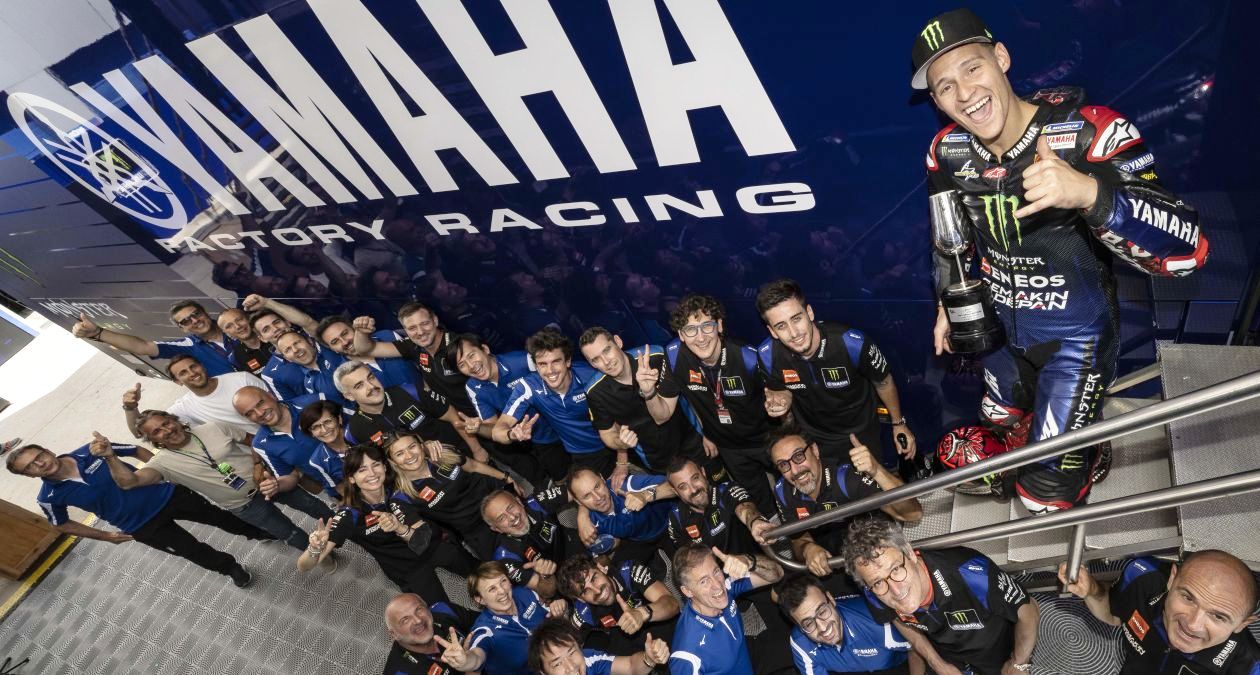 The results keep Quartararo in the lead in the championship standings with an 89 points total, while Morbidelli is now in sixteenth with 18 points. After Round 6, Yamaha and the Monster Energy Yamaha MotoGP team move up to second place with 89 points in the Constructor championship and continue to hold third position with 86 points in the Team championship. The team will be back in action at the Circuito de Jerez – Ángel Nieto tomorrow for the one-day official IRTA test. 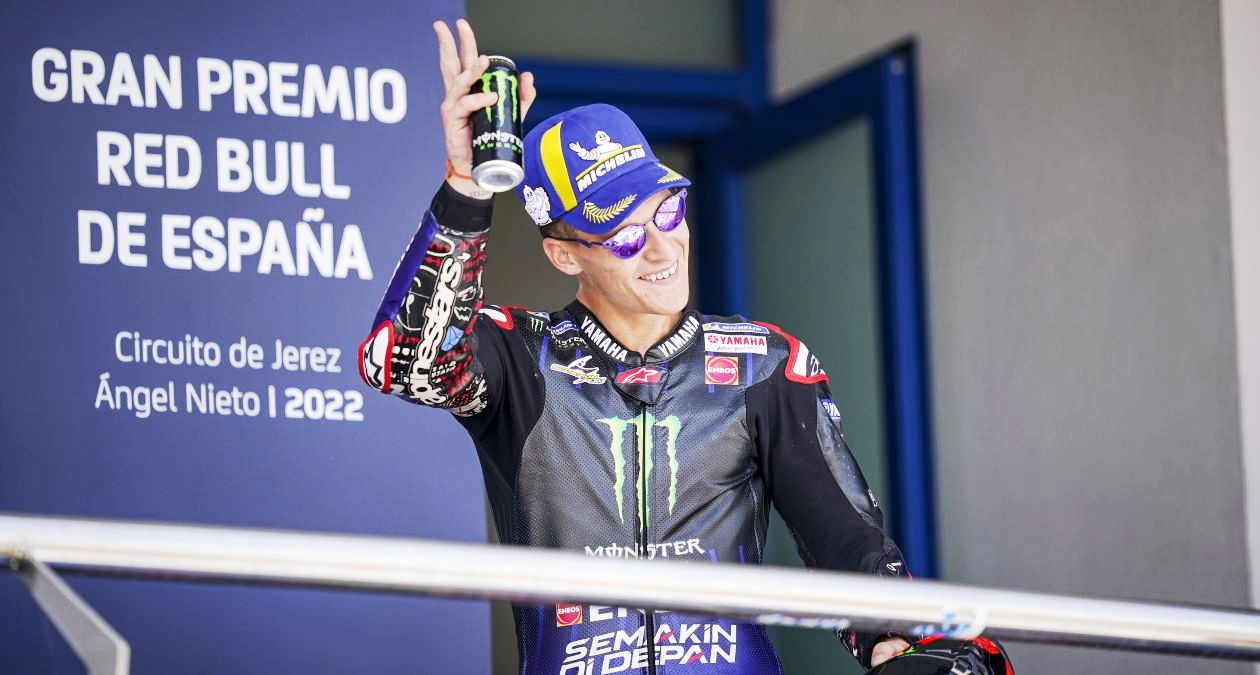 Massimo Meregalli (Team Director): “The aim was to score as many points as possible. This was a track we thought we had a good chance to do a good race, though we did already figure it would be a difficult one to win. We got the job done. These 20 points for Fabio are important. He did try to win, and came close, but there came a point in the race that he understood he had to give the situation some consideration. I think he can be happy with this second place, and especially with the pace he showed. Franky finally found something in the morning that he likes and feels comfortable with on the bike. The feeling he had in the morning was good. I would like to say that I think that because of this new setting his season will really start in two weeks’ time in Le Mans. It’s a shame that it came too late for this weekend. Starting from the sixth row was difficult. It made the tire pressure go up, making it very difficult to ride, but he managed. He did what he could, knowing he could have done a completely different race. This is a positive sign, so we are looking forward to Le Mans with increased confidence, and we also have the test to get some extra work done.” 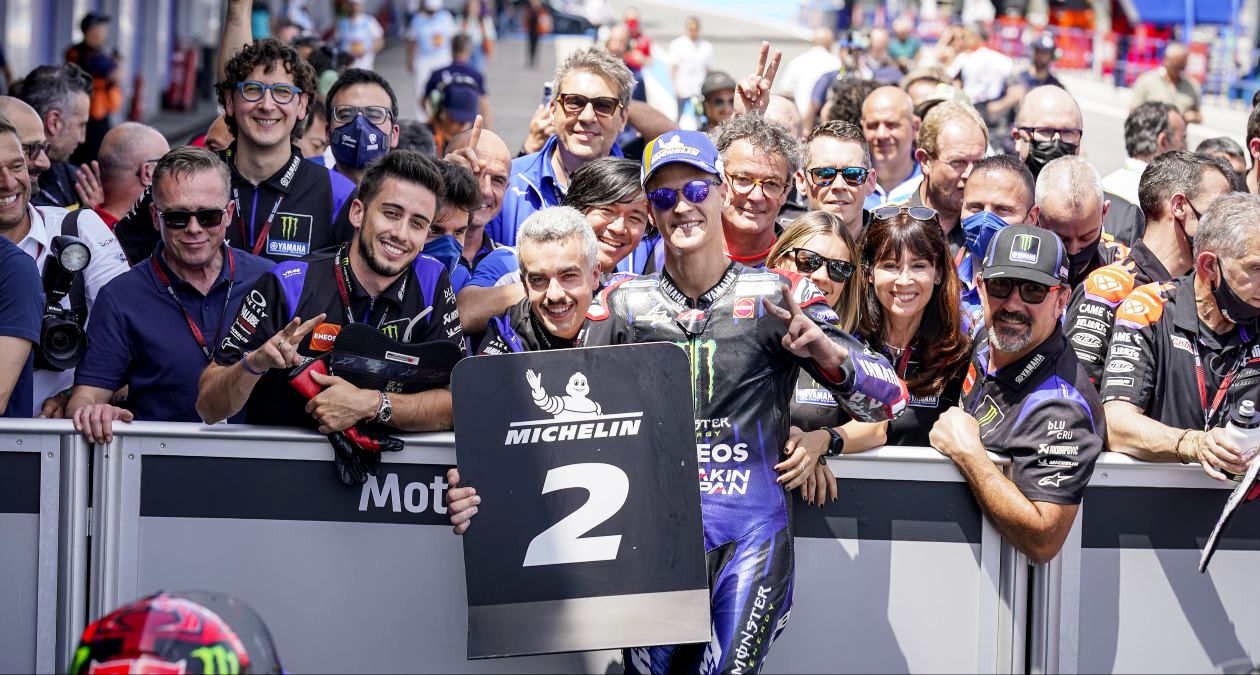 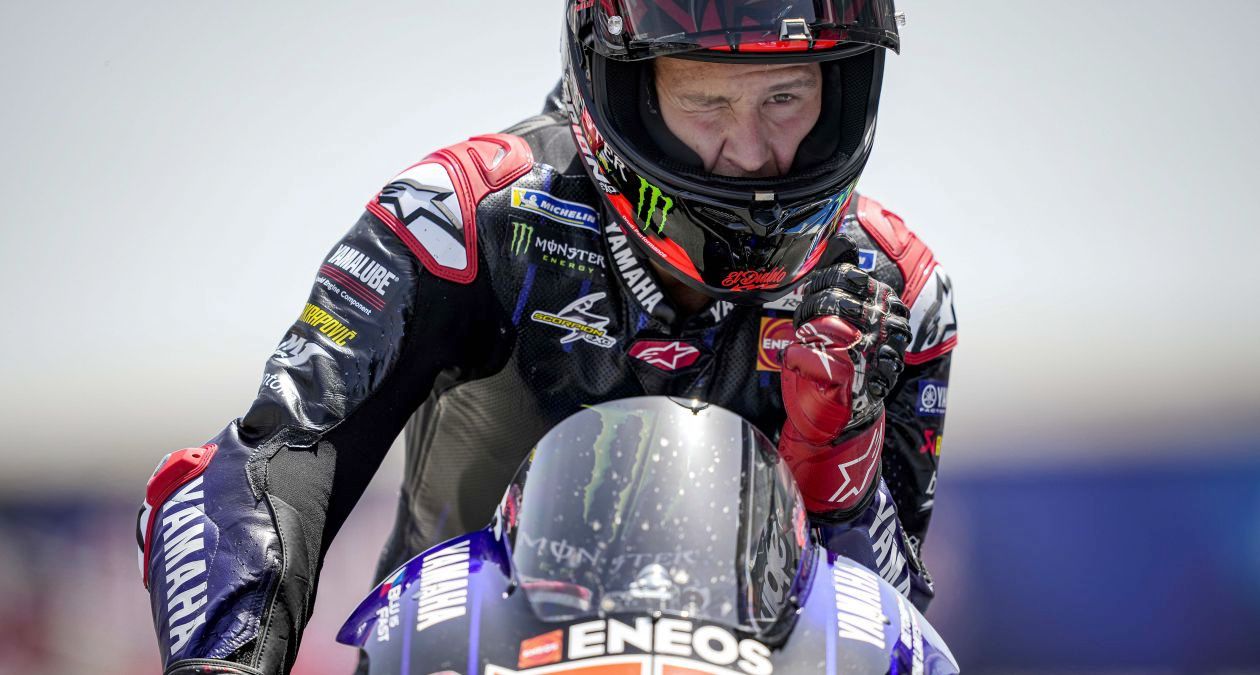 Fabio Quartararo: “It was a really tough race. I tried to overtake Pecco on the first lap because I knew that staying behind him was going to be difficult for my front tire. I tried everything, but he was really fast. I think the pace that we managed was just insane. My front tyre was super hot, super high pressure. I couldn’t brake harder, but I could maintain that pace with him. I think the gap to the guys behind us was quite big, so both of us were really fast. Congratulations to him. It wasn’t a real battle, because we didn’t overtake, but it was still an intense race. We enjoyed it a lot.” 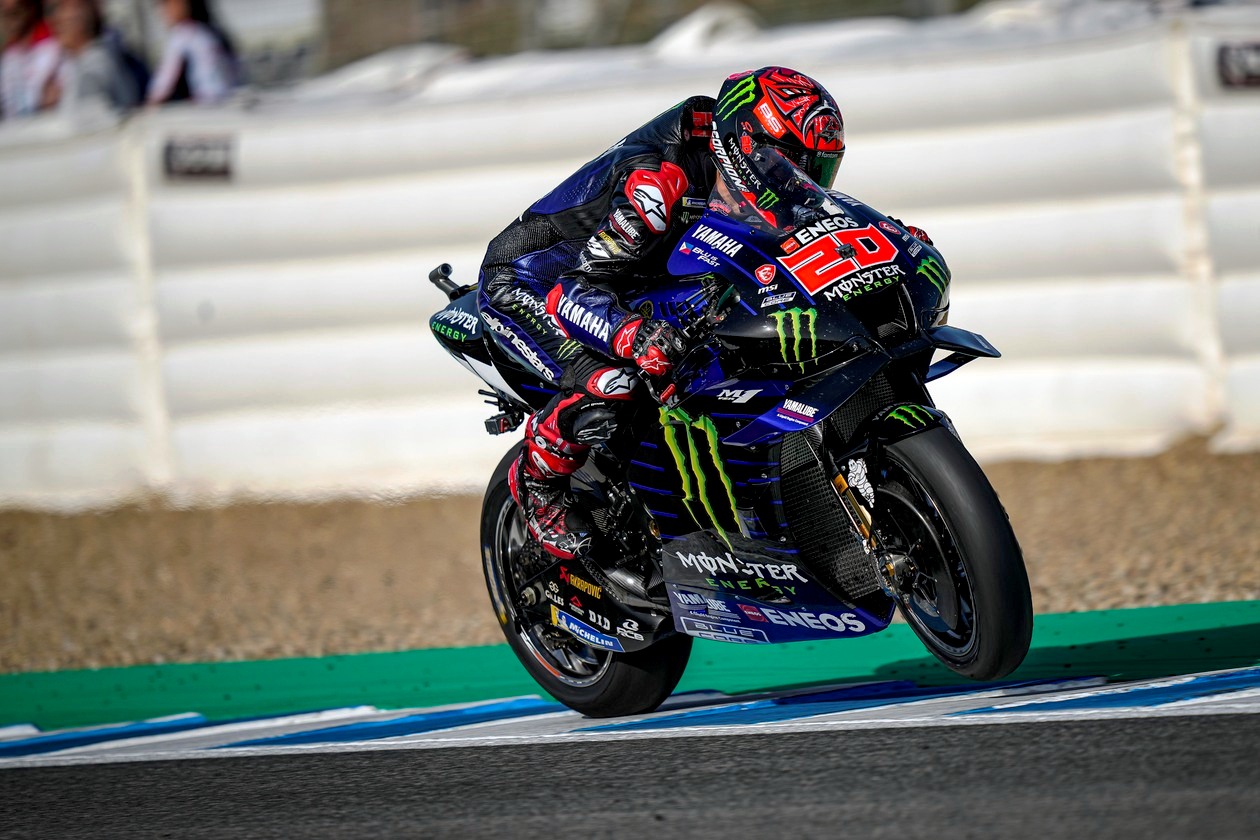 Franco Morbidelli: “When you start from far behind, and it’s difficult to overtake like it is for us, the front pressure goes sky-high and you can’t ride anymore. Basically, I couldn’t push all race long. I could only push when I overtook Luca, three laps before the end. Actually, the lap times weren’t so bad towards the end. But starting from far behind things are like this. We will work to refine everything and make another step in the test, and then we will see in Le Mans.” 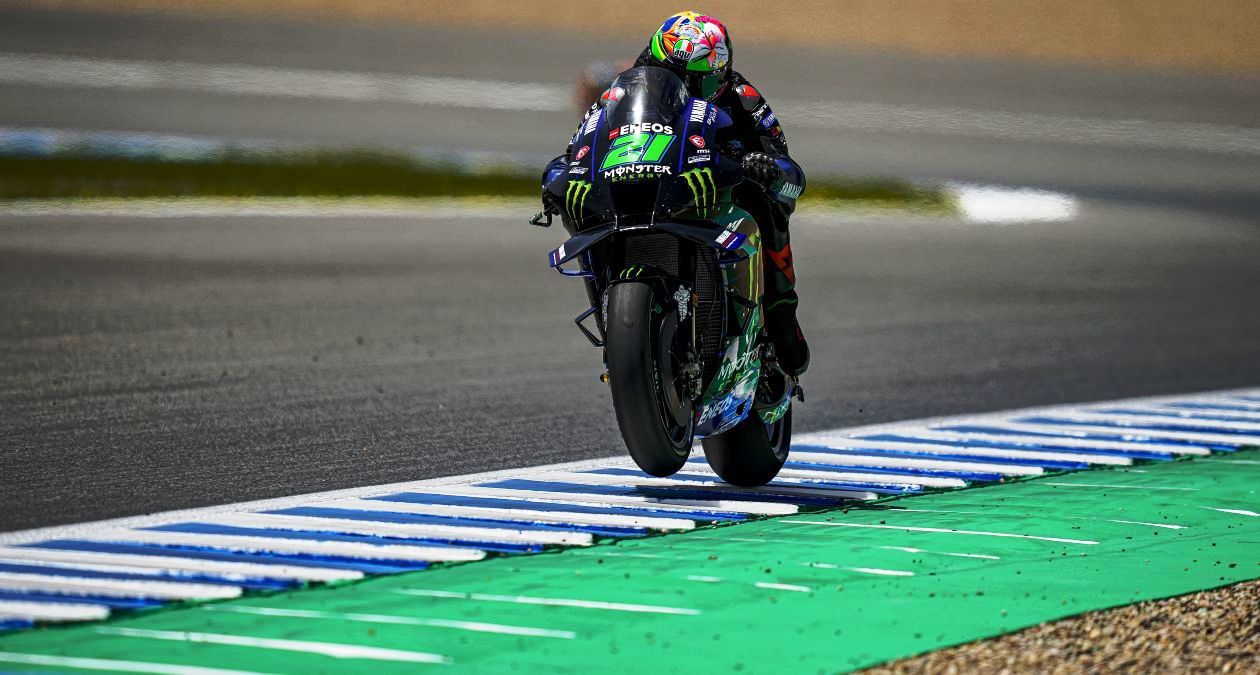 credit: Yamaha MotoGP
Thank you for visiting insideracing.com.ph. While you are here, kindly don’t forget to click on our advertiser ads above, visit their site and consider them for your motorcycling needs. It will help us a lot.
You can also order a copy of our monthly print magazine for more riding contents to read and enjoy at your leisure anytime by clicking here.
You may also express your thought below through the comment section. You may also follow us on Facebook, on Instagram @Insideracingnation or subscribe to our YouTube channel.