The GP of Argentina last April 8, 2018 had plenty to offer, even before the lights went out; a delayed start due safety concerns as weather conditions changed and many riders wished to switch tires, meant tensions were running high. However, this did not impact on the focus of Alex Rins and Andrea Iannone and the pair made good starts from their newly formed grid positions. 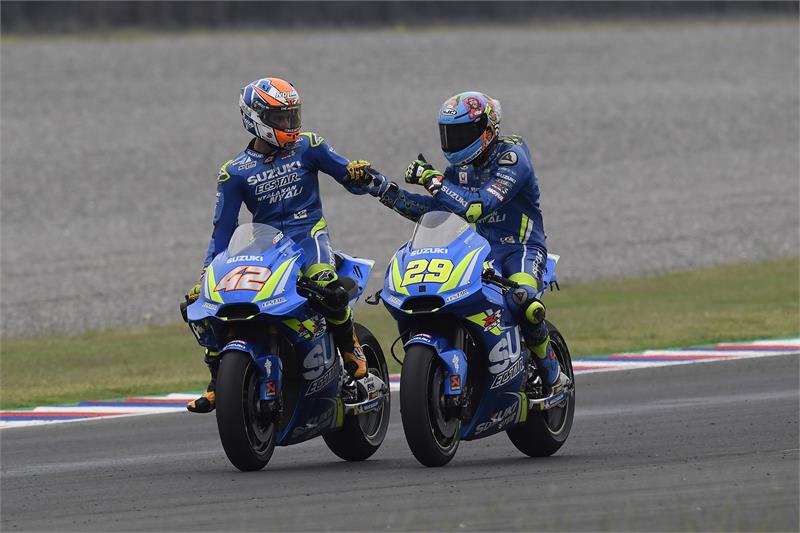 Alex Rins was able to slot into 5th place in the opening moments of the Grand Prix, and as he was settling into his race rhythm he gained and lost some positions as the battle was getting fierce. Alex stayed with the small lead group and attempted to take to the front several times before briefly making it stick with 9 laps to go, spectacularly smoking his rear tire as he did so. With mixed track conditions and drama happening all around him, the 22-year-old kept his concentration and rhythm and entered the last lap in 3rd place, a position which he brilliantly held until the chequered flag. This marks his best ever result in MotoGP. 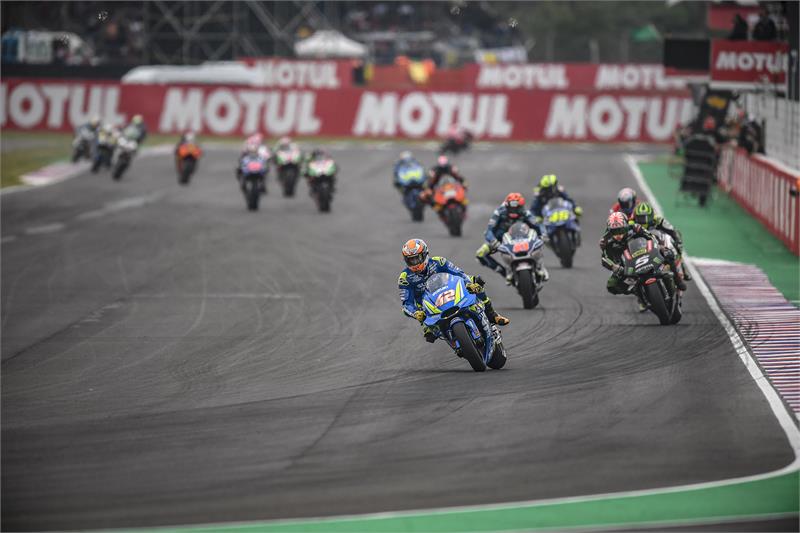 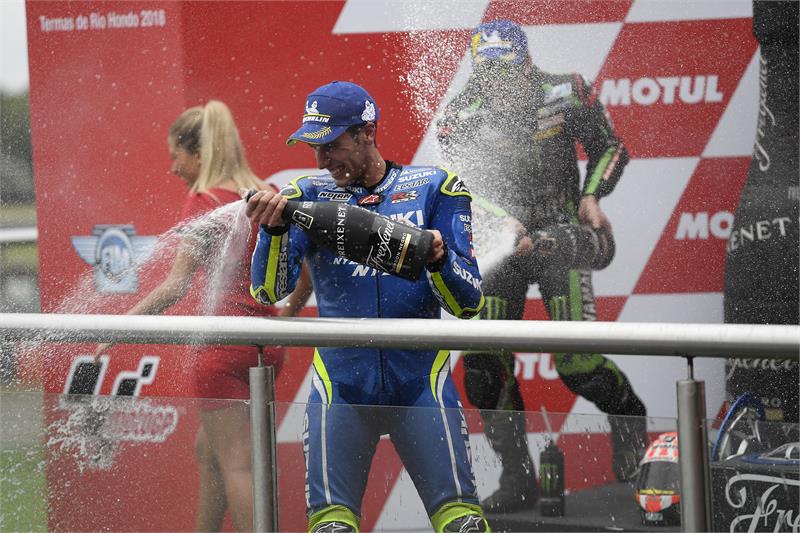 Andrea Iannone was able to make good progress on the opening few laps, passing Smith and Rossi to take 8th place. As the race wore on the Italian lost some ground, but was able to regain positions as others faltered around him. At the end of the race he was able to finish within the Top 10 – a valuable 8th place, and gaining decent points. This was especially important after Andrea struggled with settings during the wet weekend and could not qualify as high as he’d hoped. 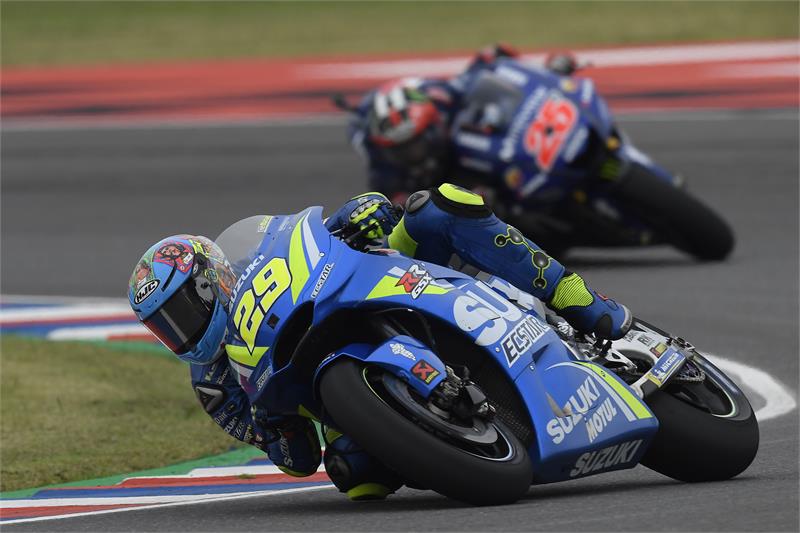 Ken Kawauchi – Technical Manager
“It was a good race and a good fight. We could see how Alex has grown and improved, and I’m very happy. Unfortunately Andrea, due to the bad qualifying position, couldn’t show his best performance, but he still finished in the Top 10. This race has been very good for the team, and we will continue to grow with Alex and Andrea and keep pushing for even higher positions.”

Davide Brivio – Team Manager
“Of course this was a very nice race, the first podium for Alex – we have been expecting that. I’m very happy, not only for the podium, but also because Alex was very competitive and fighting at the front for the whole race and trying to win. Despite difficult conditions; the track had damp patches and it was hard to keep the right line, he managed very well today and during the whole weekend. So we took a difficult weekend and managed to make a brilliant podium from it. I think, and I hope, that we can have more days like today. We were competitive in Qatar and also here, so let’s try to keep this trend. I’m sorry for Andrea as he couldn’t push very hard during the race, and now we have to understand how we can improve his feeling and how we can work to bring him closer to the top.” 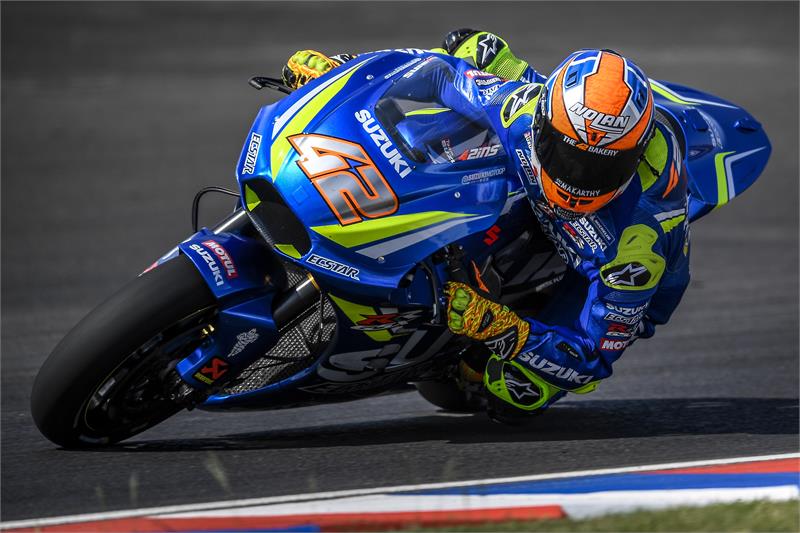 “I’m very satisfied with this race, because it wasn’t easy and before the start I was nervous due to the delay and everything. But finally, when we started, I was feeling really good from the beginning. When I was behind Miller I was thinking ‘OK, maybe I need to overtake him and go’, because my feeling was perfect. But when I was leading I made a small mistake – the track was very difficult with the damp patches, especially off the racing line. Myself, my team, and everyone in Japan has worked really hard to have a competitive bike, and we’ve done it! Texas is one of my favorite tracks, despite the fact that last year I had a fast crash and broke my arm. This year we arrive with strong mentality, more experience, and a great bike.” 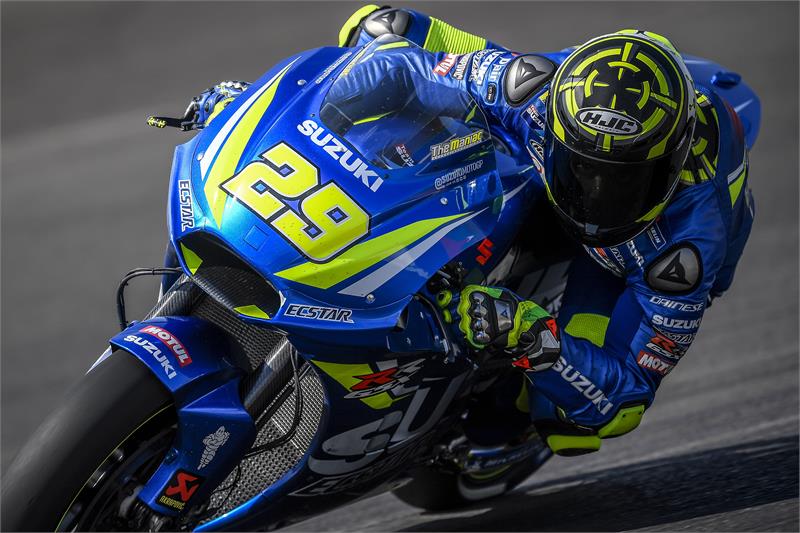 “I was one of the first riders to decide to switch bikes after the first warm-up lap, but unfortunately everybody copied me! I’m joking, but the truth is that in just a few minutes the asphalt and conditions changed a lot. In any case, I didn’t have a good grid position and that disappointed me because I had really good pace during the race when I was closing the gaps to the other riders. But in the end, often when I tried to overtake I made a few mistakes and I think that has been the most difficult thing for me. But I’m really happy for Suzuki and Alex for this podium. And my own result has also been quite good. Me and my team are working well and it’s possible to get to the top. We’ll try our best in Austin!”