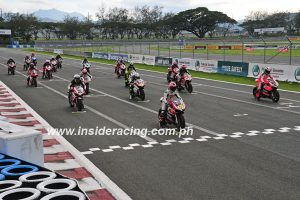 The second round of the 2015 Ducati Cup powered by Bacchus Energy Drink took place at the Clark International Speedway last May 24 and it was young TJ Alberto who topped both Race 1 and Race 2 and won the Intermediate class. TJ also posted the fastest lap time in the Ducati Cup races that day. 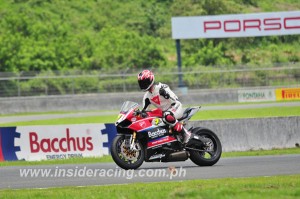 TJ Alberto of Ducati Philippines finished first in both races of the Ducati Cup and is the winner of the Intermediate class in the second leg of the series held at the Clark International Speedway.

Toti Alberto, TJ’s father and one of the prominent figures in motocross and superbike racing, likewise had a great outing as he clinched two classes, the Expert and Masters categories.

The Ducati Cup aims to foster camaraderie among Ducati owners as they hone their skills in the racetrack while having a friendly competition. The third leg will be held on July 5 also at Clark.
More details and pictures will be published in InsideRACING Volume 13 Number 6.