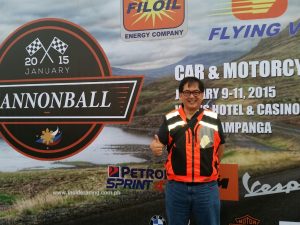 The first major endurance ride event of 2015 will start tonight Januaty 9 from WIDUS Hotel and Casino in Clark Pampanga.  The North Luzon Loop endurance ride organized by endurance  legend rider himslef Joey Almeda will see 520 particpants conposed of 120 cars 400 bikes tackle beautiful scenic amd winding roads. The event itself is composed of the Cannonball i and Cannonbal 500 for small bikes.

The Cannonball 1000 is open to all cars and motorcycles with displacements of 301 cc & above to ride along the scenic North Luzon loop. The Cannonball 1000 will flag-off from Widus Hotel & Casino in Clark and will pass through towns such Baloc, Ilagan, Tuguegarao, Aparri, Pagudpud, Laoag, Vigan, La Union, Baguio and Tarlac before coming full circle to end again in Clark. All participants are challenged to undertake a route of over 1000 kilometers under a time limit of only 24 hours.

Equally as tough and demanding as the Cannonball 1000, the Cannonball 500 boasts of an opportunity to provide scooters, underbones and smaller displacement motorcycles a chance to ride along their very own version of the North Luzon loop. The course of approximately 500 kms  will also start and end in Widus Hotel & Casino in Clark, and pass through Gerona, Baloc, and Aritao, up Baguio and through Urdaneta before finishing. The challenge is for the bikes to complete this route in under 12 hours.