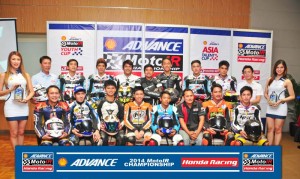 The 2014 Shell Advance MotoIR Championship Presented by Honda had its Team Presentation and Media Launch last April 22 at the SMX Convention Center of SM Aura in Taguig. Aside from the presence of MotoIR riders and members of their respective teams, several representatives from the major players of the motorcycle industry graced the event.

After some introduction about the 2014 MotoIR Championship, its history, rules and other details by no other than its creator, Mr. Al Camba, each team competing in this year’s series was presented on stage. Ralph Kenneth Torres, the only Filipino rider in the Shell Advance Asia Talent Cup and Koko Tadachi who represents the country in the Honda Asia Dream Cup were also introduced.

The MotoIR Championship started in 2012 and since then has been continuously growing and improving. It became instantly popular as it provided an affordable step-up from underbone and scooter racing using a spec race bike based on a fuel-injected Honda CBR150. It was warmly received by riders, teams and race fans as it gave them the chance to experience a GP-style race event. 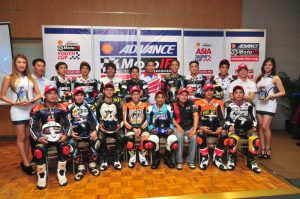 The series has come a long way from its first year wherein 5 riders participated and on its second year in 2013 wherein 14 riders joined. Rizaldy Canare from Bataan clinched the first ever championship in 2012 and managed to defend the title in a much more competitive 2013 season. In 2013 a new race class was established, the MotoIR2 for beginner riders who joined the competition and it was Juver Mirasol who claimed the first ever MotoIR2 championship. A tire championship was also held and FDR Tires was hailed as the winner.

This year the MotoIR Championship proudly has 22 riders competing for glory and supremacy. 2014 also marks a new milestone for the series as it welcomed new title sponsor Shell Advance Motorcycle Oils and presenter Honda Philippines. Aside from the main MotoIR class, the battle for the MotoIR2 title and tire championship are something to look forward to. Another highlight of this year’s MotoIR Series is the Shell Advance MotoIR Youth Cup (SAMYC) class wherein the top 5 will qualify for the Philippine Shootout in Carmona. The top two in the shootout will have a guaranteed slot in the Shell Advance Asia Talent Cup Shootout in Sepang, Malaysia in October this year. The SAMYC is open only for MotoIR2 riders with ages 14-18 years.

The MotoIR Championship is sanctioned by the Underbone and Scooter Racing Association (USRA). It runs together with Philippine Motorsports Championships held at the Batangas Racing Circuit and Clark International Speedway and IR Cup Series at the Carmona Race Track. MotoIR is also a much anticipated category in the prestigious InsideRACING Grand Prix. Sponsors of the series are Racing Boy, FDR Tires, Bridgestone Tires and Vee Rubber Tires. Its media partners are Stoplight TV, Motorsiklo Xklusibo, PinoyXtreme Channel, Inside Motoring, PinoySpeed, InsideRACING, Maximum Torque, The Racing Line and Motorcyclephilippines.com.