The Portuguese GP, held at the Autódromo Internacional do Algarve in Portimao, will remain a memorable event in the history of Ducati in MotoGP; after 13 years since its first success in 2007, the Bologna-based manufacturer has won its second Constructors’ World Title in the Premier Class in the final round of the 2020 season. 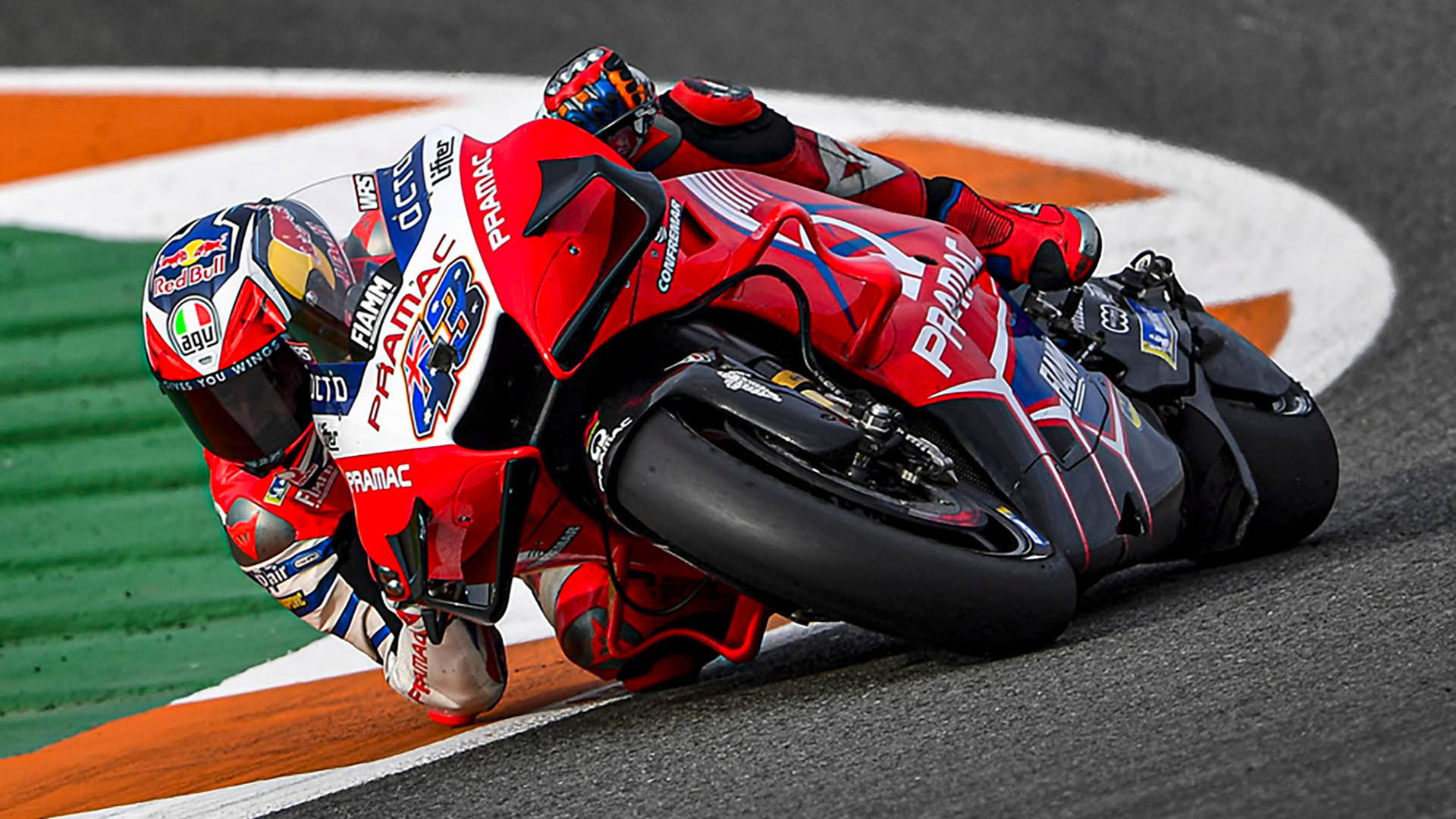 Thanks to Jack Miller’s (Pramac Racing Team) second place taken on the last lap, the Borgo Panigale manufacturer was able to end on top of the standings with 221 points a difficult season, made even more challenging by the Covid-19 emergency. 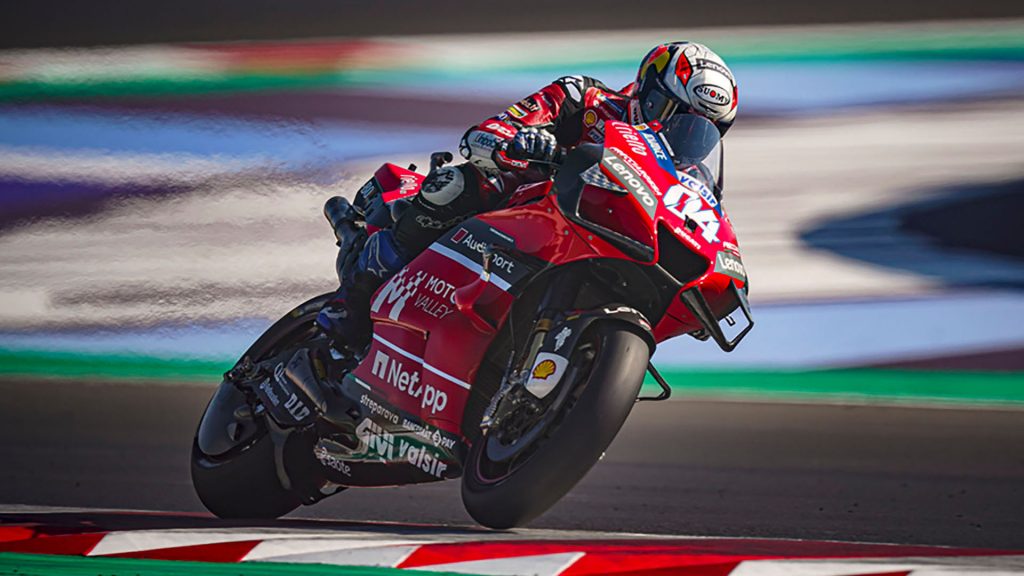 Ducati Team riders Andrea Dovizioso and Danilo Petrucci, Pramac Racing Team riders Jack Miller and Francesco Bagnaia and Johann Zarco, the standard-bearer of the Esponsorama Racing Team are the riders who contributed with their placings to the achievement of this goal. Among the most important results taken by the five riders with the Ducati Desmosedici GP bikes, there are undoubtedly Dovizioso’s victory at the Austrian GP in August and his third-place taken at Jerez, Petrucci’s success at Le Mans in a tricky wet race, the four podiums obtained by Miller in the Austrian GP, the Styrian GP, the penultimate round in Valencia and Portimão, Bagnaia’s second place at his home track in Misano Adriatico and Zarco’s third place in Brno. 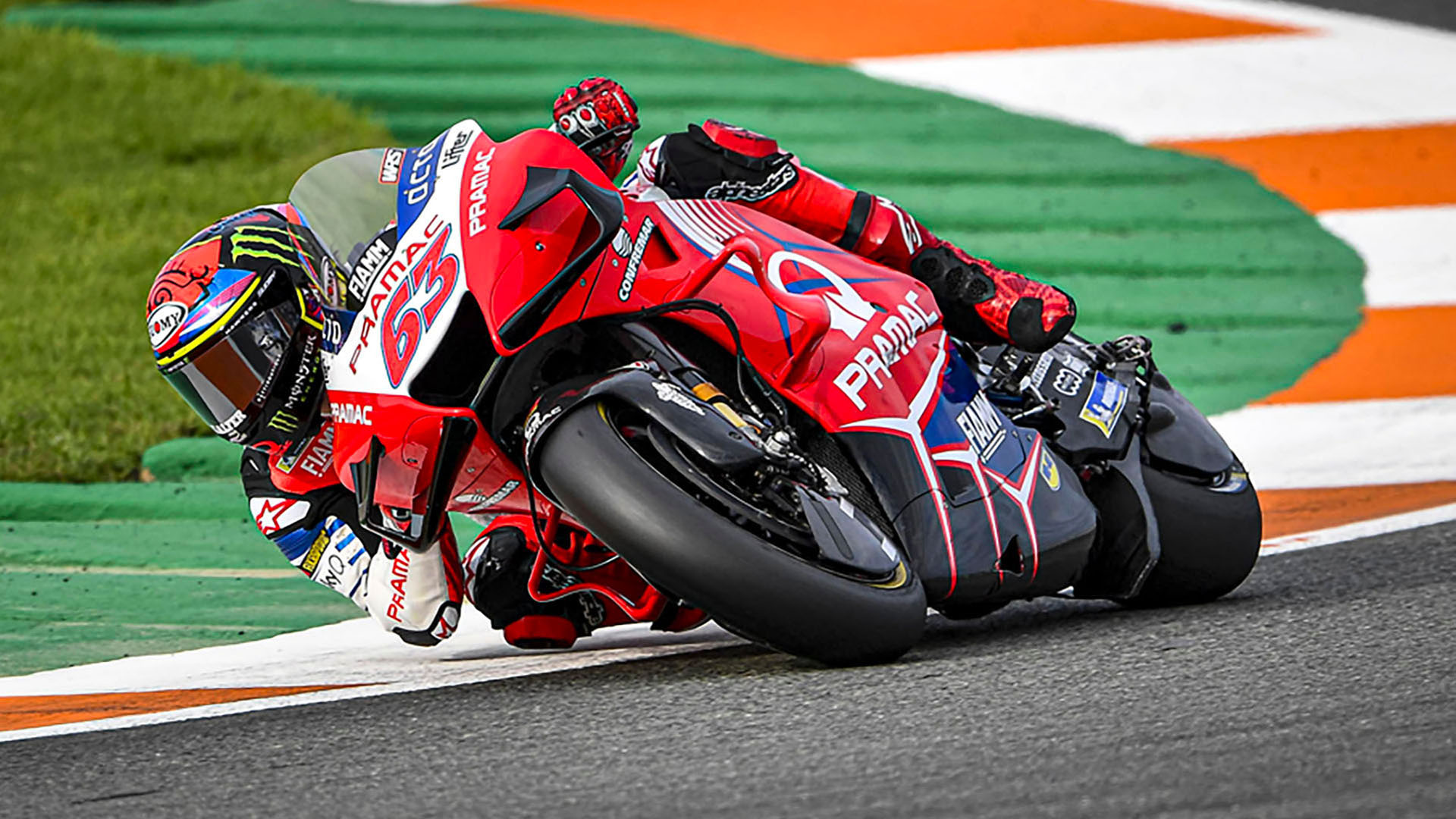 In addition to Ducati’s success, it was Andrea Dovizioso’s emotional last race aboard the red machine from Borgo Panigale after eight seasons, which saw him finishing second in the Championship for three years in a row (2017-2018-2019), and taking a total of 14 wins, 40 podiums and six pole positions with the factory team. At Portimão, a track introduced on the MotoGP calendar this year, Andrea was the protagonist of a good performance: starting from twelfth on the grid, the rider from Forlì found immediately a good pace that allowed him to rejoin the battle for fifth towards the end of the race. Dovizioso crossed the finish line in sixth place, scoring important points for the Standings which see him closing the 2020 season in fourth place, just 4 points behind Rins in third place. 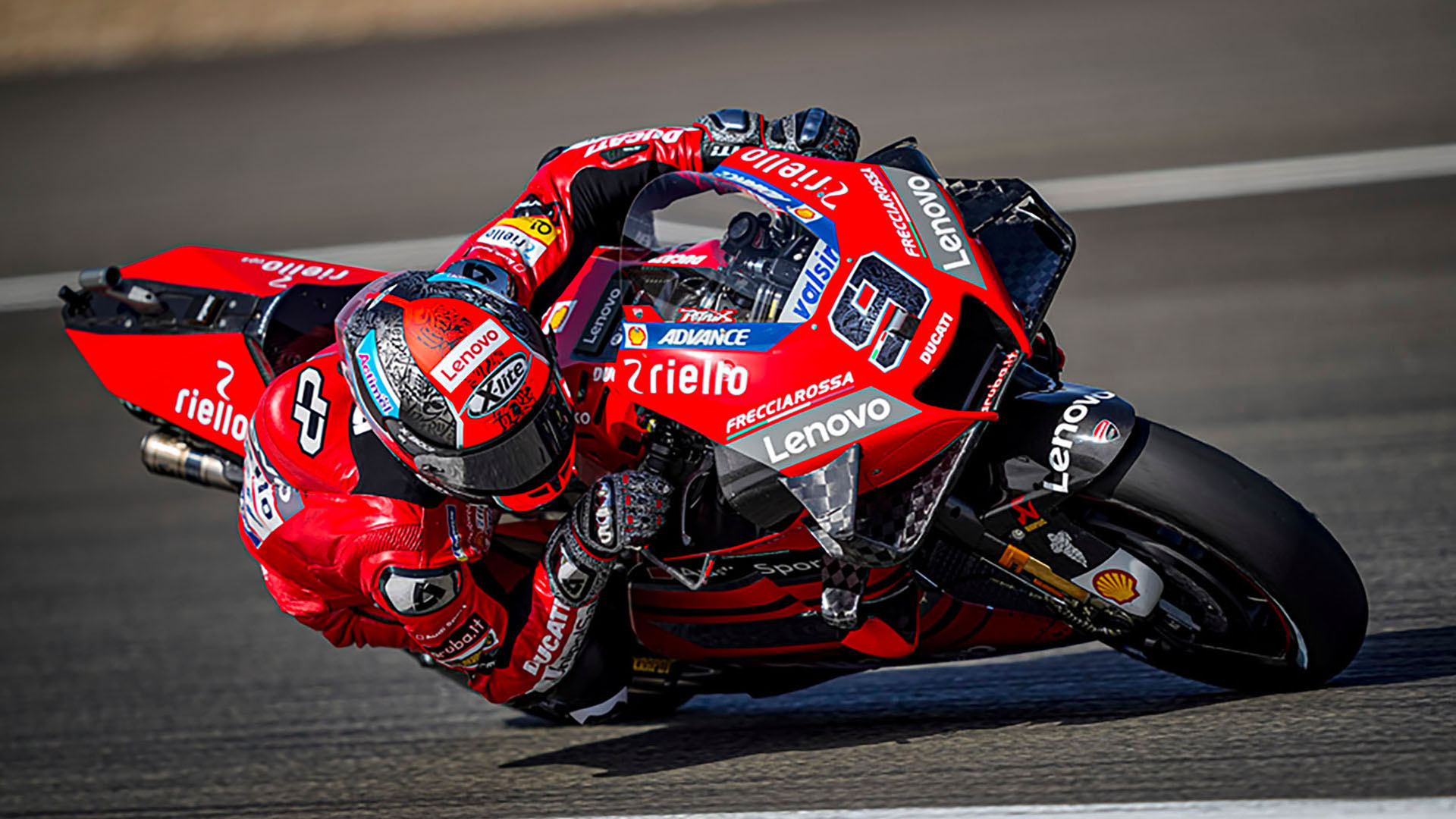 Also for Danilo Petrucci, it was his last GP after two years with the Ducati Team and four with the Pramac Racing Team. Six seasons aboard the Ducati Desmosedici GP full of emotions, like the extraordinary victory at Mugello last year and the second success in MotoGP taken this year in France. After starting from eighteenth on the grid, Danilo closed a difficult race in sixteenth place, while, in the overall standings, Petrucci closes the 2020 season in twelfth position overall with 78 points. 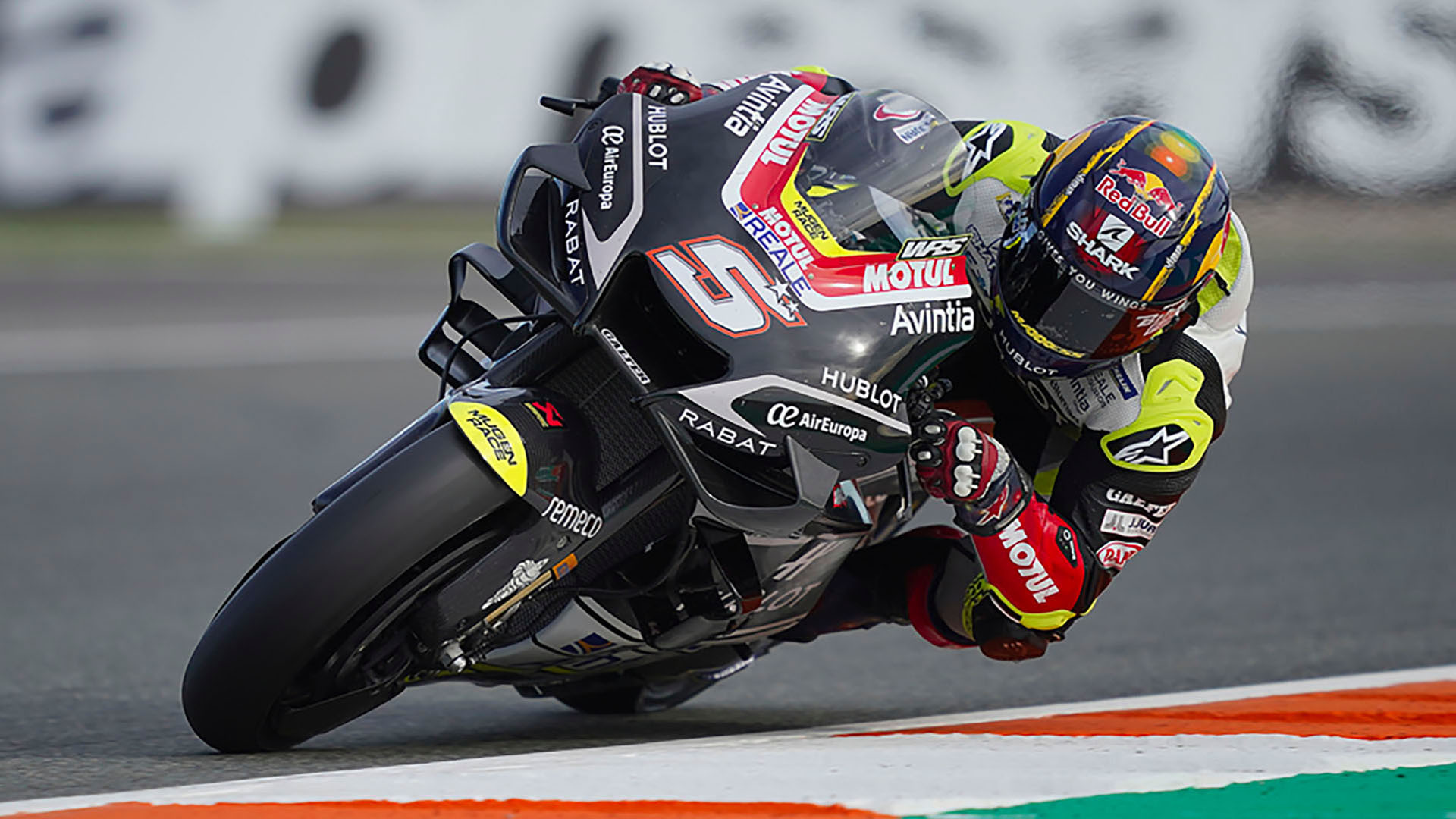 In the team classification, the Ducati Team closes in fourth place with 213 points.

Andrea Dovizioso (#04 Ducati Team) – 6th
“It certainly wasn’t an easy race today starting from twelfth on the grid, but I’m happy because we managed to make a good comeback and finish ahead of some of our direct rivals in the Championship, reaching fourth place in the standings, which was our main goal. It was my last race with Ducati: in the last four years we have been able to do something extraordinary, and I never thought I would be so excited to see the joy that our results have been able to produce in our fans! It’s the magic of our sport, and I’m happy to have experienced it! After these eight seasons, there have been wonderful relationships within my team, which I will surely miss very much!”

Danilo Petrucci (#9 Ducati Team) – 16th
“I would have liked to have ended my adventure in Ducati with a better result, but unfortunately it was a tough race. I want to thank all the people who work in Ducati, first of all to my team, because during these six seasons on the Desmosedici GP bike I have been able to achieve several successes and two victories in MotoGP! I’m happy to have been part of Ducati in these six years of my career”.

Claudio Domenicali, CEO of Ducati Motor Holding
“Winning the Constructors’ World Title is very rewarding, especially after a year so complicated that has forced us to overcome obstacles and situations we had never experienced before. It has been a bizarre season, but working together our engineers and all the Ducati riders have managed to make the Desmosedici GP competitive on all the circuits on the Championship calendar, taking it on the podium on eight occasions, including two wins. Thanks to Andrea Dovizioso, Danilo Petrucci, Jack Miller, Pecco Bagnaia and Johann Zarco for allowing us to add a second Constructors’ World Title to our MotoGP history. And thanks also to the entire Ducati Corse department for once again demonstrating that with passion, dedication and determination, you can achieve important results like this. I take this opportunity to wish Andrea and Danilo good luck for what the future holds. They have been with us for many years, and together we have lived great moments, thanks for everything”.

Luigi Dall’Igna, Ducati Corse General Manager
“Winning the Constructors’ World Title is certainly an important goal for Ducati because it demonstrates the goodness of the technological innovations that have been developed in recent years and that today are on the Desmosedici GP. It has certainly been a difficult season, especially after the introduction of the new rear tyre and the impossibility to do tests during the year that would have allowed us to study better its behaviour. Despite this, the Desmosedici GP has been a competitive bike on almost every track. Therefore, we are satisfied with the results obtained in this 2020 and that have allowed us to reach our second Constructors’ World Title in MotoGP. Thanks to all the Ducati Corse staff, riders and teams, that with their work and commitment have allowed us to achieve this important victory”.