In the ninth and final episode of the Ducati World Première 2022 web series, Ducati unveiled the new Panigale V4 SP2 to enthusiasts: a special motorcycle in a numbered series, designed to fully embody riders’ passion for the track, while further raising the performance of the Panigale V4. 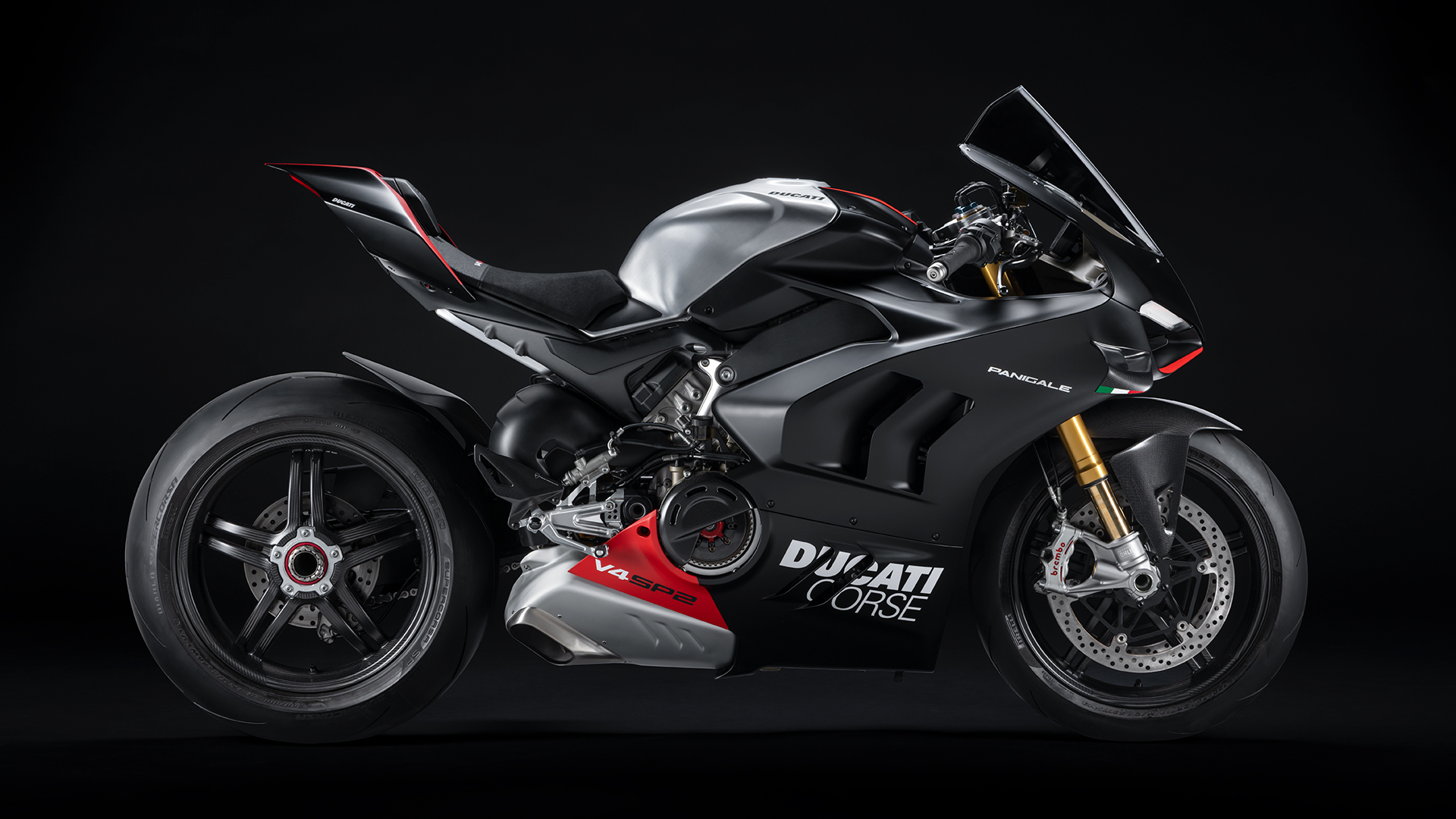 The Ducati Panigale family is the maximum expression of the continuous exchange of information and technology from the world of racing to production bikes, and with each new version it continues its evolution year after year, just as happens with the Ducati Corse prototypes. The “SP2” is the model with which Ducati brings to the peak, the sportiness of the Panigale V4, the 2022 version of which has taken the most significant evolutionary step since its inception, improved in every aspect: aerodynamics, ergonomics, engine, chassis and electronics. The Panigale V4 SP2 stands out for its equipment with the typical technical specifications of the abbreviation “SP” (Sport Production) which is combined with all the improvements made by Ducati engineers on the Panigale V4 2022, to create the most high-performing Panigale ever. The “SP2” version has an even more powerful braking system, lightweight carbon rims, final drive and dry clutch inherited from the WorldSBK bikes, racing footpegs and a series of carbon components. The bike is also delivered with a kit for track use, which includes billet aluminum caps for the removal of rear-view mirrors,* a kit for removing the license plate holder* and an open carbon clutch cover.* 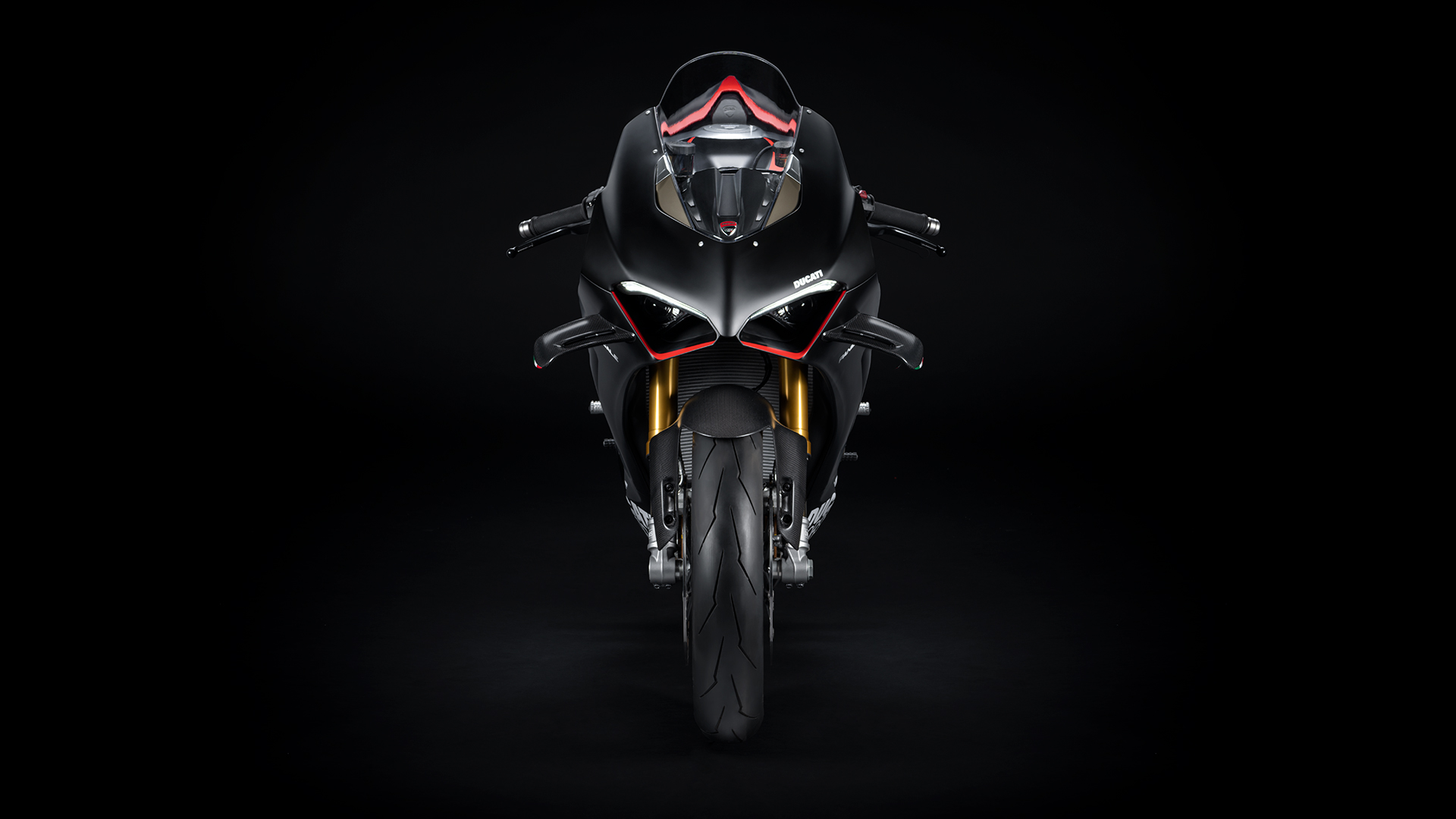 The result is “The Ultimate Racetrack Machine:” a special model, ideal for the non-professional rider who wishes to experience track days that challenge one’s own records. The Panigale V4 SP2 is characterized by the special “Winter Test” livery, in which the matte black of the fairings is combined with the matte carbon finish of the rims and wings, contrasting with the bright red accents and brilliance of the exposed, brushed aluminum tank. The wings with double profile design are embellished with the Italian flag, which also appears on the official Panigale V4 R SBK. The lower part of the fairing is distinguished by the presence of the Ducati Corse logo in the area of ​​the new hot air extractors and by a red detail bearing the name of the bike, also present on the black saddle in double material. The steering head is machined from solid and shows the progressive number of the motorcycle, making each model unique. 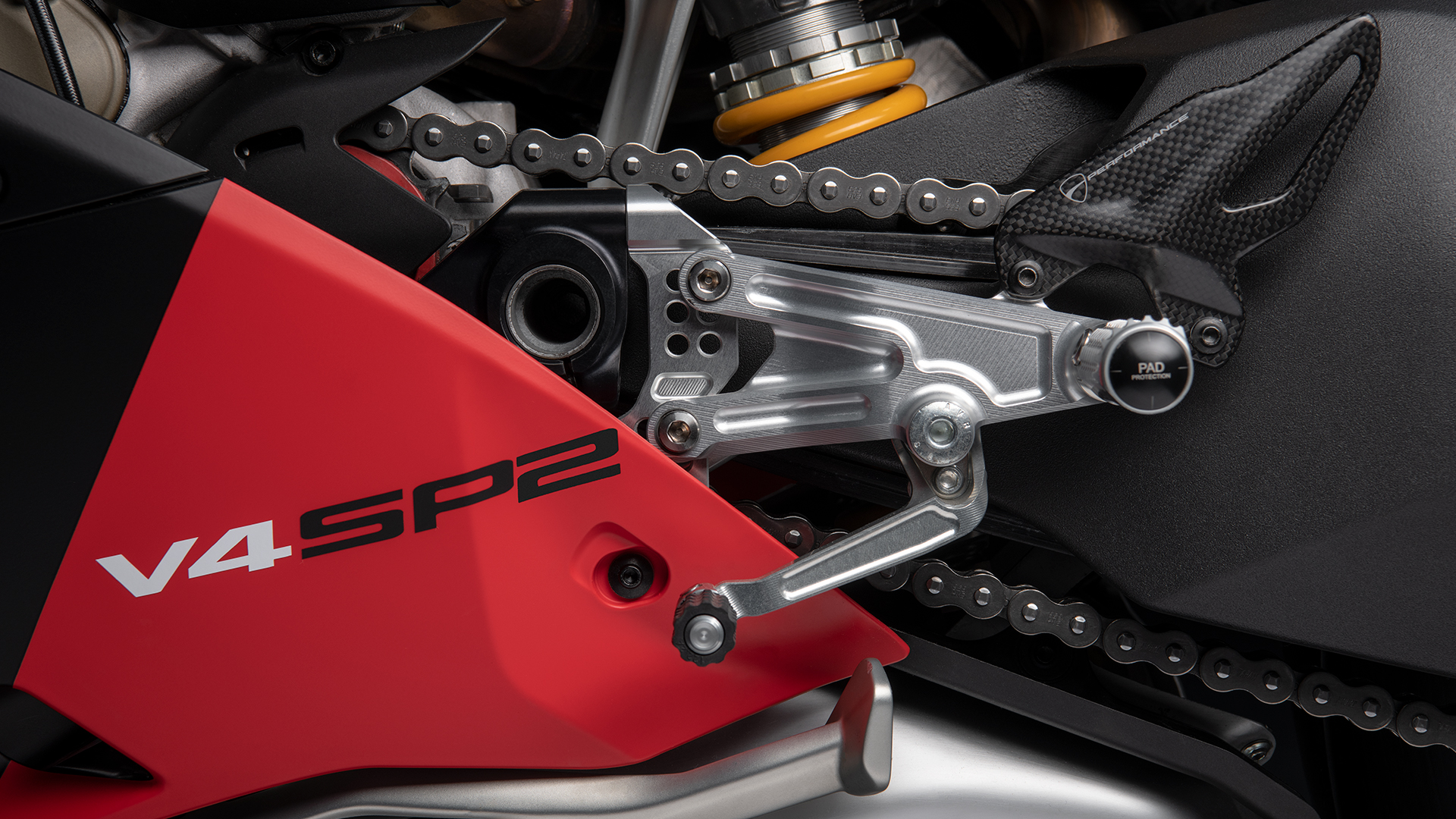 The heart of the bike is represented by 1,103 cc Desmosedici Stradale MotoGP-derived engine which has undergone a series of updates. The Desmosedici Stradale completes a further evolution for 2022, thanks to the introduction of dedicated technical elements that allow superior performance on track with an instant response to throttle requests. Thanks to these interventions and new dedicated mapping, the Desmosedici Stradale delivers 210 hp at 12,500 rpm. The engine also delivers torque of 90.6 lb-ft at 11,000 rpm. To capitalize on the full potential of this engine, dedicated gear-by-gear torque curves and four different Power Modes (Full, High, Medium, Low) have been developed by Ducati. The Full and Low configurations are newly developed, while the High and Medium configurations use a new strategy. When used on the track, the performance of the Desmosedici Stradale can be further improved with the new full titanium Ducati Performance racing exhaust, developed in collaboration with Akrapovič and available as an accessory. 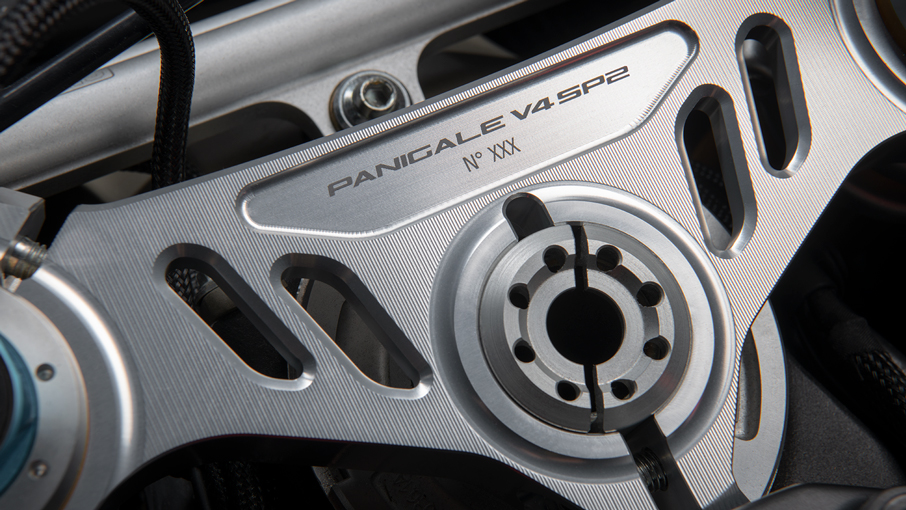 This exhaust is equipped with high silencers alongside the tail and has been redesigned to increase performance and limit noise, offering everyone the opportunity to run with a full racing exhaust even in circuits with the most stringent noise limits. With this exhaust the Panigale V4 SP2 is lightened by 5 kg (11 lb) thus taking the dry weight of the motorcycle to only 168 kg (370 lb). The Akrapovič exhaust also guarantees an increase in power of 18 hp, bringing the maximum value to 228 hp, while the maximum torque value rises to 131 Nm (96.6 lb-ft). The connection to the bikes that race in the Superbike World Championship is even more evident in the “SP2” version of the Panigale V4. In fact, there has been added to the more “track-oriented” gearbox already present in the Panigale V4 2022 a lightened final drive with 520 chain and STM-EVO SBK dry clutch. This clutch guarantees a more effective anti-hopping function in extreme use on the track and greater fluidity in all phases of “off throttle” compared to the oil bath clutch of the Panigale V4 S. The STM-EVO SBK clutch also offers the possibility to customize the “mechanical” engine brake level by choosing a different secondary spring from those available in the Ducati Performance accessories catalog. 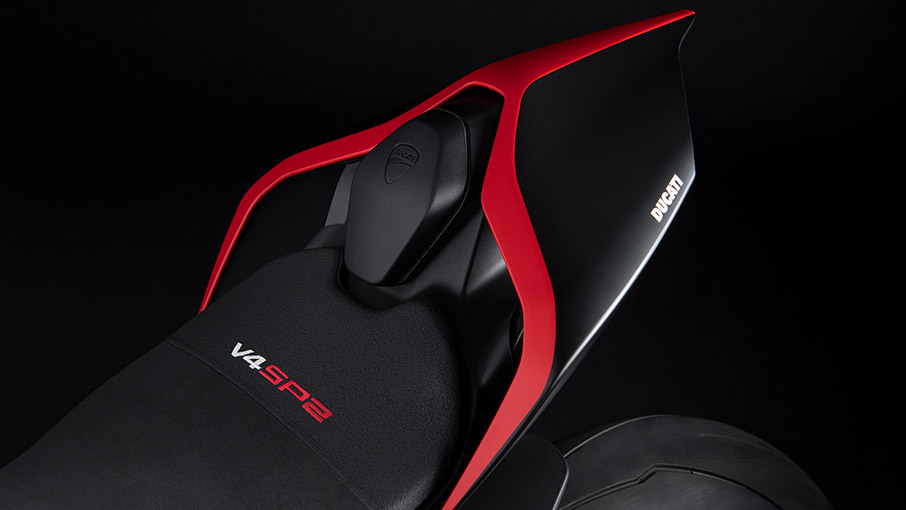 The chassis of the Panigale V4 SP2 includes an aluminum front frame that uses the Desmosedici Stradale as a stressed element. The aluminum swingarm and the seat post in shell-cast aluminum are directly connected to the engine. The pivot of the swingarm is positioned in such a way as to increase the anti-squat effect, which is the reduction of the sinking of the rear when exiting corners and when reopening the throttle, thus stabilizing the bike in acceleration. The suspension system features an electronically controlled 125 mm (4.9 inch) travel Öhlins NPX25 / 30 pressurized fork at the front that uses a pressurized cartridge damping system derived from that of racing forks. This fork, in combination with the Öhlins TTX36 shock absorber and with the electronic steering damper, also Öhlins, forms the second generation of the Smart EC 2.0 system characterized by OBTI (Objective Based Tuning Interface) logic which, working “by objectives” and not by clicks, allows the rider a much more intuitive management than traditional systems. 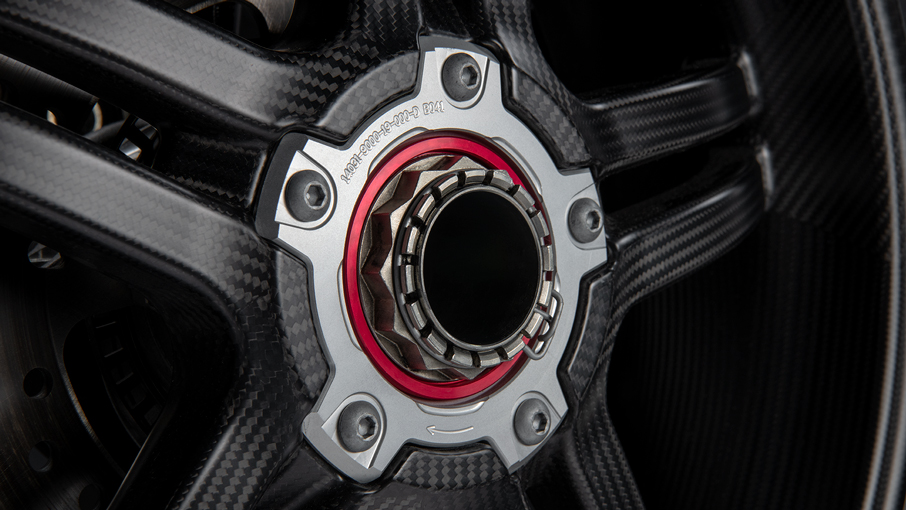 To further enhance the performance on the track and the dynamic qualities of the Panigale V4, the “SP2” version is equipped with high-quality 5-split spoke carbon wheels, 1.4 kg (3.1 lb) lighter than the aluminum forged ones of the Panigale V4 S. The carbon rims guarantee a significant reduction in inertia (-26% at the front, -46% at the rear) to the benefit of agility, lightness in direction changes and greater ease in closing the curves. 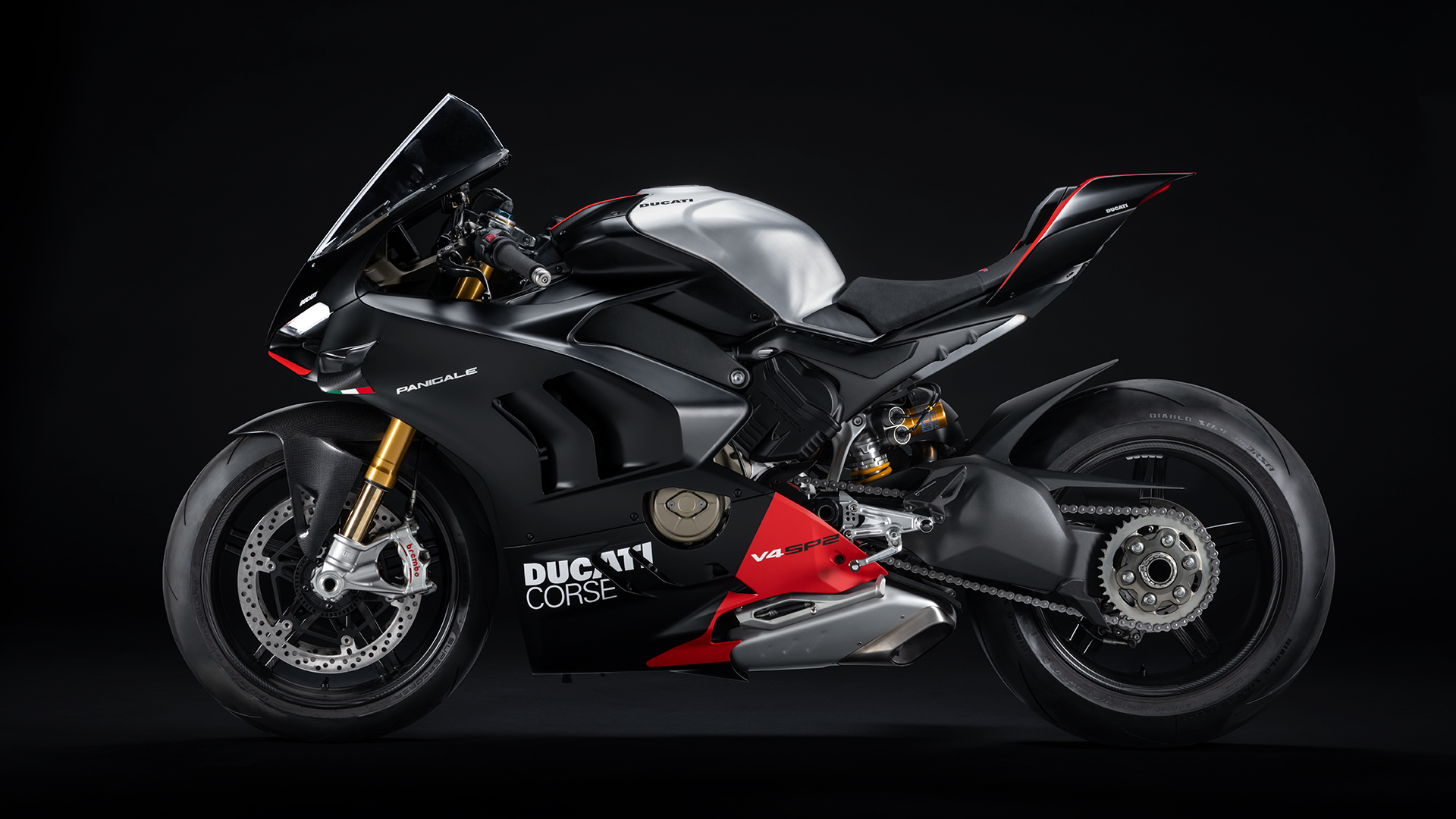 The Panigale V4 SP2 is also equipped with exclusive Brembo Stylema R® front brake calipers, which guarantee high braking power combined with exceptional consistency of performance even during a lengthy timed session without changes to the travel of the brake lever. The calipers are operated by a Brembo MCS (Multiple Click System) radial pump that allows you to adjust the wheelbase quickly and easily on three configurations to customize the braking feeling. The front brake lever is equipped with a “remote adjuster” device, which allows you to adjust its position by a knob on the left grip, as is the case on racing bikes. Finally, on the “SP2” version the brake and clutch levers are milled at the ends to reduce air resistance. Another essential element that characterizes the Panigale V4 SP2 is Rizoma footpegs in anodized aluminum with carbon fiber heel guards. The footpegs are fully adjustable and maximize ground clearance for more effective use on the track. These racing footpegs offer great grip for the boots, essential for riding at the limit on the circuit, further contributing to a completely redesigned ergonomics in 2022 with new tank and saddle shapes, studied to improve control and make the most of the performance of the Panigale V4 both on the flying lap and during a prolonged session. The Panigale V4 SP2 has an electronic package that includes controls that manage all the riding phases, whose operating parameters are linked by default to the four Riding Modes (Race A, Race B, Sport, Street). 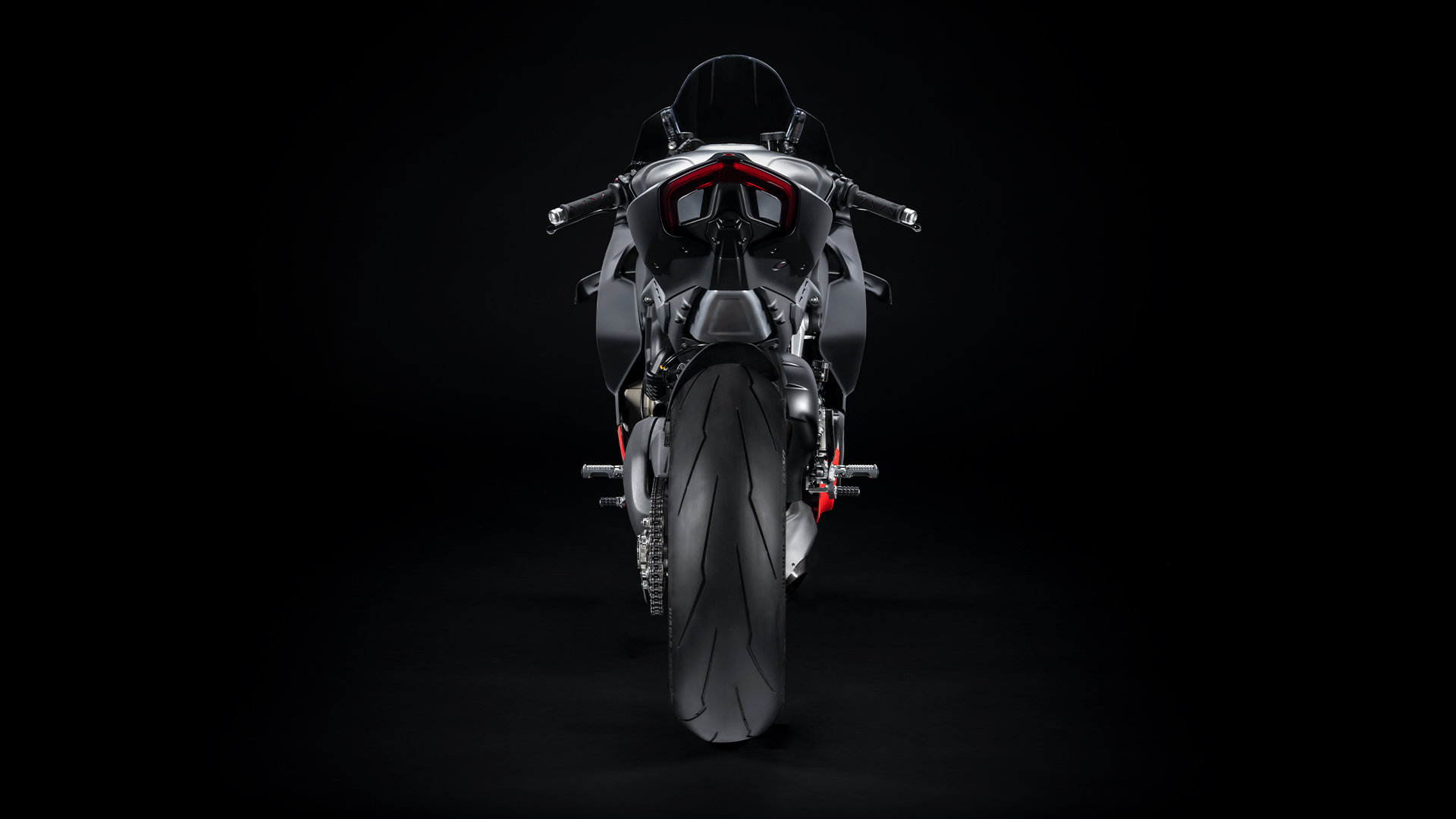 All the electronic parameters of the bike can be clearly seen thanks to the dashboard and to the “Track Evo” display mode, derived from the one used in MotoGP. In this screen, the tachometer moves on a horizontal scale positioned in the highest part of the instrument, or the most visible, and the indication of the gear engaged is in the center of the screen. In the right area of ​​the display there are four different colored sectors, each dedicated to an electronic control (DTC, DWC, DSC, EBC). These sectors light up individually when the electronics are working on a certain parameter, remaining on for the time necessary for the rider to identify which indicator is activated. This signaling mode facilitates the rider’s task in understanding the control that has worked to allow him to intervene in a more precise and timely way on the choice of optimal level and to achieve better performance more quickly. The left sector completes the information with the chronometer, number of laps completed and speed. On the “SP2” version, the GPS module is standard, thus allowing the activation of the automatic Lap Time function, which instantly provides the indication of two split times of the track on which you are lapping. Furthermore, by loading the Slick Ducati Performance Software (available as an accessory), Ducati Traction Control curves expressly developed for slick and rain tires are available and the possibility of memorizing the coordinates of five different tracks is activated, as well as five additional fully customizable Riding Modes. Finally, thanks to the Ducati Data Analyzer, standard on the SP2, it is possible to conduct an in-depth analysis of all performance data. 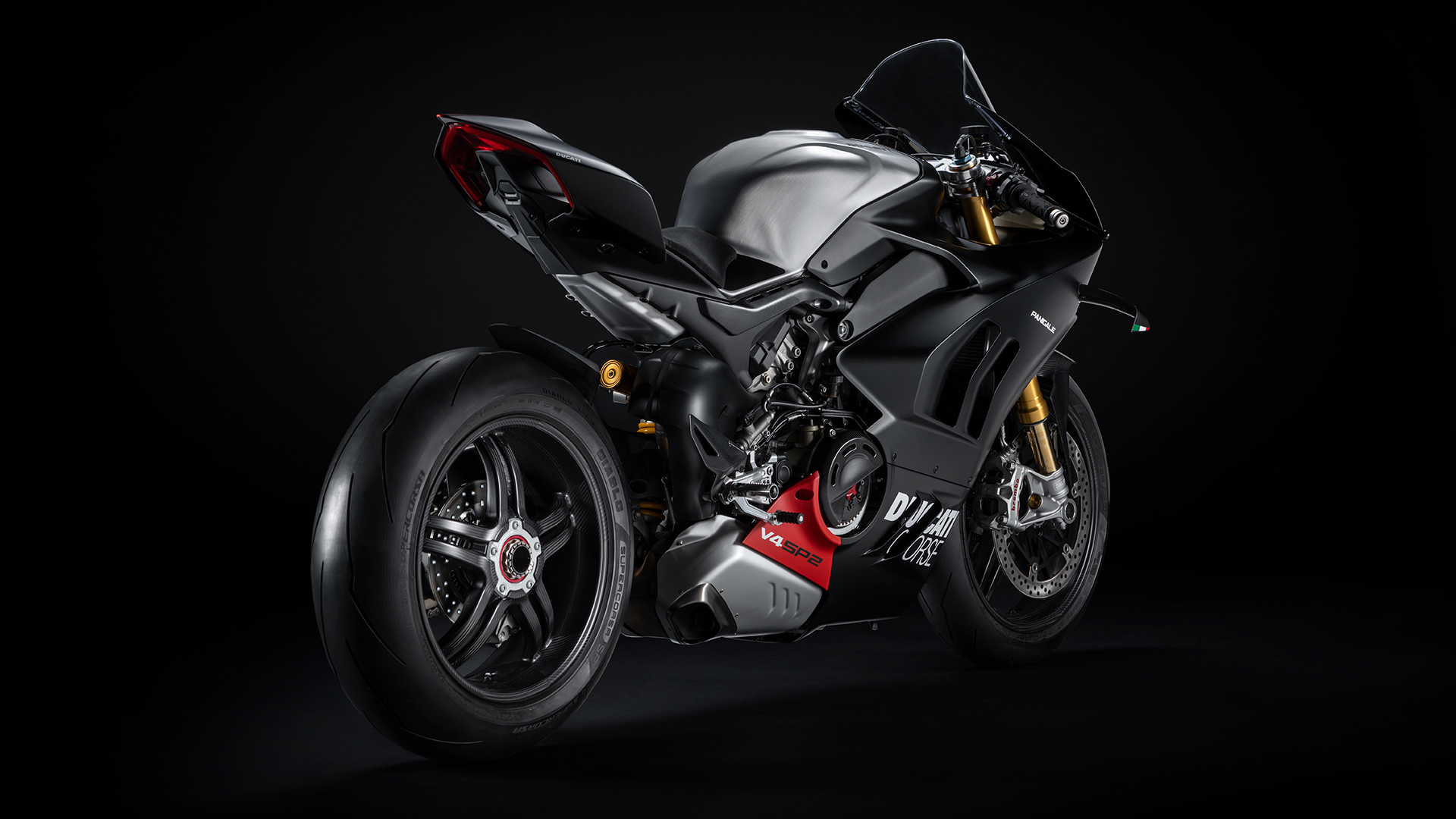 Thank you for visiting insideracing.com.ph. While you are here, kindly don’t forget to click on our advertiser ads above, visit their site and consider them for your motorcycling needs. It will help us a lot.
You can also order a copy of our monthly print magazine for more riding contents to read and enjoy at your leisure anytime by clicking here.
You may also express your thought below through the comment section. You may also follow us on Facebook, on Instagram @Insideracingnation or subscribe to our YouTube channel.