The Ducati World Première web series continues, starting February 17 with three new presentations that will complete the Ducati range for 2022.

The new episodes of the web series will be visible on the dedicated page of the Ducati.com website and on YouTube, where a “Best of” video of the episodes already published is available.

Ducati announces the dates of three new appointments of the Ducati World Première 2022 web series. The episodes with which the Bologna-based motorcycle manufacturer will complete the presentation of its 2022 model range will be published on Thursday 17 February, Thursday 3 March and Thursday 10 March at 4.00 pm (CET) on Ducati.com and on Ducati’s YouTube channel. 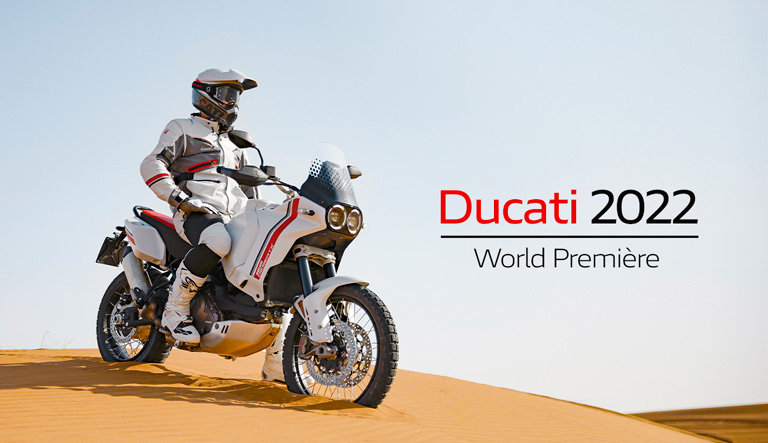 In July 2021, the special episode dedicated to the Panigale V2 Bayliss 1st Championship 20th Anniversary was the start of a journey consisting of seven exciting episodes, which made motorcyclists from all over the world dream, until the culminating moment with the presentation of the long-awaited DesertX: the bike created to enhance the adventure thrill without setting any limits. In the first part of the 2022 web series, Ducati presented 9 models: in addition to those already mentioned, the new products in the range are the Multistrada V2, the Ducati Scrambler Urban Motard and 1100 Tribute PRO, the Multistrada V4 Pikes Peak, the Streetfighter V2, the Streetfighter V4 SP and the Panigale V4 2022. All these new models can already be ordered from the Ducati dealer network.

This online presentation method, introduced starting from 2021, is part of the digital project with which Ducati is experimenting with new forms of interaction with the public from all over the world. The episodes were made available with subtitles in 6 languages (Italian, English, German, French, Spanish and Japanese) and in the period between September and December they generated approximately 5 million sessions on the Ducati website and more than 80 million impressions on the various social media channels of the Bologna-based company.

Patrizia Cianetti, Ducati Marketing and Communications Director: “Authenticity is one of the essential characteristics of the Ducati brand. It is for this reason that the protagonists of the presentation videos of the new models in the range are precisely the people who think, devise, design and test these models here in Borgo Panigale. We are convinced that no one else could present the details of Ducati projects better than those people who actually work on them with dedication and passion throughout the whole year. The Ducati World Première web series, exploiting the power of digital channels, allows us to reach the large community of Ducatisti from all over the world, creating new opportunities for interaction and dialogue and overcoming the geographical and organizational barriers that have continued to remain so relevant in recent months.”

The three unreleased episodes of the web series will be visible on the dedicated page of the Ducati.com website and on Ducati’s YouTube channel, where the video “Ducati World Première 2022 – Best of” is also available: a special content that is a compilation of the best moments of the episodes already published (find the direct link here).

Below is a recap of all the episodes already published during the Ducati World Première 2022 web series:

Twenty years after winning the 2001 Superbike World Championship, Ducati pays homage to Troy Bayliss with a special version of the Panigale V2. This celebratory bike is characterized by a dedicated livery that recalls that of the Ducati 996 R with which Troy won his first title, by the equipment with Öhlins components and by the details that enhance its sportiness.

The Multistrada V2 represents the new gateway to the Ducati Multistrada universe: a comfortable twin-cylinder bike, fun to ride, versatile and technologically advanced. The Multistrada V2 is 5 kg lighter and with improved ergonomics over the previous version, and it is the perfect bike to experience the pleasure of travelling every day.

The Scrambler Ducati “Land of Joy” expands in 2022 with the addition of two new bikes. The Ducati Scrambler 1100 Tribute PRO was created to pay homage to the history of the air-cooled twin-cylinder engine, fifty years after it was first introduced on a Ducati. The Ducati Scrambler Urban Motard is a model with a contemporary look, designed for the youngest enthusiasts in the Ducati Scrambler family and for all those looking for an easy, fun and sporty bike.

The new V4 Pikes Peak is the sportiest Multistrada ever. Developed to take the sporting qualities of Borgo Panigale’s dual bike to the extreme, the V4 Pikes Peak stands out not only for its new MotoGP-inspired livery MotoGP, but also for a dedicated riding position, 17″ wheels with sports tyres, single-sided swingarm, Öhlins suspension and the brand new Riding Mode Race.

The Panigale V4 family continues its evolution year after year, just like the Ducati Corse prototypes, and with the 2022 version it takes the most significant evolutionary step since its creation, to become even faster on the track and at the same time increasingly intuitive and less tiring for riders of all levels. The Panigale V4 ’22 has improved in every aspect: aerodynamics, ergonomics, engine, chassis and electronics.

The wildest travel dreams of motorcyclists around the world come true with the Ducati DesertX. A bike created to experience the pleasure of adventure and tackle the most demanding off-road with 21″ front wheel, 18″ rear, long suspension travel and ample ground clearance. Powered by the 11° Testastretta engine, the new DesertX guarantees a comfortable, easy and safe ride on all types of roads thanks to a major attention to ergonomics, careful aerodynamic development and advanced technological equipment. To watch the full episode, click here.