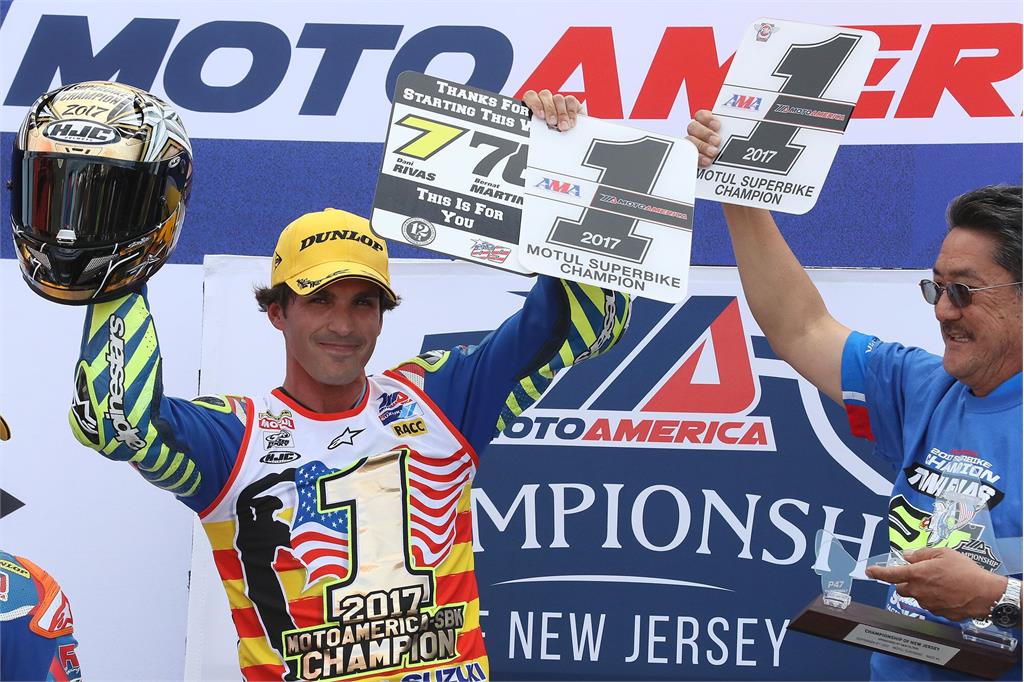 The 34-year-old Spaniard moved to the front eight laps into the 23-lap race and held off Yoshimura Suzuki Factory Racing teammate Roger Hayden at the finish line by 0.039 seconds to win his ninth race of the season and the series victory with three races remaining.

Additionally, Hayden secured second in the championship, giving the new 2017 Suzuki GSX-R1000 a 1-2 result in the machine’s debut season.

Elias, a former Moto2 World Champion, now adds a MotoAmerica Superbike title to his already impressive résumé. He was ecstatic with his victory and championship. He graciously thanked everyone who helped make it possible for him to race in America.

“I am so happy,” said Elias, who becomes the first rider from Spain in the 41-year history of the series to win MotoAmerica/AMA Superbike title. “It was amazing to take the championship by winning. That was the way I wanted to do it, but Roger and Josh (Hayes) were riding so strong it was not easy. I am so thankful to my crew, to Yoshimura and Suzuki for giving me this amazing opportunity,” Elias shared.

Earlier, Hayden won Superpole for the sixth time this season and used the power of his Suzuki GSX-R1000 to set a new motorcycle track record at NJMP at 1:20.378.

It was a great three-way battle for most of the race with Hayden moving up and trying a last-lap draft on Elias on the main straight, but came up a half-bike length short. It was the ninth time this season Yoshimura Suzuki finished first and second.

Suzuki holds the record for the most championship and wins in MotoAmerica/AMA Superbike history. The Suzuki GSX-R is also the all-time winningest motorcycle in the series.

Words and Photo by: www.suzuki-racing.com