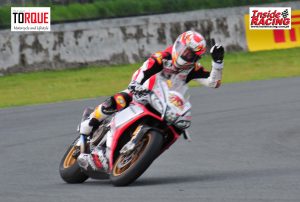 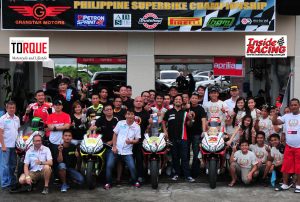 Dashi Watanabe on his Aprilia RSV4 Factory race bike successfully claimed  back-to-back national superbike titles after a thrilling final race of the 2014 Pirelli Philippine Superbike Championships at the Clark International Speedway on October 5. Just like his impressive campaign in the 2013 PSBK season, Watanabe from Valenzuela city once again dominated the series this year, scoring five wins out of six rounds. The only round he didn’t clinch was the fourth race also held in Clark Speedway last August wherein the victor was fellow Aprilia Philippines rider Marvin Mangulabnan.

Raniel Resuello of Ducati Philippines on board the Panigale 1199R, the polesitter for the final leg, led most of the 10-lap race until Watanabe, who was riding wisely and safely at first, overtook him in the famous Acacia corner on the last lap. Watanabe got the championship in the Open class and also topped the Rider of the Year standings. Resuello finished second while Mangulabnan finished third. Anthony Roman who also races for Aprilia Philippines finished fourth. 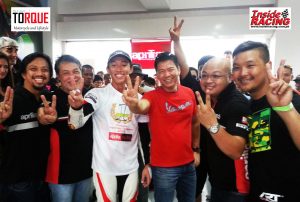 This season was another record for the local superbike championships organized by the BRCA as more riders, teams and manufacturers are consistently on the grid. Granstar team principals Fabian Go, Benson Go, Julian Goitia and Jevis Aguila and the rest of the Granstar team were there to celebrate this milestone  championship for the Italian brand.

Jussi Hoikka on a Ducati was the winner of the Intermediate class while Lawrence Macalinao on an Aprilia topped the Novice group. Despite not winning the last leg, Racewell’s Rizaldy Canare on a 600cc bike bagged the championship in the Intermediate class while teammate Tracy Soyangco on another 600cc bike was the champion in the Novice division. Ducati’s John Defensor was the victor in the Master category and was also the overall champion in the said class.