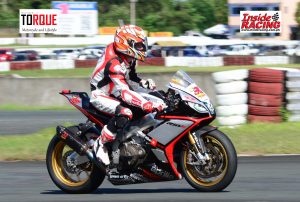 After finishing second to Marvin Mangulabnan in the fourth race held in Clark, Dashi Watanabe of Granstar-Aprilia came back strong in the fifth leg of the Pirelli Philippine Superbike Championships last September 7 at the Batangas Racing Circuit.

Watanabe convincingly topped the Open class and won the race which was red-flagged twice due to crashes of Team Kojie-San’s Charles Nolasco followed by another unfortunate fall down by Mangulabnan. Ducati Philippines-Bacchus’ Rainiel Resuello finished second in the 5-lap race while Castrol-Aprilia’s Anthony Roman finished third. Racewell’s Rizaldy Canare crossed the finished line fourth and was the highest finisher in the Intermediate class. Canare’s teammate Tracy Soyangco also had a good showing and finished fifth, snagging the victory in the Novice category.

In the category of the Masters, the winner was Toti Alberto of Ducati Philippines-Bacchus. Everyone is looking forward for the final round which will be held on October 5 at the Clark International Speedway.