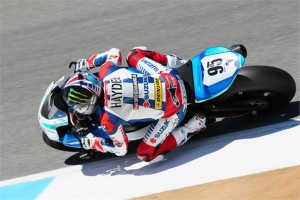 Yoshimura Suzuki Factory Racing celebrated a podium finish on the world stage on Sunday as round four of the AMA Pro Superbike Championships shared the paddock with the World Superbike series at Mazda Raceway Laguna Seca in Monterey, California.

Because of the visiting World Superbike series, the AMA Pro Superbike schedule included only one race, as opposed to the usual two, so Yoshimura Suzuki’s Hayden made the most of his track time: He started the race from the second row of the gird and was vying for a podium spot right off the line. He went on to overtake team-mate Cardenas in third and the two battled mightily, with Hayden eventually pulling away and maintaining the podium spot.

Said Hayden: “My start was pretty good, then I got around Martin and put my head down and started clicking-off some really good laps. I’m really happy with the podium and how my race went. My speed was good, even though we struggled at the beginning of the weekend. Now we have some momentum going to Mid-Ohio, so I have to thank the Yoshimura Suzuki crew; they dug deep this weekend and got my bike working well.”

Cardenas got a great start on his Yoshimura Suzuki GSX-R1000 and slotted into third on the first lap. Over the course of the race, however, he had some issues and was unable to maintain his pace and wound-up finishing fourth.

“We did have a little bit of a problem after a while,” Cardenas said. “And I was losing a bit of time on every lap. Even so, I tried to do the best I could, but the other guys were just a little faster than I was and I ended up fourth. Now we’ll go to Mid-Ohio, where I have had some good results, and see if we can step-it-up a bit.”

Clark got off to a top-10 start and then overtook ninth position before the race’s halfway mark. From there, he made strides to catch up to eighth and also fend-off attackers coming from behind. In the end, Clark held on to finish ninth.

“Honestly, we struggled a bit all weekend,” Clark said. “I just didn’t quite have it today but I just tried to put in a solid race and maximize what we did have. Now I’m looking forward to moving on to Mid-Ohio and going forward with our overall strategy, which should suit Mid-Ohio well. I’m looking forward to starting fresh and showing up optimistic next weekend, and hopefully getting a better result.”

Yoshimura Suzuki Factory Racing’s next event is the fifth round of the 2014 AMA Pro Superbike Championships during the weekend of July 19 – 20, at Mid-Ohio Sports Car Course in Lexington, Ohio.