INGUITO, ESPIRITU AND MAURICIO VICTORIOUS IN FIRST LEG OF 2015 PSR

John Emerson Inguito of Team Spec V was triumphant in the initial race of the FDR Philippine Scooter Racing Championships. His teammates James Mendez and Aljon Valencia placed second and third for an all Spec V podium in the main 8-lap 180cc class of the PSR last April 26 at the Batangas Racing Circuit. Polesitter Josh Reuben Tan of Moto Tan ended up at fourth place but had the 1:40.512s best lap time in the race. 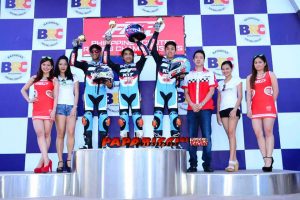 It was a great day for Spec V as another rider of the team, Robert Ryan Espiritu, grabbed the victory in the 160cc class. Joining Espiritu in the podium were John Edward Godoy and Roel Rubin. 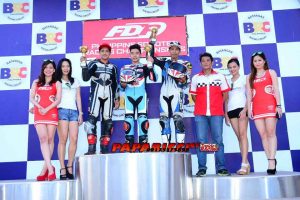 In the 130cc category, Gian Carlo Mauricio was the winner, finishing 31 seconds ahead of Jacq Buncio who crossed the finish line second and third placer Maiko Adapon. 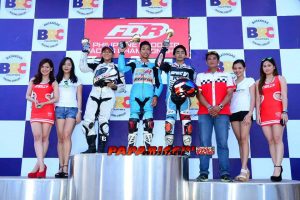 The 2015 FDR Philippine Scooter Racing Championships is sanctioned by USRA a member of the Federation of Two Wheel Motorsports Association of the Philippines(FETAP).