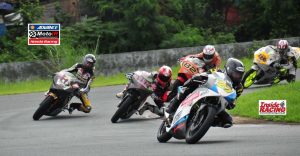 Suba narrowly missed getting his first MotoIR win of his career when he made a last ditch effort to overtake Canare on the line. The margin of victory was a scant 0.109 s. Third was ZEBRA-MLW’s Dustin Esguerra. Team Sum Racing NHK-Racewell rider Ralph Kenneth Torres (117) finished fourth.  Doblada(82) of MTRT-Honda faded from the front and eventually crossed the line ahead of Torres but was later excluded due to technical infringement.

NHK-Racewell’s Herbert Lopez (16) finished in 8th position in difficult track conditions but still earned enough points to maintain his lead in the championship.

The 9-race 2014 Shell Advance MotoIR Championship Presented by Honda is also supported by Racing Boy, FDR, Bridgestone and Vee Rubber. Now on its third season, the championship is organized by InsideRACING and sanctioned by the Underbone and Scooter Racing Association (USRA). Next race will be on August 17 at the Carmona Race Track in Cavite. 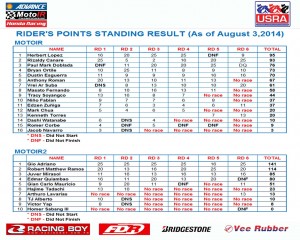