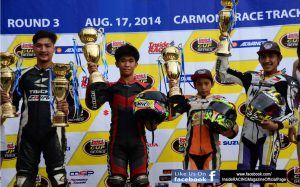 The fifth season of the IR CUP Series came to a close last August 17 at the Carmona Race Track in Cavite. Presented by Shell Advance, there were five class over-all championships at stake in the underbones and scooter categories.

After the races, the biggest winner was MLW Racing-ZEBRA rider Dustin Esguerra from Taytay, Rizal who took two automatic or scooter championships in the 160 Open and 180 Open.

These IR Cup Series champions will once again be honored at the Golden Wheel Awards Night to be held in 2015.

The 3-race 2014 IR CUP Series Championship Presented by Shell Advance is also supported by Honda, Suzuki, Motoworld, Racing Boy, Spyder, Motoactive, Stanley and SUM RACING. Now on its fifth season, the championship is organized by InsideRACING and sanctioned by the Underbone and Scooter Racing Association (USRA).