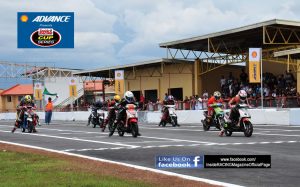 The 3-race 2014 IR CUP Series Championship Presented by Shell Advance is also supported by Honda, Suzuki, Motoworld, Racing Boy, Spyder, Motoactive, Stanley and SUM RACING. Now on its fifth season, the championship is organized by InsideRACING and sanctioned by the Underbone and Scooter Racing Association (USRA).

Still no Marquez for Austrian GP

Kawasaki and Rea get a Triple Victory WSBK Weekend