insideracing.com.ph – Lopez leads MotoIR heading to Round 7 at Carmona 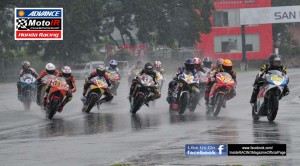 Herbert Lopez of Team NHK-Racewell heads into race 7 of the 2104 Shell Advance MotoIR Championships Presented by Honda Carmona Race Track this Sunday at with a slim 2 point lead in the championship over team mate and two-time defending MotoIR champion Rizaldy Canare (Team NHK-Racewell) .

In a very wet race 6 at Clark Speedway last August, his points lead was reduced when Lopez finished a lowly 8th position as Canare displayed his masterful wet riding to win.  Third in the standing is MTRT-Honda’s Paul Mark Doblada won last timeout in Carmona but was disqualified after the Clark race due to technical infringement. Fourth in the standings is another Carmona MotoIR winner Bryan Ortile (Petron-RaceAce). Fifth in the standings is last two races’ podium winner Dustin Esguerra (MLW-ZEBRA).One rider to watch out for this Sunday if it rains again is runner-up Vrei-ar Suba also of Team NHK Racewell who almost took the win from Canare.

The race on Sunday will be the final round of the 2014 IR CUP Series Presented by Shell Advance and also the Shoot-out for the Shell Advance MotoIR Youth Cup which will determine the two guaranteed slots in the Sepang Malaysia Shoot-out in October.

The 9-race 2014 Shell Advance MotoIR Championship Presented by Honda is also supported by Racing Boy, FDR, Bridgestone and Vee Rubber. Now on its third season, the championship is organized by InsideRACING and sanctioned by the Underbone and Scooter Racing Association (USRA). 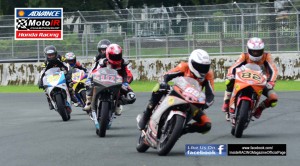