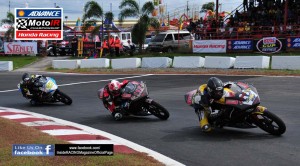 Round 7 of the Shell Advance MotoIR Championship presented by Honda was held at the Carmona Race Track last August 17. It was held in conjunction with the third and final round of the 2014 IR Cup Series presented by Shell Advance. Herbert Lopez of NHK-Racewell Sum Racing prevailed in the exciting and close 15-lap race that featured 15 riders. Team mate Ralph Kenneth Torres, who also represents the country in the 2014 Shell Advance Asia Talent Cup, finished second while Honda-MTRT’s Paul Mark Doblada took the third place. In the race, the team mates were hounded closely by another NHK-Racewell rider Rizaldy Canare. Their close wheel-to-wheel battles for most of the 15-lap race were the most exciting so far this season. It ended won the very last corner of the race when Canare lost the front wheel while trying to outbrake Lopez for the win. MTRT-Honda’s Dobada was promoted to third place at the end.

The 9-race 2014 Shell Advance MotoIR Championship Presented by Honda is also supported by Racing Boy, FDR, Bridgestone and Vee Rubber. Now on its third season, the championship is organized by InsideRACING and sanctioned by the Underbone and Scooter Racing Association (USRA). Next race will be on Sept 7 at the Batangas Racing Circuit. 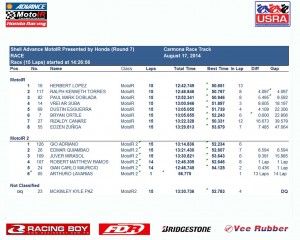