Insideracing.com.ph – MAURICIO and RAMOS OFF TO SEPANG for SHELL ASIA TALENT CUP SELECTION! 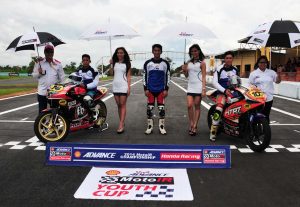 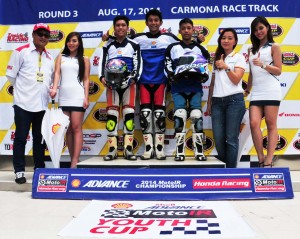 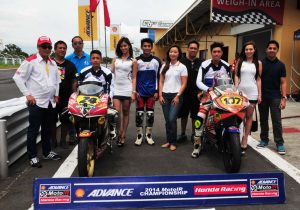 The 2014 Shell Advance MotoIR Youth Cup winners are 15-yo MTRT-Honda’s Robert Matthew Ramos and FB Racing’s 13-yo Gian Carlo Mauricio . They now have guaranteed slots to represent the Philippines in the Shell Advance Talent Cup Selection Days to be held in Sepang Malaysia right after the Malaysian MotoGP event in October.

The Shell Advance MotoIR2 Youth Cup (SAMYC) is open only for MotoIR2 riders with aged 14‐18 years old. The top riders in the SAMYC after round 6 held last on August 3 qualified for the SAMYC Philippine Shootout in Carmona held last August 17.

The Shell Advance Asia Talent Cup is an exciting new competition that started from 2014, which acts as a feeder series to the world of motorcycle racing. The project aims to give riders from the Asian region a formal path into competitive road racing.

Led in‐part by renowned and successful talent scout Alberto Puig, responsible for such talents as Casey Stoner and Dani Pedrosa and the leader of the successful MotoGP™ Academy, the competition will see Asia’s stars of the future participate in an eight‐race series (in 6 events) in 2014 on Honda NSF250R Moto3 machines.

Run by Dorna, the organizers of the MotoGP™ World Championship and the eni FIM Superbike World Championship, as well as co‐organizer of the Red Bull MotoGP Rookies Cup, the competition will provide a spotlight for the most talented young riders in Asia.

The 22 young riders came from Malaysia, Japan, Indonesia, Thailand, China, Singapore and the Philippines’ own Ralph Kenneth Torres who made it through the pre‐selection event at Malaysia’s Sepang International Circuit last October 2013 .

Aside from the two MotoIR Youth Cup winners, other candidates below 20 years may apply at www.asiatalentcup.com between August 1 until September 5.