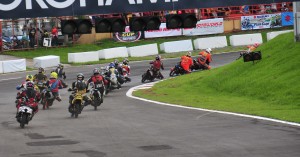 Six of the country’s top riders lead their respective classes at the 2014 IR CUP Series Presented by SHELL Advance heading into the third and final round this Sunday August 17 at the historic Carmona Race Track in Cavite.

The top 180 Scooter Open and 150 Open Underbone championships are both being led by JVT Scooter’s  John Emerson Inguito while expert rider Dustin Esguerra of MLW leads the 160 Scooter Open.

The 2014 IR CUP Series is organized by InsideRACING and sanctioned by the USRA and is now on its 5th consecutive season. It is presented by Shell Advance Oils with support from Honda Philippines. Suzuki Philippines, Motoworld, Racing Boy, Spyder,Motoactive, Suntal and SUM Racing.