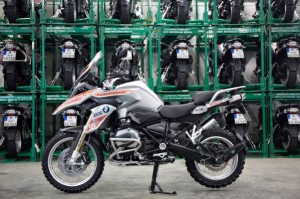 For the fifth time, the BMW Motorrad International GS Trophy has invited the best GS riders in the world to take part from 28. February to 5. March 2016 in an event that comprises several daily legs and numerous special stages. The thrilling national qualifying rounds have now led to the formation of nineteen international teams, including for the first time one team made up solely of women. They will all be facing what is a major feat of strength for participants and engines alike. For seven days, they will be competing against each other as they make their way on two wheels through the exciting landscape of Chiang Mai Province in the north of Thailand, the location of this year’s contest for the international GS Trophy.

To ensure that the riders in the competition have the right vehicles at their disposal, a total of 114 BMW R 1200 GS motorcycles are to be transported by sea to Thailand, including 14 BMW 1200 GS Adventure bikes for the marshals. They have now left the BMW Motorrad headquarters in Munich, Germany and it will take around 40 days from setting sail in Hamburg to arriving at the destination port of Laem Chabang.

Original BMW Motorrad Accessories – to make the good even better.

To master the extreme conditions that they will be exposed to in the course of the GS Trophy, certain details of the R 1200 GS motorcycles – which are already extremely well equipped in their standard configuration – have been subjected to further modification. Selected Original BMW Motorrad Accessories make the bikes even more resistant to the stresses and adversities typical of the GS Trophy that far exceed the usual norm. Examples of these are the aluminium enduro engine guard and steel crash bars. Moreover, the safety screw for the oil filler neck and the robust headlight guard are taken from the Original BMW Motorrad Accessories safety programme.

As for the factors of ergonomics and comfort, an adjustable footbrake lever and wider enduro footrests support riding in a standing position. The modification package is rounded off by the Metzeler Karoo 2 off-road tyres.

The essential conditions are now in place that will ensure that the International GS Trophy 2016 – with its unique combination of adventure, exotic cultures, new friendships, jungle, sand and dust – remains an off-road rally that is simply one of a kind.