With a 9.799s margin of victory, Evander Soliveres reigned in the 130cc class of the Philippine Scooter Racing Championships (PSR). His fellow Yamaha-Spec V rider McDon Dave Sande meanwhile managed to win the 160cc PSR class despite the pressure from Niel Jan Centeno. JVT rider Gian Carlo Mauricio emerged triumphant in the exciting 180cc PSR class after battling with top scooter riders. These all happened at the fourth round of the FDR Philippine Scooter Racing Championships held on August 6 at the west course of the Clark International Speedway in Pampanga. 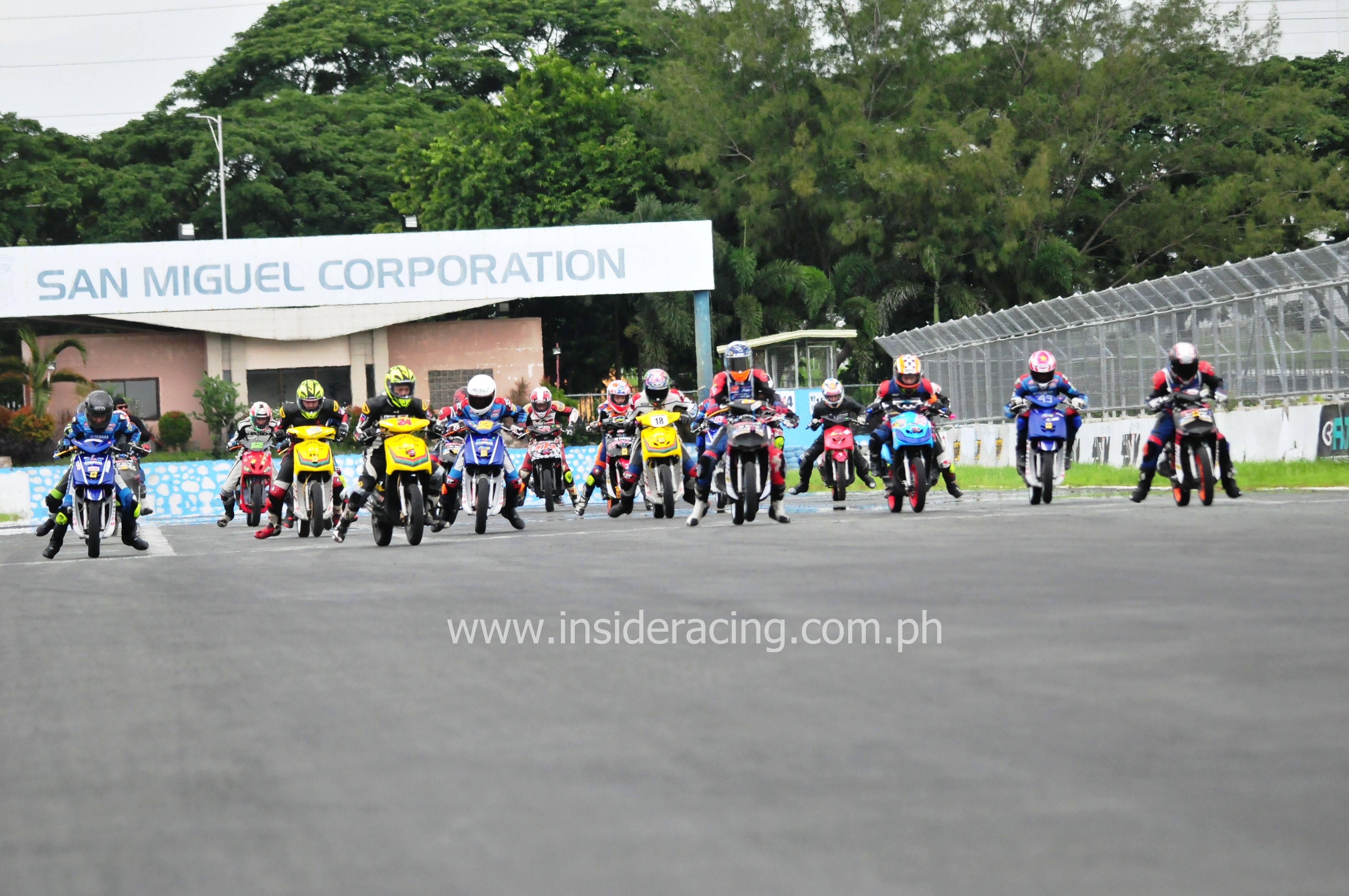 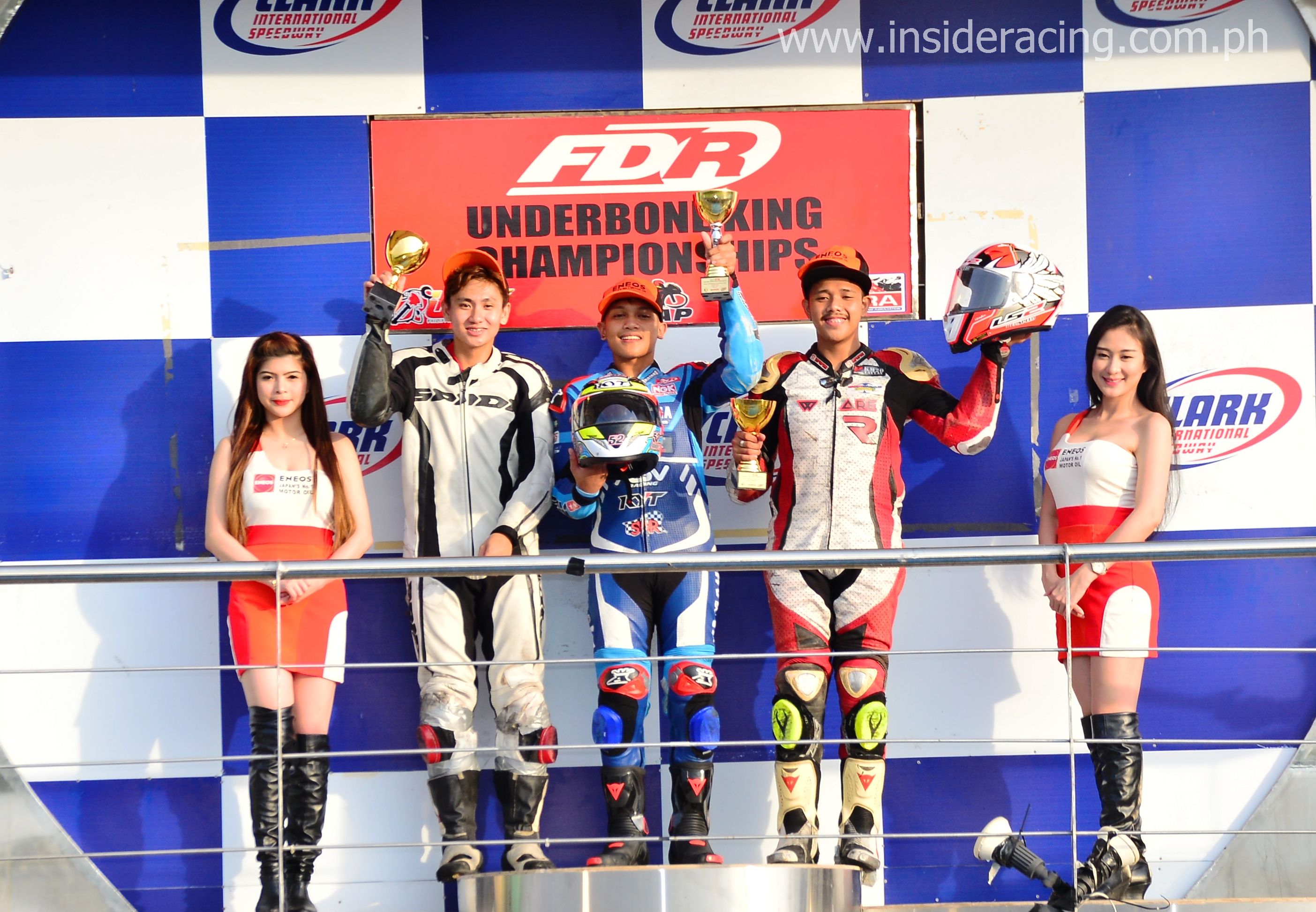 0.144s was the slim margin of victory of Sande over Niel Jan Centeno of Phoenix-Yamaha-KOSO-Faito in the 160 PSR class. Third placer was Centeno’s teammate and the only female rider in the race, Justinne Bethany Tolentino. 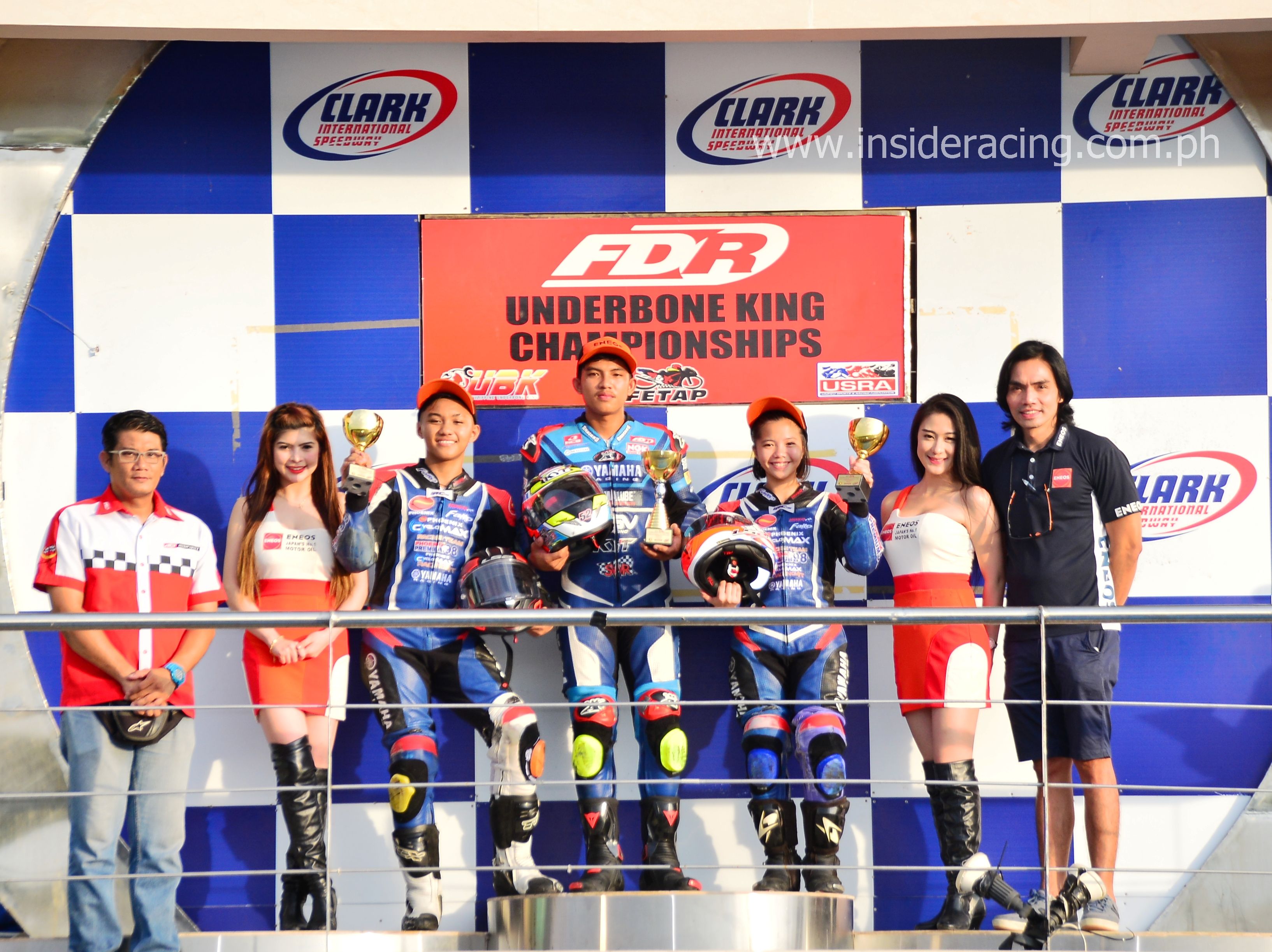 The main 180cc PSR class once again showcased a thrilling battle among the high caliber scooter riders in the country. Mauricio, James Mendez of Yamaha-Spec V, McKinley Kyle Paz of Phoenix-Yamaha-KOSO-Faito and Masato Fernando of Yamaha-Spec V comprised the lead pack of the race. As the 8-lap race is nearing its end, however, Mauricio, Mendez and Paz were the ones who are tight up to the finish line. As the checkered flag was waved, it was Mauricio who finished first. Mendez placed second as he crossed the finish line 0.296s after Mauricio. Paz grabbed the third place as he came 0.393s after the JVT rider. The slim margin of Mauricio’s time over Mendez and Paz manifested how close their race was. Fastest lap time of the race was 1:08.433s courtesy of Paz. Vrei-ar Suba, teammate of Paz, finished fourth followed by Romer Corbe of Yamaha-Spec V and Cassey Ng of JVT.  Zebra-Pertua-MLW-MTRT-RK-Vee Rubber ride Dustin Esguerra placed seventh. Clifford Bacus of FaderN’Sun racing team finished eighth and Masato Fernando who had bike problems settled for ninth place. Mickey Mazo placed tenth in the race. 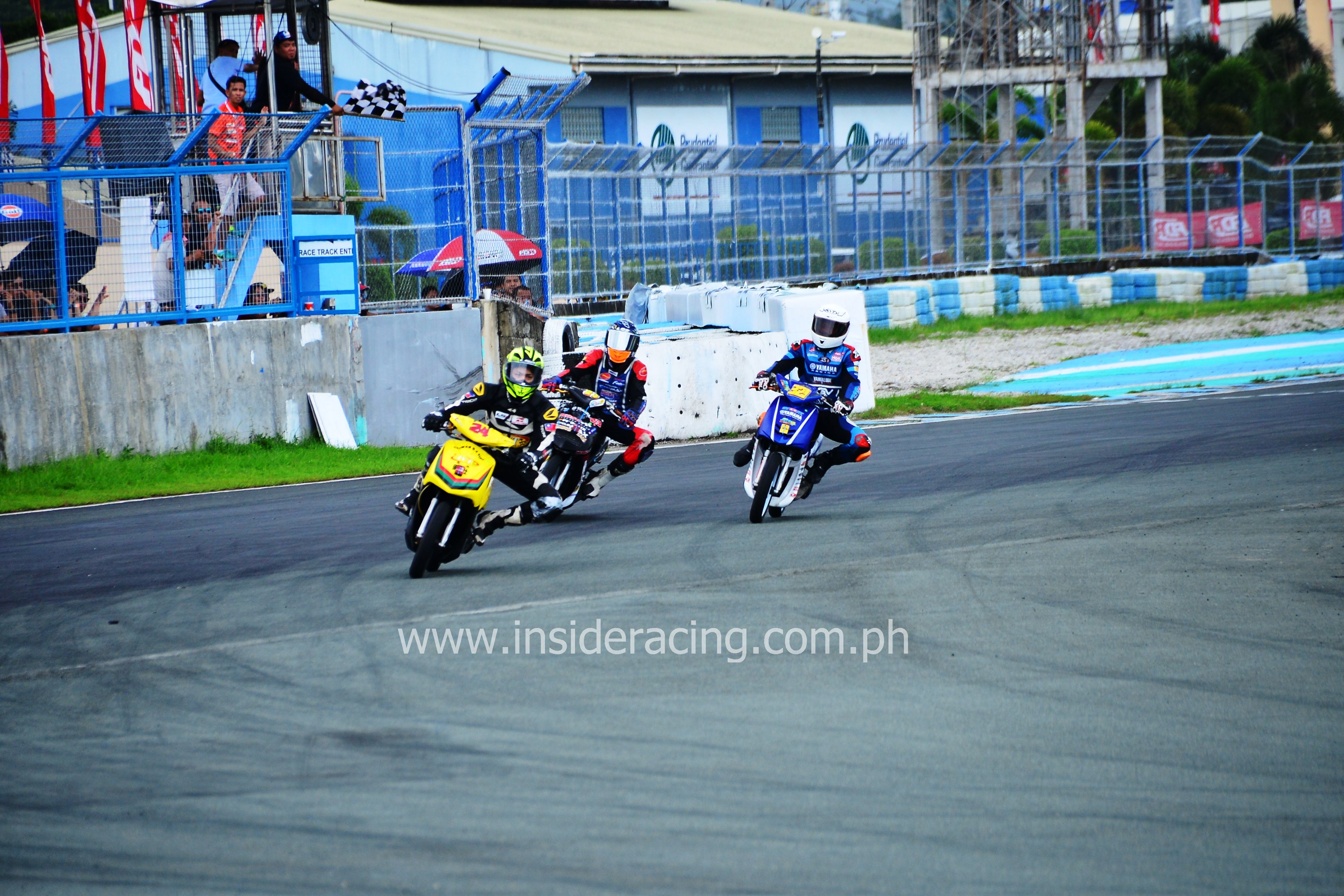 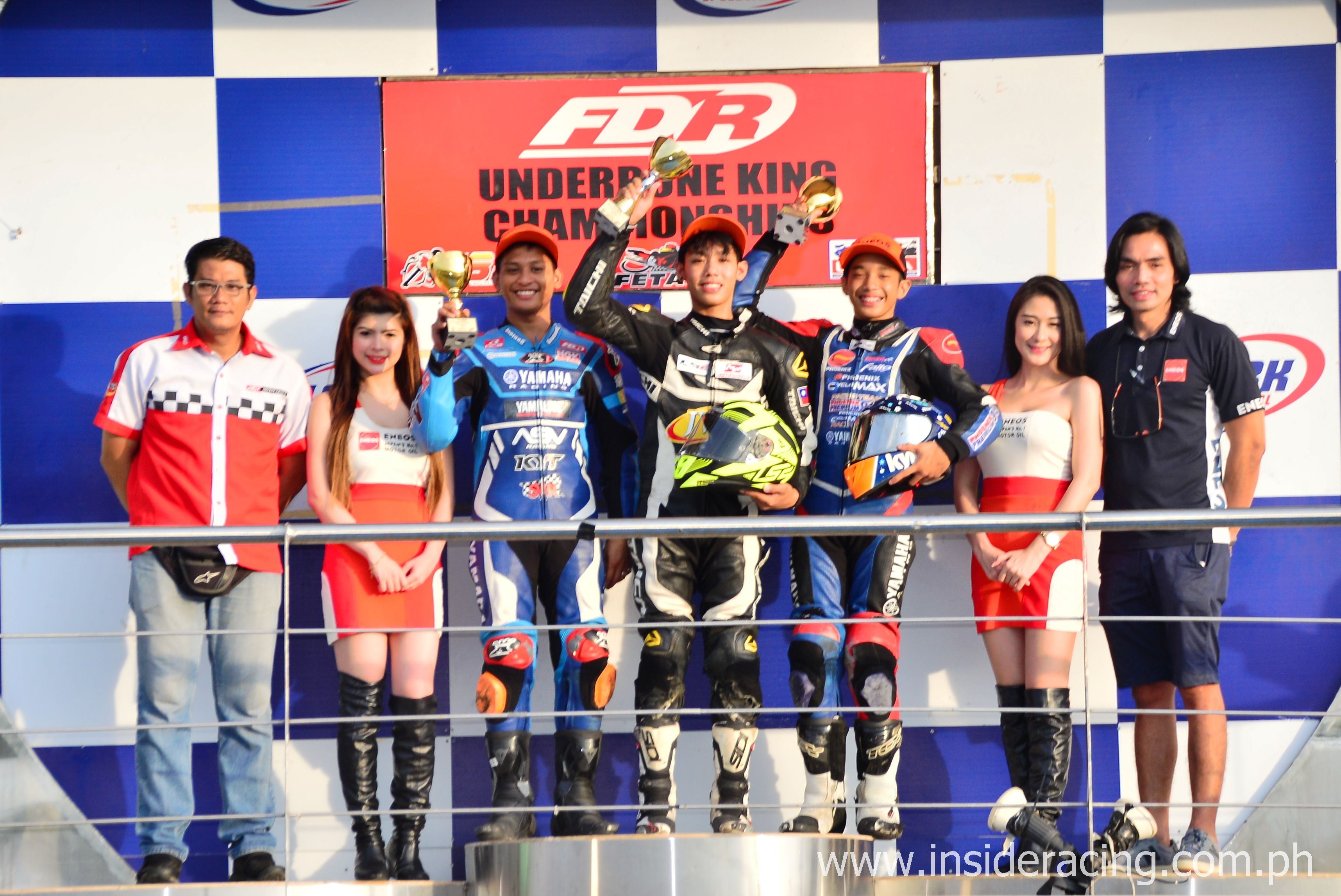 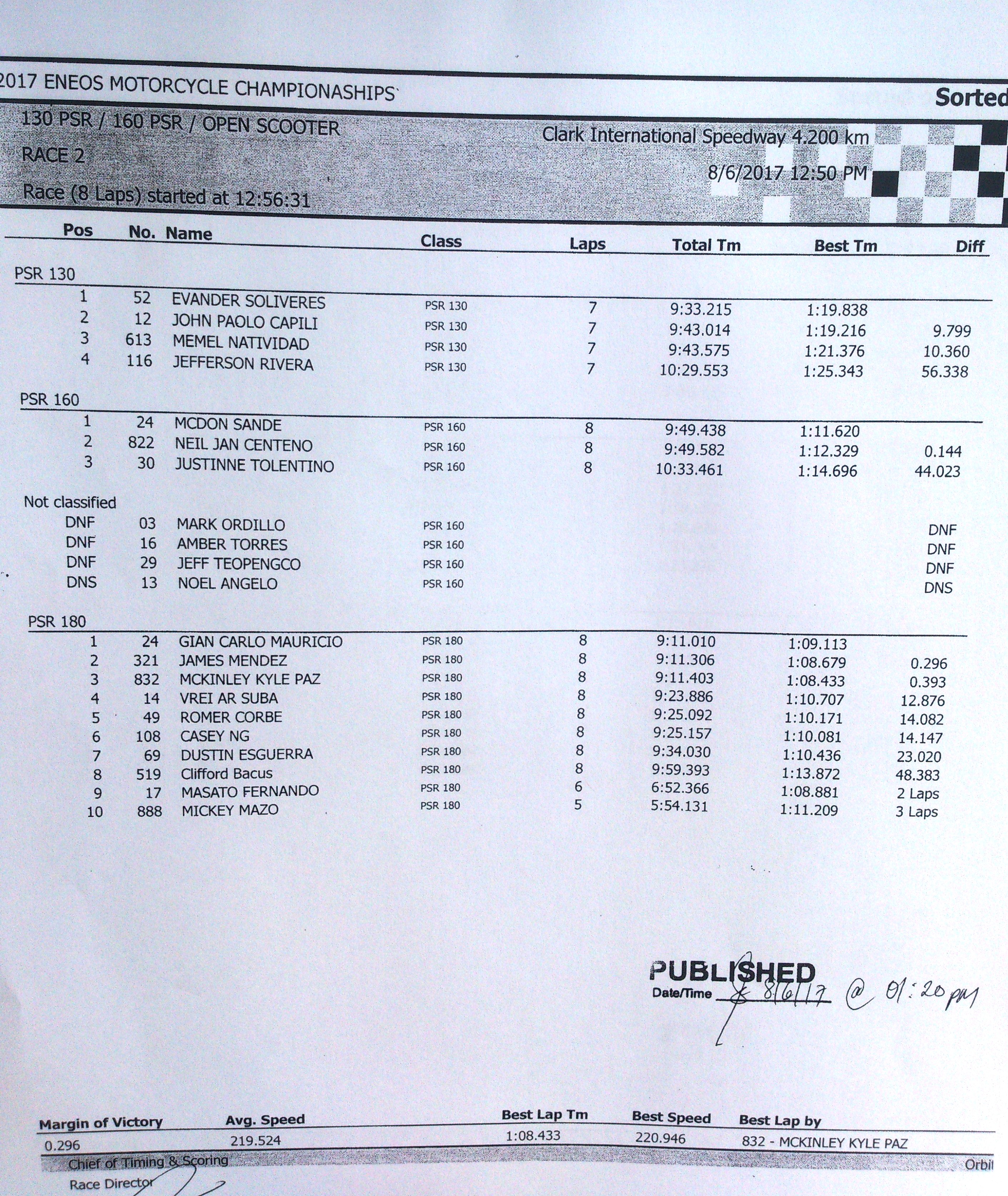 After Round 4, Mauricio leads the 180 PSR standings as he has 97 points. Paz is second with 80 and Fernando who has 72 is at third place so far. Centeno ranks first in the 160 PSR standings with 92 points. Sande with 87 points is at second place while Tolentino has 70. Soliveres has 93 points and is the leader in the 130 PSR class standings. At second place so far is Memel Natividad who has 84 points while John Paulo Capili has 69 points and is currently at third place.

The PSR is sanctioned by USRA (Unified Sports and Racing Association for Motorcycles, Inc.) and it is part of the 2017 ENEOS Philippine Motorsports Championships. Round 5 of the PSR is on September 2-3 at the Batangas Racing Circuit.