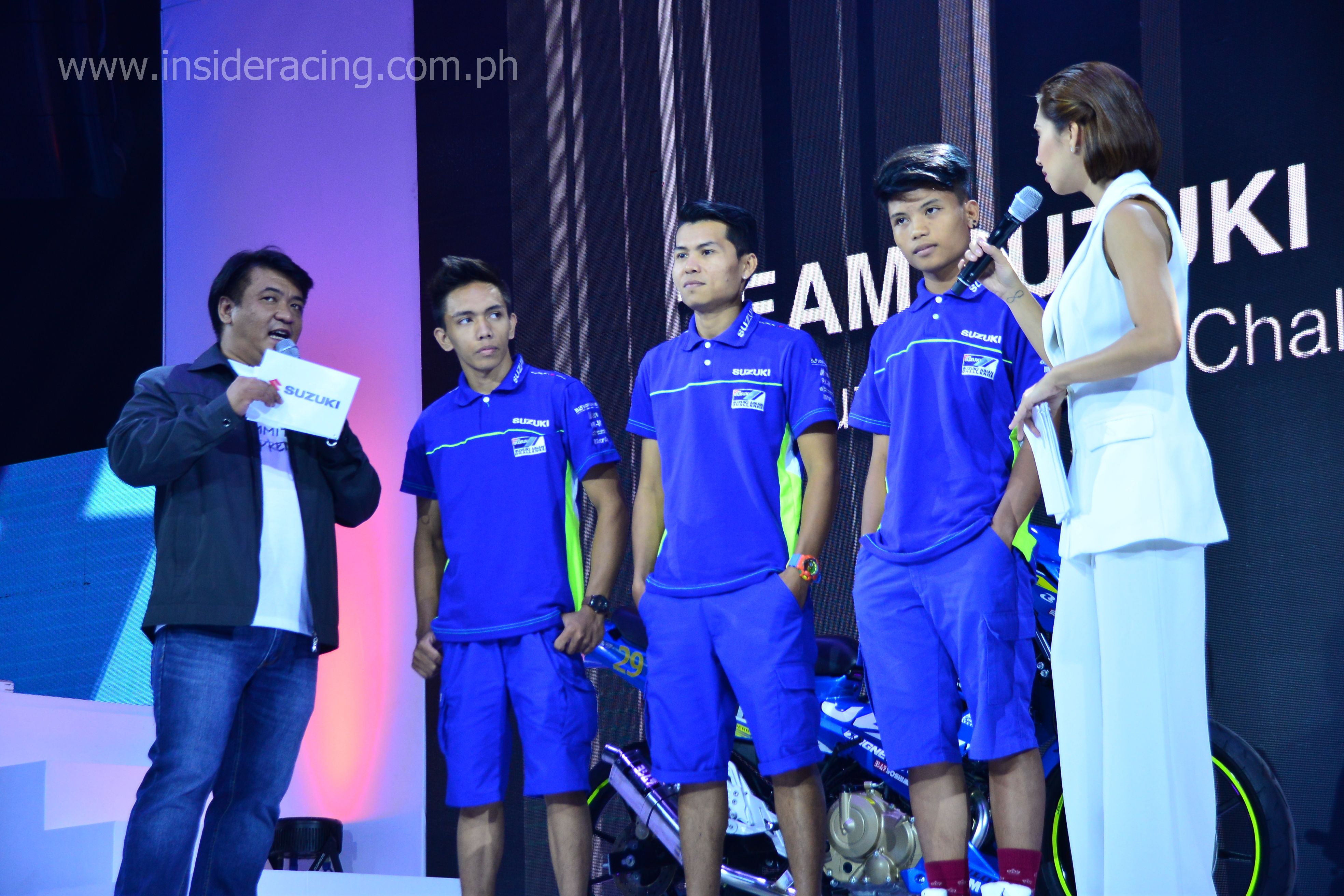 Before they set out for Malaysia, Team Suzuki Pilipinas riders were present at the 11th InsideRACING Bike Festival and Trade Show at the World Trade Center Metro Manila. Suzuki Philippines proudly presented the team and their achievements. 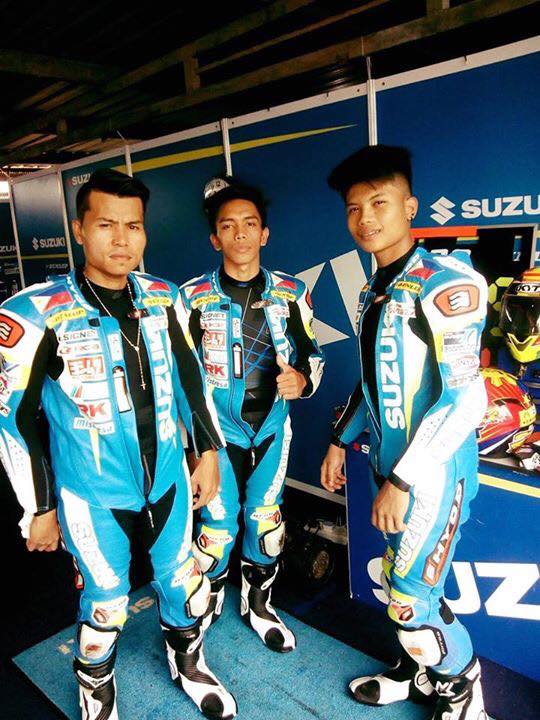 It was indeed a good start for Team Suzuki Pilipinas in their chase for our first ever ARRC Suzuki Asian Challenge title this year. The 2017 Suzuki Asian Challenge of the Asia Road Racing Championship (ARRC) kicked off its first round in Johor Circuit in Malaysia on April 1-2. Picking up from where they left last year wherein they scored a podium finish in every race, Team Suzuki Pilipinas once again impressed as our riders clinched the victories in both Race 1 and 2 of the series opener.

April King Mascardo got the pole position for Team Suzuki Pilipinas with his 1:57.660s lap time which broke last year’s record by close to 2 seconds. Fellow Filipino rider Eane Jaye Sobretodo qualified 3rd. Mario Borbon Jr. who qualified at 11th place redeemed himself come race time as he chased the race leaders in the latter laps of the race wherein the riders battled in wet condition as it rained. Borbon Jr. was able to catch up with the Indonesian and Sri Lankan rider in front and took the lead. Once in front, Borbon Jr. was unstoppable and he won Race 1 which had 7 laps. Indonesian riders Ahmad Saugi Muchtar and Nur Al Fath Sam Ahmad finished 2nd and 3rd. Sobretodo placed 5th but submitted the race’s best lap time which was 2:09.854s. Mascardo ended up at 9th place. 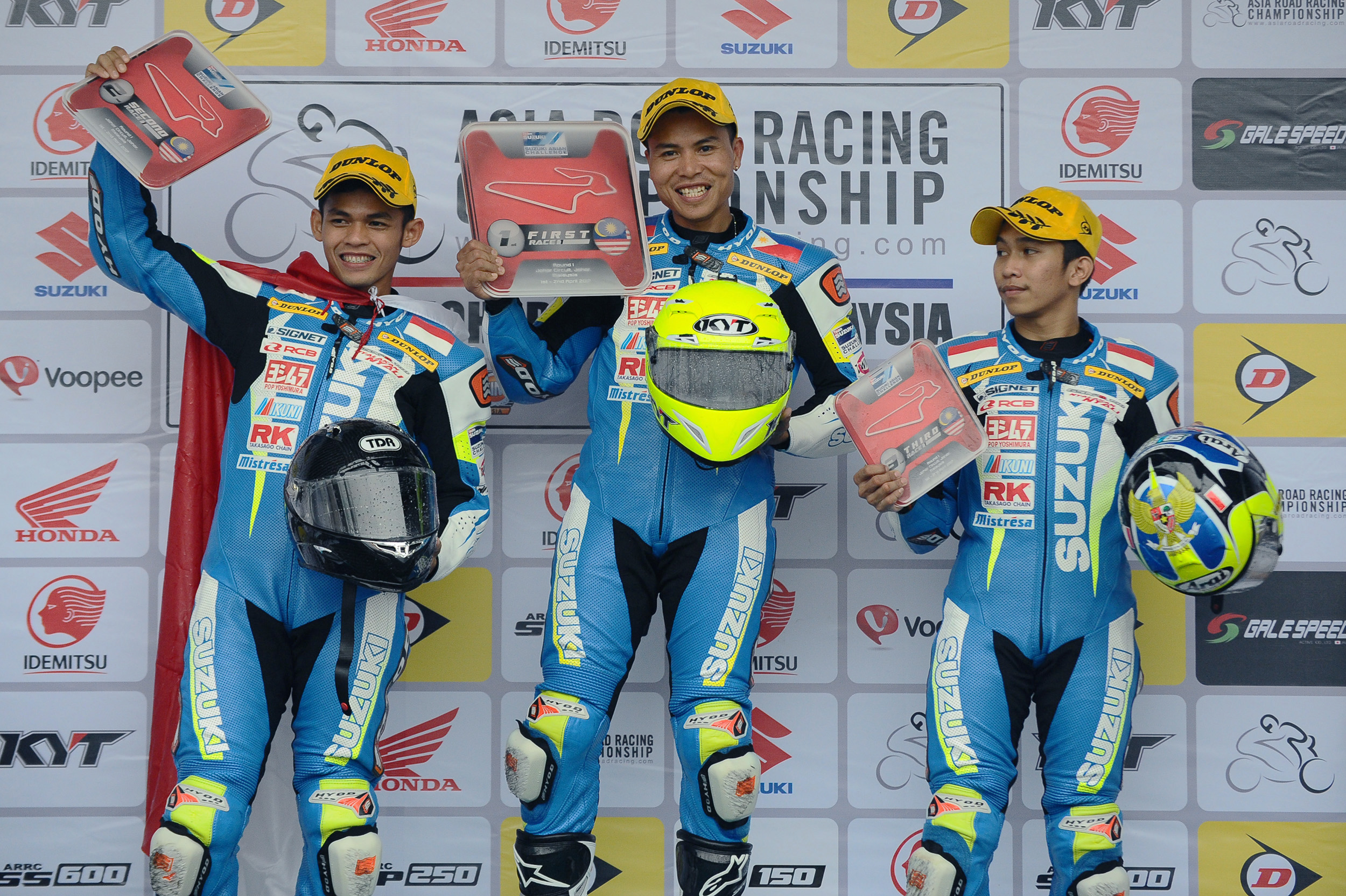 Mario Borbon Jr. joyfully stood on top of the podium as he won Race 1 of the first round of the 2017 Suzuki Asian Challenge held in Johor Circuit, Malaysia (Photo by Asia Road Racing Championship)

After failing to grab a podium finish in Race 1, Mascardo was on fire in Race 2 wherein he secured the top podium spot after 7 laps of racing. He together with Borbon Jr. and Sobretodo had a blistering start. Mascardo took the lead with Borbon Jr. and Sobretodo also in the lead pack. Unfortunately, Sobretodo got tangled up with two riders in the second lap and crashed resulting into a DNF (did not finish). Borbon Jr. on the other hand got caught in the main pack and eventually settled for 8th place. Mascardo never let go of the lead and took the checkered flag with a 6-second margin of victory over Tetsuya Fujita of Japan who finished second. Third placer was Thailand’s Punchana Kulrojchalalai. 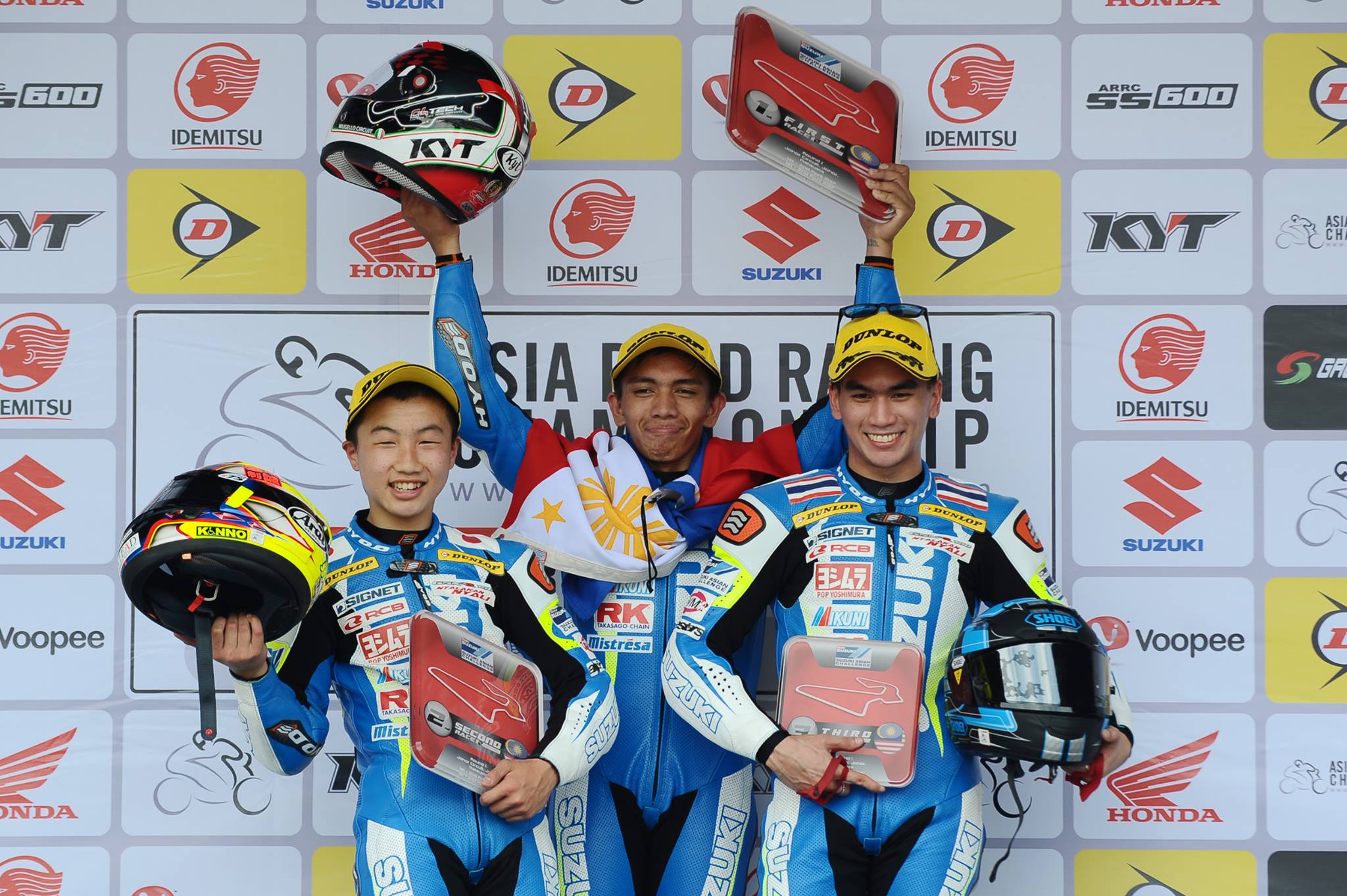 After the first round, Borbon Jr. leads the overall standings with 33 points followed by Mascardo who has 32 points. Sobretodo is at 11th place so far with 11 points. Sobretodo is alright  and is determined to bounce back in the second round. Team Suzuki Pilipinas is accompanied by Suzuki Philippines’ Mr. Noel Villapando and mechanics Mr. Rico Cagnaan, Mr. Insik Flores and Mr. Malvin dela Cruz and Eane Jaye’s father Mr. Gerald Sobretodo. 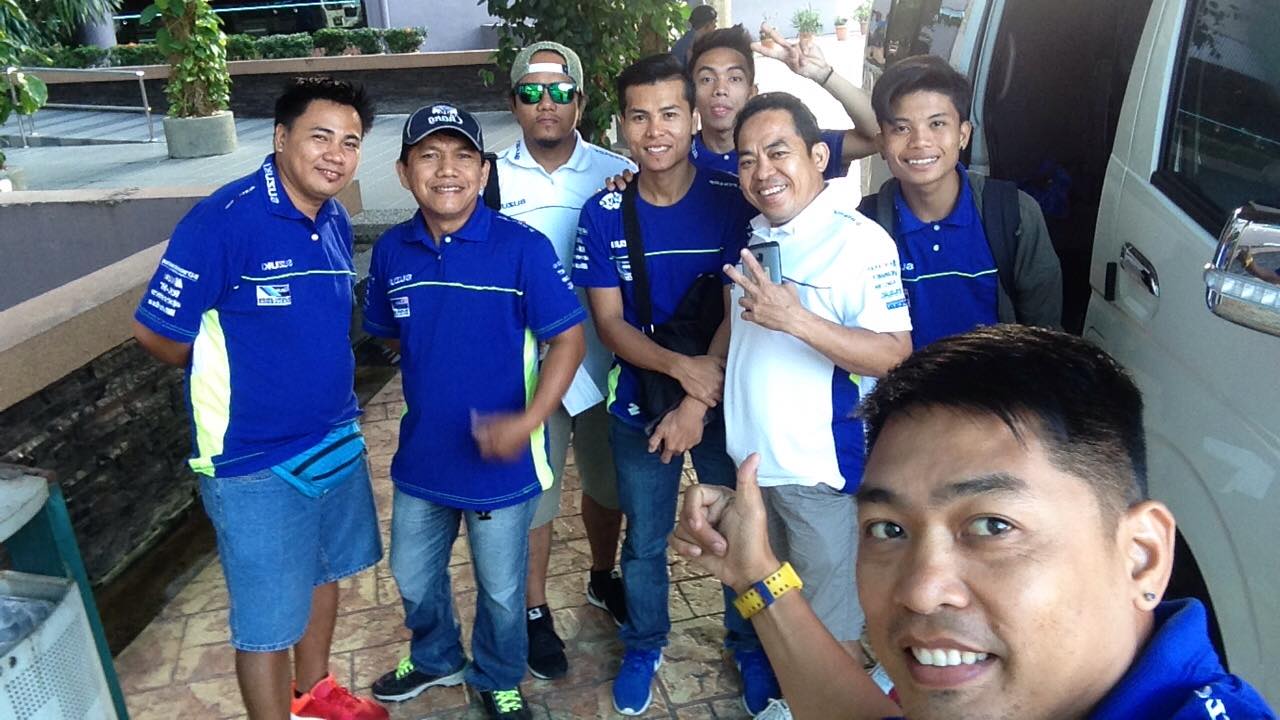 The Suzuki Asian Challenge is a rider developmental program which is part of the ARRC. It aims to hone Asian talents into future racing stars someday. 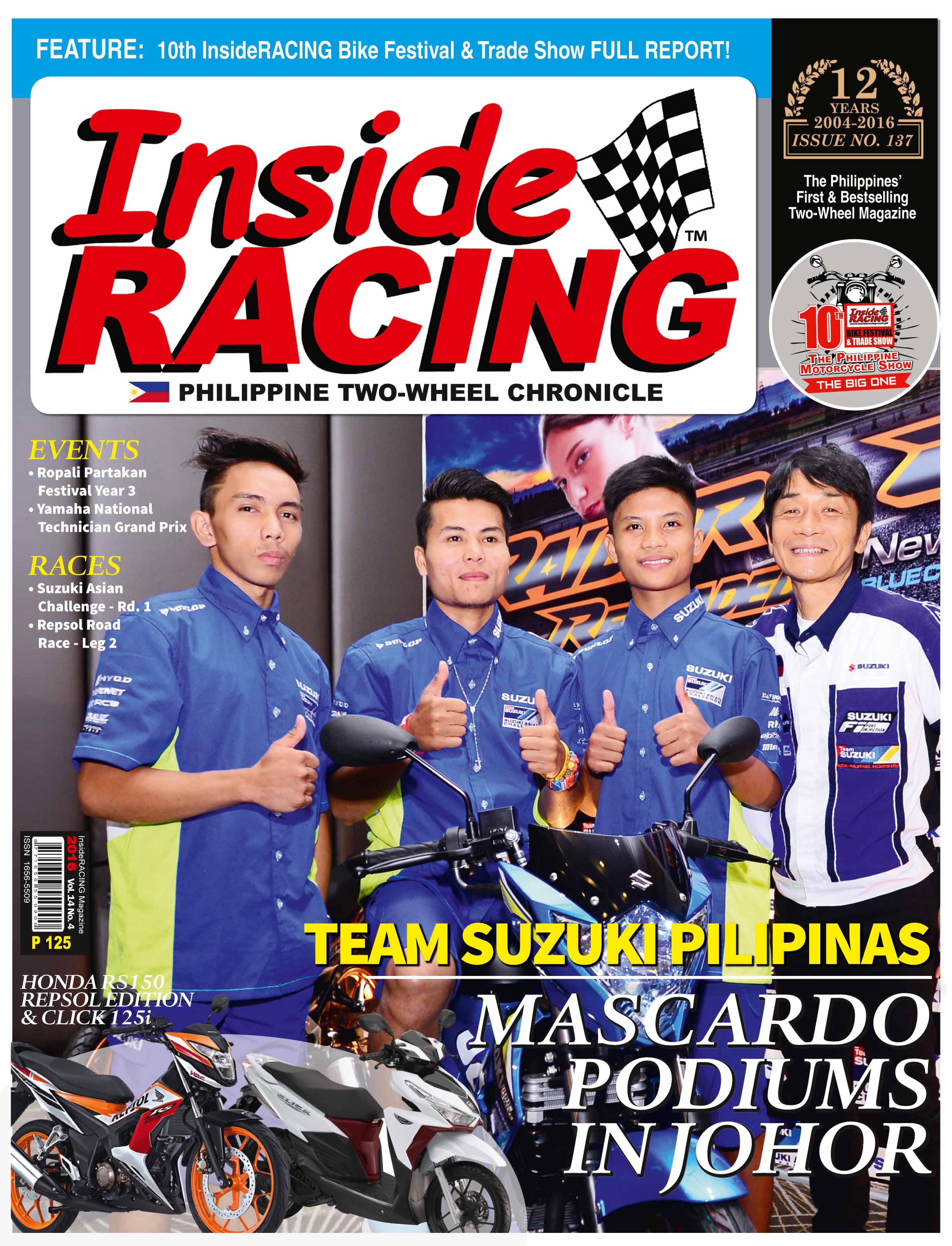 Last year, Team Suzuki Pilipinas riders together with Suzuki Philippines’ President Mr. Hiroshi Suzuki were featured in IR’s Volume 14 Number 4 issue after Mascardo placed second in Race 2 of the first round of the 2016 Suzuki Asian Challenge. After last year’s impressive performance , Team Suzuki Pilipinas scored wins in the opening round of this year’s series and is set to capture the first SAC title for the country.