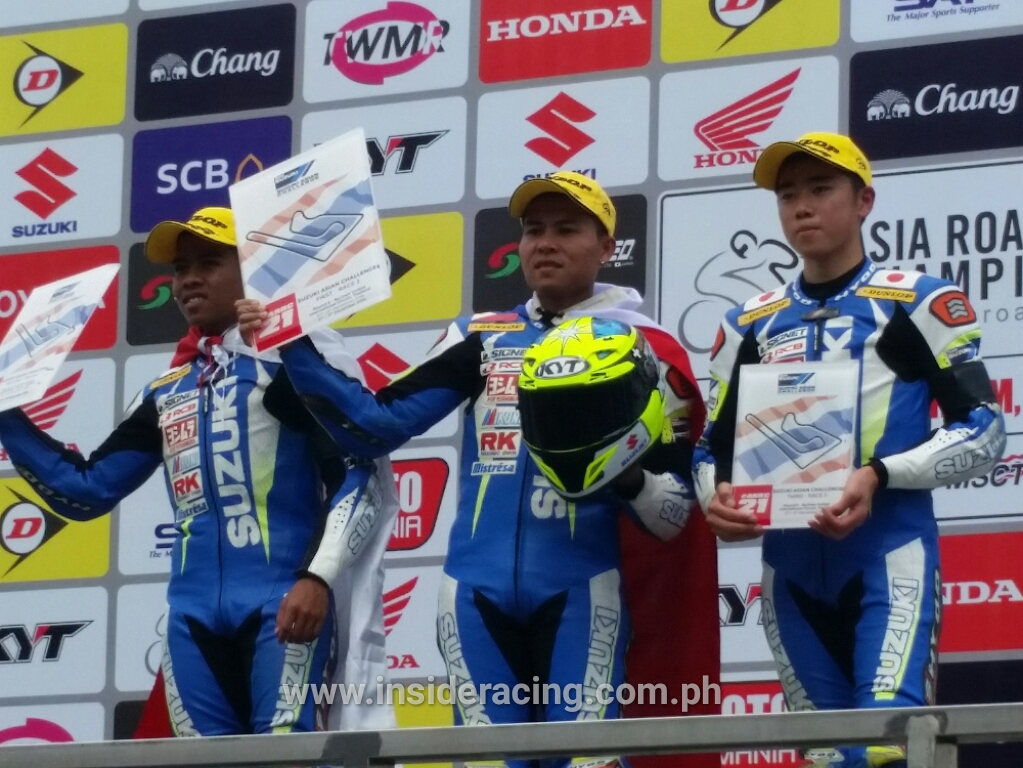 Buriram,Thailand – The final corner on the last lap played an important role once again in the outcome of a 2016 Suzuki Asian Challenge (SAC) race.
After starting in 6th, 8th and 9th on the grid,  the three Filipino riders Sobretodo, Borbon and Mascardo had their usual strong runs during the race able to keep with the leading pack.
The first 4 laps of the 7 lap race was an intense battle between Japanese Akito Haga and Max Hattori and Malaysian Arsyad Rusydi Shaharum. This was made possible when Pole sitter and 2016 SAC Champion Jefri Tosema crashed on lap 1. Tosema managed to restart but his Raider was damaged and he limped home to 9th place at the finish.

Sobretodo again fought hard and was able to lead the race for two laps when the some of the leaders made a mistake and crashed including Haga and Hattori.
Borbon, meanwhile, was able to get near the pack with three laps to go and momentarily took  the front of the race on lap 5. After yesterday’s stellar performance from the  Cebuano he is very determined to make the best out of this race.

Meanwhile, Mascardo was plagued by a slow bike and languished at the mid-pack. He focused on just maintaining what speed was available to him  and actually went as high as third with a lap to go. But he said he had no chance to fight for the win.
Going into the last corner Team Suzuki Pilipinas riders Sobretodo was leading with Borbon comfortably in third. Then out of nowhere, the  fourth place rider Gunawaedena of Sri Lanka dived into the inside on the last minute and lost control crashing into the defenseless Sobretodo who was already exiting the final corner. Sobretodo sadly lost another win.
But all is not lost for the country as Borbon was able to scoot past Indonesia’s Feriyedi to take his first international win and the second win for the Philippines in the 2016 Suzuki Asian Challenge. The Filipino contingent here at Buriram felt overwhelmed and very proud. A feeling shared by thousands of Filipino fans who were also watching the race on line back at home. 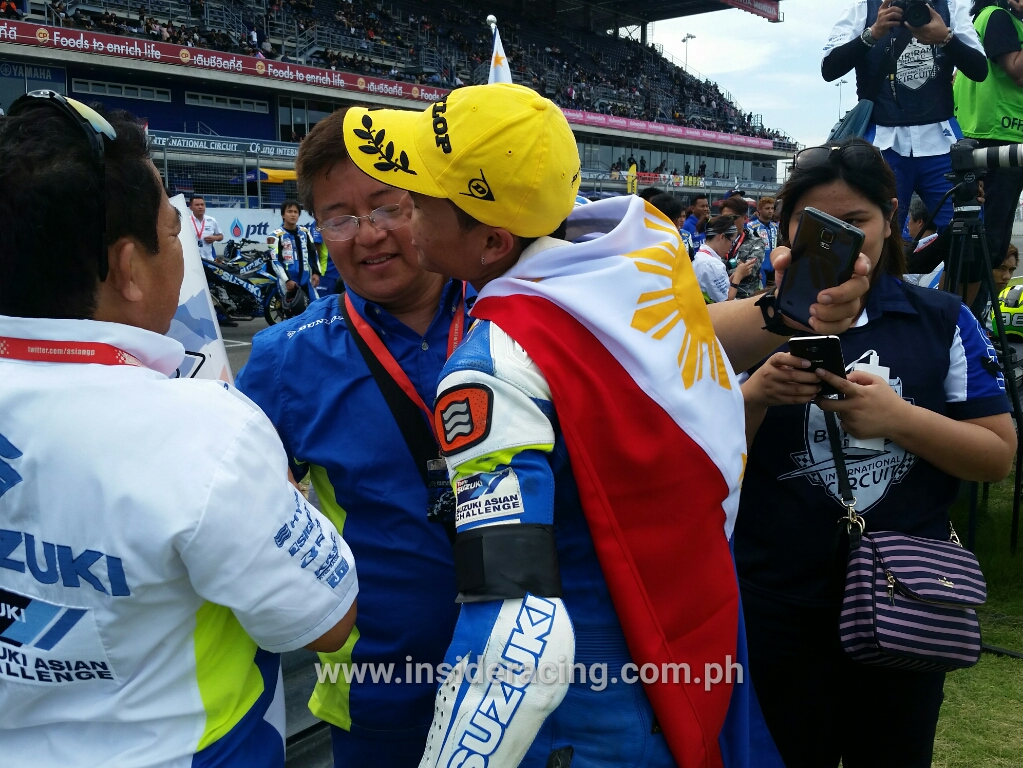 Borbon and his coach mechanic Bobby Mencias were very emotional going into this final race. Borbon is on his second SAC campaign and is the oldest rider at 30 years of age. Even before the start of the race on the grid, the tandem were cherishing the moment and already feeling proud of what they are able to achieve. “Malayo na ang narating mo Mario! Think of your family especially your daughter,” said Mencias which made Borbon more emotional and motivated. If this will be his last SAC race he will make it count. 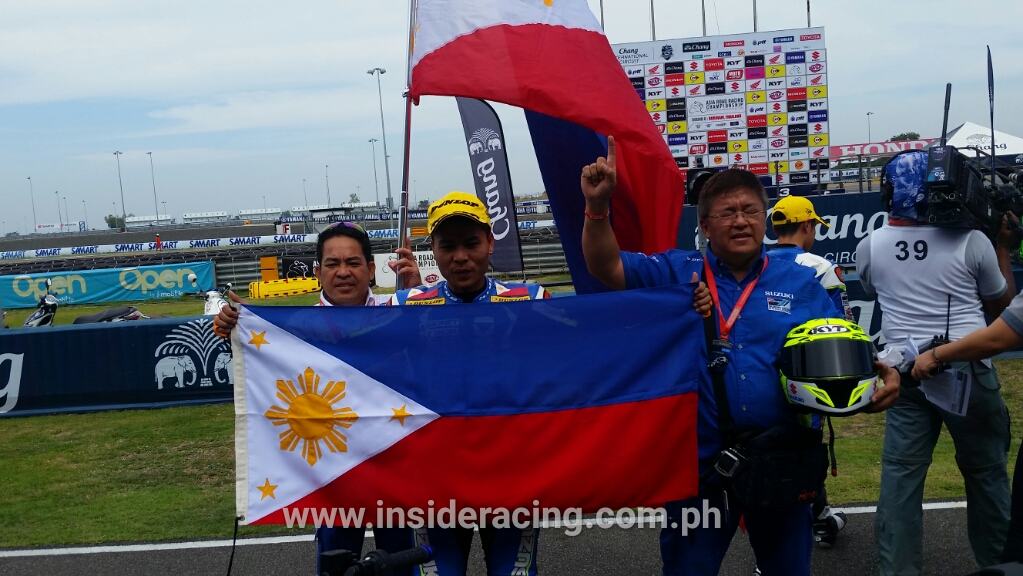 7 laps later Borbon was standing on top of the victory podium with the Philippine Flag at the center and Philippine national anthem being played. Borbon made history again and is now the latest Filipino racing hero. Finally fullfilling his dreams, he gave thanks to Suzuki and to all his fans and supporters all these years most especially his family. In the race the ARRC commentator said “experience will win over youth” and today it did. 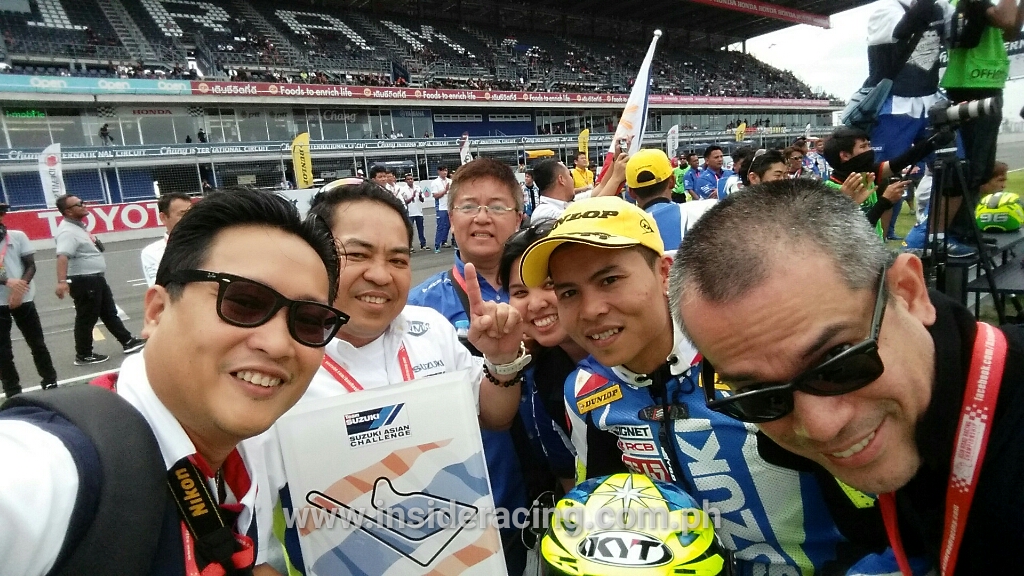