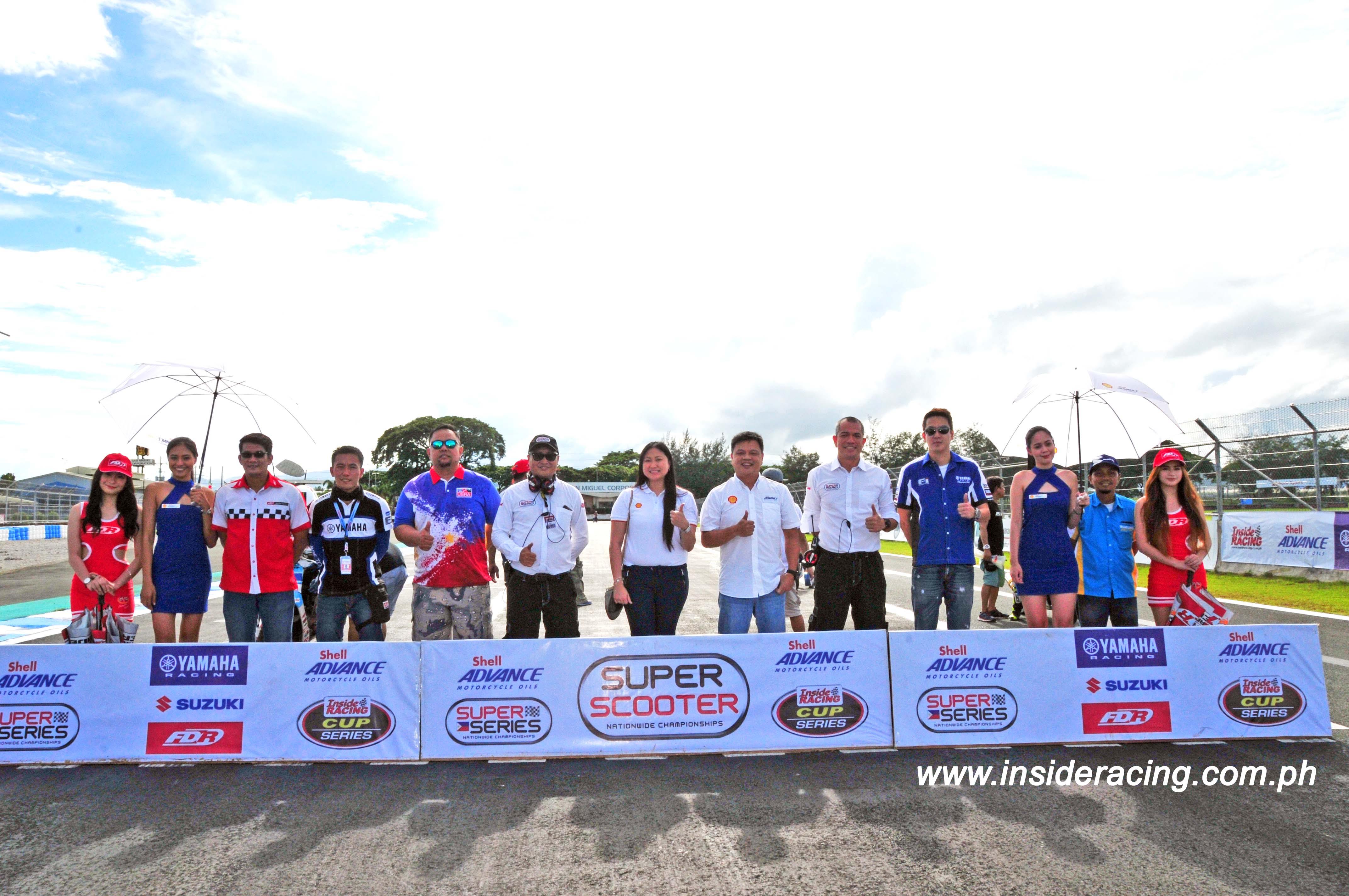 Organizers, presenter and sponsors of the 2016 Shell Advance Super Series Nationwide Championships and USRA representative during the final leg of the series last year in Clark

After a successful inaugural season, the Shell Advance Super Series Nationwide Championships is set to kick off its second season this Sunday, April 9 at the Clark International Speedway in Pampanga. The series fueled by Shell-V Power is sanctioned by the Unified Sports and Racing Association for Motorcycles, Inc. (USRA) which is recognized by the Philippine Sports Commission.

Just like last year, Shell Advance, FDR Tires, Suzuki Philippines and Yamaha Motor Philippines are in support of the 2017 Super Series. For the second season, Honda Philippines and CST Tires have joined the nationwide series which made it more exciting! 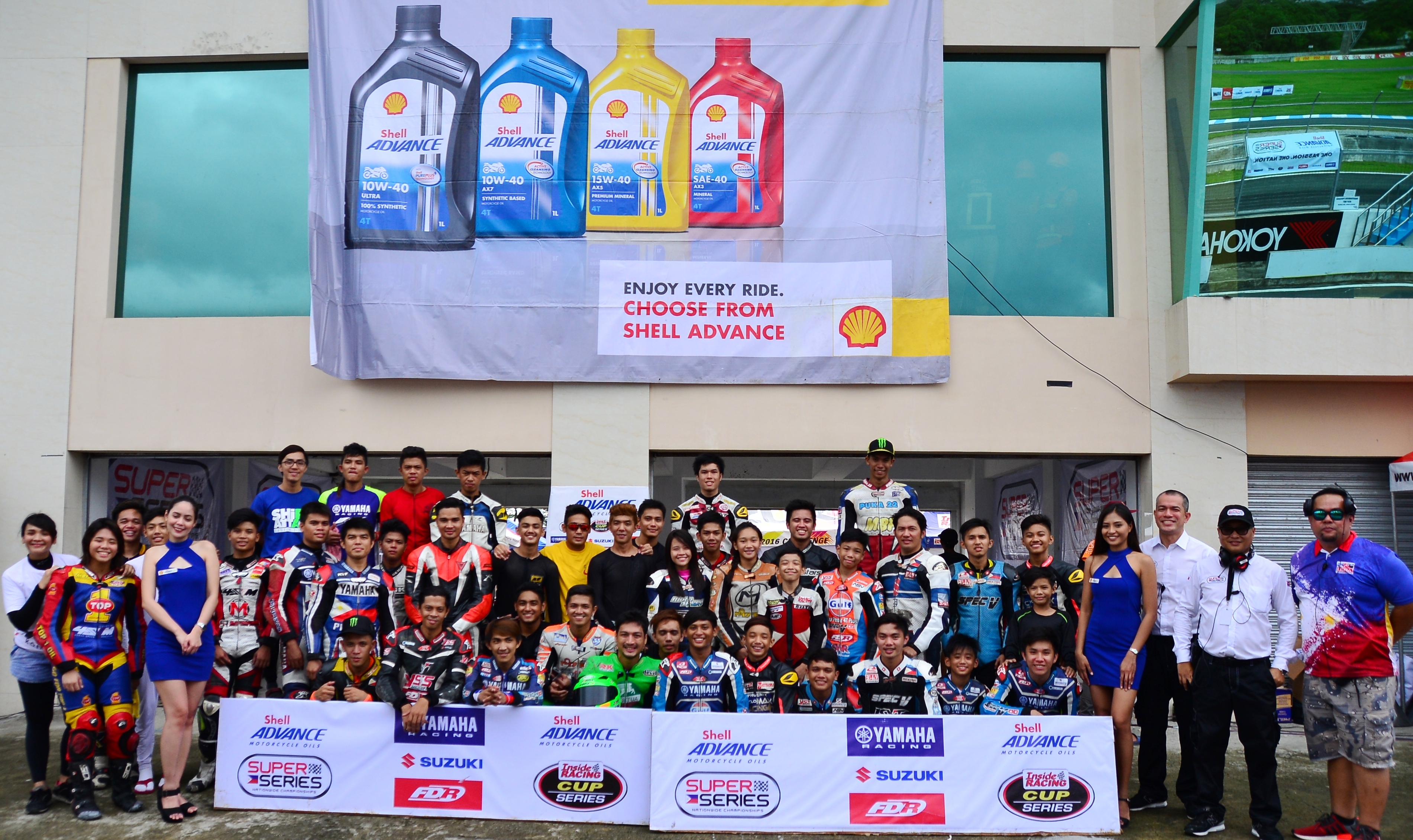 Participant riders at the final round of the 2016 Shell Advance Super Series Nationwide Championships at the Clark International Speedway. With the riders are Mr. Al Camba of InsideRACING, Mr. Jong Uy of The Racing Line and Mr. Duds Lumague of USRA.

The Super Series is a nationwide competition which gathers the best riders from all over the country. It is where the best of the best are hailed as riders have to battle it out in different racetracks and courses. Top teams and riders from different parts of the country get to compete with each other to the delight of race fans. Luzon races of the Super Series are organized by InsideRACING while The Racing Line holds races in Visayas and Mindanao. Super Series classes this year are the Super Suzuki, Super Yamaha, Super Underbone, Super Scooter and the new category, the Super Honda.

The Super Suzuki class will be contested by Intermediate and Expert riders on board Suzuki Raider R150 race bikes provided by Suzuki Philippines. Last year’s champion was April King Mascardo and this year, notable riders will once again vie for supremacy to be hailed as the Super Suzuki champion.

The Yamaha Sniper 150 MXi motorcycles are featured in the Super Yamaha category. Yamaha Motor Philippines is providing race bikes for the category which is open to all riders. The defending champion of this class is Dan Carlos from Mindanao. The thrilling races featuring Yamaha Sniper 150 MXi race bikes are always being looked forward to by race fans.

John Emerson Inguito, a well-known rider from Luzon, was the inaugural champion of the Super Underbone class. This year the said category will once again showcase the skills of underbone racers in the country and the high performance of their race bikes.

In 2016, Yamaha-Spec V is the team champion while FDR is the tire champion and Yamaha Motor Philippines is the Super Manufacturer champion of the Super Series. This 2017, the Super Series is indeed exciting as last year’s champion will try to defend their titles while new contenders and last year’s participants will give a tough fight for that coveted supremacy and glory.

This year, Honda Philippines is participating in the Super Series via their sponsored race class, the Super Honda wherein the manufacturer will provide Honda RS150 motorcycles. The race class is open for all riders.

For the Super Scooter classes, participants are allowed to use FDR Tires and CST Tires only. FDR Tires are distributed by Infiniteserv International. North Trend Marketing is the official distributor of CST Tires in the country.

Check out www.insideracing.com.ph and www.facebook.com/InsideRACINGMagazineOfficialPage for updates, info and schedule of the Shell Advance Super Series Nationwide Championships fueled by Shell V-Power.