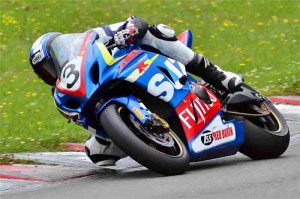 Sloan Frost and his GSX-R1000 dominated the opening round of the 2016 New Zealand Superbike Championship at Mike Pero Motorsport Park in Christchurch, winning all three races as Suzuki riders filled the podium.

Fresh from winning the Formula One class in the three-round pre-national Suzuki Series, the MC2 Racing Fujitsu TSS Red Baron Suzuki rider managed to kick on from that career breakthrough performance to dominate racing in the premier class in the first of four rounds at Ruapuna, that is also recognized as the race to decide the New Zealand Grand Prix title.

Said 34-year-old Frost, “I’ve never taken a win at Ruapuna before, so just coming here and getting such a solid result is great. Then, to win the GP race and earn a major title is great too. The bike has been hooking up well. I nearly ran over a lapped rider at one stage, but it all worked out in the end. I knew the riders behind me were battling hard and I figured that would slow them down too, so perhaps that helped me.”

He added, “Now that I’ve gotten over the mountain of not having won at Ruapuna, now I can build on this at the tracks coming up; ones that I have enjoyed success on in the past.”

It was a Suzuki 1-2-3 in the Superbike class with Christchurch’s former 600cc National Champion John Ross finishing runner-up each time and Hamilton’s nine-time former Superbike Champion Andrew Stroud – the 47-year-old father-of-10 making a comeback to the sport after retiring two years ago – firing up again on a Suzuki GSX-R1000 to finish with a remarkable 3-3-4 score-line to take the third step on the podium.

The series now heads to Teretonga, on the outskirts of Invercargill, for round two next weekend, with a third South Island round a week later at Levels Raceway, near Timaru, on January 24th. The final round is scheduled for Hampton Downs, near Huntly, on March 5-6.