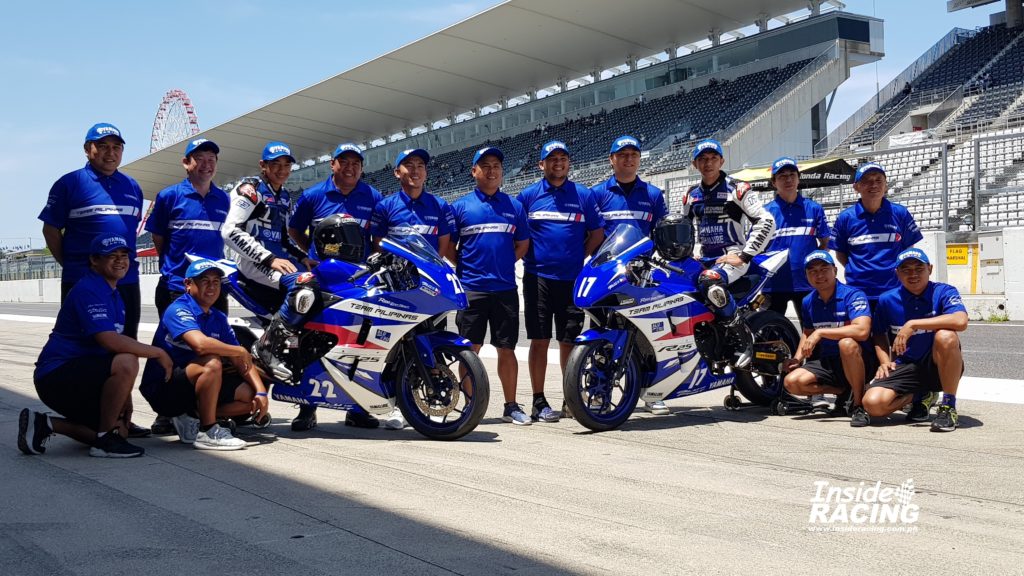 Team Yamaha Pilipinas at Suzuka Circuit for the AP250 race.

The first Philippine contingent to compete in the Asia Production 250 class of the 2018 FIM Asia Road Racing Championship (ARRC) successfully achieved their target goals for the weekend.

Held at the historic Suzuka Circuit in Japan for the third round of the championship, no less than Filipino champions Masato “The Chairman” Fernando from Bulacan and McKinley Kyle “The Wonder Boy” Paz from Rizal competed as wildcard entries for Team Yamaha Philippines. Both used Yamaha R25 race bikes prepared by Yamaha in the hyper competitive AP250 class.

The 2018 season of the FIM Asia Road Racing Championship features a 6-round calendar and the Japanese round is the third race of the season. 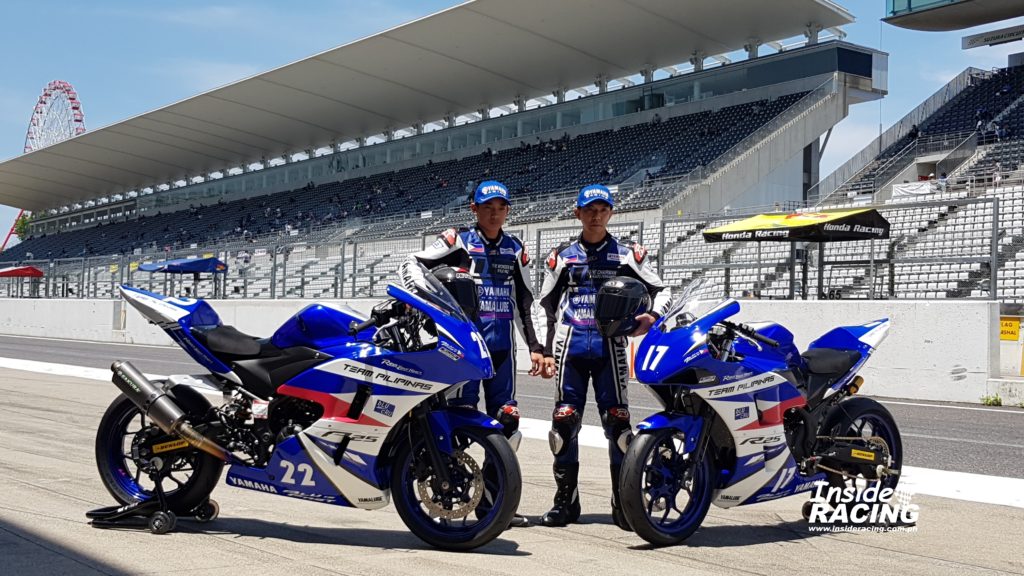 It was not the first time that Filipino riders will compete in the ARRC this year. Paz was also a wildcard in the UB150 class in the season opener in Australia last April where he finished an impressive 2nd for team UMA RACING and Racing Boy. Fernando is competing in his first ARRC race but has won an an international race in Taiwan last year. 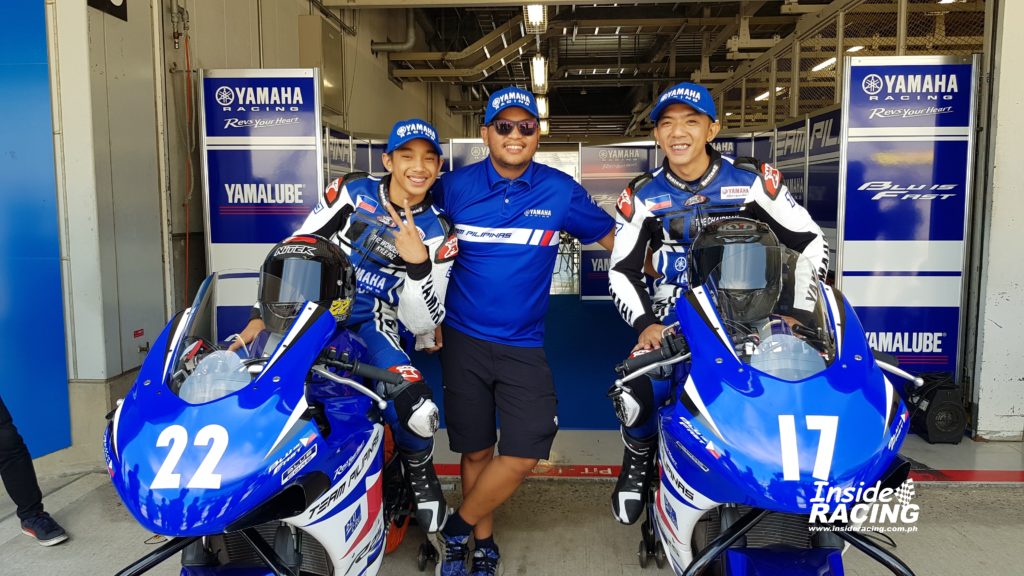 “The wildcard appearances of both riders are part of their rewards for being Yamaha GP champions in 2017,” said Yamaha Motor Philippines’ Mr. Jude Camus who led the 14-man contingent together with Mr. Jordan Cornista, Mr. Emerson Mendoza and Ms. Jenifer Perey.

Aside from being YGP champions, Fernando who races with Yamaha-Spec V at home is the 2017 National UBK and MotoIR Champion plus the double 2017 Nationwide Super Series champion in both the Underbone and Scooter classes.

Meanwhile, Paz who races for Phoenix-Yamaha-KOSO-Faito locally, is the reigning SS300 Pirelli Cup champion on an R3 and also a PSR and IRGP champion last year. He is one of the youngest and talented road racers in the Philippines now with international race experience including the Asia Talent Cup.

Both riders race locally using the Mio, Sniper, R15 and R3 for a few years now and have developed their talents on the blue machines.

The plan and setup for the weekend  was not an all-out effort to win for the first time. The current AP250 class is probably one of the really competitive classes in the series. It takes years of experience and track mileage in order to be competitive in the series.

Yamaha Motor Philippines (YMPH) expressed that the wildcard weekend was only the first step of many and they hope to come back to the series on a full time basis next year. 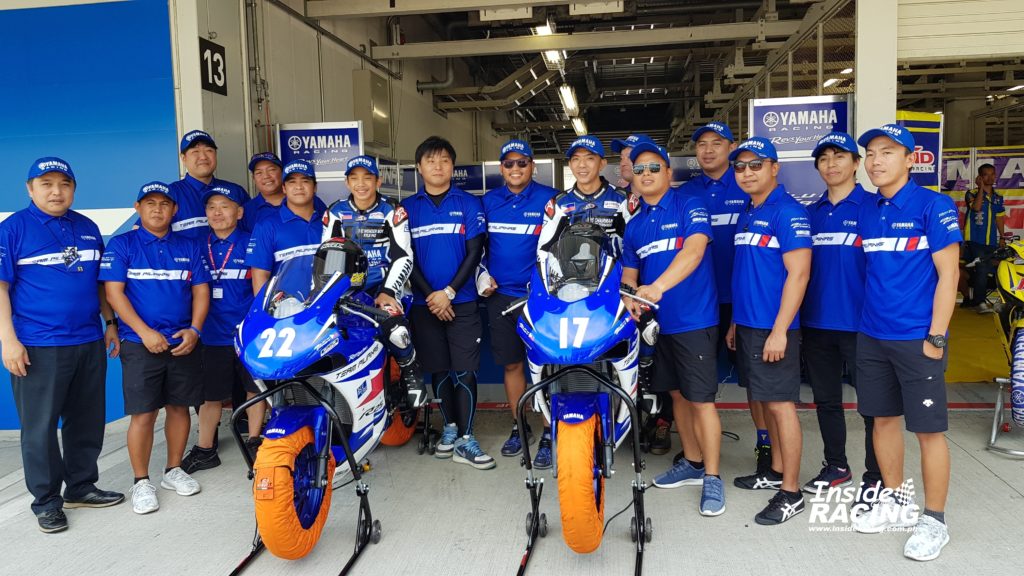 The “Blu Cru” was a combined effort by YMPH and YMC.

The team was a combined effort between YMPH and Yamaha Motor Company of Japan (YMC). YMC wanted to see how the riders and the local mechanics cope in the AP250 class. It was a steep learning curve for everyone. The bikes were set up not to be the fastest in the field but to be reliable and fast enough so that the riders can learn the track and adjust their riding styles to these types of bikes. 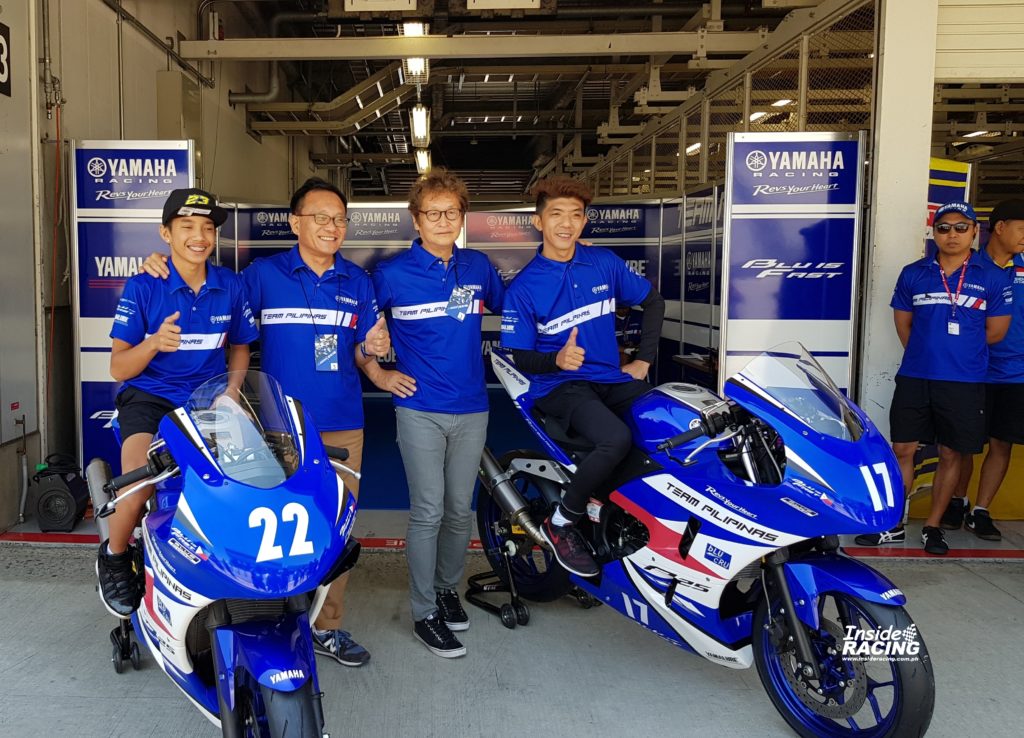 Past YMPH Presidents, Mr. Takeda (beside Masato) and Mr. Yano (beside Kyle), both showed up on Saturday to show support for Team Yamaha Pilipinas, the dream which both gentlemen promised more than a decade ago.

At the beginning of the weekend, the team established goals of finishing safely for both riders, achieving a target lap time of 2:32s and a mid-pack finish at best. These goals were based on the riders’ experience and the tune of the bike. 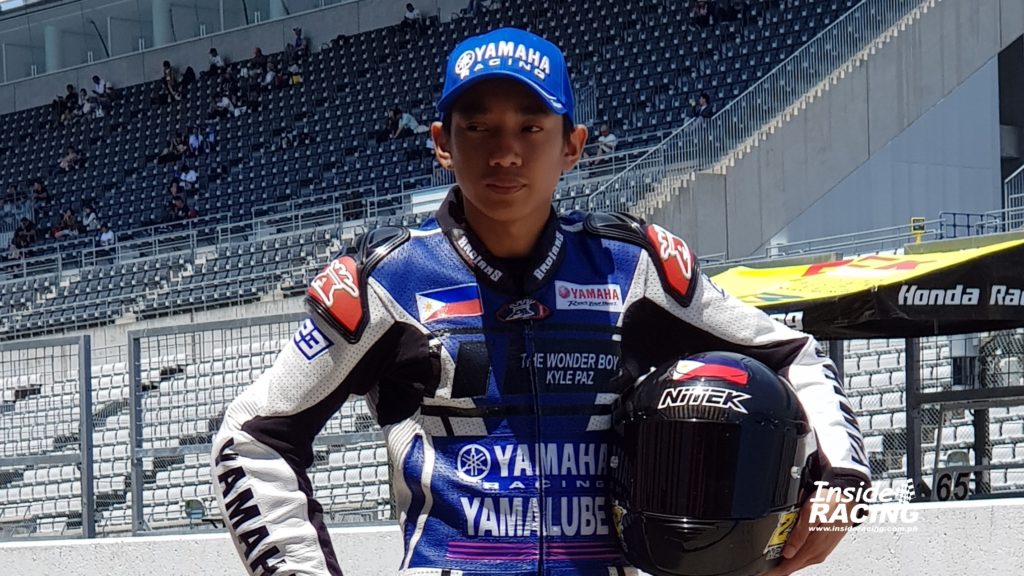 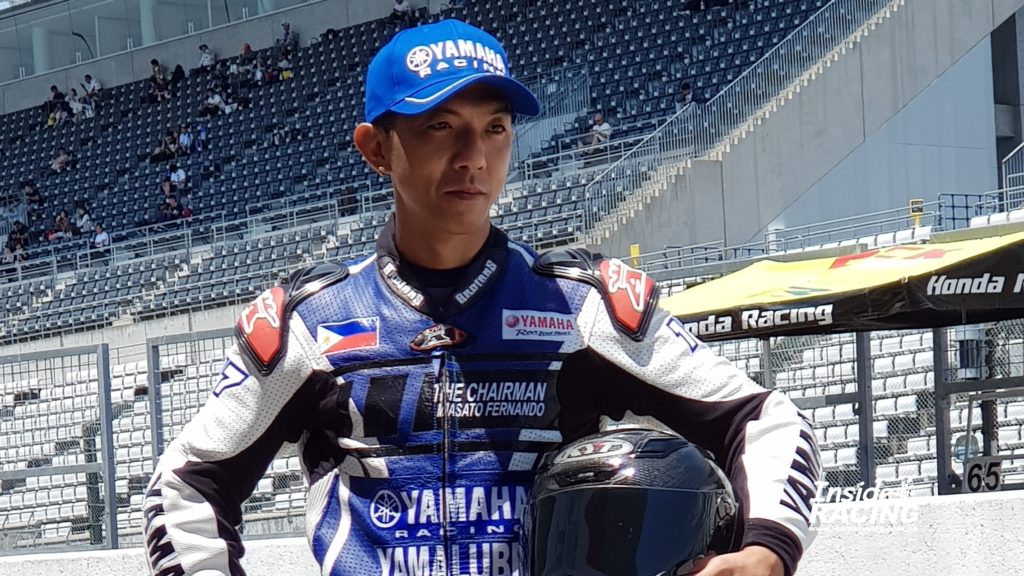 On Friday Practice 1, both riders were still learning the track as it was raining when they had their first test back in May. Paz managed to drop his time in the 2:34.731s when following faster riders and eventually placed 21st with a time of 2:34.731s . Meanwhile, Fernando ended in 25th place with a time of 2:35.760s after stopping early in the sessions to adjust his leathers, boots and shifter. Masato was not able to get a clear lap because of problems. The fastest rider was Indonesian Rheza Danica Ahrens out of 33 riders. 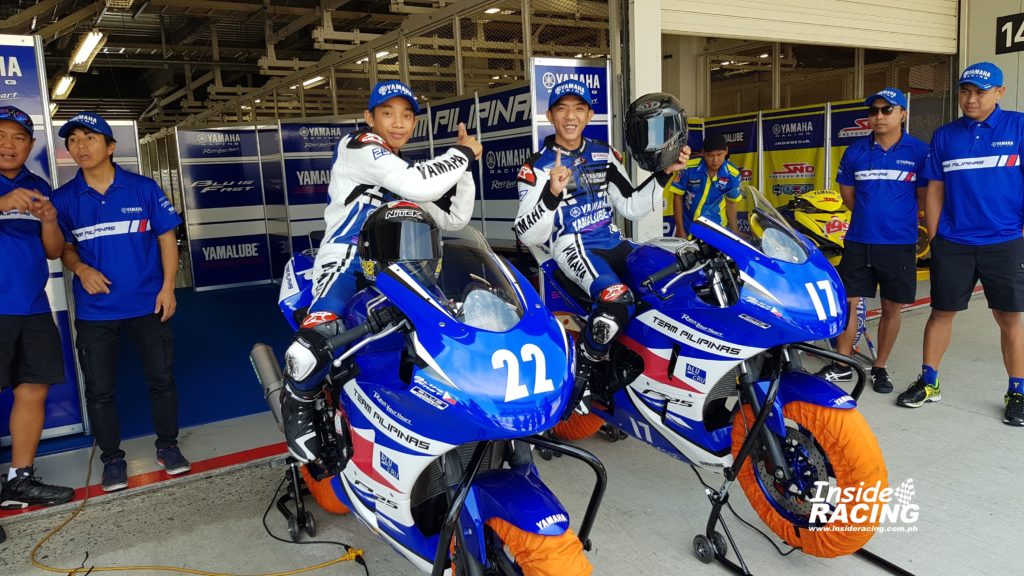 In the afternoon Practice 2, everyone went a little slower including the fastest riders. Maybe all had new bike settings to try and experiment in their bid to go faster. Paz and Fernando both felt the bikes slower with the different gearing the team had tried. Paz also did not like the rear suspension. Both ended lower in the standings. The team plans to revert back to the original engine and gear settings for the next session. By this time, both riders knew that they needed to be riding close to the faster riders so they can get a tow around the track.The Japanese team members also noticed that Sato’s and Kyle’s riding positions need some adjustments in the corners to be smoother and not ride it like an underbone. 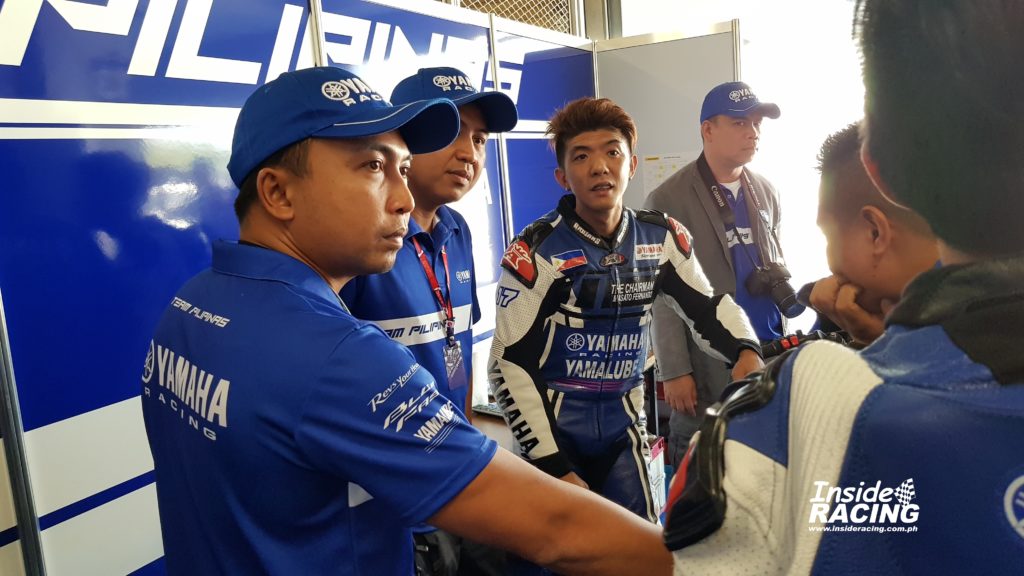 For Practice 3, the team was happy because both riders went faster with Paz hitting the team’s target lap time of 2:32s. He was happy with the settings and improved his top speed to 190kph whereas before both were just hitting 180kph on the fastest part of the Suzuka Circuit. Meanwhile, Fernando also shaved almost 2 seconds from his time but still want suspension adjustments. Both are confident that they can still improve for  the QTT. 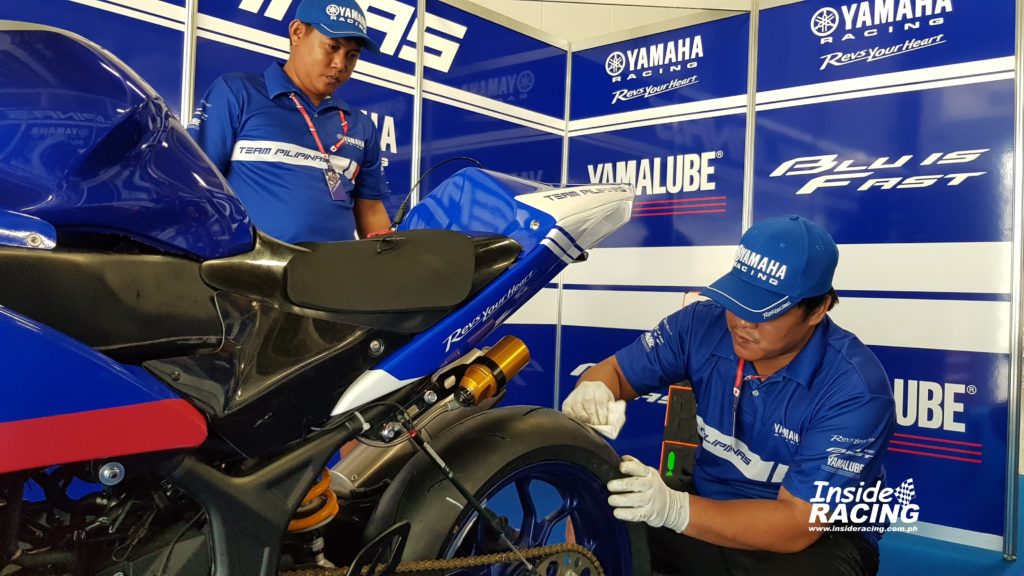 Riders focus on the track while Blu Cru mechanics’ focus is on the bikes.

The team had a mixed QTT session on Saturday. Paz again registered a 2:32s lap time and still placed 21st but he went almost half a second slower than his fastest practice lap. Meanwhile, Fernando registered his fastest time so far in the weekend and placed 24th but he missed the target time by 2 tenths of a second. Both riders were feeling good about the track and the bike.

It was also good to note that up to now, despite the immense pressure to do well, none of our riders have crashed. The mechanics can work on the bikes’ setting instead of repairing crash damages. It was a sign of how good and matured our two riders are. 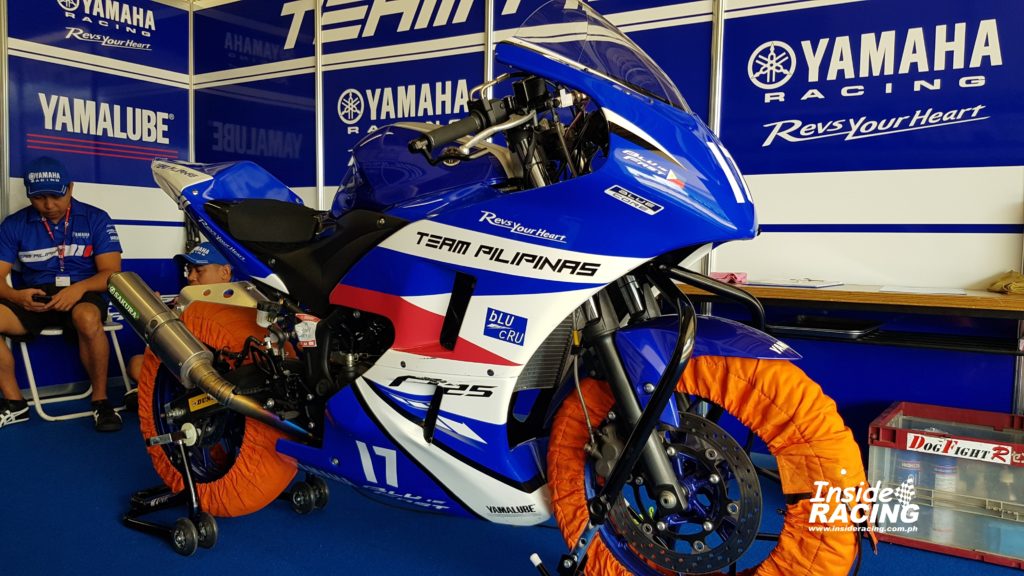 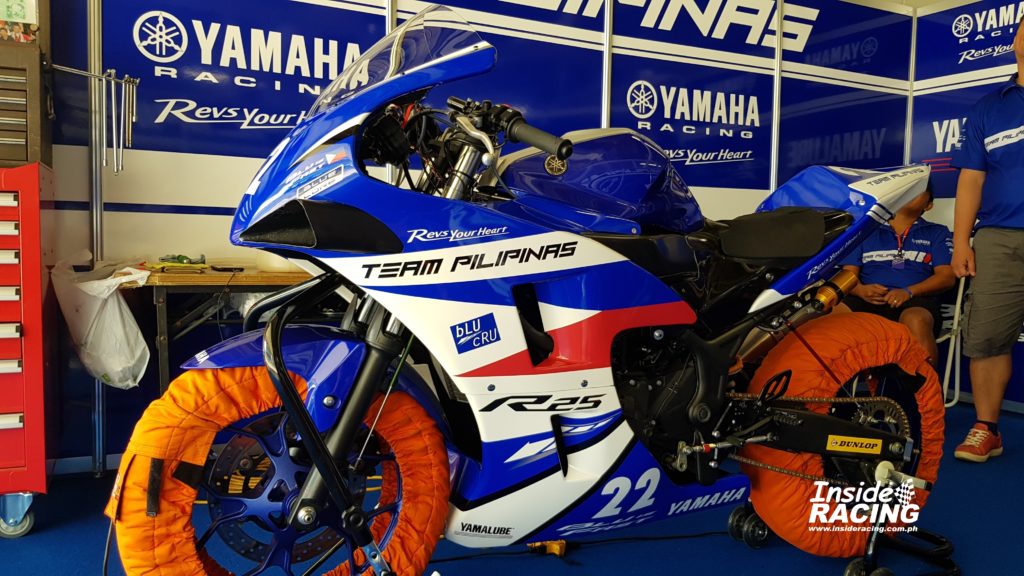 After Race 1, both riders earned the respect of the Japanese mechanics as Sato and Paz made good starts and both battled for 19th position after a few laps. Unfortunately, Paz ran wide and dropped down to 29th before recovering to 27th. Fernando continued his march to the mid-pack and eventually finished in 17th place, achieving the team’s goal. More importantly, both riders achieved best lap times of 2:32s confirming their progressive pace.

Race 1
Sato – Finished 17th, Best Lap Time: 2:32.234s
“I felt pressured before the start because I don’t know what to expect since it’s the first time that I will be racing with them. But I psyched myself and focused. I managed to overtake some riders until I arrived in 17th position. I’m happy of my finish and glad that both of us finished safely.”

Paz – Finshed 27th, Best Lap Time: 2:32.706s
“We tried to work together to get closer to the riders in front . Unfortunately, I had a problem with my rear suspension when Sato and I exited a corner and my rear tire slipped and lost a few positions. But I managed to climb up again. For Race 2, I think we can do better because Sato and I can see that we can be at their pace.” 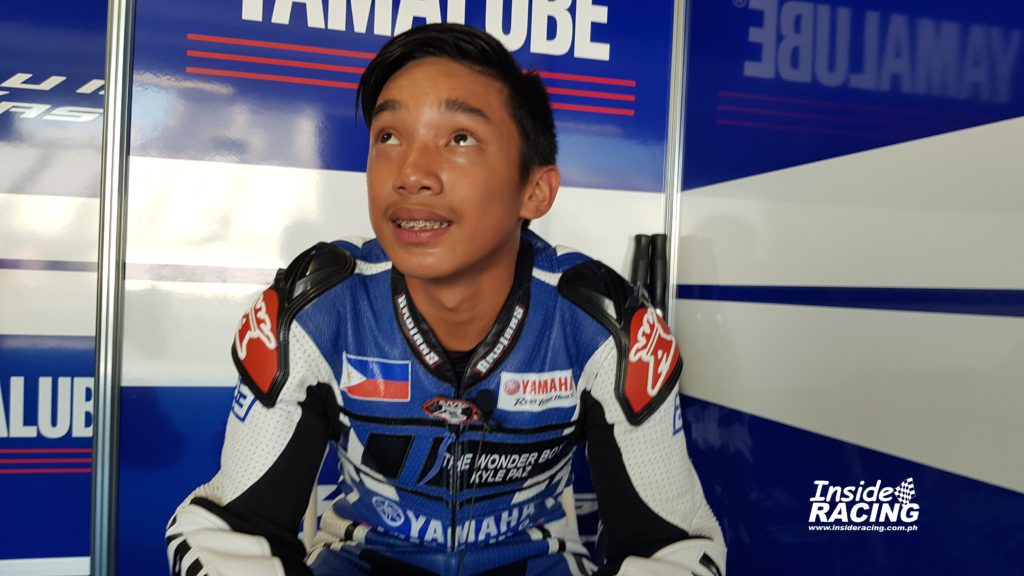 Kyle: “We tried to work together to get closer to the riders in front.” 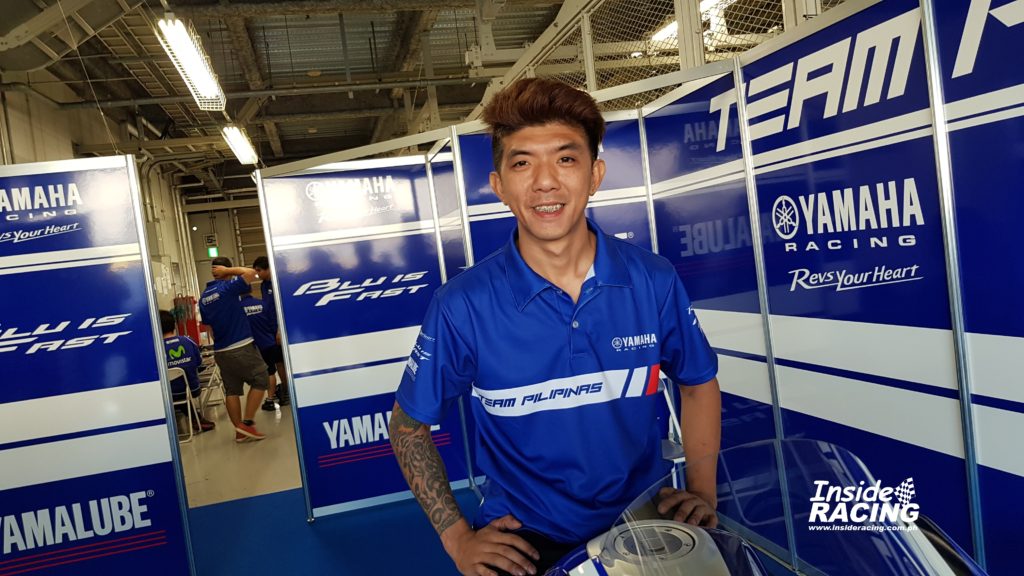 Sato: “I’m happy of my finish and glad that both of us finished safely.”

The team still worked the whole afternoon on the setting of the bikes with the data collected from Race 1. In every track outing, there is always something to learn. On Sunday, the ARRC event was in full swing and there were more people. Team Philippines had their official photos taken by the organizers in the morning and the team looked very good and sharp. During the Pitlane Walk, many people took pictures of our two riders. In the race, it was exciting as Fernando battled all the way up to 17th position again until he crashed on the last lap in 5th gear! He was fighting with a group of 5 riders until then. He eventually finished in 28th position, 1 lap down. Meanwhile, Paz had his best race finish of 23rd but had problems in the race. He also managed to overtake riders in the race.

Race 2
Paz – 23rd
“I had a bad start and lost two positions. I managed to overtake them back but a few laps later, a couple of riders crashed in front of me and I lost contact with Sato’s group. Despite my problem, I pushed on to finish. The competition here is tough and on a different level. Thank you Yamaha Philippines for the opportunity to race at this level.”

Fernando – crashed, finished 28th
“At the last lap with just a few corners to go, I overtook the leader of my pack. I tried to put more speed on the next corner to break away but my rear tire broke traction. I wasn’t able to control it and crashed. Anyway, this is a different level. Back home I usually give my 100%. Here, I feel it is not enough! It’s an unbelievable feeling that I will never forget! Thank you to all my friends and supporters back home, to everybody who supported me in this trip and of course to Yamaha Motor Philippines for letting me race here at the ARRC!” 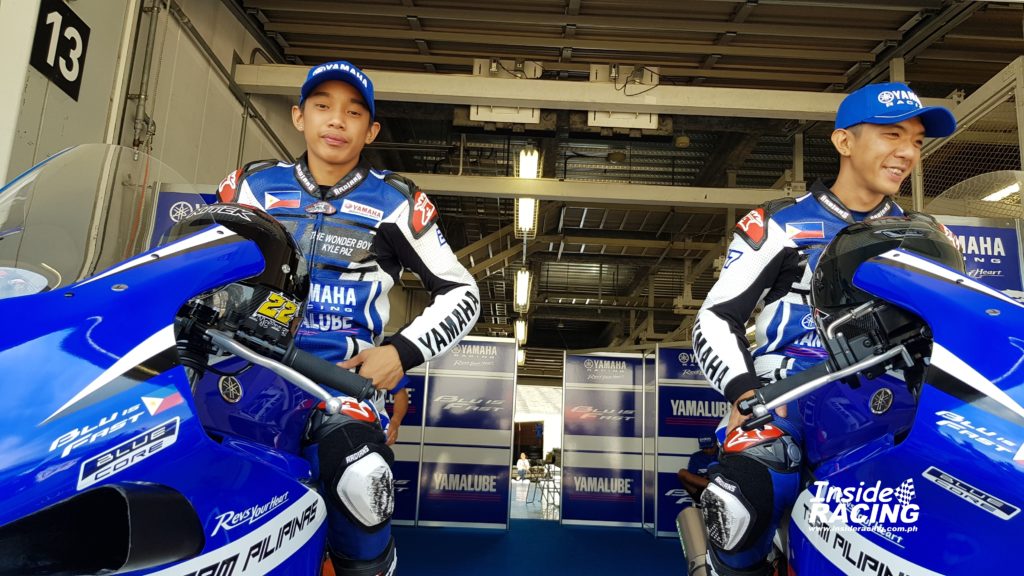 Sato and Kyle: “Thank you to Yamaha Motor Philippines and to all our fans and friends back home who supported us!”

The weekend was made possible by Yamaha Motor Philippines. Team Yamaha Pilipinas’ Manager Mr. Jordan Cornista summarizes, “The mechanics did a very good job this weekend despite the very strict and hectic schedule of an international race. For the riders, I am proud of what they have accomplished because competing at this level is no joke, especially for first timers. As for the team, we still have a lot to learn and we will continue to do so because we hope to come back here next year. For everybody at home who supported Team Pilipinas here at Suzuka, thank you very much!” 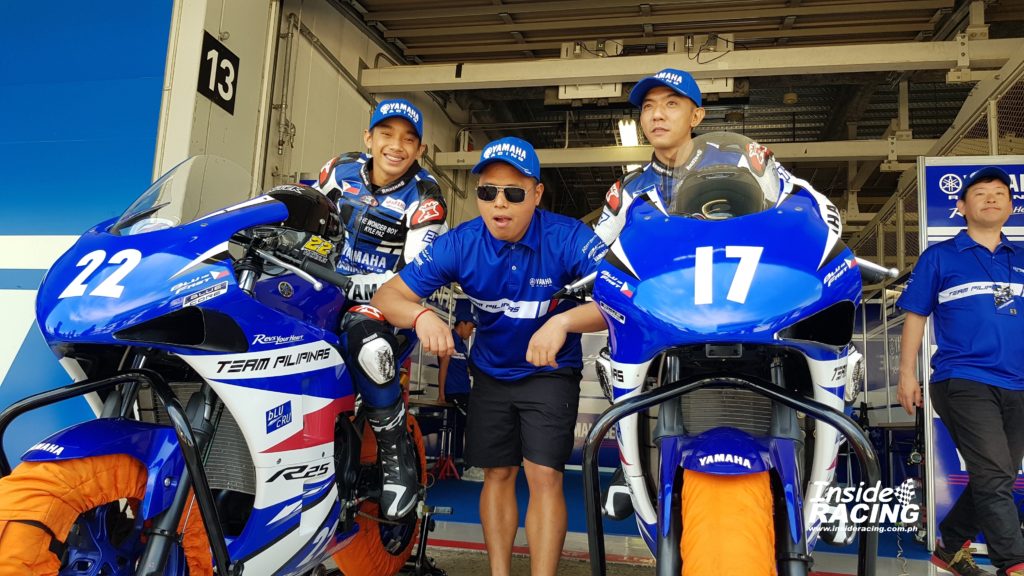 Team Pilipinas’ Manager Mr. Jordan Cornista: “I am proud of what they have accomplished because competing at this level is no joke, especially for first timers.” 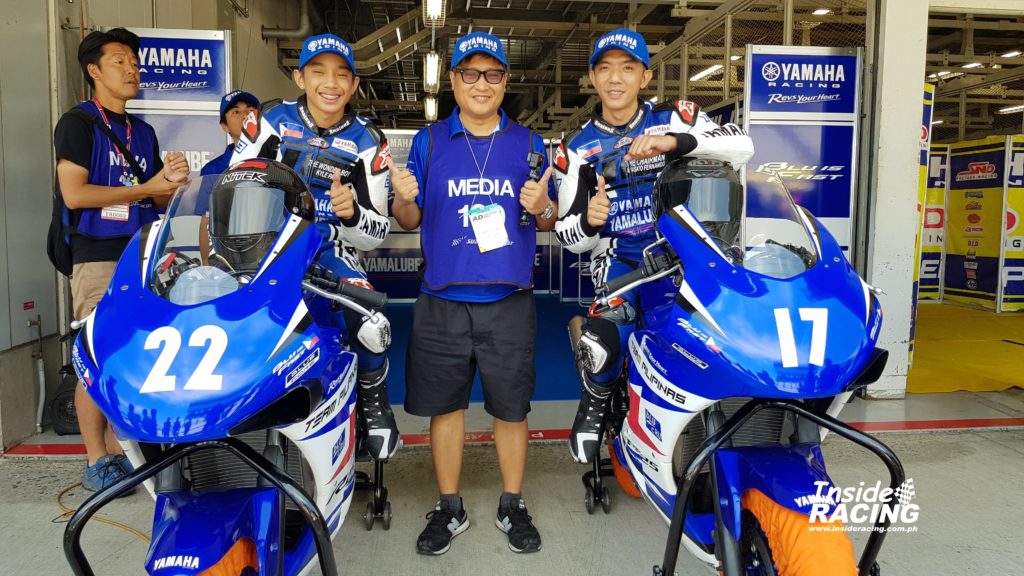 InsideRACING was fortunate to have been invited to personally witness the weekend. Check out our “behind the scenes” videos, live feed and interviews on our Facebook Page and watch out for the full report in our magazine.