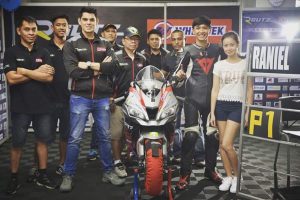 Clark, Pampanga – 2015 Pirelli Philippine Superbike Champion Raniel Resuello of Team RGutz -Wheeltek powered by Kawasaki , will start from Pole Position on his Kawasaki ZX-10R for today’s Races 5 and 6 of the 2016 PSBK Championship at the Clark International Speedway (CIS). It was Resuello and Kawasaki’s first PSBK Pole Position of 2016.

He registered the fastest time in a very wet qualifying round that saw Race 3 winner and CIS specialist BMW’s Marvin Mangulabnan high side and crash.

With his team owner actor Richard Gutierrez supporting him in pitlane, it was the a great return to form for the two-time national champion Reseullo who suffered an arm injury during practice in the first round last April and had to race the first four races  injured, focusing only on scoring important championship points.

Second on the grid will be Ducati-ENEOS rider Paul Mark Doblada on Ducati Panigale followed by  Dashi Watanabe of WRD Racing- Kawasaki Leisure Bikes on a Kawasaki ZX-10R, and current championship leader Ducati-Bacchus’ TJ Alberto on a Ducati Panigale.

Meanwhile,  BMW Motorrad’s Marvin Mangulabnan will start from the back of the grid on his BMW S1000RR in today’s races.

The champiomship is proving to be very competitive this year with the threeanufacturers Ducati, BMW and now, Kawasaki all claiming Pole Positions in the first three events.

The 2016 Pirelli Philippine Superbike Championships is part of the ENEOS Phil Motorsports Championships organized by the Batangas Racing Circuit. It is sanctioned by SBRA,  an affiliate of FETAP. Photo credit: Raniel Resuello