The qualifying time trial of Round 4 of the Suzuki Asian Challenge (SAC) was held on August 6. Team Suzuki Pilipinas riders had good results as April King Mascardo placed 4th with a time of 2:00.307s. Eane Jaye Sobretodo aso had a decent showing by placing 6th in the QTT after having a best lap time of 2:00.363s which was faster than his times in the two practice sessions. Mario Borbon Jr. who unfortunately crashed was 11th with his 2:01.984s. 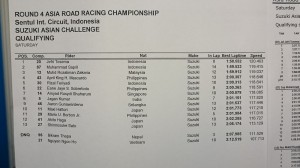 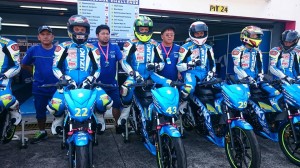 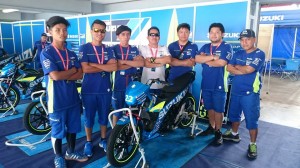 Jefri Tosema from Indonesia got the pole position in tomorrow’s race as he submitted the 1:58.552s best lap time in QTT among the 15 participants of the SAC.

Team Suzuki Pilipinas will have sprocket adjustments to have lower lap times in the races. Mascardo, Sobretodo and Borbon Jr. were all determined to give good performances for the country and hopefully bring home another win and good results. The team is staying focused and positive and is grateful for the support and prayers the Filipino racing fans are giving them. Mr. Hiroshi Suzuki, President of Suzuki Philippines, personally traveled to Indonesia to support Team Suzuki Pilipinas. 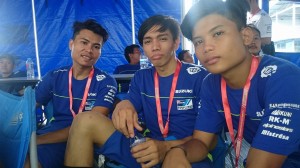 15 riders from different Asian countries are going to compete in the Suzuki Asian Challenge races on August 7 at the Sentul International Circuit in Indonesia. Good luck Team Suzuki Pilipinas!