The Philippine flag was seen at the podium again in the fourth round of the Suzuki Asian Challenge in Indonesia last August 7 as April King Mascardo of Team Suzuki Pilipinas remarkably delivered a third place finish for the team. Mascardo was able to stay with the lead pack in the 8-lap race held at the Sentul International Circuit. Aside from his podium finish, Mascardo also impressively had the 1:59.572s fastest lap time in Race 2. 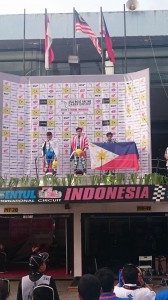 April King Mascardo proudly holds the Philippine flag at the podium during the awarding ceremony of Race 2 of the Suzuki Asian Challenge which had its fourth round in Indonesia. Mascardo placed third in Race 2. 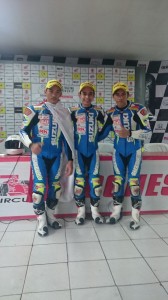 Eane Jaye Sobretodo also battled in the lead pack and fought with the Indonesians until the 5th lap. He finished the race in 6th place. Mario Borbon Jr. was also part of the lead pack at the start of the race but when it came to the chicane, he almost overshot. Borbon Jr. then settled for 8th place. It was a good performance for Team Suzuki Pilipinas as our three riders showed they can battle out with other Asian riders and Mascardo, Sobretodo and Borbon all finished inside the top ten. 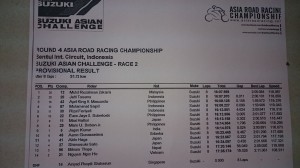 In Race 1 which also had 8 laps, Mascardo had a tight race with the Indonesians. He overshot in a turn in Lap 5 but was able to finish in 5th place. Mario Borbon Jr. had starting problems which made him unable to be with the lead pack and ended up at 9th place. Sobretodo was in the lead pack and was fighting for the win but after contact with an uneven surface of the track he overshot and tried to chase the leading riders but crashed and finished in 11th place. 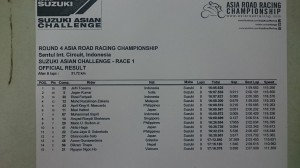 Jefri Tosema of Indonesia was the winner in Race 1 while Muhd Rozaliman Zakaria got the victory in Race 2.

Overall, it was still a good showing for Team Suzuki Pilipinas and they brought honor to the country once again. The team showed that the Philippines is a force to be reckoned with in racing and we are gaining attention the of  foreign teams, riders and race fans. 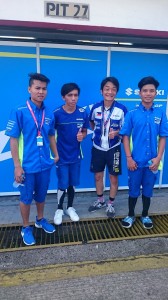 Suzuki Philippines’ President Mr. Hiroshi Suzuki  was present to support and watch our riders Mascardo, Borbon Jr. and Sobretodo. President Suzuki is excited watching the races and is very happy with the effort of our racers and the rest of the team. Mr. Noel Villando of Team Suzuki Pilipinas is the manager of the team and mechanics are Mr. Bobby Mencias, Mr. Manuel Chien and Mr. Rico Cagnaan. 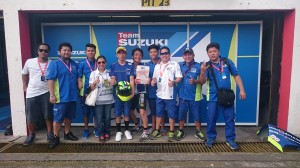 The next leg of the Suzuki Asian Challenge is in Thailand.