IR Update : Sobretodo and Borbon makes it a Pilipinas 1-2 finish in Japan! 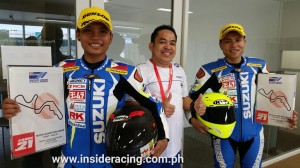 Suzuka, Japan – History is again made as two Filipinos stood on top of the podium here at the Suzuka Circuit for Race 1 of the 2016 Suzuki Asian Challenge. Eane Jay Sobretodo of Luzon and Marion Borbon Jr. of Visayas finished 1st and 2nd ahead of Maxi Hattori of Japan who finished 3rd. It was the first win of a Filipino and the first 1-2 finish by the Philippines in SAC and ARRC competition. 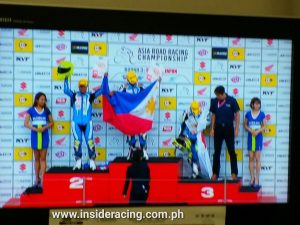 Even before the race, the third Filipino rider started the history making weekend as April King  Mascardo of Mindanao took the first Pole Position. He got the holeshot and was engaged in a heated battle between the two Indonesians Tosema and Safril. They were joined by Sobretodo,  Borbon and Hatorri with a lap to go as the leadinhg trio tried to out draft each other. Sobretodo actually took the lead at some point on the last 2 laps. It became a 4 way battle for the lead! Unfortunately,  on the last chicane Marcardo and Tosema touched taking Safril with them. This paved the way for EJ who was close enough to take advantage. Borbon followed shortly. Mascardo remounted and was able to salvage 7th place. 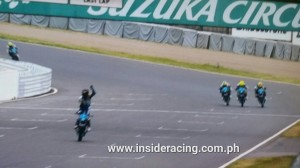 Chills went down the back of the Filipino journalists present and Team Suzuki Pilipinas members as the Philippine National Anthem was played on the podium! 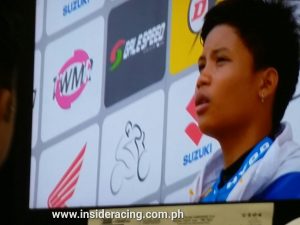 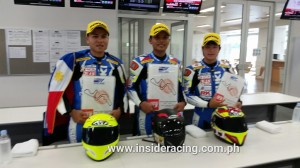 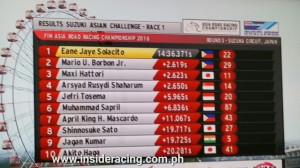