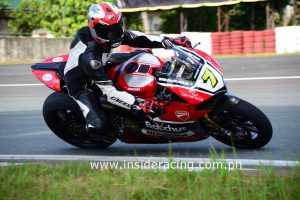 After  trailing the BMW of  Mangulabnan in the morning race, championship leader TJ Albetro of Ducati-Bacchus reasserted his position by winning the afternoon Final race of the 2016 Pirelli Philippine Superbike Championships’ second leg last June 12 at the Batangas Racing Circuit. 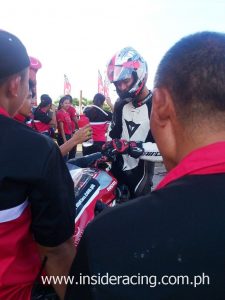 TJ happily welcomed in his paddock after the race

Mangulabnan’s S1000 RR shadowed Alberto’s Panigale R for most of the race and actually took the lead on the penultimate lap. But Alberto was quick to respond and reclaimed the lead and held on to win  the Expert and Intermediate classes by less than a second. 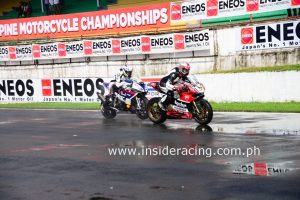 TJ ‘s father Toti Alberto also once again  finished runner-up to Congresman Ronald Singson of BMW- Partas in the Master’s Division. His younger brother Troy placed third in the Intermediate class and second in the Novice category. Winner in the  Novice class was Paul Mark Doblada who races for Ducati-Eneos.

It was the young Alberto’s third win out of four races so far. Last year’s Novice and Intermediate champion has proven that his first round form was no fluke and that he is more than capable of leading the Ducati-Bacchus Team to another championship this year.