The Jet Riders Club, proud owners of SYM motorcycles conquered Bicolandia last February 22-25.The group explored the different sights and attractions of the Bicol region and the 3-day ride has deepened the camaraderie and bonding of the club. 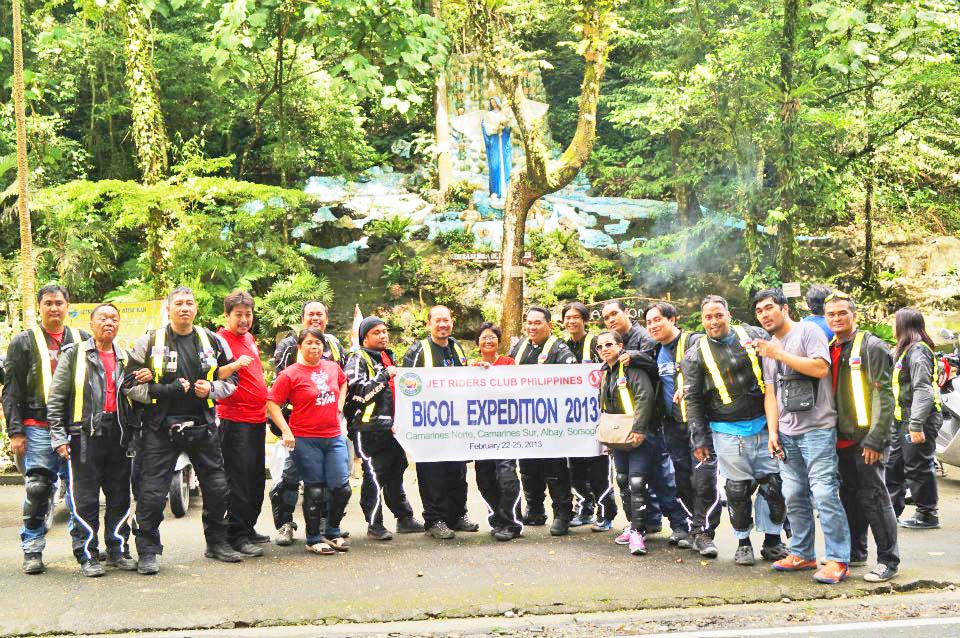 Everything went as planned. It was a rainy Thursday night, at 11:00 pm on Feb 21, 2013 at the Shell Station in Magallanes, Makati City.

First there was one, and then there were three. After 30 minutes, more riders arrived and filled their gas tanks with fuel to the brim.

At 12:30 am of Friday, February 22, twenty-one riders whose spirits were not dampened by the bad weather started their engines and with lights and raincoats on, took-off for the Bicol expedition, traversing the service road of the SLEX.

The riders were surprised by the unfinished road constructions along the Maharlika Highway of Laguna and Quezon. Adding to the darkness of the night, potholes and slippery pavement caused by the rain made some riders fall down from their motorbikes causing minor damages to their motorcycles.

At 3:30 am, the group arrived in Lucena and filled their gas tanks with fuel while others took some refreshments at the Total gas station. Still dark and raining hard, the group decided to take some rest and waited for the sky to brighten up a little so it will be easy for the riders to see the road ahead. 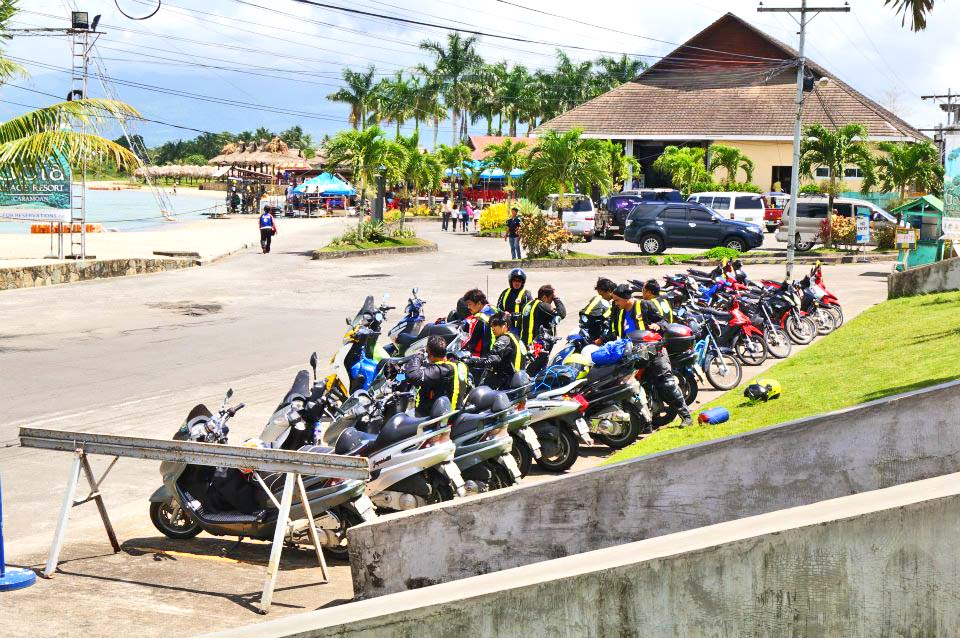 At 5:00 am, the riders continued their ride and as the sky brightened up a little, they reached the entrance of the “EME” road and took a magnificent view of the forest park and “zig-zag” road to Atimonan, Quezon.

They arrived at 8:30 am in the town of Gumaca in Quezon and had their breakfast at a seaside restaurant. A plate of special laing and a hot soup of yellow fin tuna made the riders feel warm despite the cold of the rain. 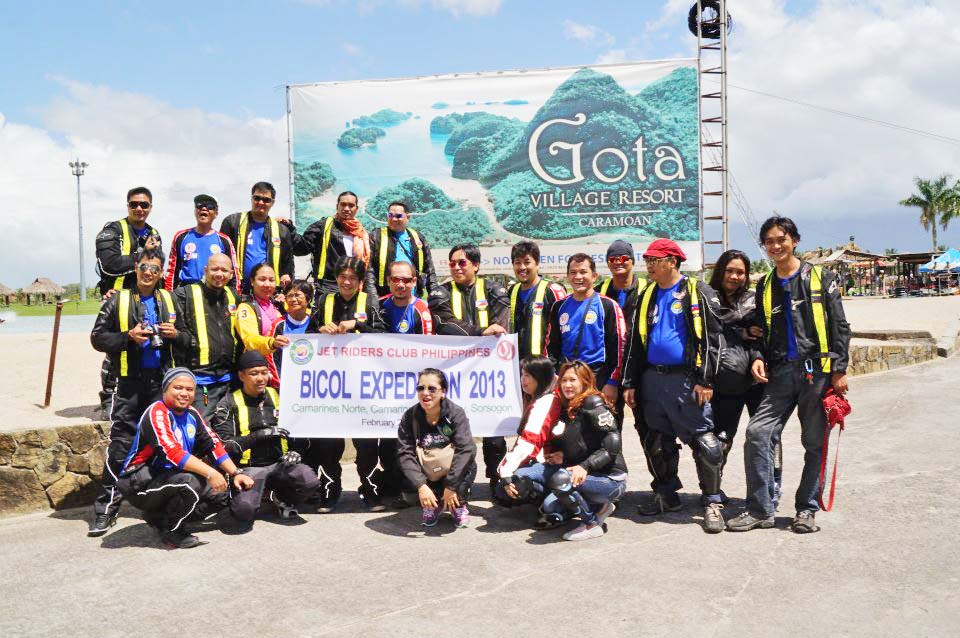 The riders reached the highway boundary of Quezon and Bicol at 11:30 am. A sign that says “Welcome to Bicolandia” was in sight as the group took some photo ops. From Sta. Elena, Camarines Norte, the group did a motorcade from the arch of the Bicol region to the entrance of the Quirino highway going to Camarines Sur. Seeing the group, all in SYM Motorbikes, the people were cheering and yelling as if some celebrities were visiting their place. 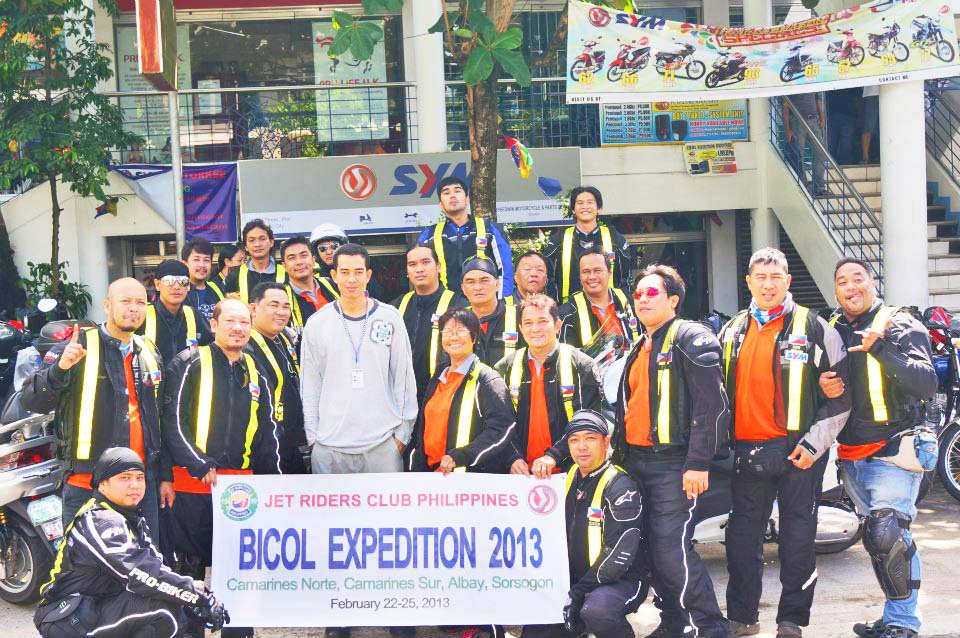 At 2:00 pm after having lunch, the group continued their ride and was welcomed by more muddy pot-holed rough roads and unfinished constructions along the Quirino highway that made them ride at a slower pace.

The riders arrived in Sipocot, Camarines Sur at 4:30 pm and had a brief stop at a Petron gas station to take some rest.

By 5:00 pm, feeling refreshed, the riders continued their ride to Naga, Camarines Sur.

After arriving in Naga at 6:00 pm, the group visited the Basilica of Our Lady of Peñafrancia to pray and give thanks for the safe journey considering that no one had slept all day long and the night before. 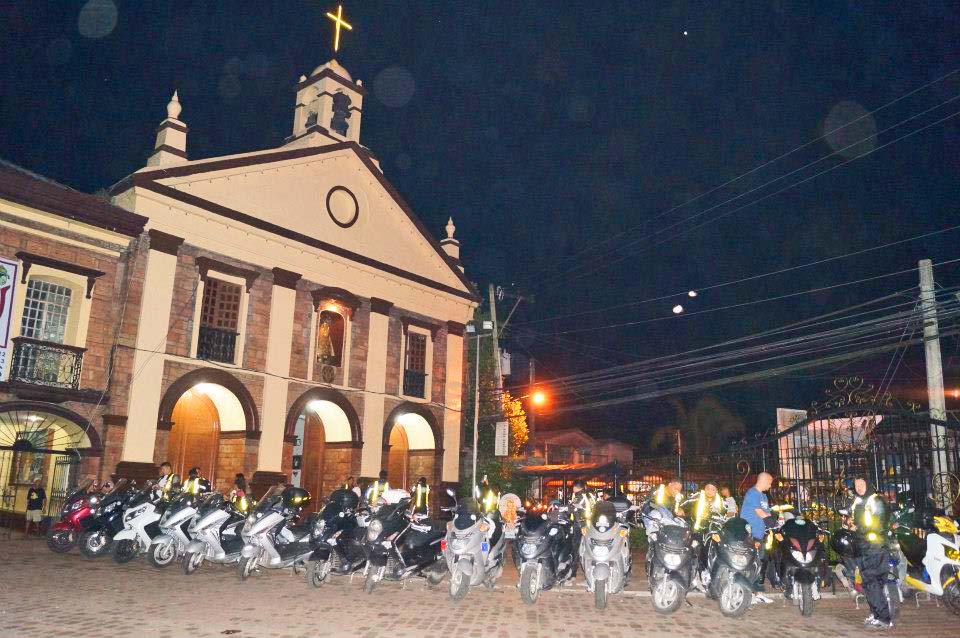 The group arrived at 8:30 pm in Bato, Camarines Sur and they went to the ancestral house of co-member Albrich Espinola where they stayed for a much needed rest.

After breakfast, the riders were on the go again and had a motorcade from the town of Bato up to Poli and visited the SYM dealer in Ligao, Albay. 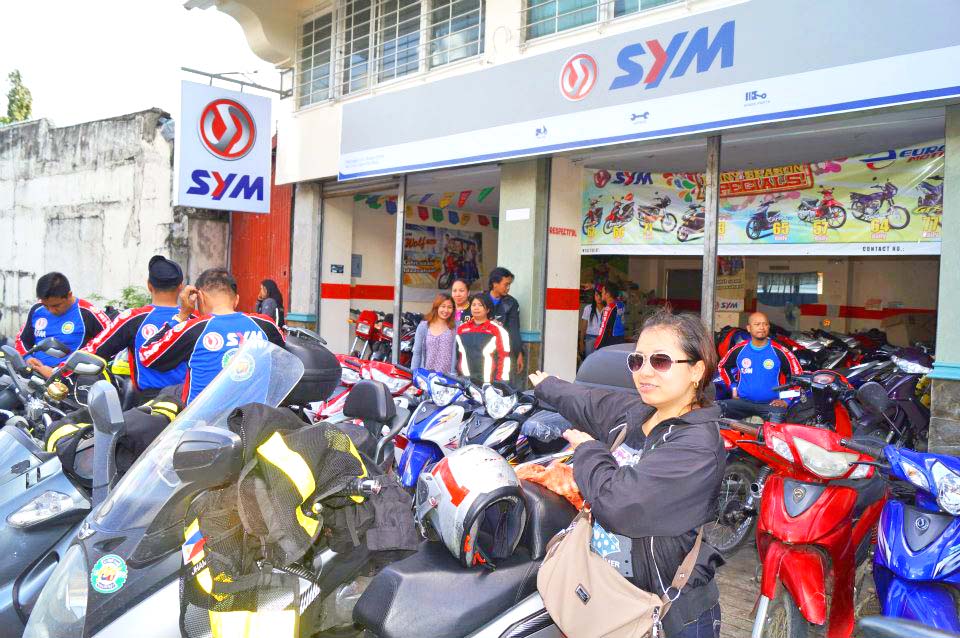 At 3:00 pm, from Ligao, the group visited the SYM dealer in Tabaco, Albay whose mechanic was formerly assigned in Mitsukoshi Motors Philippines, Inc.’s head office in E. Rodriguez Ave., Quezon City. After the motorcade and visiting some tourists’ spots in Camarines Sur and Albay, the group took off for Sorsogon, a three-hour ride of good roads and twisties from Legaspi. 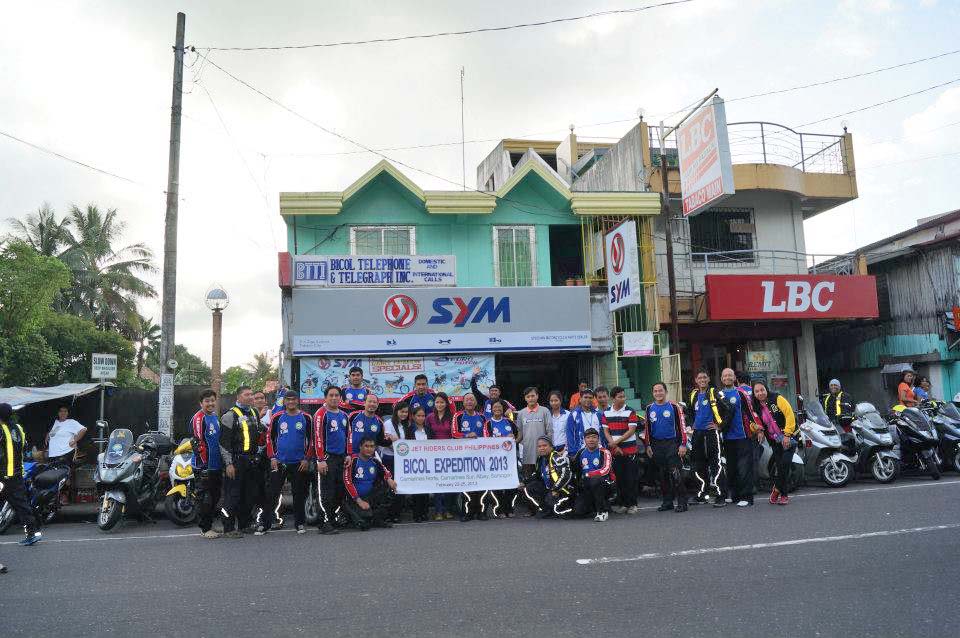 The group arrived in Rizal Beach Resort in Gubat, Sorsogon at 6:30 pm for an overnight stay and bonding time.

After having fun in the beach, the Jet Riders had a motorcade again at 11 am and visited the SYM Branch in Rizal Avenue in the town of Sorsogon, which was open even it was Sunday.

After lunch, the group rode back to Albay to visit more tourists’ spots like the Daraga Church and the Cagsawa ruins. 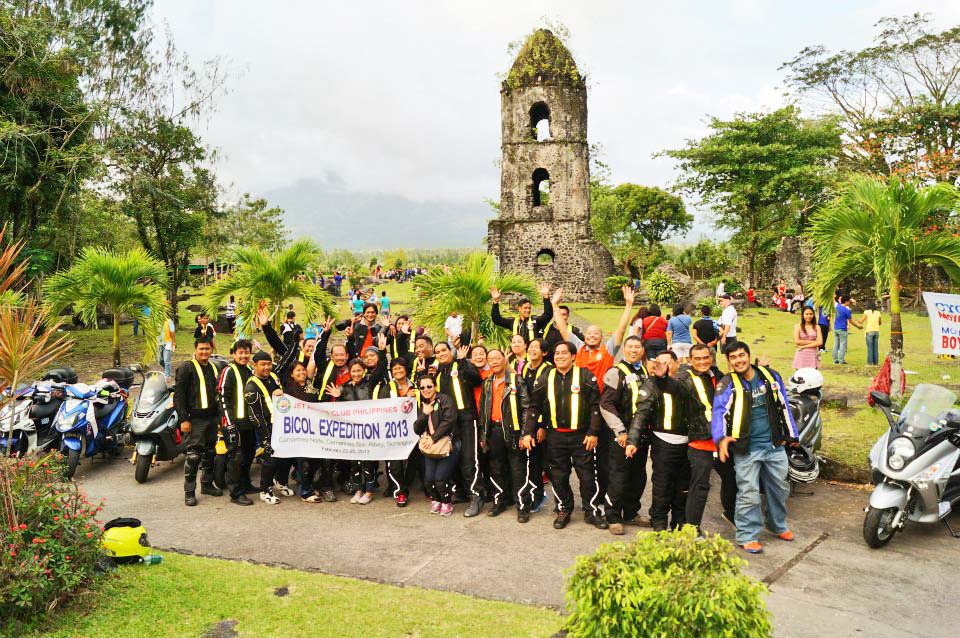 The group arrived at 8:00 pm in Bato, Camarines Sur for another overnight stay at their co-member’s ancestral house where a meeting and assessment of the ride was held.

At 4:00 am, the Jet Riders took off from Camarines Sur and headed to Manila passing by the same route they had when they went to Bicol.

With the sky clear and the sun up at 8 am, after riding along the bumpy road of the Quirino highway, the Jet Riders had their breakfast in Tagkawayan in Quezon. Going back to Manila, the group decided to take the “back door” of Quezon and Laguna passing by the towns of Pagbilao, Tayabas and Lucban where the group had their lunch. 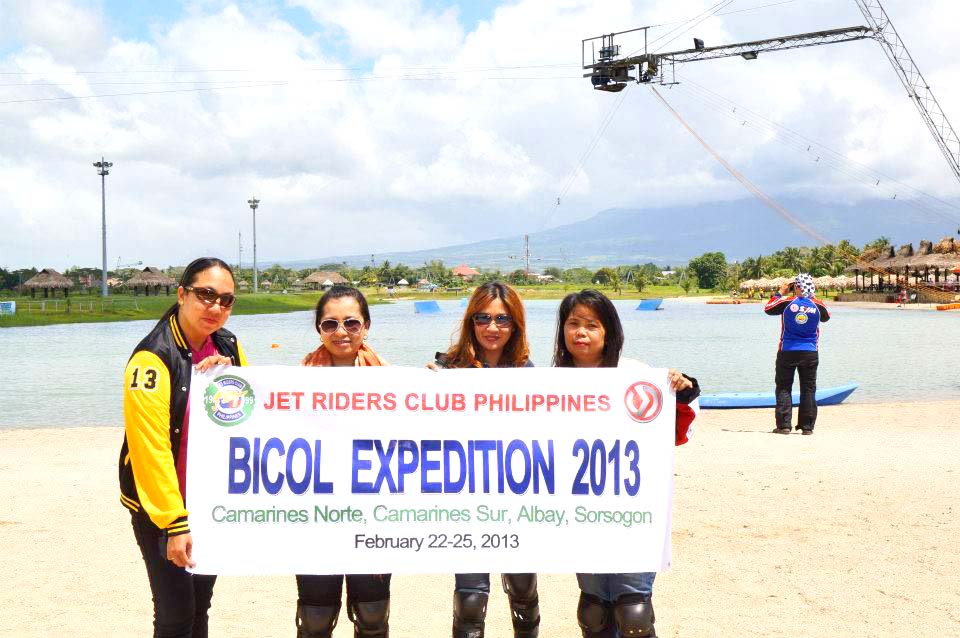 After having lunch in Lucban, the group rode the hills of Luisiana and Cavinti at 3 pm and arrived in Caliraya, Laguna in less than an hour. 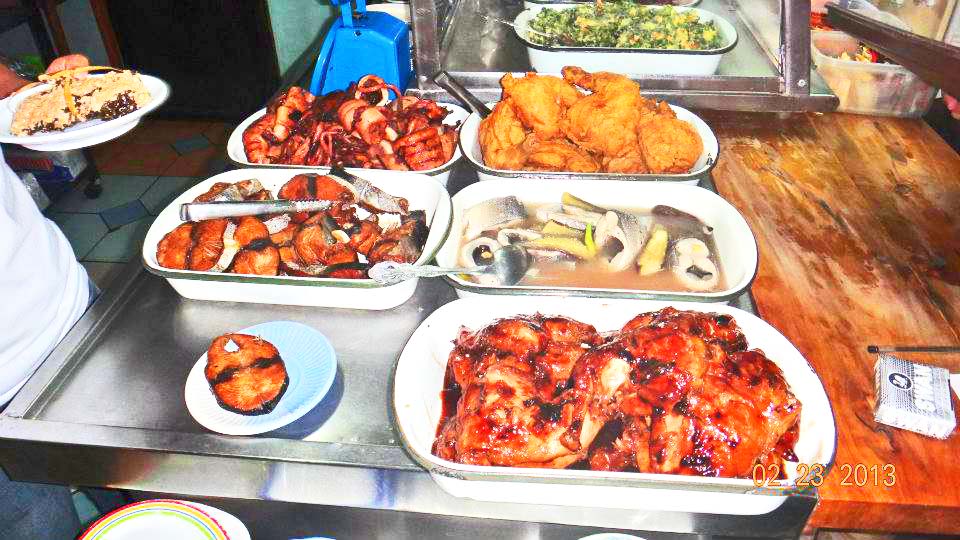 At 6:00 pm, with heads up high and with smiles on their faces, the Jet Riders arrived in Manila after a successful expedition of the Bicol region. It was home sweet home for the brave Jet Riders who conquered the Bicol region to show others their camaraderie and how tough and how good SYM motorcycles are.

Until the next ride. MABUHAY JET RIDERS! MABUHAY SYM!