Around the world, the Kawasaki Ninja 650 has been touted as the best beginner bike at an affordable price. Here in the Philippines, it has changed the local market by expanding the new big bike sales industry and is now the bestselling brand new bike over 400cc in the country. 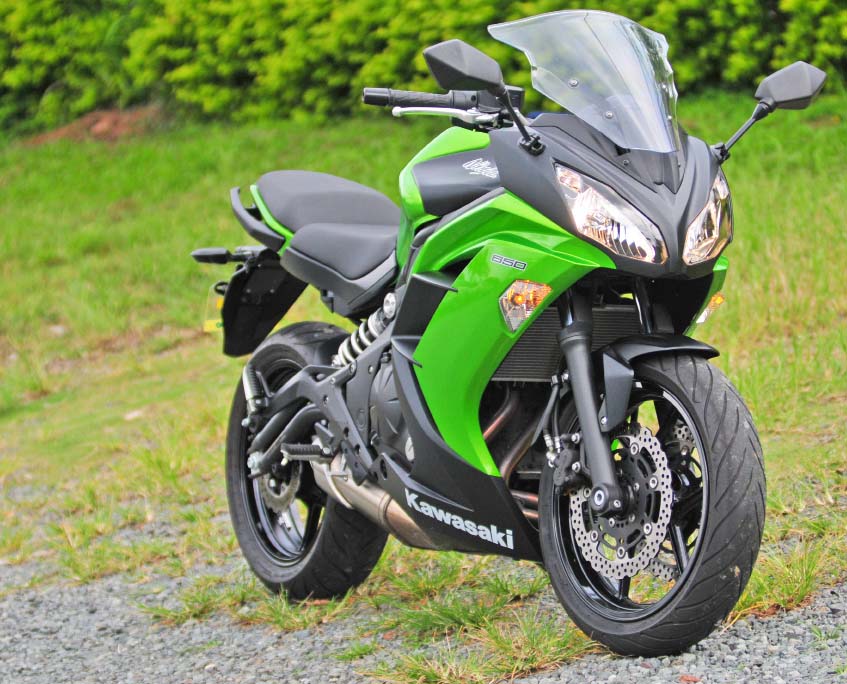 The original Ninja 650R and its naked ER-6n twin were first introduced by Kawasaki way back in 2006 after debuting at the 2005 Tokyo Motorshow. These are middleweight bikes with identical 650cc parallel-twin engines designed for normal use on paved roads. They had modern styling and features, with low-seating ergonomics and a low center of gravity. The engine employed a 180-degree crankshaft, resulting in an uneven firing interval and emitted a sporty exhaust note. It was also one of the first Japanese bikes to adopt the now in vogue under engine muffler which centra-lizes mass. In a time of expensive four multi-cylinder super sports, the Ninja 650 was a breath of fresh air in the market especially for budget conscious new riders. 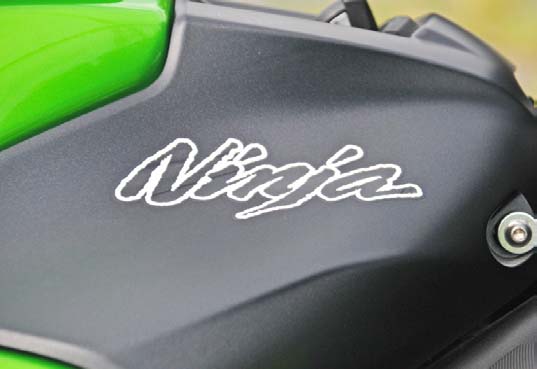 Staring in the early 1980’s, the rapid development in bike technology resulted in a much improved but highly specialized motorcycles. Bikes evolved into narrow focus machines built for a specific purpose like sport bikes, long-distance luxury tourers and dropped cruisers. Older riders will remember that before that era, any street bike can generally be used for just about every type of riding be it touring, commuting, canyon carving and even for mild off-road excursions. Most street bikes were simple, tough, practical, fun, moderately fast and at the same time comfortable enough.  Nowadays bikes are often reflections of the rider’s preferences and personalities, and they are quite specialized for the riding that they do most of the time, whether it’s adventure-touring, sport riding, commuting or cruising. Nowadays, If you need to do it all on one bike, most of the current specialized type of bikes will have compromises for different purposes whether its ergonomics, handling, performance or comfort. The original Ninja 650R at least offered a back to basics street bike (although still learning towards the sporty riding genre) with sensible upright ergonomics, comfortable ride and flexible engine at an affordable price. It can be used for vastly different type of riding (except off-road) in a novice friendly package. 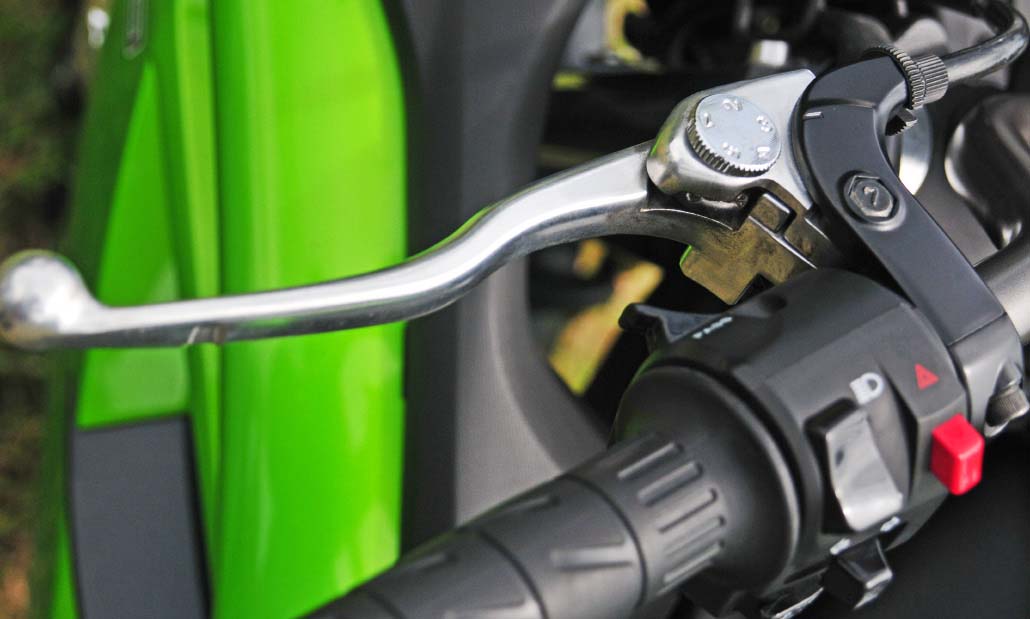 The model was upgraded in 2009 which included new bodywork, mirrors, gauges, lighting, and a new exhaust on the same 649cc engine. Due to the world economic slowdown that started in this period, the Ninja 650 sold well and it spawned similar bikes from rival brands but the Kawasaki was more than able to hold its own. It even added a third brother, the Versys 650 to appeal to the mild off-road riders.

After another 3 years, the Ninja 650 was again updated in 2012 but this time it was completely revamped with a more attractive styling more closely related to the bigger Ninjas in the family. It has a completely new chassis design and an improved engine with the emphasis on low end torque. At the same time the R designation was dropped from its nameplate and focus was on milder riding characteristics with more low-end torque, softer suspension and more comfortable ergonomics and seat. This further broadened the Ninja 650’s appeal especially to the less skilled riders. 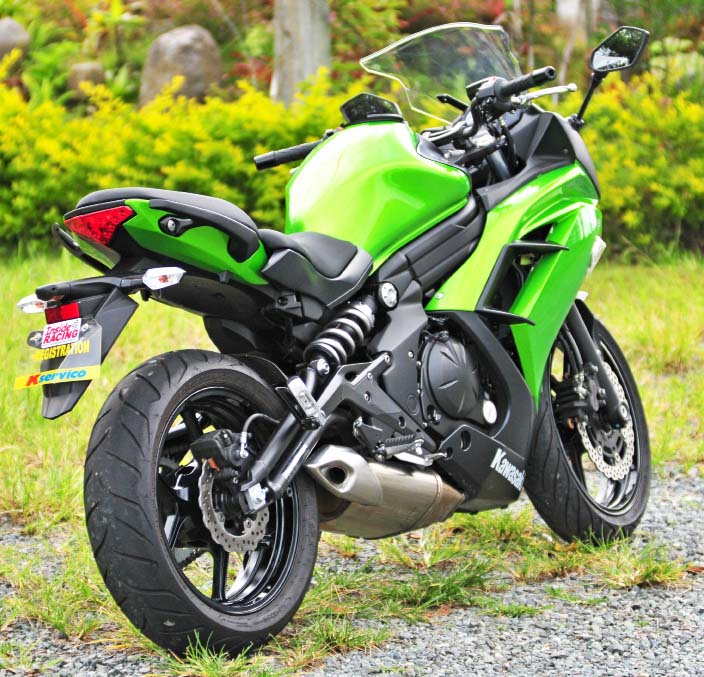 More importantly, the master stroke of Kawasaki is that they built the Ninja 650 at their plant in Thailand since 2010 to be exported all over the world. This meant that the big twin could maintain its competitive price level despite improvements. The middleweight Ninja became a big hit in India, Thailand, Malaysia, and of course, here in the Philippines where it has been the bestselling big bike for two years running. The savings is felt more here as the tax is lowered due to the AFTA ruling that took effect a couple of years ago.

The seat height is low enough for under 5 feet and 6 inch tall Filipino riders to feel confident riding it in traffic as they can easily put their feet down (the narrow seat helps also). The high bars with enough sweep give a light steering even at low speeds while providing a relaxing ergonomics that can easily be sustained for long distance touring rides in the provinces.

The Ninja’s original liquid-cooled, DOHC parallel twin is so sweet because it generates decent power and torque without compromising fuel economy. In 2012, Kawasaki further improved the engine by improving everything related to intake, power and exhaust including the pistons, ignition timing and injector settings, airbox, air filter, header pipes and muffler. The compression was also lowered from 11.3:1 to 10.8:1 to increase power by 5 percent throughout the power band. The result is that the Ninja 650 now produces a maximum power of 71.1 hp at 8500 rpm and max torque of 6.5 KGF.m at 7000. The engine improvements also enhanced the bike’s character as the exhaust note is throatier and freer-sounding. 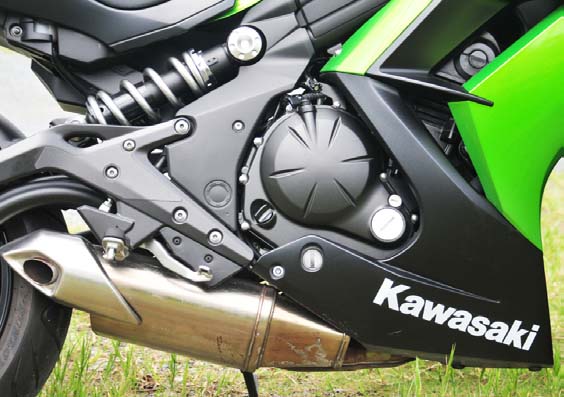 The twin-pipe frame wraps around the engine from the steering head to the swing arm pivot, covered in places by plastics to give the illusion of a twin-spar super sport-style frame. This frame also allows the Ninja 650 to be slimmer especially at the seat, allowing easy reach to the ground.

The adjustable brake and clutch levers are a nice touch and the clutch effort is fantastically light and it is a pleasure to doodle the bike around the city even in heavy traffic making the Ninja 650 a great commuter bike. The engine’s broader power band, with more torque in the low end and midrange, makes riding it easy for any rider and therefore makes it more fun.  Reduced vibration reaches the rider thanks to the rubber mounted engine, pegs and the wide upright handlebar. All in all, the bike is smoother to ride at about above 5,000 rpm.

The new analog tachometer and digital speedometer LCD instrument is very attractive, modern and easy to read. It also gives more useful information like fuel mileage and remaining range, dual trip meters, a fuel gauge and clock.  There’s also a novel “ECO” indicator that blinks when you’re using the gas in a way that conserves fuel. 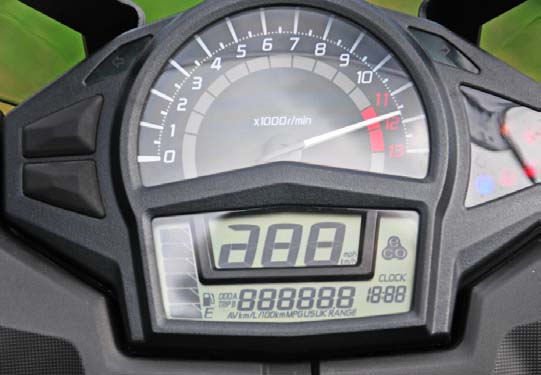 Braking and suspension components do their jobs well. The Ninja 650 is now softer and more comfortable and compliant on most bumpy roads making it a better do-it-all motorcycle. The stylish petal brake rotors have great feel and stopping power. Not overly powerful but just enough to slow down the 183-kilogram bike.

The windshield is three way adjustable (although you need tools to do this) and the mirrors are very functional. It provides better wind protection than the old model and makes the Ninja 650 an acceptable sport tourer. 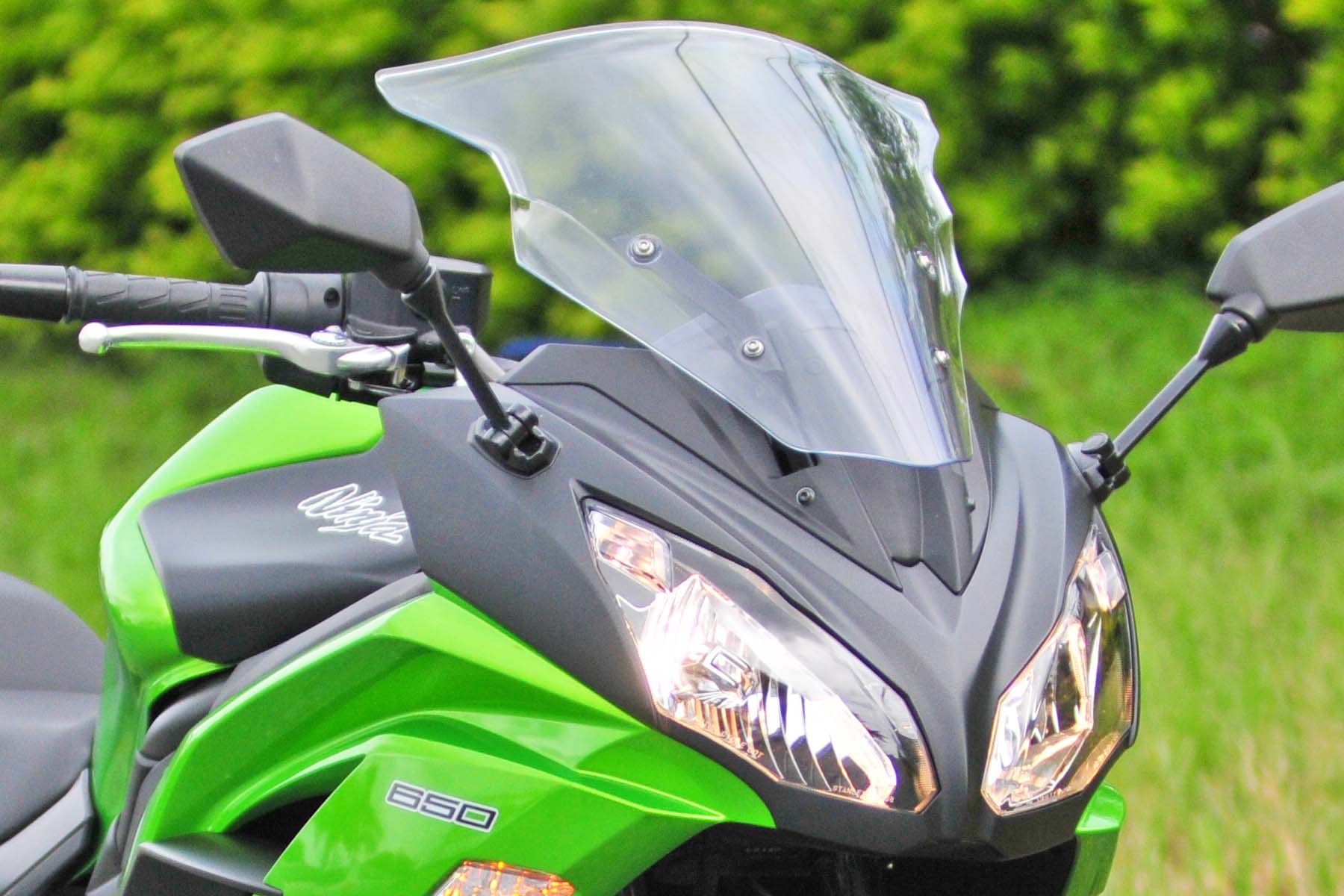 Despite its weight and full-size motorcycle dimensions, the soft suspension, light controls and torquey engine make the Ninja 650 novice rider friendly and a great bike for the less experienced. No wonder a lot of new big bike riders are buying it in the Philippines. 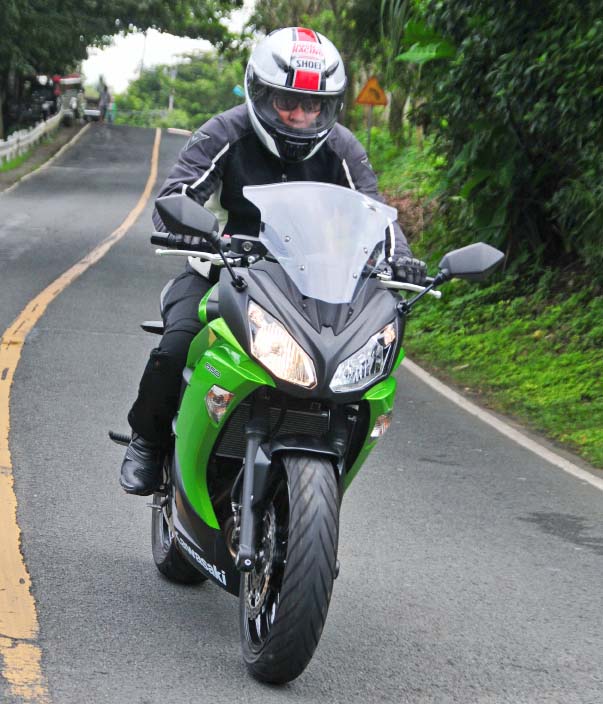 Al Camba “The Ninja 650 is novice-friendly and yet gives expert riders something to look forward to when they mount it. The parallel twin engine has character and has enough torque where it counts, down low, to give the beginner riders confidence when handling the heavy bike in tight and slow traffic situations. The seat height is also not too high for the average Filipino which again gives rider confidence when stopping in traffic since you can easily put your feet down on the ground. Yes, the price is very appealing and no doubt contributed to its success, but I think the bike itself had a bigger effect to its massive appeal to the many new riders who took the plunge for their first new big bike. It’s a very pleasant and easy bike to ride around traffic or in a long expressway cruise. I even know many who use the Ninja 650 on the racetrack! Truly an amazing bike at an amazing price!” 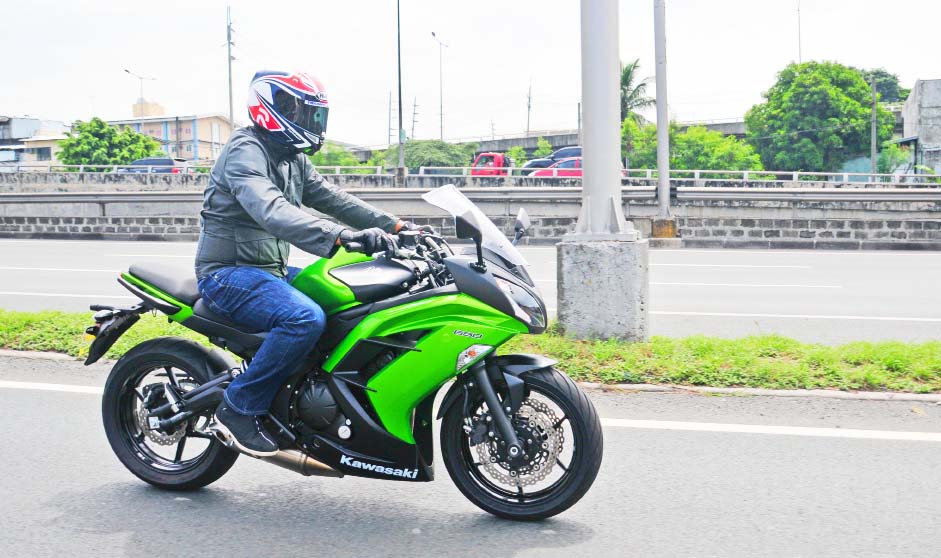 Philip Bonza “It’s a total face lift of the Ninja 650 compared to the older model. The color is cool and the design is better. It has more aggressive lines for a sportier look. The upright handling position makes its relaxing to ride. Its handling is light and easy, very user friendly and can accommodate all levels of riders. It is well suited for every day commuting. Even if it looks big and heavy, this 650 will move like a real Ninja in crisscrossing the traffic in the metro. For a weekend long distance ride, this bike has enough power – maybe not enough for an aggressive rider, but still it performs well. The brakes bite good and the tire grips a lot better. The suspension is gentle and the ergonomics fit perfectly to most Pinoy riders. The color and design make people take a second look. The style is appealing. The rear shock is exposed and the exhaust is held under the engine. The instrument panel has more information for the rider. Considering the new design, the good price and performance, plus the availability of many accessories and aftermarket parts in the local market today, I give it 4.5 stars.” 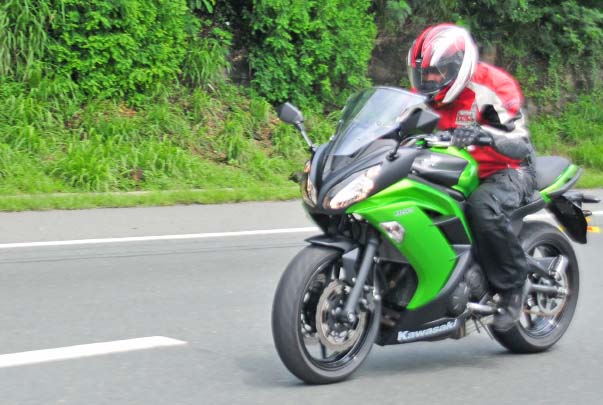 Ricci Abrina “This is a middleweight big bike that’s as tame and stealthy as a big bore Ninja should be. It’s silent, quick, agile and smooth at any gear. Even if you are a gear lower or higher than optimal, it’s as smooth as a hot samurai sword cutting through butter. I like the adjustable wind deflector which protects your head even though the stance on the bike is a bit upright. The brakes are robust but the handling is in the heavy side. Suspension is typically soft and the tires that came with the test unit is sticky. The cluster of gauges looks modern and easy to read while the lighting system is bright and balanced for 120kph. With the well-known Ninja brand, I would think more color variants should be introduced to boost its appeal.”

*This article was published in InsideRACING’s  Volume 11 Number 9  2013 issue. 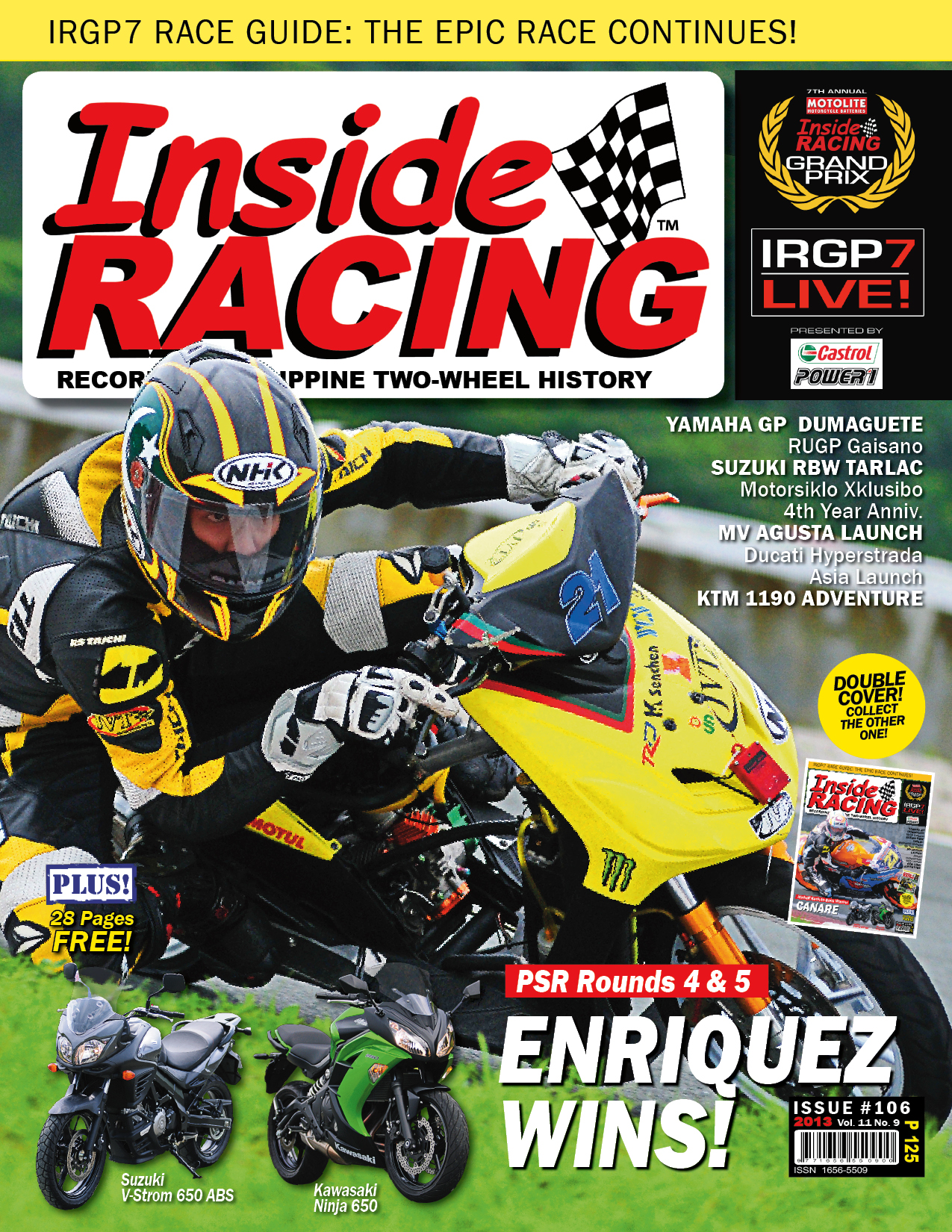