Here is another bike you can buy locally that not only surprises you, but impresses you as well with its performance, usability and refinement. Not to mention how much more motorcycle it rewards the buyer for its asking price. 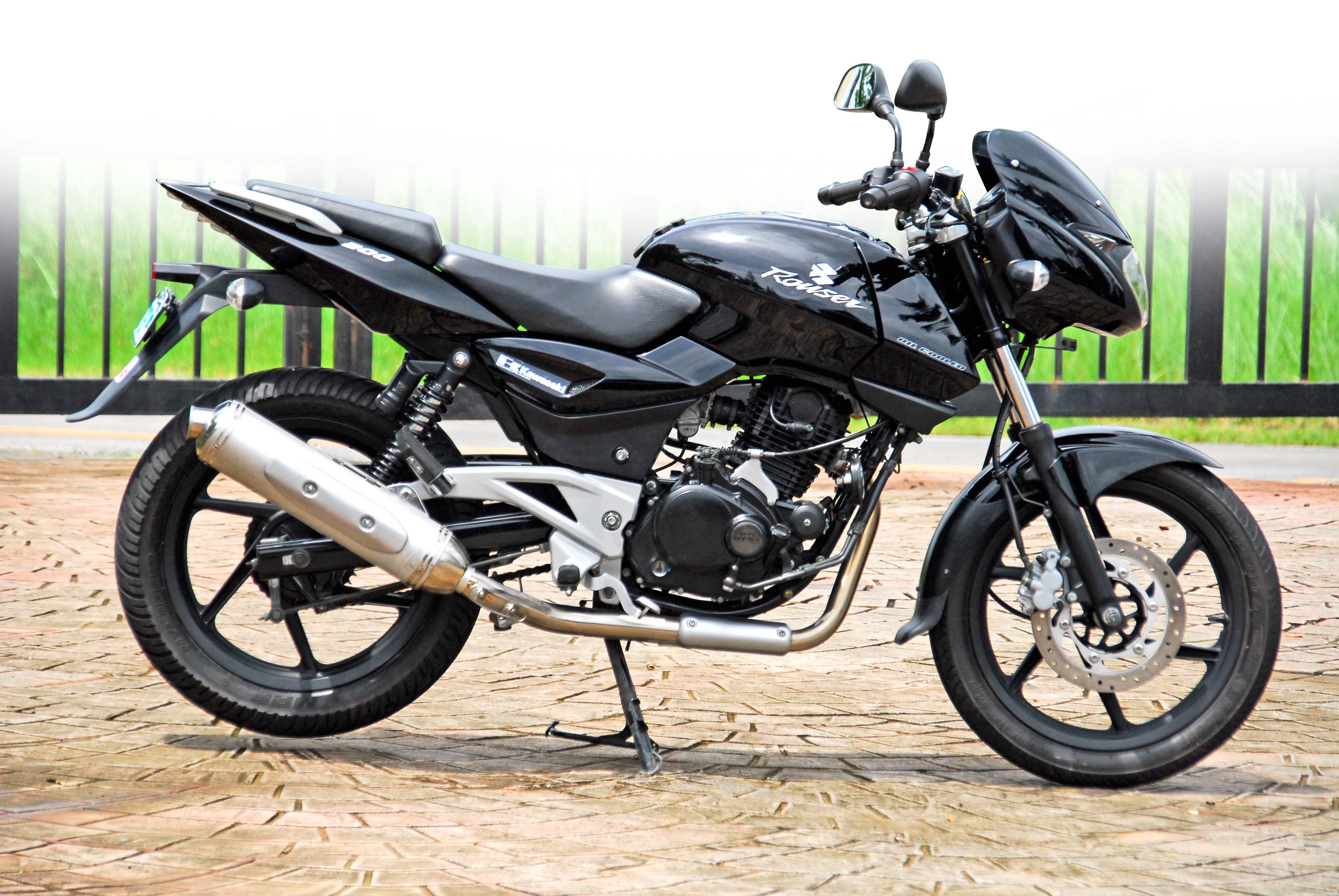 The partnership of Kawasaki Motors Philippines Corporation (KMPC) and Bajaj Auto of India that started a few years ago has made KMPC a formidable force in the local two-wheel industry. Coined “The Great Asian Connection”, the partnership brought the Wind 125 and the important CT100 business models that helped KMPC reach its no. 2 position in the market.

The Bajaj group of companies is among the top 10 businesses in India and its principal company, Bajaj Auto is the fourth largest two- and three-wheeler manufacturer in the world while Kawasaki is known for its ultra powerful and reliable engines and uniquely stylish designs. The partnership further produced two more models including the Rouser 200 introduced last April. The other one is the recently released Discovery 135 motorcycle which we hope to test also in the near future.

The Bajaj Pulsar motorcycle on which the new Rouser 200 is based was actually launched more than five years ago and has received many improvements and the Rouser 200 is its best evolution yet. It is the most aggressive, best-looking, best-performing and the fastest version ever, making it very a very popular model in India. It is intended for performance riders who want more speed and style than the ordinary underbone or scooter. 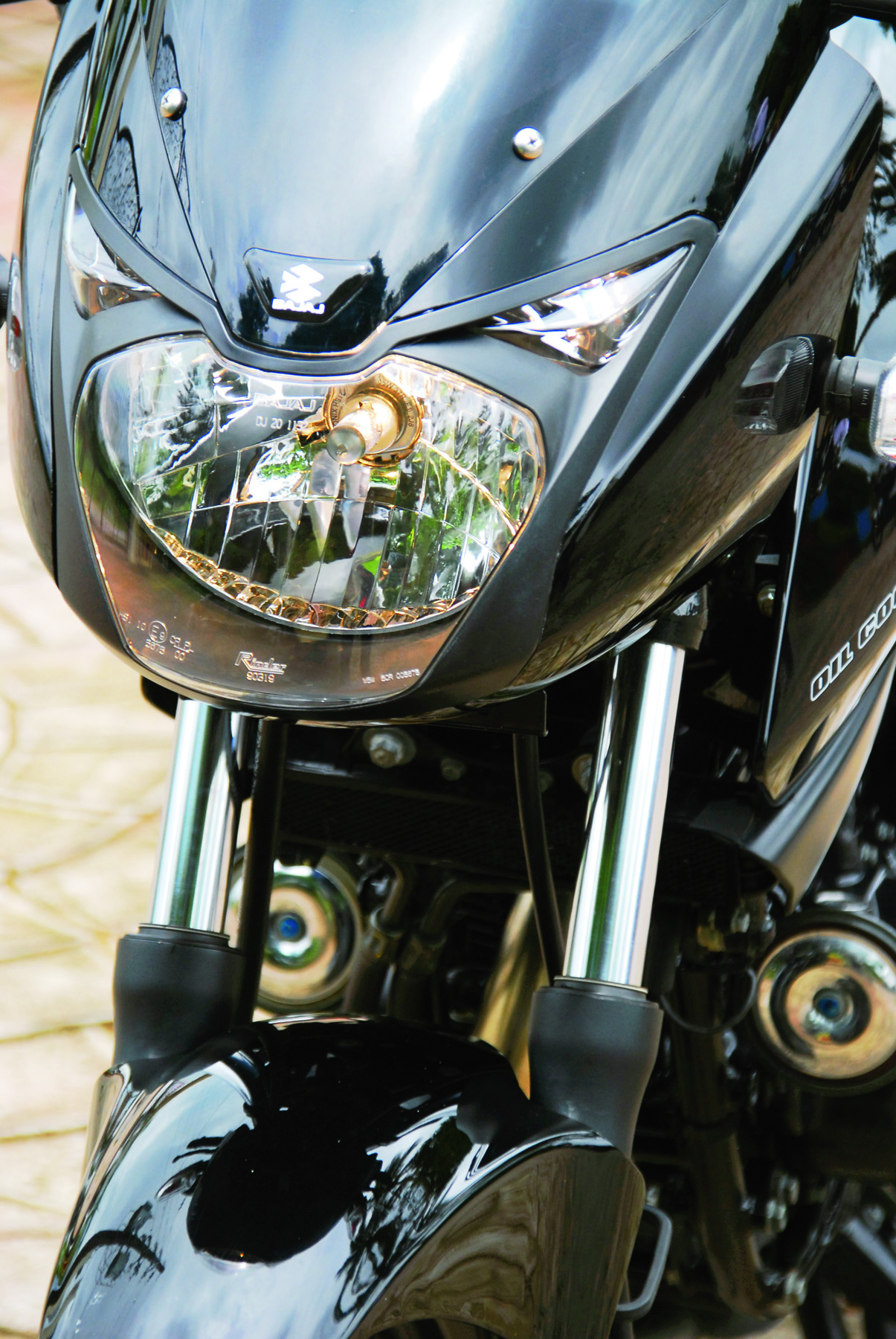 The Rouser 200 comes with many power packed big bike features like the wide 17-inch alloy wheels (this allows the fitting of many premium big bike tires that are available in the aftermarket), digital speedometer, engine oil cooler, five-speed gearbox with one down and four up pattern, self-canceling turn signal, parking lights and illuminated controls. 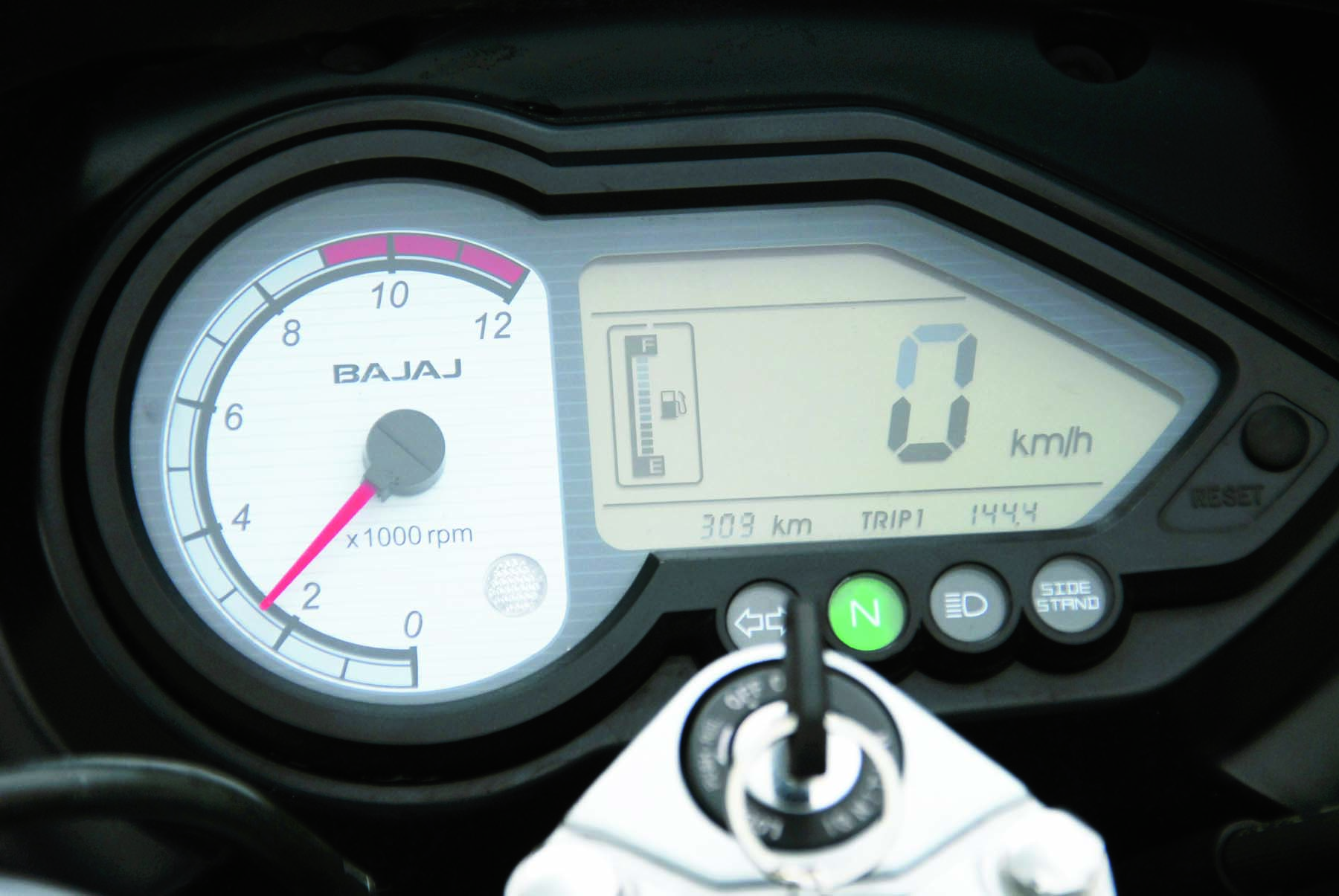 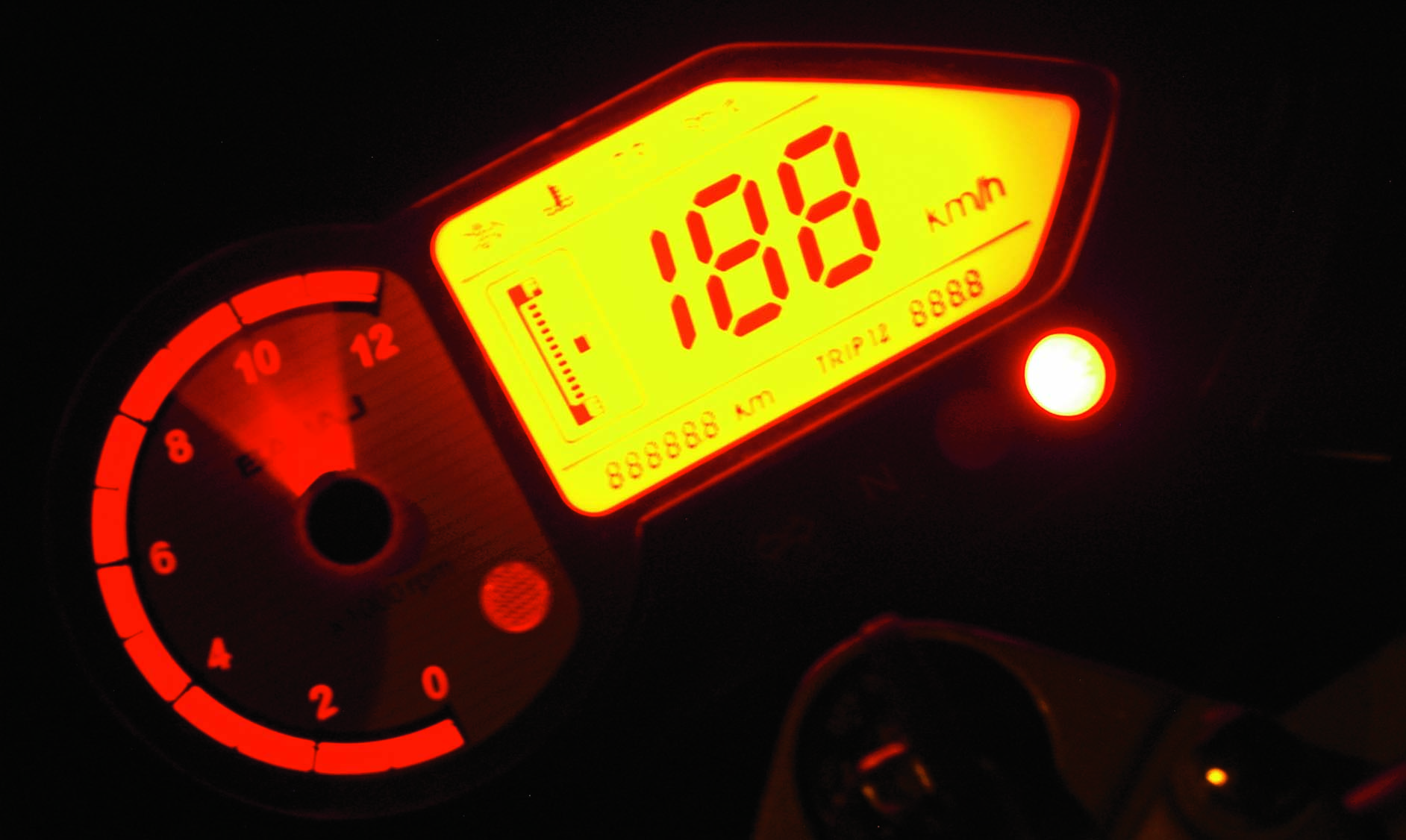 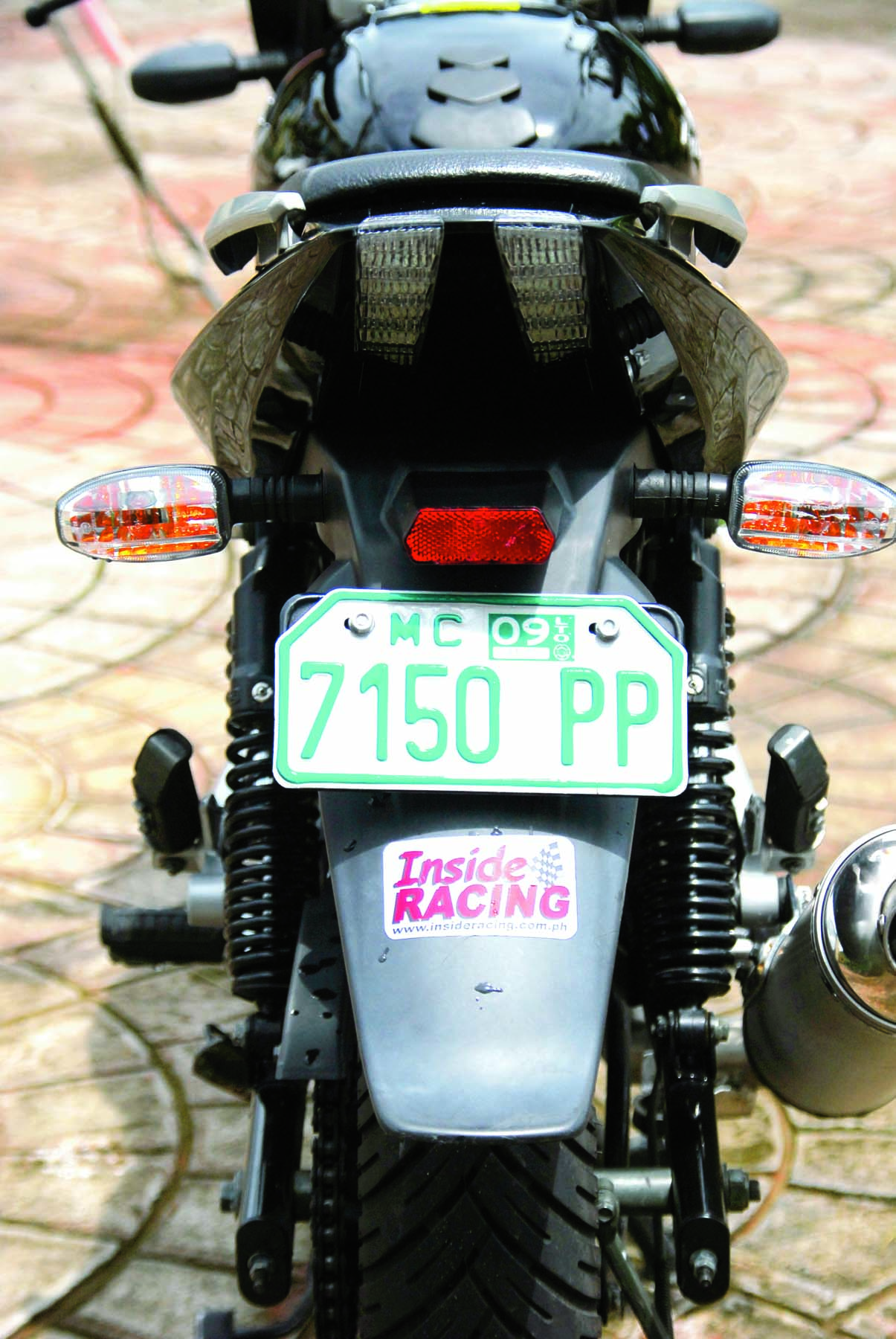 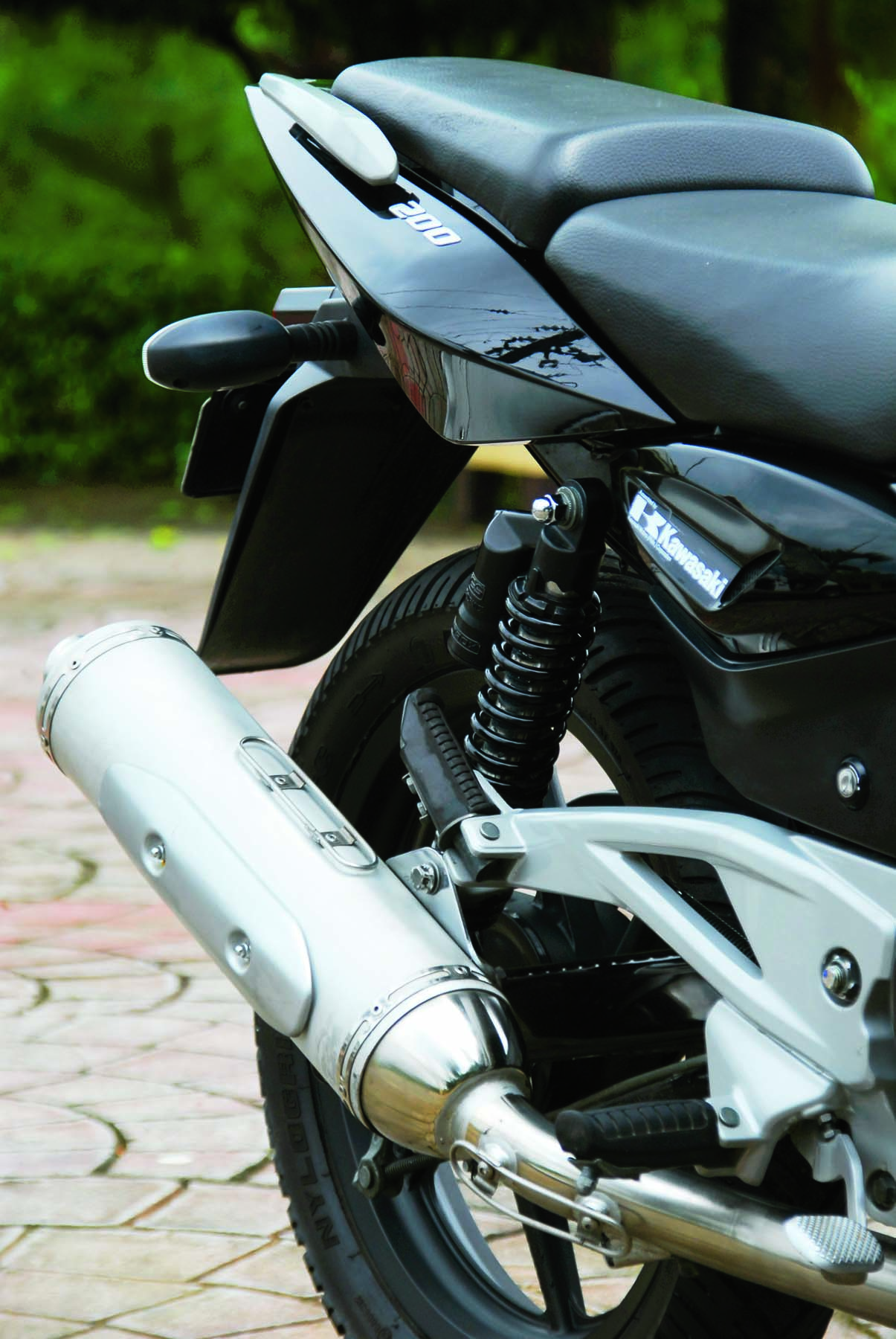 It is powered by an advanced 4-stroke, SOHC, 2-valve, 198.8cc single-cylinder engine capable of producing a maximum power of 18PS at 8000 RPM. The DTS-I (Digital Twin Spark) ignition engine has two spark plugs located at opposite ends of the combustion chamber for fast and efficient combustion. The benefits of this efficient combustion process can be felt in terms of better fuel efficiency, lower emissions, and better performance. Its oil-cooled feature also makes it more smooth and relaxed. It is one of the most refined engines from Bajaj. 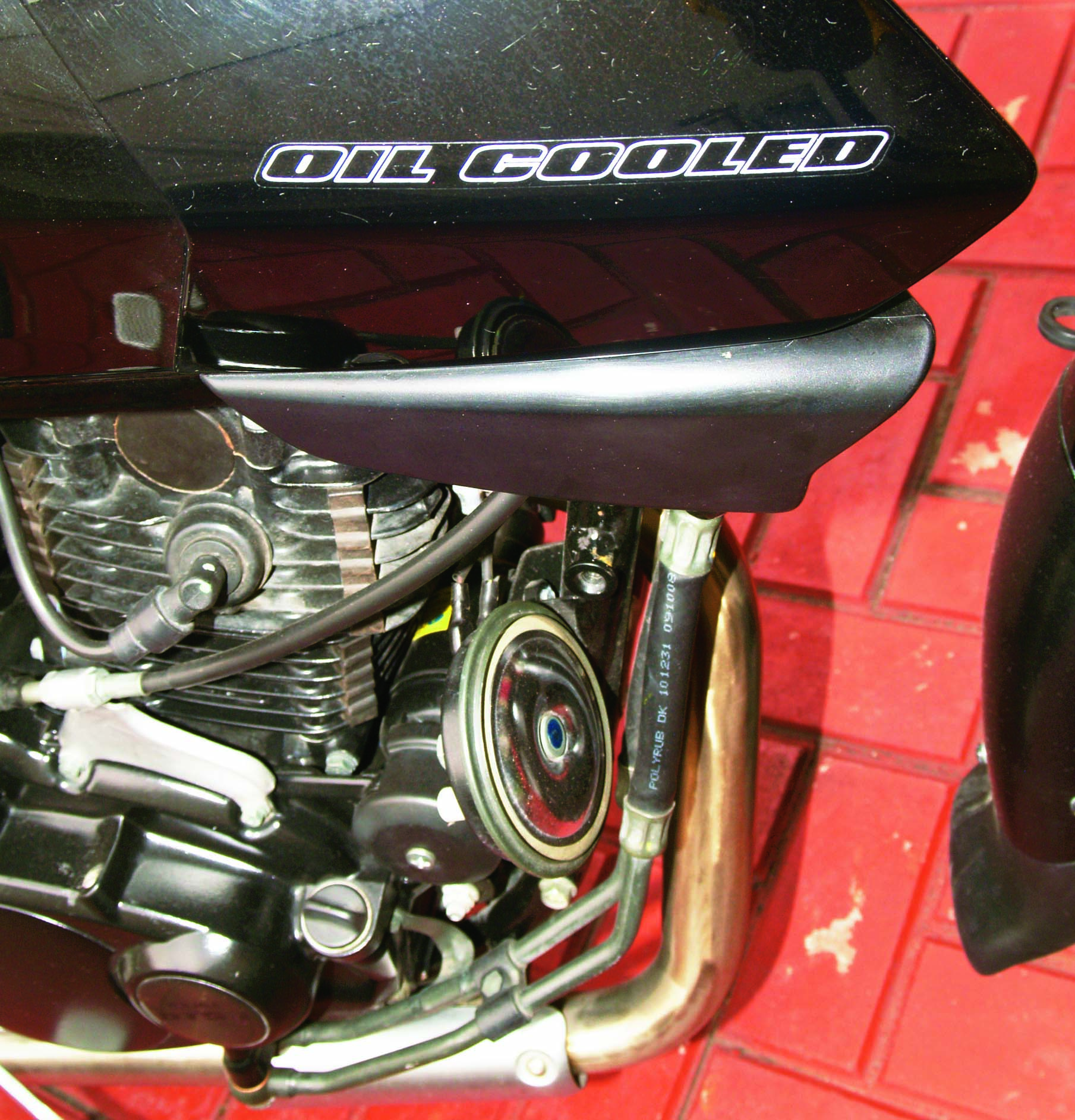 It starts easily with the push of a button. Like in bigger displacement motorcycles there is no kick starter. It has an ample fuel tank of 15 liters making it capable of very long distance rides considering how frugal the 200cc engine is. The rigid double cradle down tube frame is supported by a beefy front telescopic fork with 135mm travel and superb rear suspension composed of triple rate spring and 5-way adjustable, gas charged NitroX shock absorbers. The brakes are 260mm disk at the front and drum for the rear. 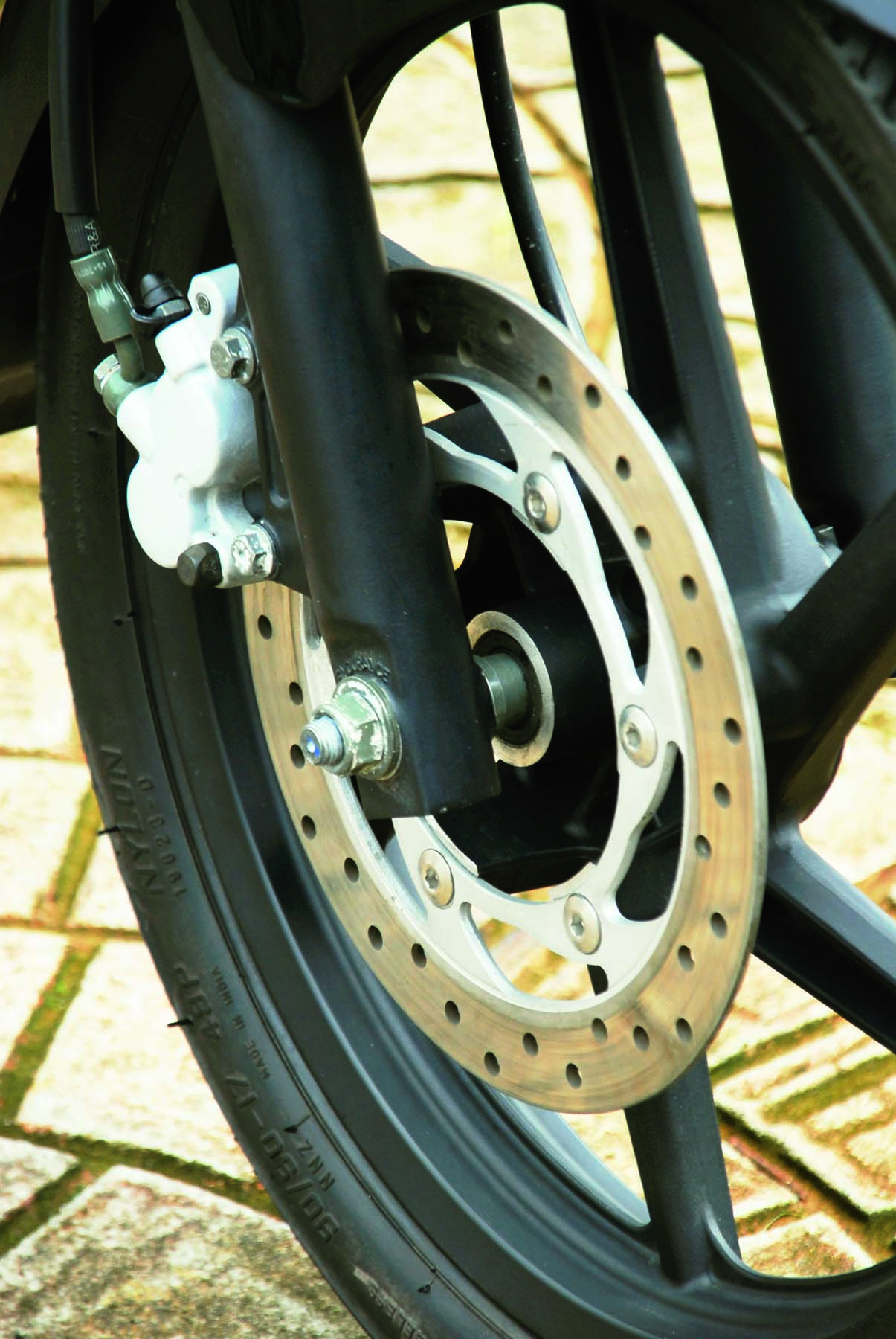 Being lighter than other 200cc sport bikes by at least 5 kilos, the handling is very impressive, light, and sporty, ideal for playful or aggressive riding yet it can also be relaxed and stable for easy jaunts or long touring rides. Roll-on acceleration through the gears is a sweet experience as the engine not only sounds well but pulls strong too, making it easy to keep up with the commuter traffic or leave them behind. The silky smooth engine also allows you to ride the Rouser in top gear at low RPM for effortless riding in the highway.

The only handling quirk we found was the big turning radius that makes maneuvering the Rouser in the parking lots or tight traffic situations very challenging. The riding position is perfect for everyday riding. The handlebar, seat and foot peg positions are spot-on, a classic standard riding position that does not tax your wrists and back. The ergonomics is so instinctive that you will be able to ride for hours before any part of your body will complain. Riding it was so enjoyable that we ended up riding longer and farther than our usual test rides. The Rouser 200 is probably one of the best all around motorcycles to ride that we have tested so far. 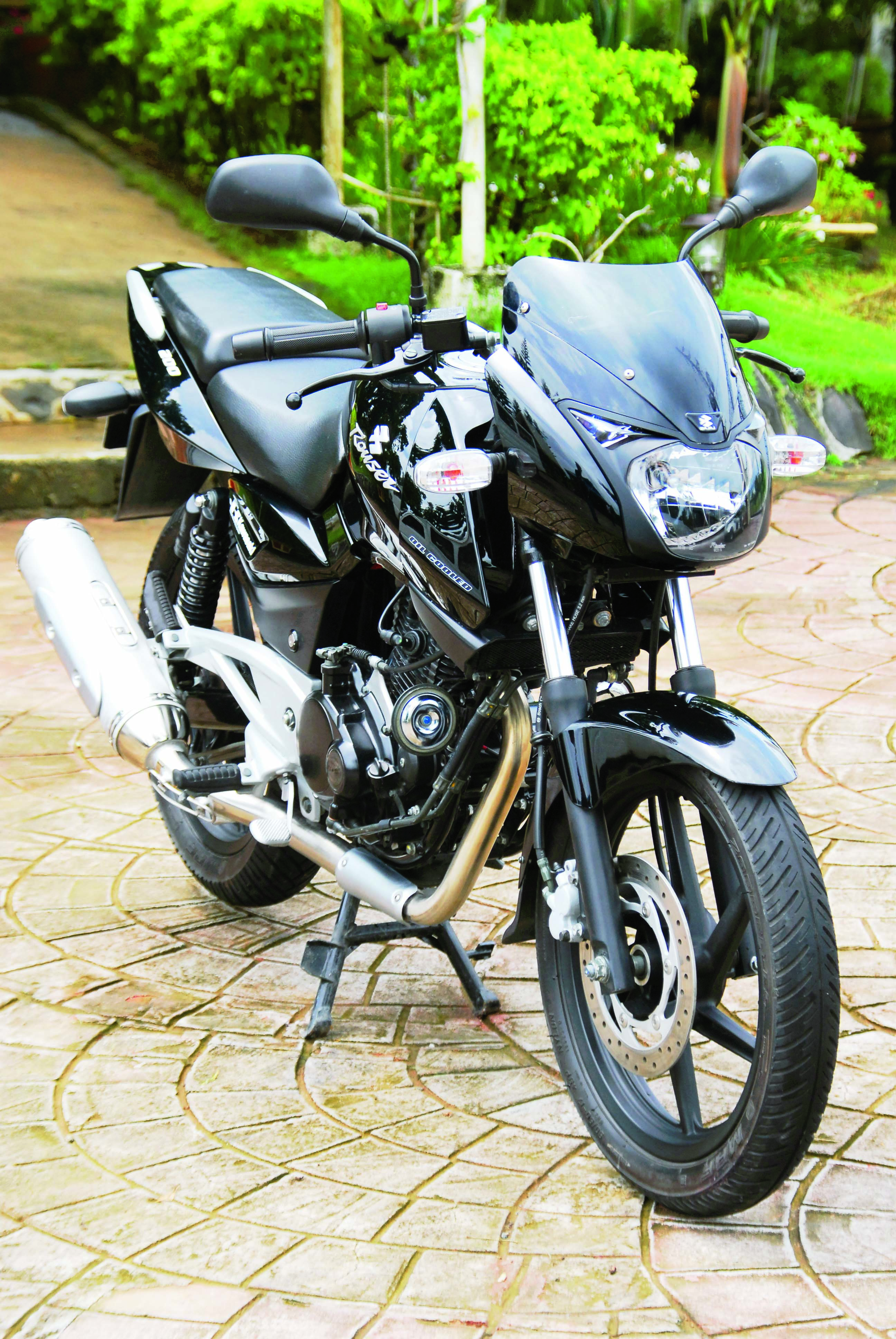 The Rouser 200 comes with many power-packed big bike features.

Since its launch almost six months ago, the Rouser 200’s balanced combination of looks, performance and handling have generated almost a cult following among the community with many if not all of its new owners proud and excited about their ride. The market for bigger motorcycles for the maturing and upgrading small motorcycle riders is definitely growing. For underbone or scooter riders, the jump in performance, capability and refinement is amazing and you will feel that you have moved into a much better motorcycle. Big bikers will find a pleasant surprise for the agility and pace of this sub-P100k mount that can serve as a reliable and easy to use commuter. For the price of only P94, 900 it’s really a bargain considering how much motorcycle you are getting for it. The Rouser not only looks good but it goes and handles like a dream as well, and for many riders that is just about perfect. 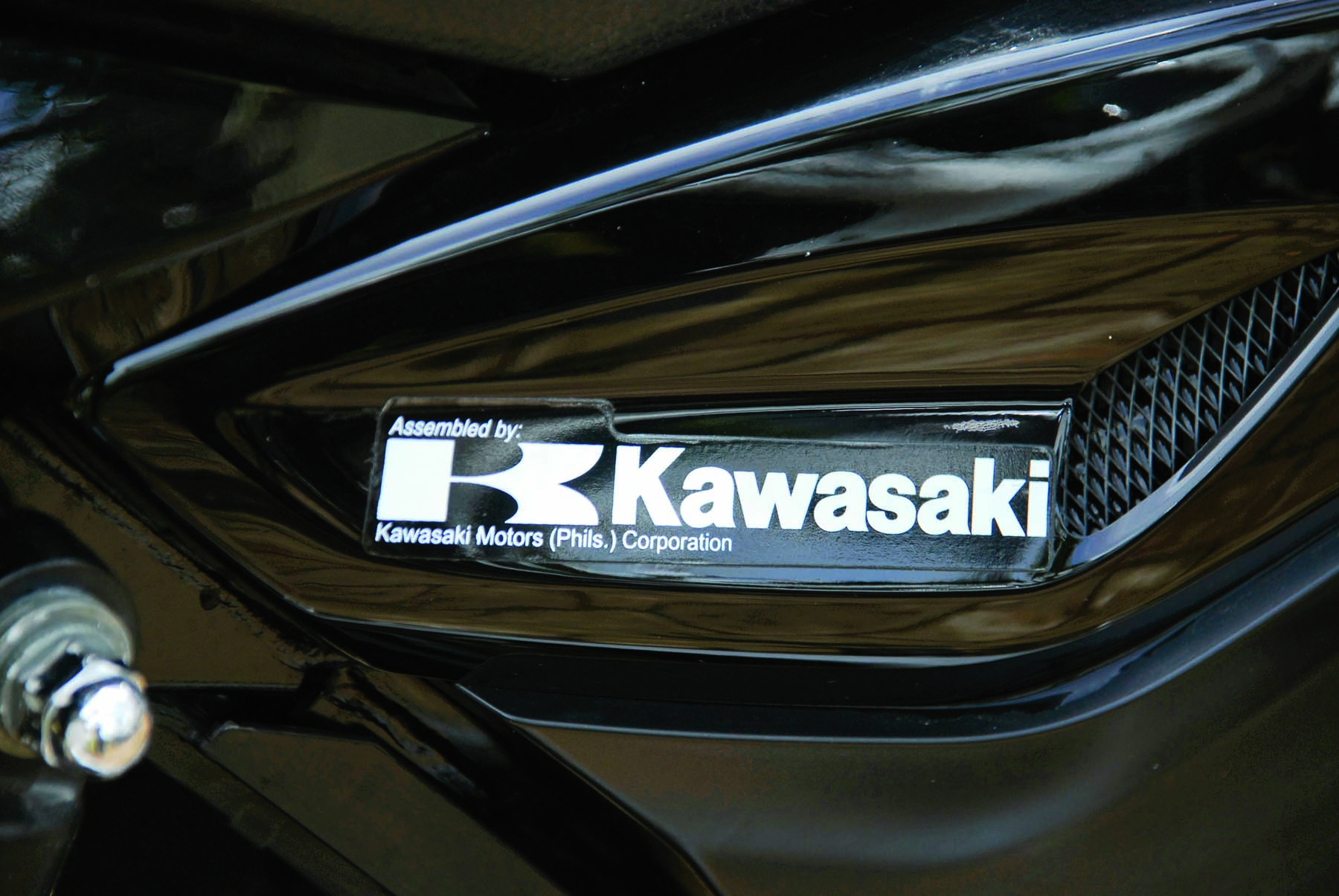 Handling is very impressive, light, and sporty yet it can also be relaxed and stable. 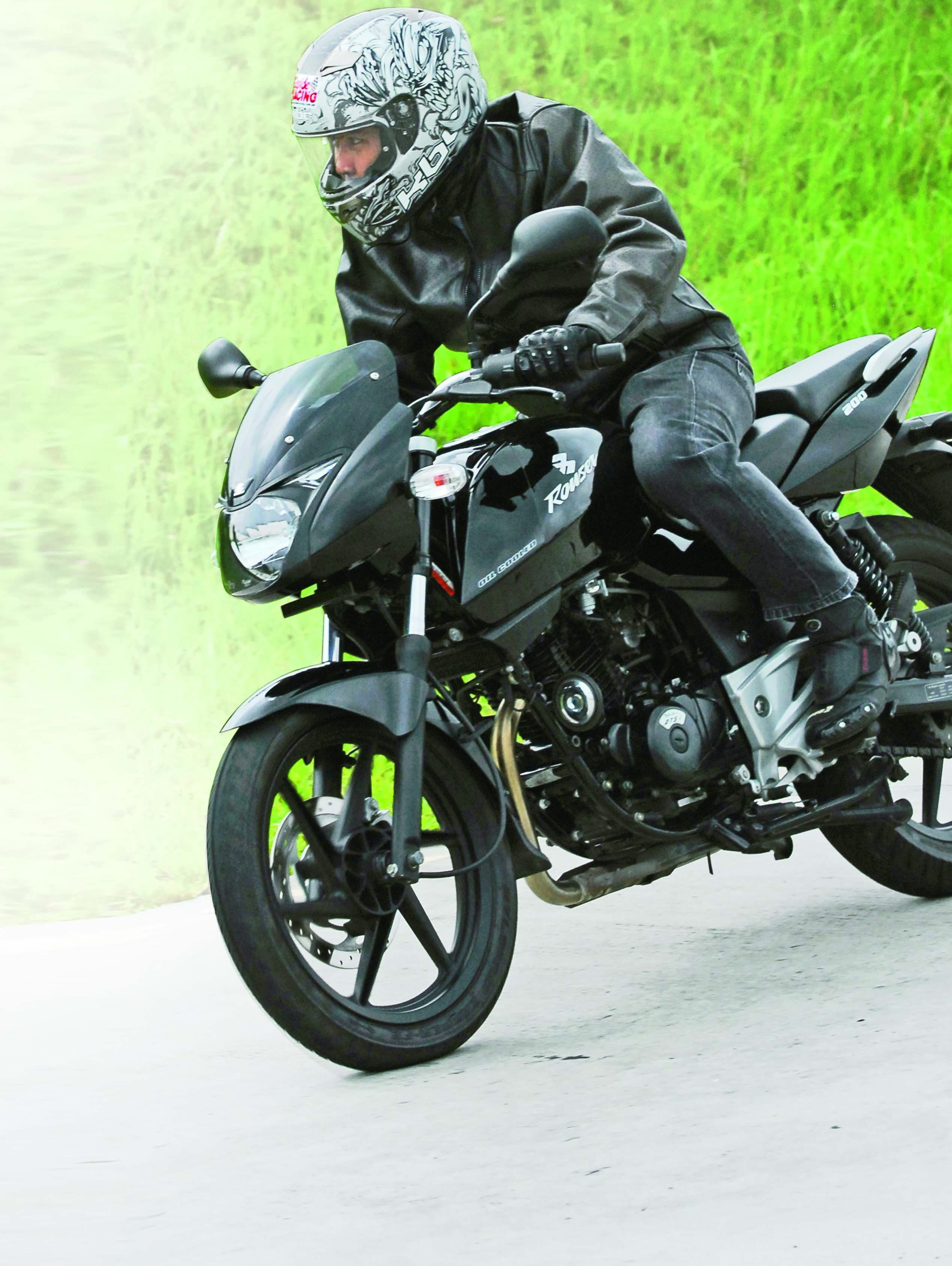 Al Camba: “My first impression is that the Rouser is bigger than the picture suggests. I think it’s because the headlight assembly is relatively big and wide compared to other bikes which make it look smaller, however the headlamp looks nice and reminds me of the original Aprillia Touno naked bike. The tail lamp looks like a double raw LED (actually it’s an ordinary lamp!) that makes it look like a European sport bike. You can even unbolt the bottom part of the multi-piece front fender to make it more aggressive. The rear fender and the signal lamps assembly actually can be unbolted easily together for easy track day prep. Despite the size of the fuel tank garnish or side covers, they make the bike look nicer. I like the overall riding ergonomics, the seat position and reach to the handlebars are just perfect. Even though it’s a heavy bike, it feels very light once you get moving, almost as light as an underbone. The Rouser has an impressive fork and powerful single cylinder 200cc air-cooled engine. The engine is also smooth, refined and comes with a very nice exhaust note (sporty loud but not ‘tunog lata’). You will find it a pleasant experience to hear the engine rev-up as you shift from gear to gear as you accelerate. You can easily keep up with the bigger bikes with the Rouser 200. The handling is responsive and sporty yet very stable and relaxed. The front fork and the double rear shock perform very well and the suspension is very nice as it absorbs all the bumps so it’s able to cope with aggressive riding. The front brakes are good and easily modulated; it feels like it has steel brake lines. The vibration damping is very good especially on the handle bars. Even after more than an hour of riding I wasn’t tired, the 200cc engine’s vibration was minimal. It’s so relaxing that you would actually be increasing your average speed because of how composed the engine is compared to an underbone. We have not tested its top speed but I’m sure it can reach the claimed speed of 130 kph easily. I’m really impressed with the Rouser’s instrument cluster. Like in a modern superbike, it has an analog tachometer with shift light and a digital speedometer. The sight of the panel at night is fantastic and even the handlebar controls are illuminated. It has trip meters and fuel gauge but I would appreciate it more if it had an engine temperature gauge and gear indicator. The side stand operation is very light, the self-canceling turn signal is impressive as well. The horn sounds like a proper big bike unit and not from an underbone. I don’t like the number plate mount that comes standard and we feel the bike is prettier without it, hence we removed it. I would also prefer to have a kick starter and premium sport tires as standard equipment, but other than that, the bike is almost perfect!” 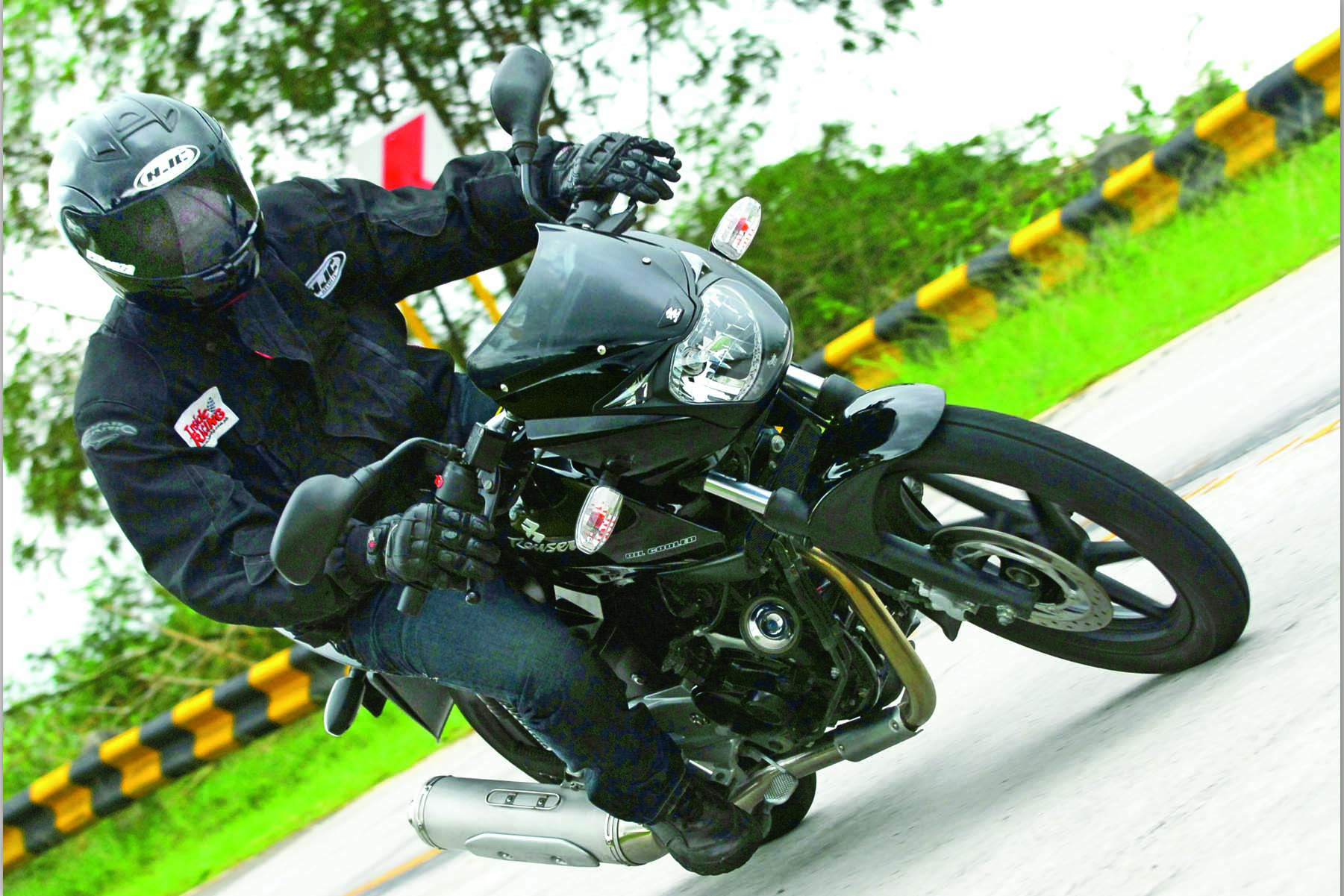 Philip Bonza: “I like the black color and the sporty elegant look. I feel like I’m a ‘kontrabida’ just like in the movies. The handling is very light with superb power and perfect tires for the 200, however, with better looking tires I think it will be more macho and sporty. While it’s good-looking overall, I don’t like the shape of the headlight. There is great power in the low gears up to the fifth gear and can easily reach 100 kph. The front brake is very very powerful! But the rear brake is not that impressive as the front. For my style of riding, the handle bars are a bit uncomfortable but I can easily adapt to the handling of this bike. The rear and the front suspension are soft and very comfortable even during abnormal heavy riding. It’s great for aggressive cornering on weekend rides. Besides the engine power and handling, I find the instrument panel also impressive. It has big digital speedometer with the background of orange with the large marking that makes it very easy to read. I also fancy the auto-off turn signal lights that work very well. The steering radius is a bit wide. It’s hard to make a u-turn compared to an underbone, but then again, this is a 200cc sport bike so it’s normal. Overall, I can rate this bike a 5 out of 5 stars, very impressive!” 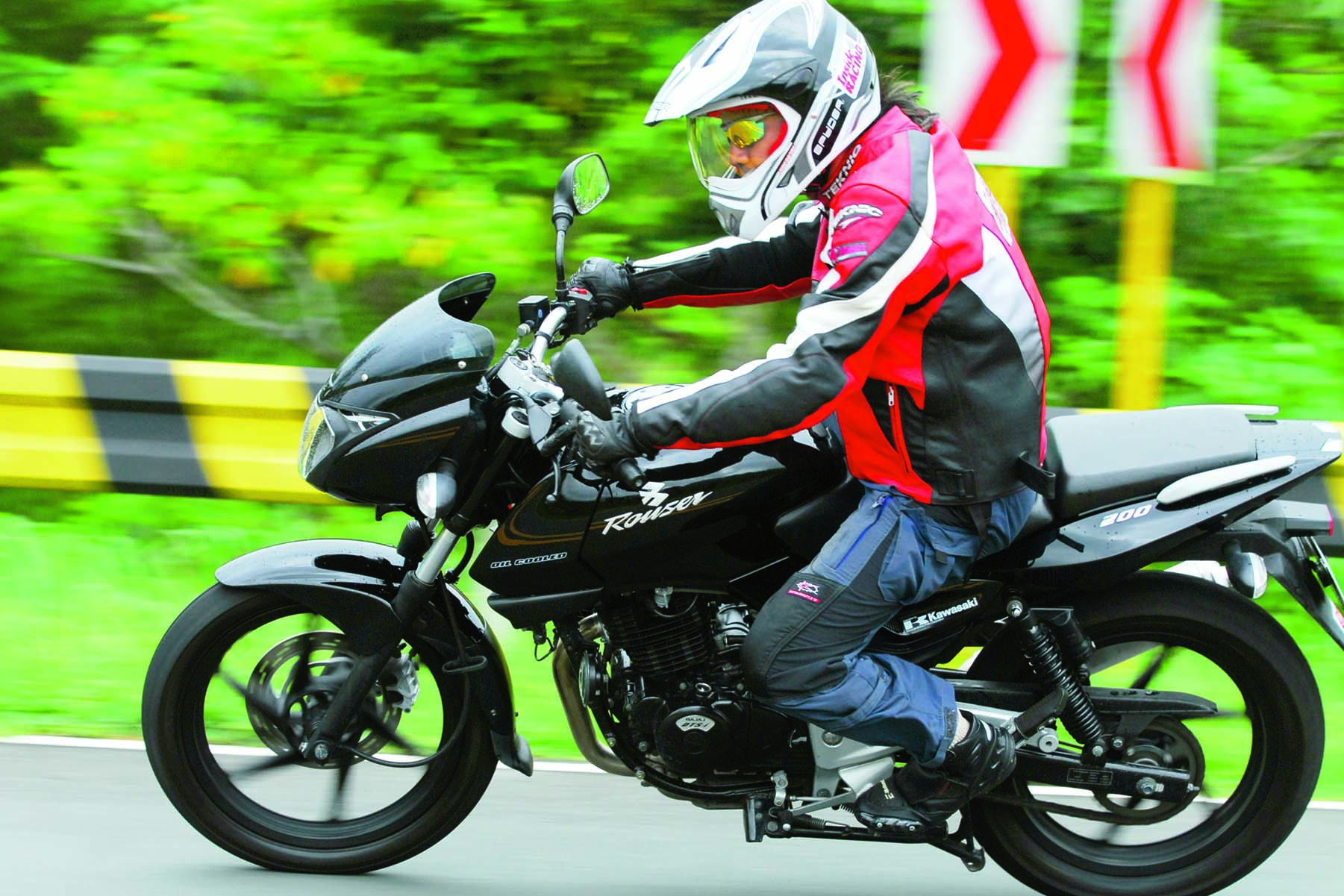 Ricci Abrina:
“What can I say? Kawasaki has done a great job on making a “small” big bike. It looks good and sharp. It works fine, the suspension works well both front and rear and I have no complaint. The power of the engine is much better than some of the Chinese models. Accelerating from 0 to 90kph is a breeze. The Rouser can hold it on around twisty roads as well. The power of the 200cc engine is ample, it can really take off! What I have noticed are the tires, which I think are just not suitable for power. They look slippery to me and if it costs only a little, you should change the tires to ones with a lower profile. I think it will become more aggressive and will look sharper. From the rear, it looks very sporty similar to an R6, and also very compact like an R6. I like what they did with the instrument gauges and the modern naked bike look. The front headlight assembly is very European, like an Aprilia. And I think it would also look better if it had a different color aside from black which already looks very ‘macho’. I think different colors like red or metallic mixtures will improve its appearance even more. I like the exhaust system, I think the pipe is good that’s why it has good power. But it is also silent enough. The front brake is precise and very strong, the rear is a bit softer and less powerful like in an underbone.”

*This article was published in InsideRACING’s  Volume 7 Number 9  2009 issue. 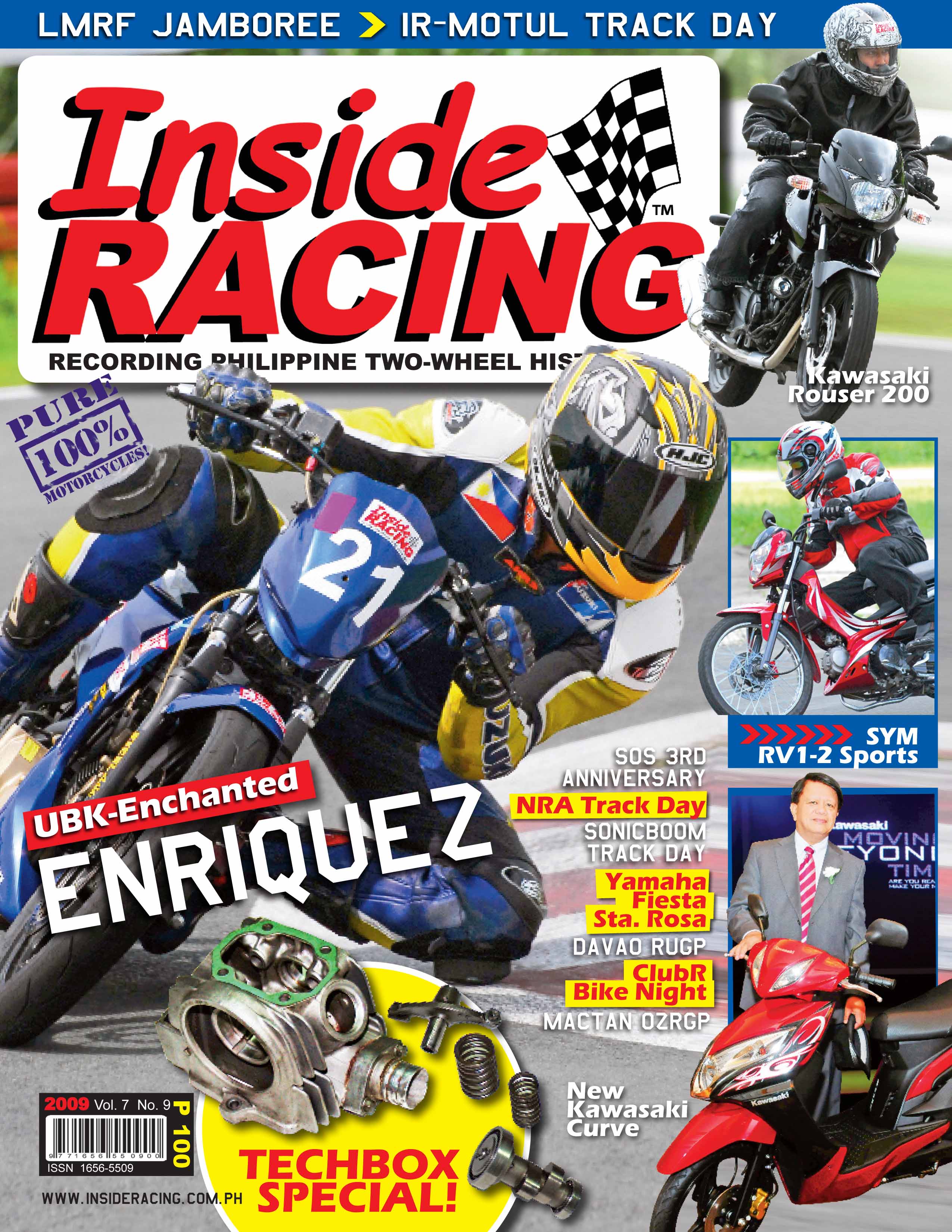