2014 Kawasaki ZX 10R Track Ride Review: The Legend at its Best Ever!

The 30th Anniversary Ninja ZX-10R is the best ever Ninja motorcycle on the planet, but surprisingly, one  the easiest to ride fast.

From the eighties till the early 2000, the superbike market has always been dominated by the Japanese giants with the exception of Ducati, whose world superbike track success was translated into sales. 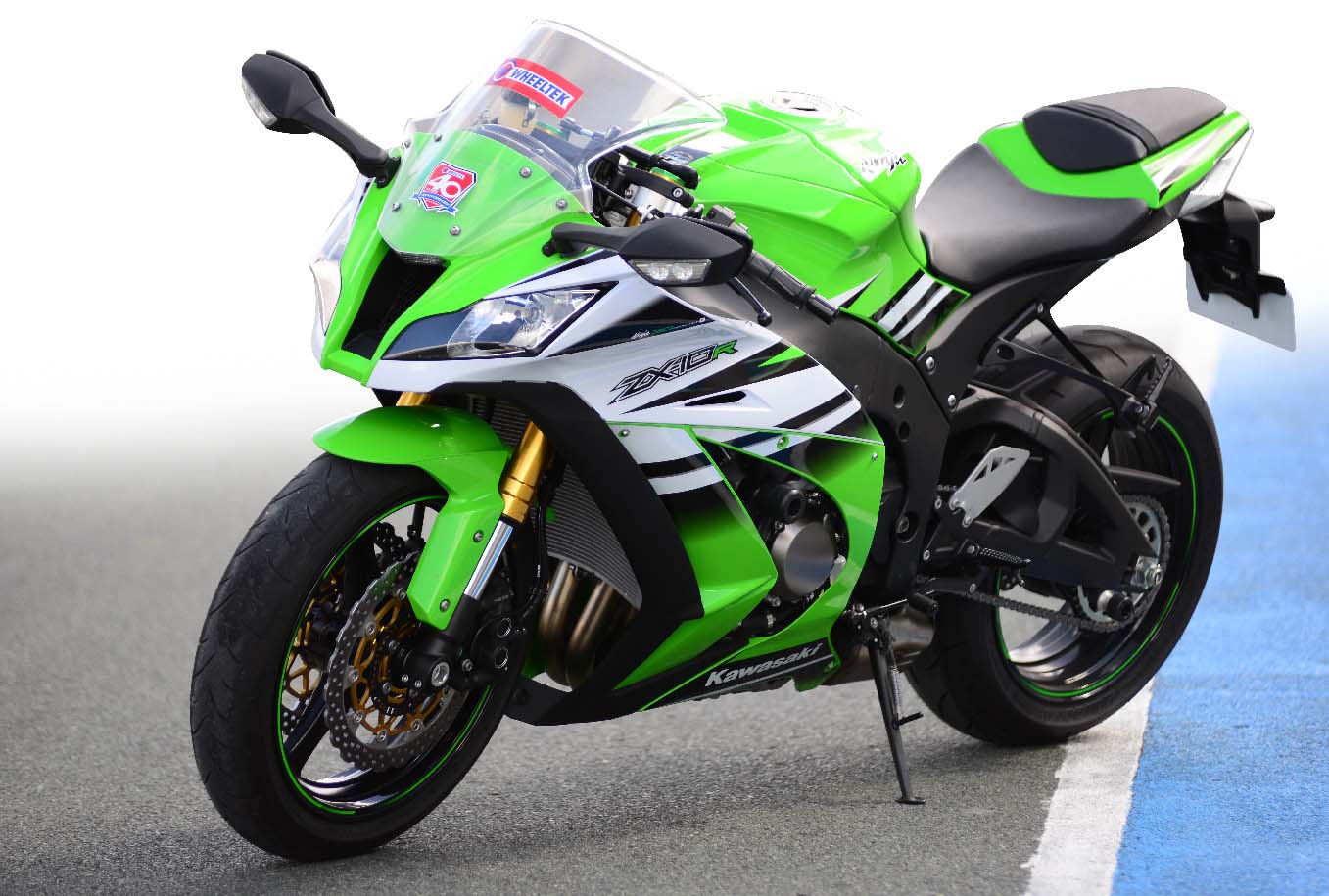 It all started in 1984 when Kawasaki introduced the mighty Ninja 900 that Tom Cruise rode in Top Gun.  Since then, Suzuki’s GSX-R models, Yamaha’s R1 and R6, Honda’s VFR, VTR and CBR and of course, Kawasaki’s Ninja lineup,  have all dominated the racetrack and showroom floors worldwide for nearly two decades both in the open and middleweight segments.

That all changed sometime in 2008 when the global economic recession hit the global big bike market hard. The super sport market imploded and the biggest losers were the more affordable mainstream Japanese brands.  It was also an opportune time for the Europeans to take hold of this segment as buyers of premium brands were generally less affected. It did not hurt that BMW introduced the ground breaking S 1000 RR, Aprilia its highly effective RSV4 and MV Agusta even renewed and upgraded the F4. Meanwhile, the Japanese, more or less, decided to hold their guns and regurgitate existing models with minor changes in colors or specs to wait out the sales slump. 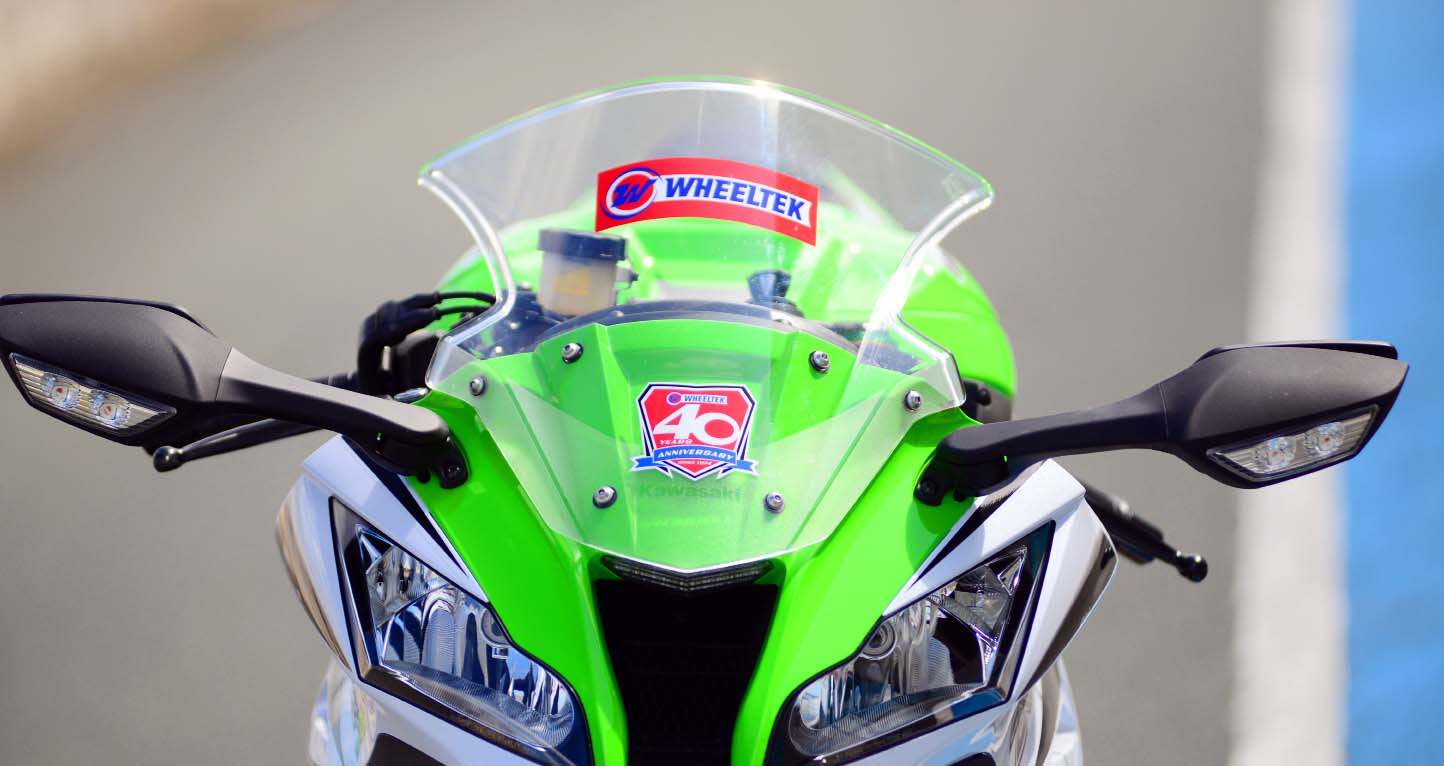 However there was an exception, the Kawasaki Ninja ZX-10R. After pulling the plug on its MotoGP program, the company wisely decided to focus its scare resource on production bikes and was rewarded both in sales and in racing as it managed to win the Superbike World Championship in 2013 with rider Tom Sykes, the year of the Ninja’s 30th anniversary. The ZX-10R with its advance electronics and track focused design was the only Japanese bike able to go toe to toe with the mighty BMW S 1000 R, Aprilia RSV4 and Ducati Panigale when they were introduced. First introduced in 2011, the 10R was competitive right off the showroom floor and was well ahead of its Japanese rivals. It was further enhanced in the past years culminating in the bike track tested here. 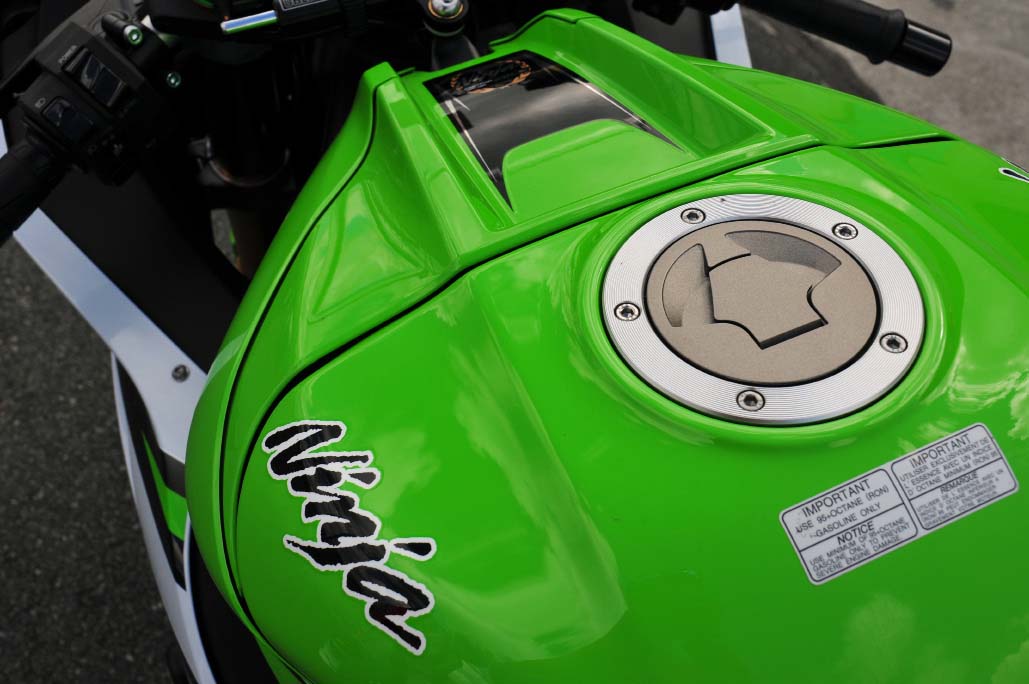 Kawasaki celebrated both the world championship and three decades of the Ninja brand with the Ninja ZX-10R 30th Anniversary edition model.  It has a special graphics featuring Lime Green/Pearl Stardust White paint with 30th Anniversary badges on each side of the fairing. Under those special graphics is a 998cc inline four-cylinder engine, with its 76mm x 55mm oversquare bore and stroke dimensions producing over 200hp and sends it to the rear wheel by means of a six-speed transmission. 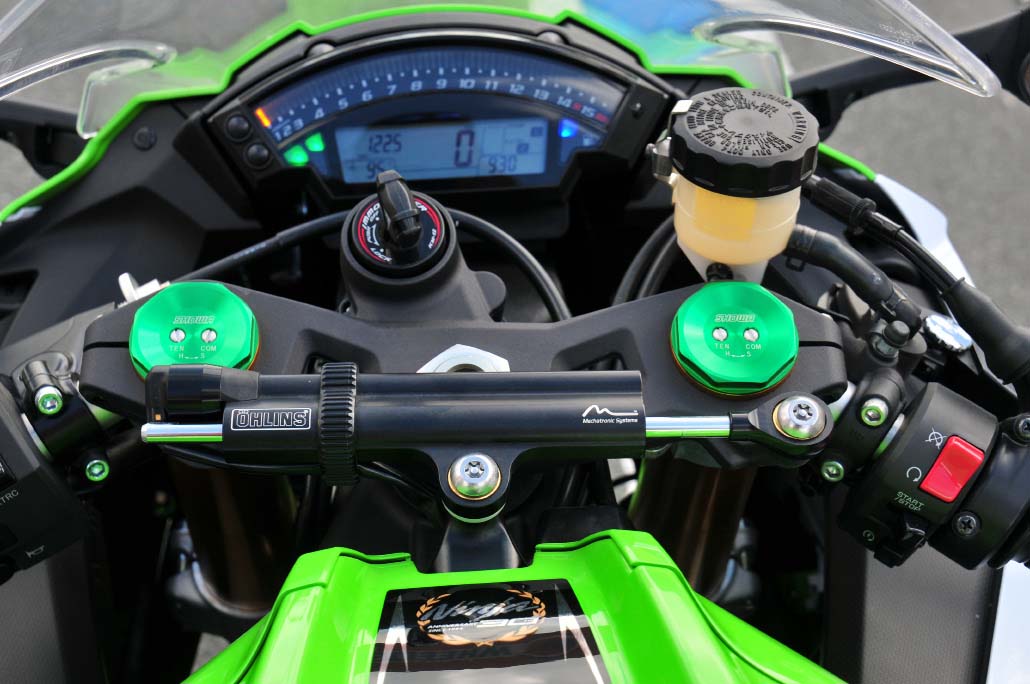 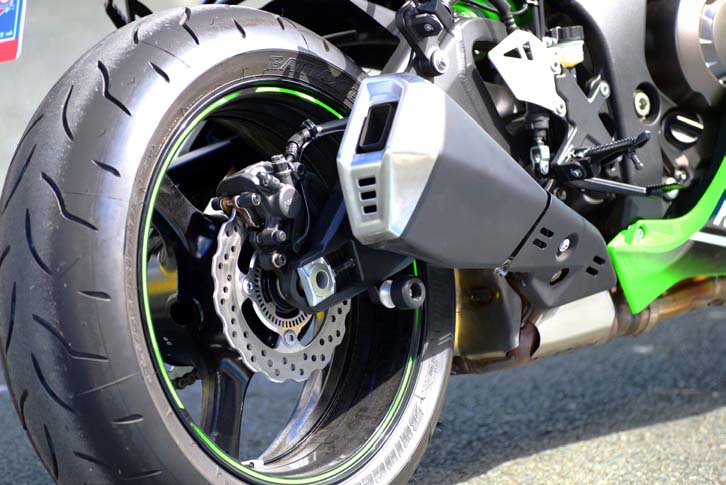 With Clark International Speedway (CIS) as our playground, WHEELTEK, let us loose on the mighty ZX-10R! Our test team got to sample a world-class superbike with the latest electronic gizmos and it was indeed a treat and actually surprised a couple of us.

One of the biggest surprises is that the big ZX-10R was not at all intimidating to ride on the track. The combination of Kawasaki Traction Control, Power Mode Selector and slipper clutch gave so much confidence to the rider that allows him to ride faster and safer. 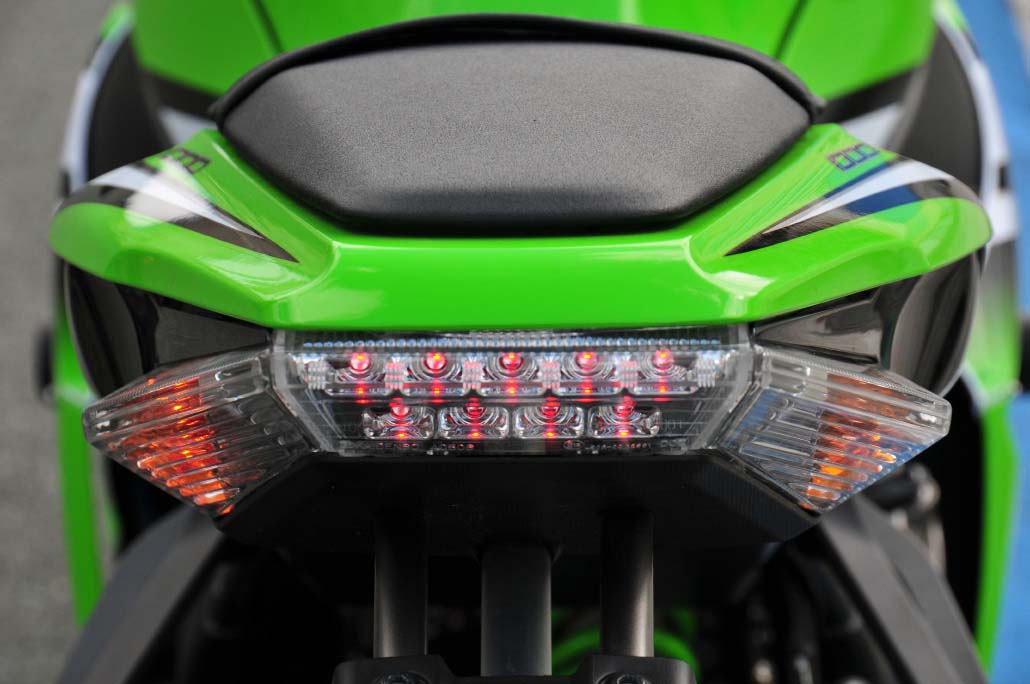 The slipper clutch has got to be the best riding aid for riders with average sport riding skills as it prevents the rear of the bike from skipping during downshifts when entering a corner. This eliminates the nervous feelings created when a rider is not so good on the clutch during downshifts for rev-matching which usually causes bike and engine instability issues while leaning in.

Meanwhile, the Power Mode Selector was useful as you can work your way up the power levels as your confidence and skills improve with more time on the bike. Similarly, the Traction Control can be dialed down or completely turned off. 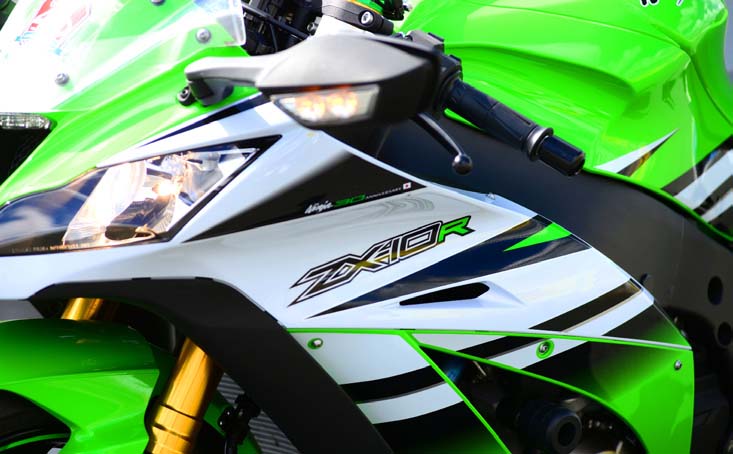 Another surprise is the handling which is quite nimble and light despite its slightly longer wheelbase compared to other sportbikes. The Big Piston suspension fork is a very impressive Japanese OEM part and really makes the bike feel very composed on the track. It is a little complicated for novice riders to adjust, but once you are happy with a  setting it doesn’t  hurt to stay with it unless you will compete or race seriously. You need to be a very good rider to really fine tune suspension for a race.

Among the three bikes that we were testing that day, we found the lime green superbike to be the most enjoyable and most addictive bike to ride. It ended up being the most used bike by most testers. This says a lot about this bike; it has world- beating power and handling, yet you can set it up to be ridden safely by an average sport rider.  Now anybody can feel like Tom, whether its Tom Cruise or  Tom Sykes, the Ninja can adapt! 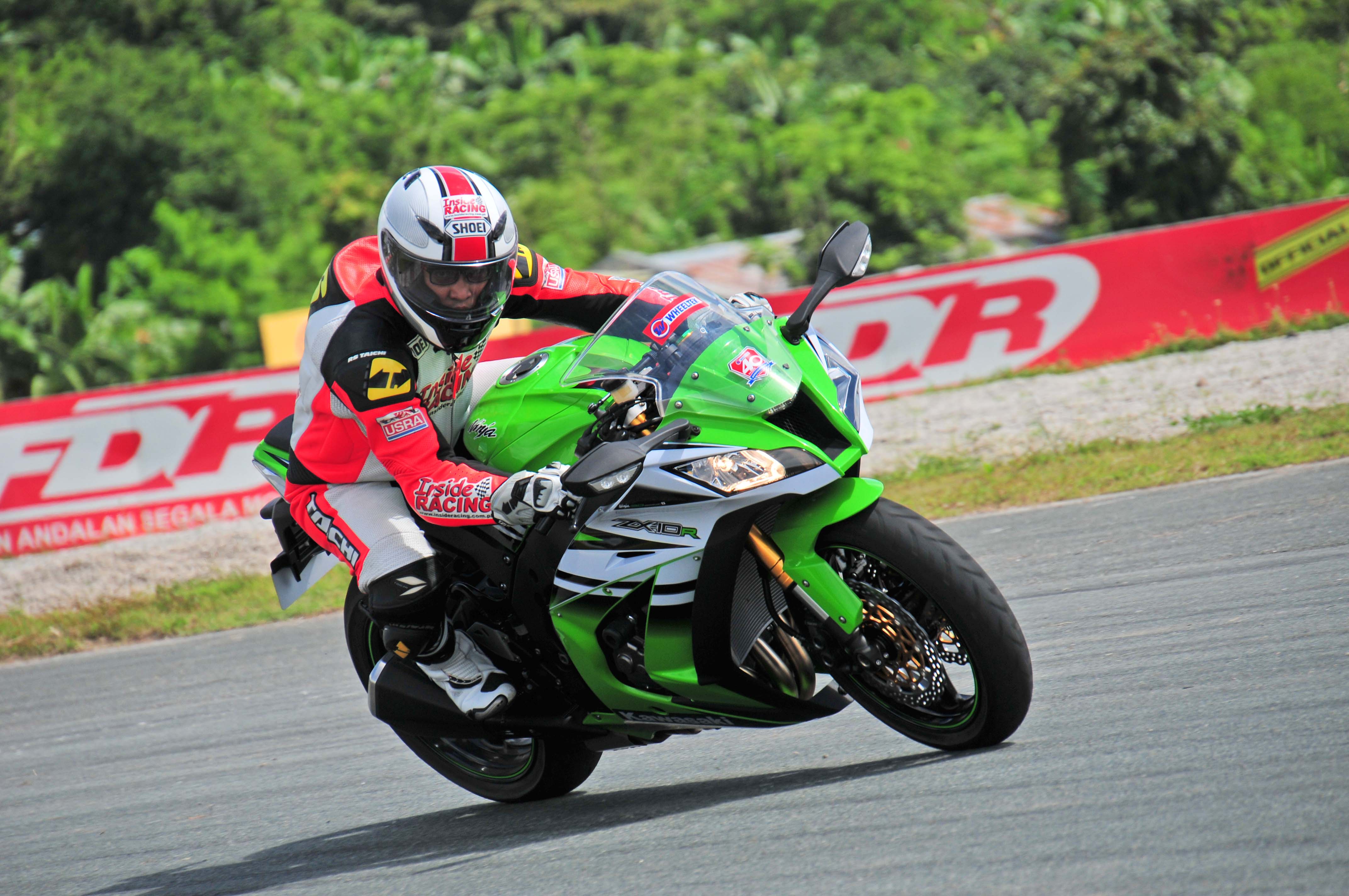 Al  Camba: “Before riding the ZX-10R, I did a lot of research and learned about its high tech electronic package just like the European exotics and easy to ride nature. You see, this will be my first liter sportbike ride on a racetrack and I was a bit skeptical if I can ride it safely at speed and enjoy myself. Fortunately everything other journalist and owners said was true. The ZX-10 R not only has mind bending performance, it also has an electronic package that you can customize to suit your riding level and road conditions. I particularly fell in love with the power delivery, traction control and the important slipper clutch that let me ride the bike better than what my skills purchase. With the slipper clutch, the bike was very stable entering into the corners as I downshift regardless of my clutch and throttle inputs which gave me invaluable cornering confidence. The ergonomics was also very good to me as the seat height and bar positions are spot on. I did notice that it was a bigger bike, not because of its weight because it is actually light for a liter bike, but because of its wheelbase that you feel when cornering, however it gave the bike stability at high speeds. The ZX-10R’s traction control, power levels, and slipper clutch gave me tons of confidence that let me ride the bike faster. Among the three bikes that we were testing that day, I found myself asking of the Ninja’s keys most of the time and I spent majority of my laps on board the green superbike. This says a lot about this bike; it has world-beating power and handling, yet you can set it up to be ridden safely by an average sport rider like me.  Now anybody can feel like Tom, whether  it’s Tom Cruise or  Tom Sykes, the Ninja can adapt! Truly a legendary sportbike at its best ever!” 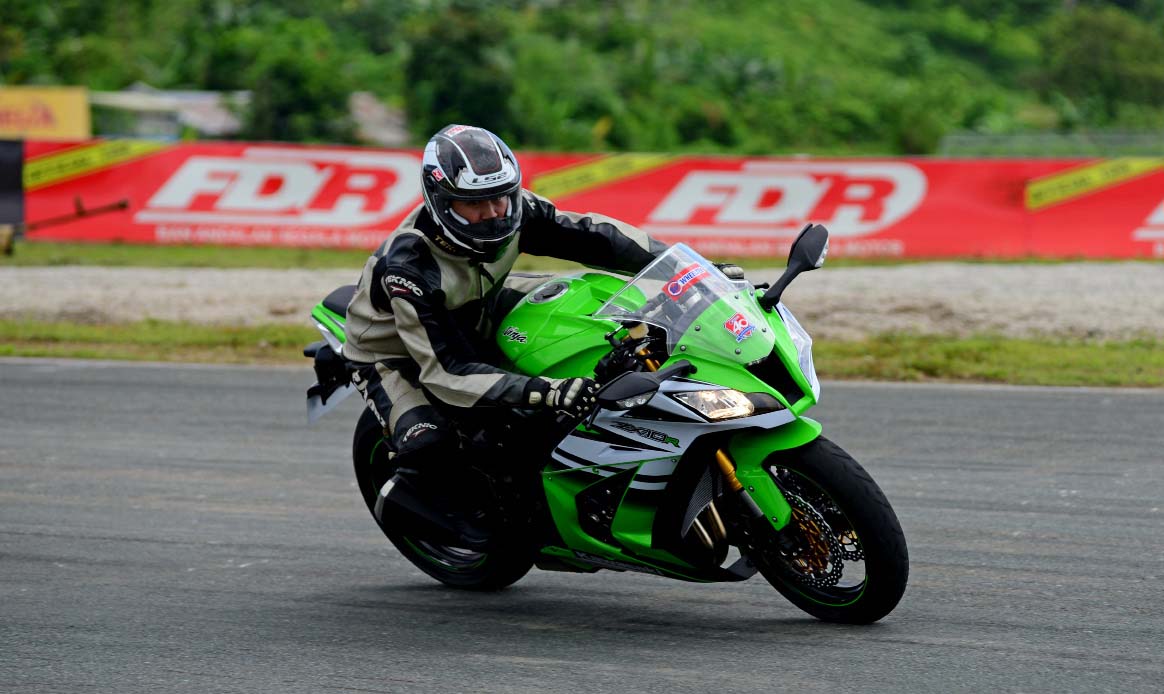 Philip Bonza: “This green Japanese liter sportbike is a powerful beast that moves like ninja. Without the electronic power features, this liter bike is a handful but because of the different power modes and traction control settings, it became friendly to ride. At first while doing my sighting lap, it surprised me that this bike feels light for a 1000cc bike, is nimble and easy to handle. Going faster and faster in each lap, the green beast became more fun to ride. I tried many times to down shift with speed, but the slipper clutch corrected and controlled it to a smooth corner entry.  The Tokico brakes begged me to hunt for corners with its superb stopping power. The Showa suspensions match the green accents and the clickers adjust for rider preference for play and stability. I tried the different power modes and team green has done a superlative job, the engine is so powerful! At full power mode, it can throw me backward every time I make a shift and I really need traction control.  I did 210kph top speed and the electronic steering damper works and control not to wobble at any case. The ergonomic is just right for me, my arms are relaxed on the handlebars and I can move my butt further on the saddle. The foot controls are in good position and has adjustable pegs for perfect fit. The instrument panel gives more information in LCD with click of the buttons and the tachometer is in flashing orange to red LED. This Anniversary Edition has an excellent color combination and paint job with super fine attention to detail. Track is now my favorite playground because of this green beast liter sportbike.” 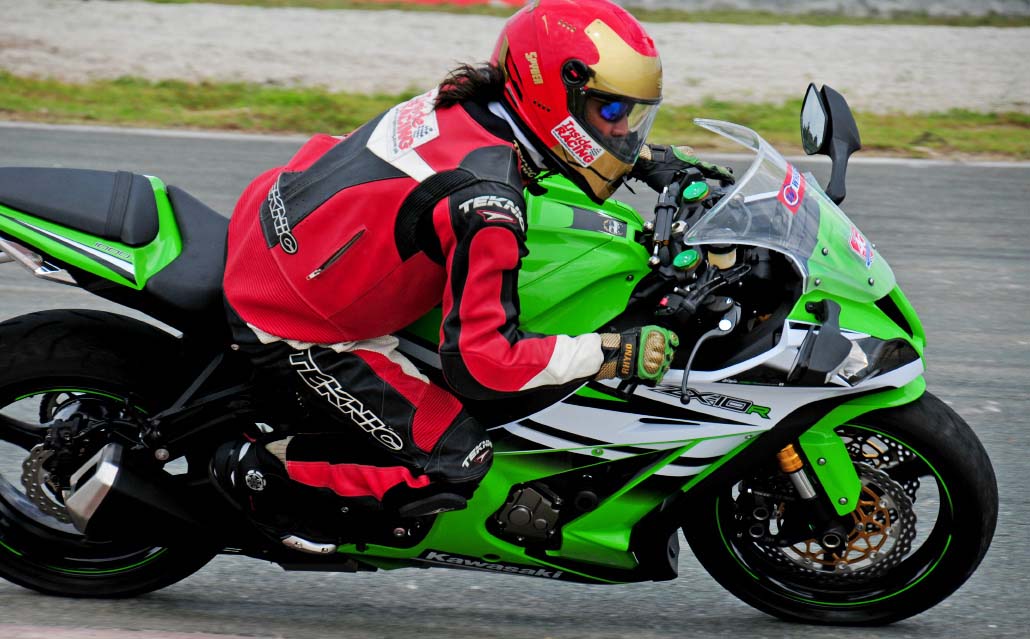 Ricci Abrina: “This big liter bike is surprisingly tame and stealthy because of its electronics with a host of combination variants – for braking, engine mapping and traction control. The ZX10-R is equipped with a built in electronically controlled steering damper for better steering feel and it’s made by OHLINS. Silent, quick, agile at any gear – this bike is known for winning WSBK or World Superbike races around the planet. The brakes are robust and handling is in the light side. Suspension is typically soft (but fully adjustable) and the tires that came with the test unit is not so sticky for its power. The styling on the cluster of gauges is modern and easy to read as the digital LED tachometer indicates at a glance if you have passed the rev limit as it blinks. Some people say the Kawasaki Ninja ZX10-R is for the first time racers – I say this thing is a monster and in order to tame it you have to ride it hard in the track.”