A hot, wet and demanding OR Thailand Grand Prix was the scene for Red Bull KTM Factory Racing’s Miguel Oliveira to take his KTM RC16 to the top step of the podium for the second time in 2022 and for the fifth time in his career in the premier class.

MotoGP worked its way through 26 wet laps at the Chang International Circuit for the first Thai Grand Prix since 2019. As well as the physical and mental challenge, riders had to search for optimum grip after torrential showers had dowsed the track and even caused the Moto2 race to be shortened and then curtailed.

Oliveira, already a winner in wet conditions this year, was able to shine. His superior feel and speed through the final sector of the Chang layout enabled him to overtake Jack Miller and lead from the fourteenth circulation all the way to the flag.

Brad Binder, making his first MotoGP appearance on the KTM RC16 in Thailand, launched from the fourth row of the grid and from a slot next to his teammate. He was hit inside the first two laps by Aleix Espargaro and forced off the track. From that point he fought his way back to 10th.

Raul Fernandez took his Tech3 KTM Factory Racing machine to 15th and the final points-scoring berth. The Spaniard had started to feel poorly on Thursday night in Buriram but produced an admirable performance to last the distance in Thailand. Remy Gardner crashed out through the first sector at mid-race distance.

Binder, 6th, is 25 points behind Jack Miller for 5th in the world championship. Oliveira is 8th while Red Bull KTM Factory Racing is now the 3rd best team in the series and KTM are 4th in the Constructor’s standings.

MotoGP gathers again at the scenic and flowing Phillip Island circuit for a long overdue visit to the popular venue. The Animoca Brands Australian Grand Prix will take place on October 15-16. 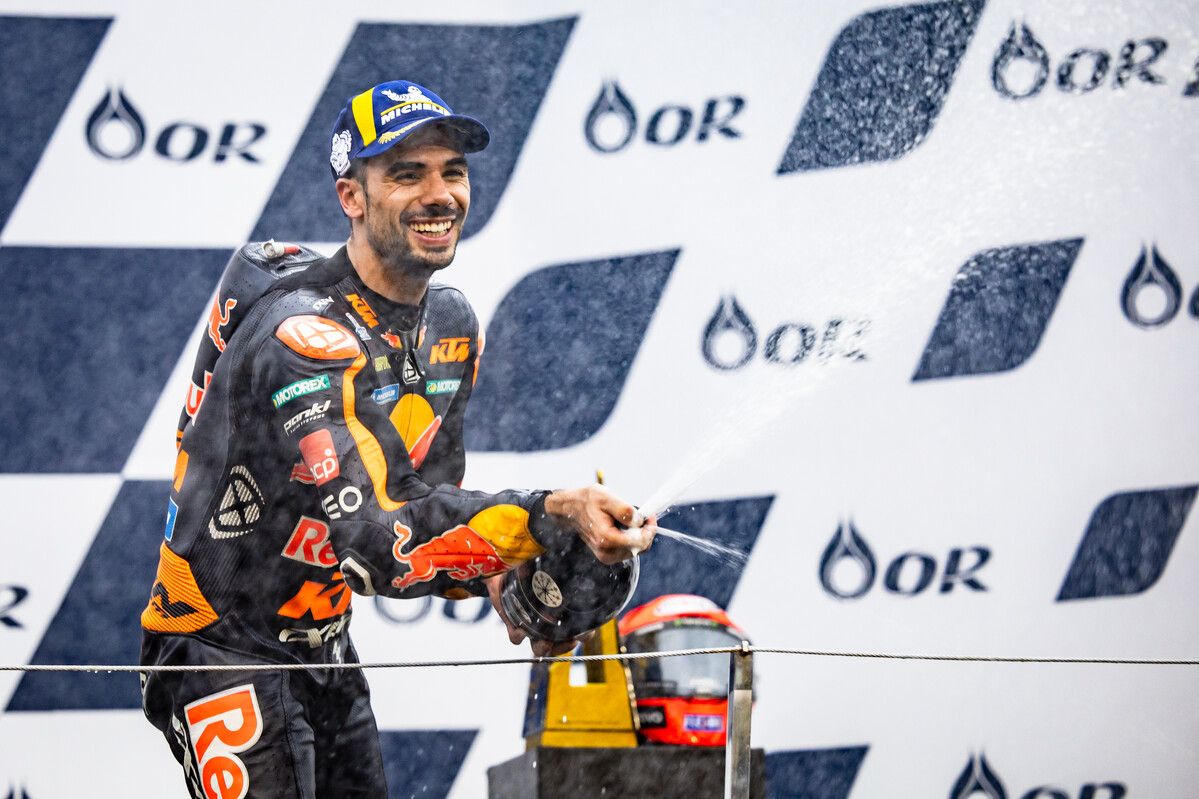 Miguel Oliveira: “For sure that was a long race! But I cannot complain, every time we get a chance to go for it in the wet then I am super-fast. When I saw the weather I was having flashbacks to Indonesia and was trying to keep my feet on the ground. I wanted to make a good start and keep the mistakes to a minimum. I’m really satisfied with this end of season win. Yeah, it’s in the wet but I’ll take a win in any condition!”

Brad Binder: “I was really looking forward to the wet race. I didn’t get a great start but passed a few riders and then on lap two someone hit me on the inside and I went off the track. When I rejoined deep in the pack I couldn’t see anything! When I went down the straight it was like someone had a blanket over my eyes because of the spray. Luckily, I pulled back a few positions and managed 10th place. It’s frustrating because I know I could have done a much better job. Next stop Phillip Island.”

Raul Fernandez: “I had wished for the rain to come because I was not at my maximum physically, so I was pretty happy. I felt good at the beginning of the race but then our pace started to drop and I started losing confidence lap after lap. For this I am frustrated because I think that I could have finished in the Top 10. The track was getting worse so I had to analyze and decide how to at least finish in the points. Anyway, it was good having some battles with Brad Binder, Aprilia riders and we grabbed one point, which is very positive.”

Remy Gardner: “I enjoyed the first few laps of the race although it was difficult to have visibility on the straights with all the water. I felt really good at the start and was registering good lap times. Unfortunately, I ended up crashing, which is a shame because I think that we could have finished in the top 10. Next, Australia, so I am looking forward to racing there, and hopefully we can have a good result at home.”

Francesco Guidotti, Red Bull KTM Team Manager: “Miguel did an incredible job. He was 10th on the first lap but the visibility was low but he recovered and was very clever and fast with his moves. He was on a mission and we know how good he is in these conditions. Once he was in the lead he could make his pace: fast and safe. Let’s not forget that Miguel was also fast in the dry and so was Brad. He was unlucky that Aleix put him out of the track because it was difficult to recover from there. We also improved our position in the teams and recovered some ground in the Constructors standings. Three rounds to go!”