Lopez Beats Canare By 0.145s In Another Thrilling MotoIR race 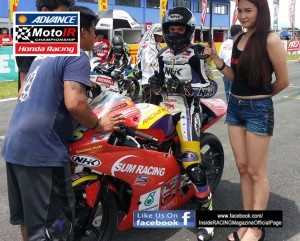 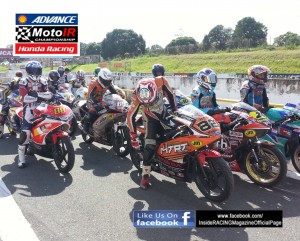 After their tight battle in Carmona last August 17, the Herbert Lopez and Rizaldy Canare show continued at the 8th round of the 2014 Shell Advance MotoIR Championship Presented by Honda at the Batangas Racing Circuit last September 7.

Both NHK-Racewell riders were once again into it for the win which was crucial going to the last round to be held in October time. This time the two were joined by young Ralph Kenneth Torres of Sum Racing who diced it out with the two all throughout the 10-lap race. Torres got the pole position of the race.

The three displayed awesome riding and took turns in taking the lead but in the end Lopez prevailed with only a 0.145s margin of victory over Canare and 0.243s advantage over Torres which manifested how close the race was much to the delight of racing fans.

Gio Adriano of EGV also was impressive as he triumphed over Robert Matthew Ramos by 0.078s in the likewise hotly contested MotoIR2 class. Juver Mirasol snagged the third place. Ramos despite finishing second in the MotoIR2 once again won in the Shell Advance MotoIR Youth Cup (SAMYC) wherein he was already qualified together with Gian Carlo Mauricio in the Shell Advance Asia Talent Cup Shootout for 2015 which will be held in Sepang, Malaysia this October 26.

The 9-race 2014 Shell Advance MotoIR Championship Presented by Honda is also supported by Racing Boy, FDR, Bridgestone and Vee Rubber. Now on its third season, the championship is organized by InsideRACING and sanctioned by the Unified Sports and Racing Association (USRA) for Motorcycles, Inc. The final race will be on Oct 5 at the Clark International Speedway.

DILG: Back-ride will be allowed starting July 10 but for couples only

Bajaj RE aids in Frontliners Contact Tracing in Pasig City

Be smooth when you ride in the rain