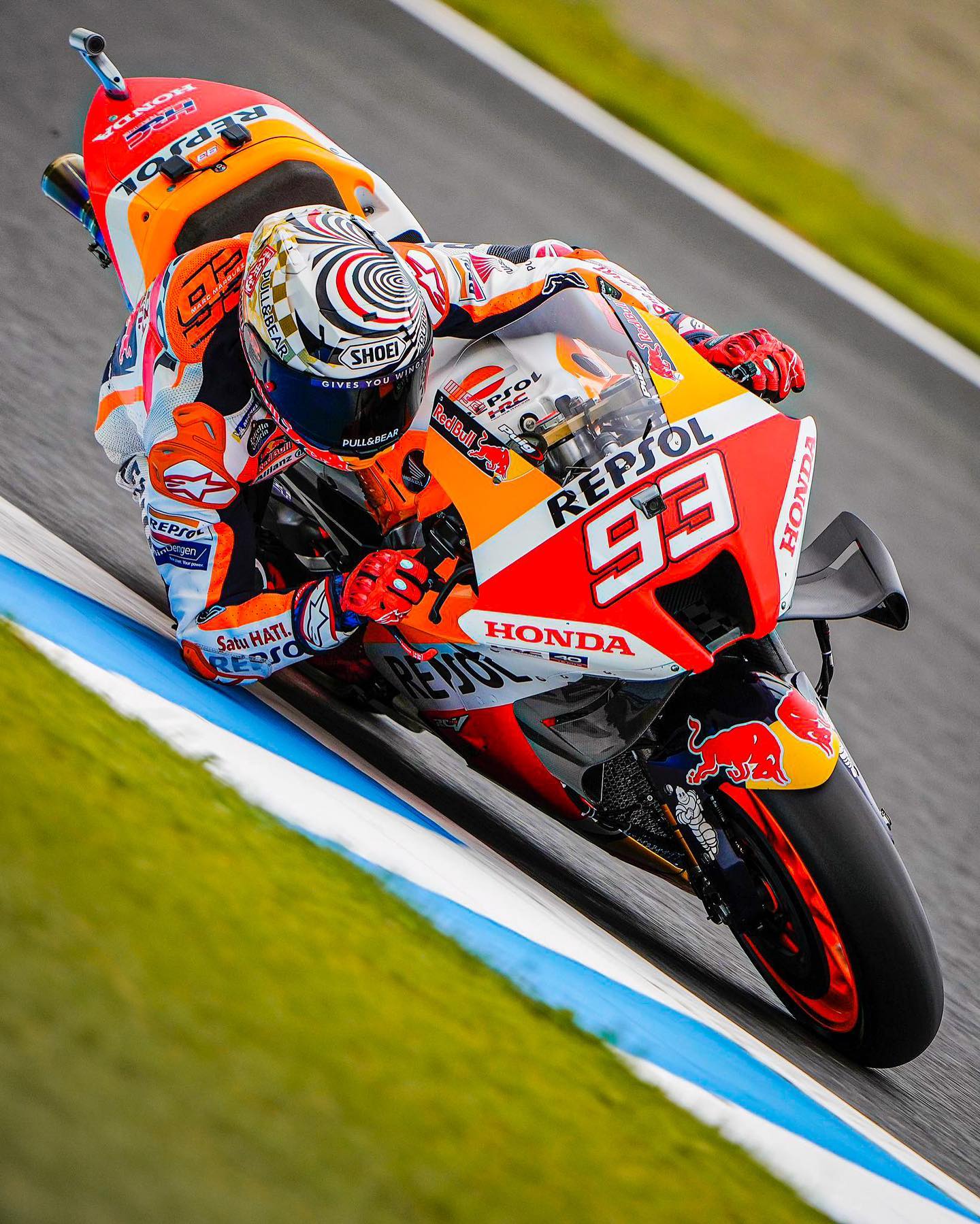 The heavens opened over the Mobility Resort Motegi and a pole position drought was also broken as Marc Marquez qualified fastest for the Motul Grand Prix of Japan. After a 90-minute delay to the schedule, the Repsol Honda Team rider set a 1:55.214 in a wet MotoGP™ Q2 session to score a first pole since the 2019 Japanese GP. Second went to Johann Zarco (Prima Pramac Racing), while Brad Binder (Red Bull KTM Factory Racing) made the front row for the first time in the premier class. Although there was joy for eight-time World Champion Marquez, none of this year’s three title contenders qualified any higher than sixth. That was Aleix Espargaro (Aprilia Racing), with neither Fabio Quartararo (Monster Energy Yamaha MotoGP™ Team) nor Francesco Bagnaia (Ducati Lenovo Team) making the first two rows. 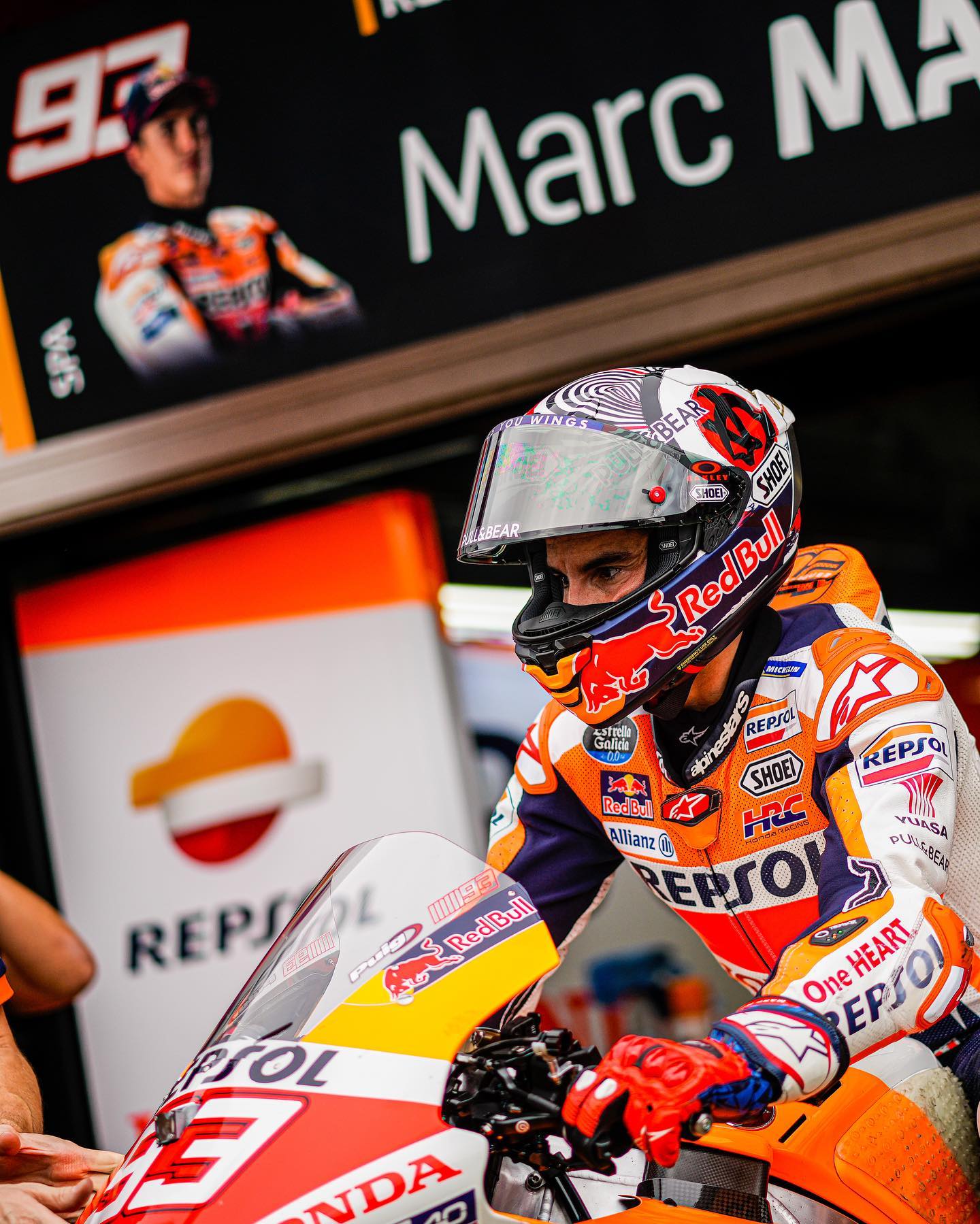 A thunderstorm during Moto2™ Q2 caused a 90-minute red flag period and the cancellation of MotoGP™ FP3, before Q1 for the premier class field finally got underway at 16:10 local time (GMT +9). That session also began in heavy rain but it had stopped by the time Q2 got underway and, although Michelin wet tyres were still in order, there was a rush to exit pits in order to take advantage of the conditions. Zarco, who had track knowledge from Q1, came out of the blocks quickest, and that was still the case when he set a 1:55.774 on his second flying lap. 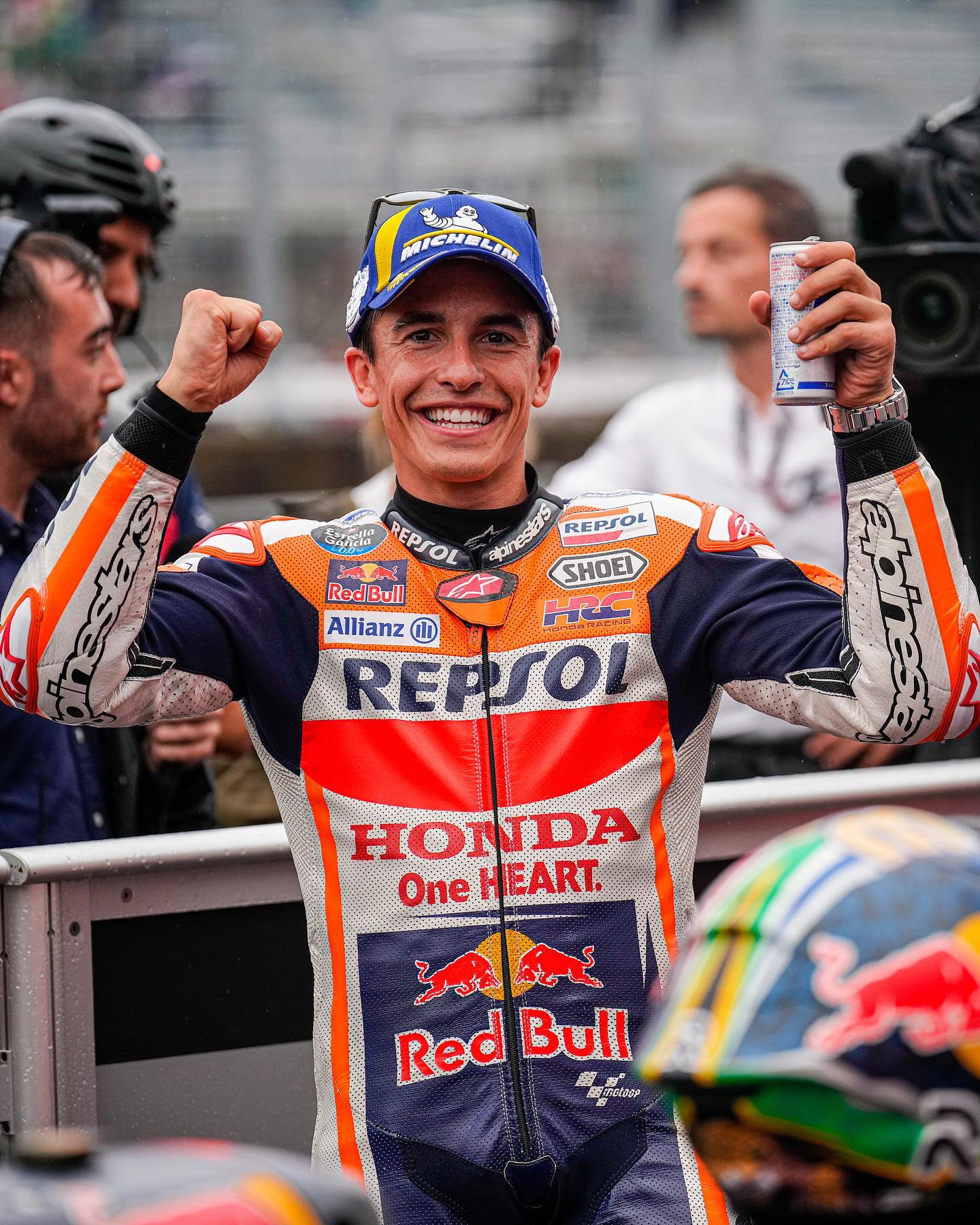 Enter the Marquez. The World Champion is still recovering from a fourth operation on his right arm but signalled in FP1 and then FP2 – when he was also fastest – that he would be a threat in this, the second round of his latest comeback. He was only a narrow second to Zarco despite a small error at Turn 11 and then took over top spot with a 1:55.698 on his third flying lap. Marquez then slashed another seven tenths of a second of his personal best to tighten his grip on provisional pole. 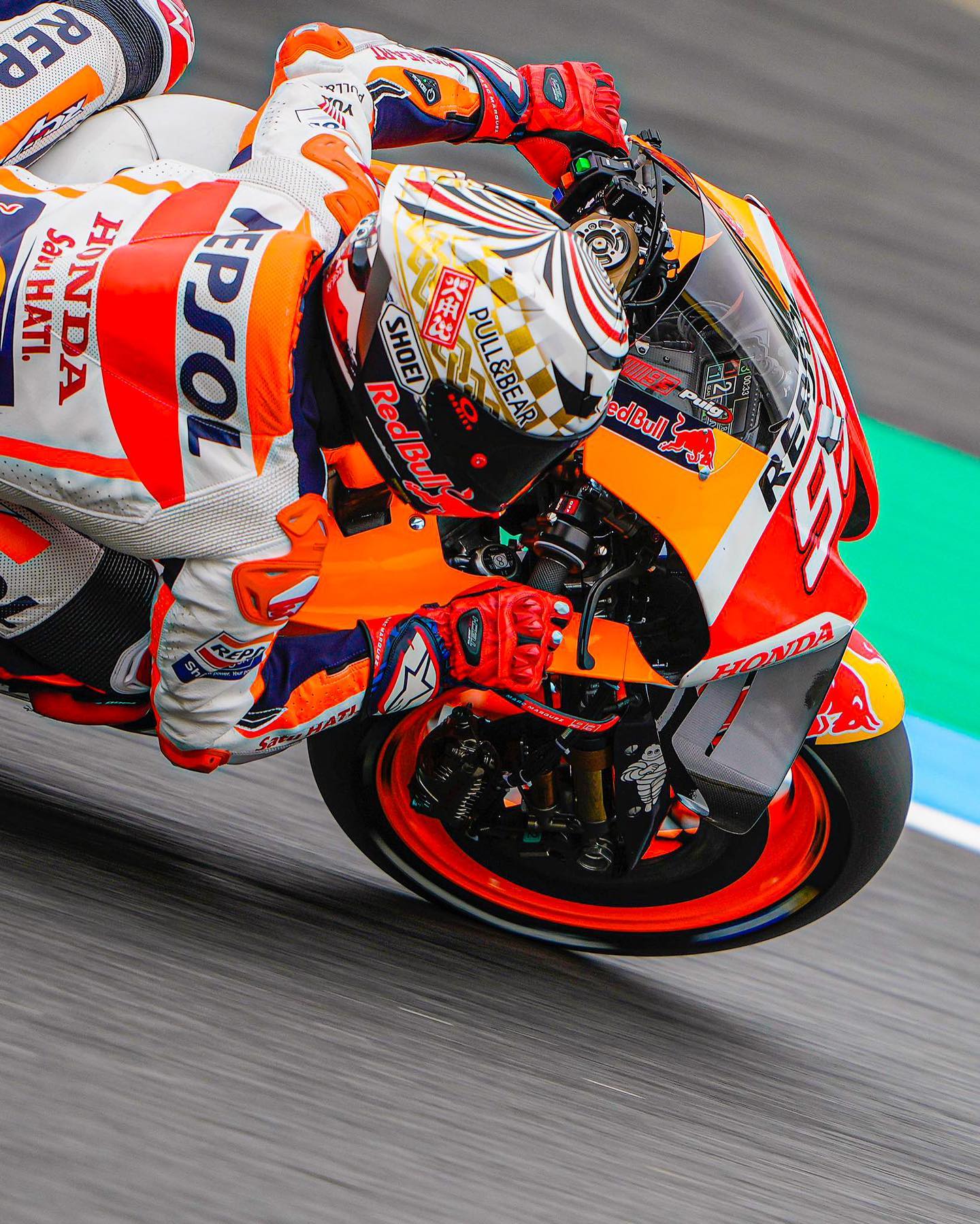 After a visit to the pits, Zarco closed the gap when he set a 1:55.422 and he was one of two riders who looked like they might ruin Marquez’s fairytale in the final moments. However, Zarco ran wide at Turn 11 on his final lap and while Binder was on a quick one, he eventually reached the finish line in a time of 1:55.537 to earn third on the grid. Maverick Viñales (Aprilia Racing) was thus bumped back to fourth after going as quick as a 1:55.620 and Jorge Martin (Prima Pramac Racing) rounded out the top five on a 1:55.686.

That means we have to go all the way back to sixth to find one of the title contenders. Aleix Espargaro was seventh when the chequered flag out but managed to improve marginally to a 1:55.771 to also claim a berth on the second row as he tries to make up a 17-point deficit to World Championship leader Quartararo. Speaking of ‘El Diablo’, he was only ninth-fastest in Q2 with the 1:56.326 which he set on his first flyer. Still, Quartararo was better than Bagnaia, who could not extract any real pace from either of the Ducatis he rode during the session, which he finished last. Pecco, who has four wins and a second place from the last five races, faces an uphill battle to repeat either of those results from 12th on the grid tomorrow.
Jack Miller (Ducati Lenovo Team) had a big front-end save midway through the session on his way to a 1:55.784 which was good enough for seventh, while Miguel Oliveira (Red Bull KTM Factory Racing) crashed after setting a 1:55.895 which would leave him eighth on the grid. Tenth went to #10, Luca Marini (Mooney VR46 Racing Team), and 11th to Pol Espargaro (Repsol Honda Team). 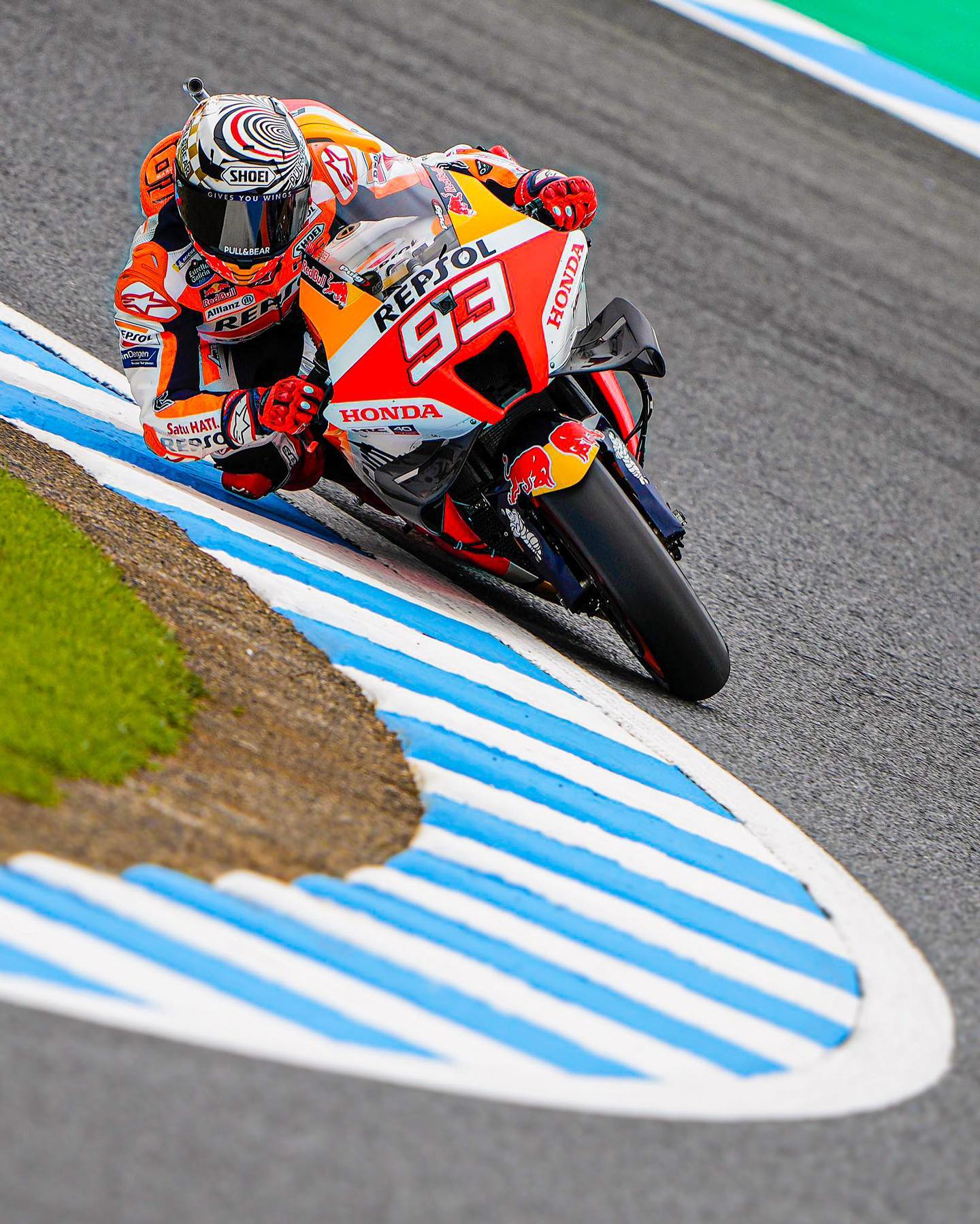 Pramac dominated Q1, Zarco fastest on a 1:55.300 and Martin into the top two on a 1:55.795, but there was big drama for another Ducati rider. Bastianini might have ridden himself back into title contention with his win last weekend at Aragon, but he is firmly on the back foot again after crashing in qualifying. The Italian had only improved to third on a 1:56.130 when he tucked the front at Turn 5 – the same corner at which he crashed on Friday in FP1 – and went down again. Making matters worse, he is set to start 15th after Franco Morbidelli (Monster Energy Yamaha MotoGP™) clocked a 1:56.006 and then Marco Bezzecchi (Mooney VR46 Racing Team) took over 13th with a 1:55.934.
Row 6 will be Fabio Di Giannantonio (Gresini Racing MotoGP™), Alex Marquez (LCR Honda Castrol), and Alex Rins (Team Suzuki Ecstar), while Row 7 is wildcard Tetsuta Nagashima (HRC Team), Remy Gardner (Tech3 KTM Factory Racing), and Joan Mir’s injury replacement, Takuya Tsuda (Team Suzuki Ecstar). Raul Fernandez (Tech3 KTM Factory Racing), Darryn Binder (WithU Yamaha RNF MotoGP™ Team), and Takaaki Nakagami (LCR Honda Idemitsu) all had crashes in Q1 as they qualified 22nd, 24th, and 25th respectively. The odd man out in the bottom four on the grid was therefore Cal Crutchlow (WithU Yamaha RNF MotoGP™ Team) in 23rd position.
words from: MotoGP, photos from Marc Marquez facebook page
Thank you for visiting insideracing.com.ph. While you are here, kindly don’t forget to click on our advertiser ads above, visit their site and consider them for your motorcycling needs. It will help us a lot.
You can also order a copy of our monthly print magazine for more riding contents to read and enjoy at your leisure anytime by clicking here.