After having achieved their 1 million annual unit sales milestone in 2016, the Motorcycle Development Program Participants Association Inc. (MDPPA) yet again receives another feather in their cap, having recorded a year-on-year sales growth of 16% in 2017.  MDPPA is an organization of motorcycle manufacturers in the Philippines namely, Honda, Yamaha, Suzuki, Kawasaki and KYMCO.  These five brands have closed the previous year with a combined annual sales of 1,319,084 motorcycle units.

“A growing economy in the country means more buying capability for the average Filipino. It also meant more room for businesses to expand. Hence, the significant rise in demand for both Automatic (AT) models for personal use and Business (BU) models for commercial use,” said MDPPA President Armando B. Reyes. “We were also able to tap new market segments by offering new choices in our product line up which are more relevant and more affordable as well,” he added.

According to Reyes, the 42% sales growth in the AT segment is an indication that new customers are coming in because AT models, also known as scooters, are more user-friendly to novice riders. It is much lighter than most motorcycle models and has an automatic transmission. There is no need to learn how to shift gears. Like in the automobile industry, buyers now have the tendency to prefer automatic transmission because it is easier to operate in our worsening traffic conditions. Even seasoned riders would be able to appreciate the convenience of riding a scooter.

While a total of 389,168 AT units were sold last year, it is not as much as the BU models which sums up to 436,658 units. The BU segment attained 18.6% growth, second only to AT, but this segment has the most number of units sold. This type of motorcycle has been in the local market much longer than most models and has gained popularity because of its functionality and robustness. Affectionately referred to as “pantra”, short for “pantraysikel” (for tricycle use), the business model is intended for heavy-duty usage. If not used for transporting passengers via sidecar attachment, it is fitted with a rear top box to be used for courier or delivery service. The increase in demand for business models is brought about by the new trend in how the customers buy products. Instead of personally visiting a store, a good number of buyers now would prefer to purchase items online and just have it delivered to his location. Delivery service is no longer limited to fast food.

The Moped (MP) or Underbone segment gained only 3% growth in 2017 but in terms of actual sales volume, it competes with the Business models, having sold 430,465 units. The moped is the motorcycle of choice by budget conscious customers because it offers the most affordable variants, though it also comes in more premium trims. The Street (ST) model is a standard motorcycle like the Business model except it is designed with aesthetics and comfort
in mind. Most variants are equipped with some technological advancements to be able to achieve better performance. Because of the additional features, the price tag of the STs may tend to be restrictive for some. This is why it registered a decline in sales. Only 60,426 ST units were sold in 2017 as more buyers gravitated towards the more practical AT and BU.

Motorcycle sales has been on an upward trend for the past several years, from 702,597 units sold in 2012 to over 1.3 million units in 2017. The MDPPA is projecting a 2 million annual unit sales by 2020. As more and more motorcycles ply our streets, the MDPPA is committed to promote road safety through various intensive training programs held in different parts of the country. This is done in collaboration with local government units, Philippine National Police (PNP), Land Transportation Office (LTO) and local motorcycle clubs. 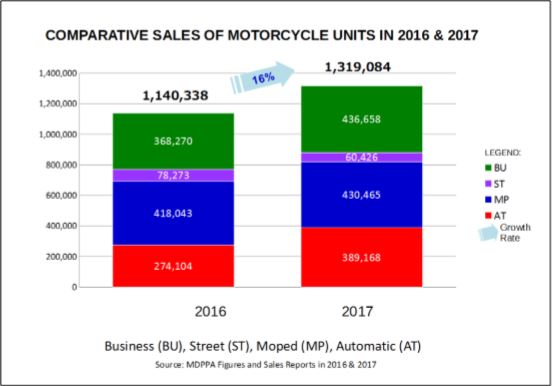 Olight does it again