The 6th leg of the 2015 Shell Advance MotoIR Championship Presented by Honda had a 6-lap full track wet race at the Clark International Speedway on August 9. 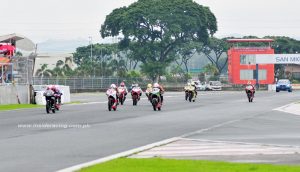 Paul Mark Doblada got the pole position once more and the victory in the MotoIR class with a total time of less than 15 minutes. He also set the 2:32.080s fastest lap time in the race. It was a convincing win for Doblada as second placer Josh Reuben Tan of Moto Tan Racing Team crossed the finish line 14 seconds after. Zebra-Pertua-MLW-MTRT rider Dustin Esguerra finished third while Gulf Racing’s Romer Corbe ended up at fourth place.With 150 points after Round 6, Doblada comfortably leads the MotoIR standings. 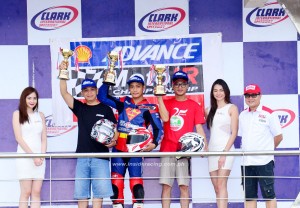 Moto Tan Racing Team’s McKinley Kyle Paz on pole position dominated the MotoIR2 class with a 10-second margin of victory over Access Plus’ Troy Alberto. Troy’s older brother TJ was third to cross the finish line in the MotoIR2 category. 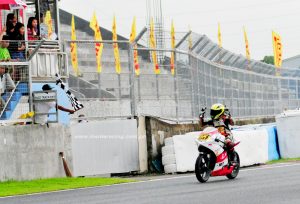 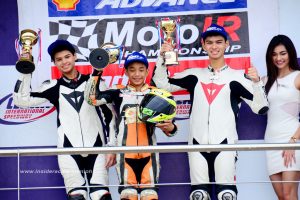 Eane Jaye Sobretodo of the Maico Buncio Foundation (MBF) was fourth, Replica Pro’s Edmar Quiambao was fifth and Rafael Lance Ortiz also of MBF finished sixth. Paz has now a total of 141 points to rank first so far in the MotoIR2 standings. 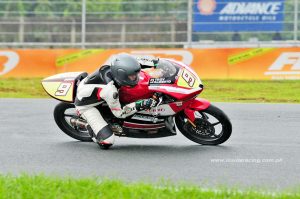 The 2015 Shell Advance MotoIR Championship Presented by Honda is supported by Racing Boy, Pirelli and Bridgestone. It is sanctioned by the Unified Sports and Racing Association (USRA) for Motorcycles, Inc., a member of the Federation of Two Wheels Association of the Philippines (FETAP). Round 7 of the series is on September 6 at the Batangas Racing Circuit.