The Motorstar Moto R155’s upright sitting position, wide handlebars, a commanding view of the road, its superb suspension components and a capable engine make it one of the best alternative commuter bikes for those looking to commute in the city with fun and an edge in style. 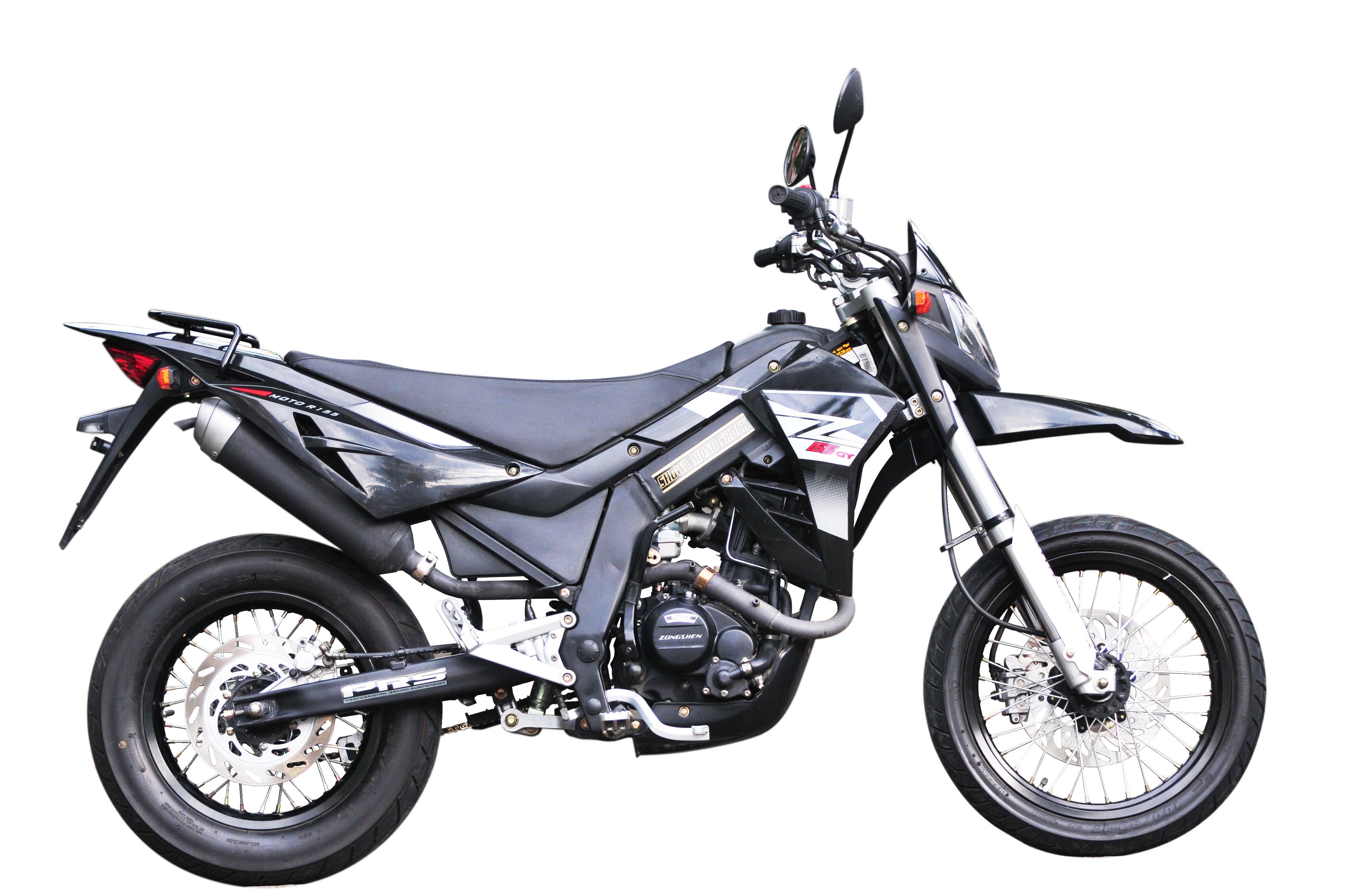 Motard or supermoto-styled bikes have a unique edgy appeal. They are different and not mainstream even in other parts of the world. First popularized in Europe, motards are a blast to ride than sport bikes or dual-purpose bikes on the streets. They provide the upright sitting position for comfort, wide handlebars for control, big legroom and a commanding view of the road found on tall off-road bikes yet have the performance, traction and comfort of pure road bikes. Truly, the best of both worlds in terms of commuter bike haven.

To satisfy their craving, some lucky local motard enthusiasts can decide on the expensive options from KTM or Ducati while many opt to go for the much less expensive route of modifying a local XR200 or other dual-purpose models by installing smaller wheels and wider street tires. But for those who still find this option out of reach, there is a much less expensive and simpler alternative for the ordinary Filipino commuter. 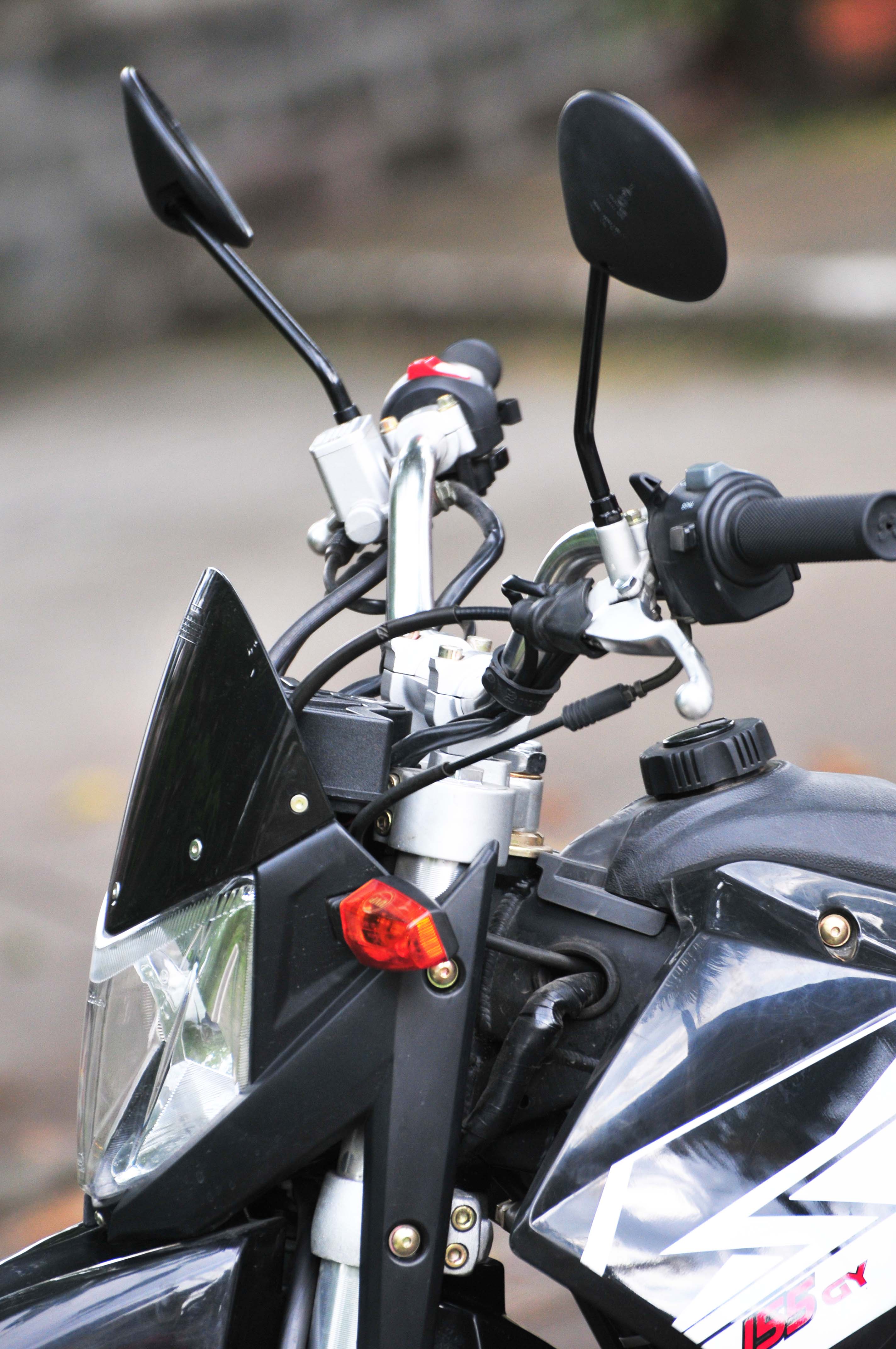 The Motorstar Moto R155 is a model designed and developed by one of the leading Chinese manufacturers Zongshen. The Moto R155 was developed to have a supermoto styling and riding feel right from the start. It may not have a European or Japanese logo on the tank (also not the price) but it has genuine motard styling and peppy performance suited to the small bike commuter market. 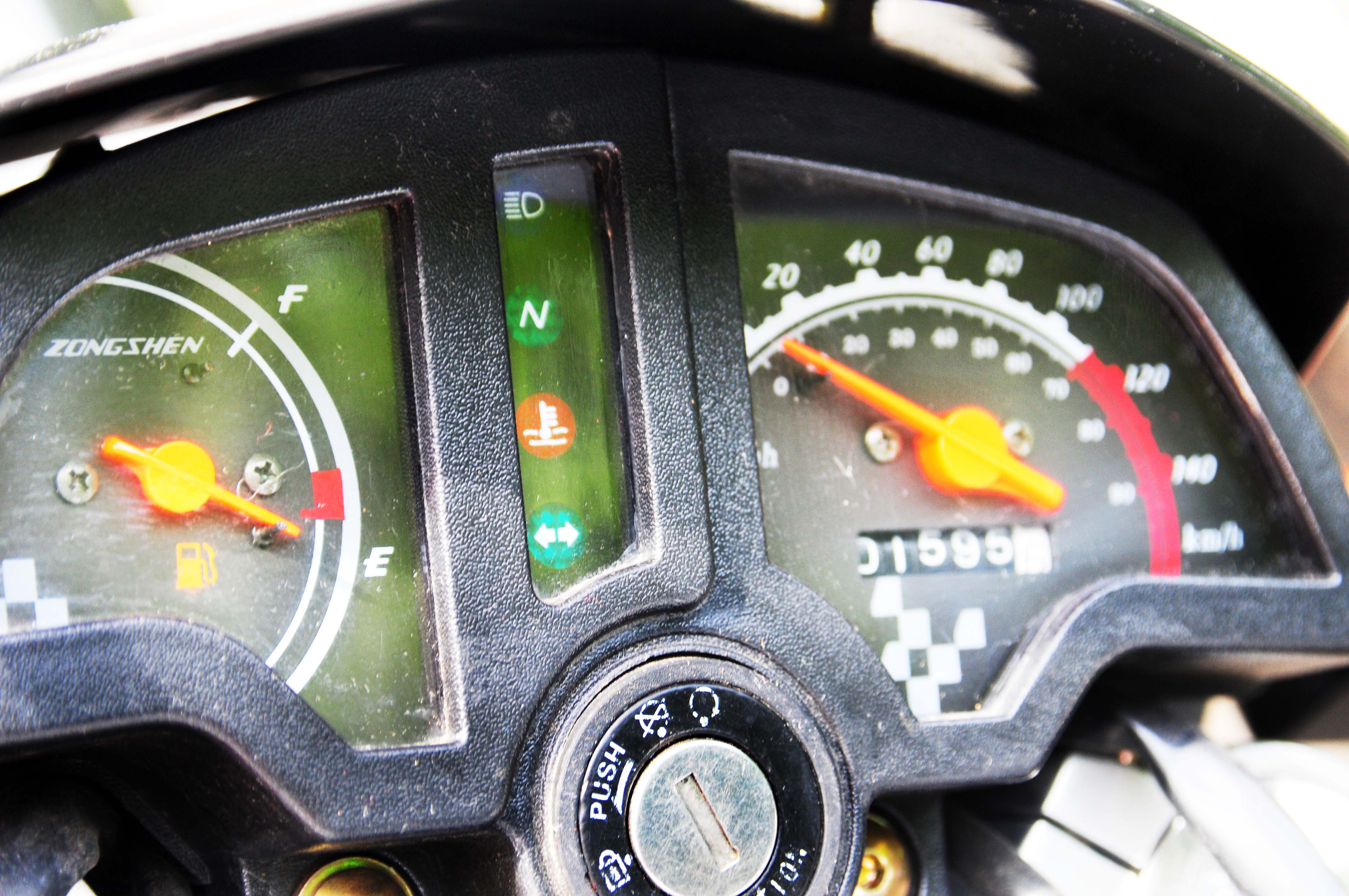 Looking at it, it gives the impression of a much bigger and more substantial motorcycle. The perimeter frame, big Showa forks, wide rims and tires, big disk brakes, wide aluminum handlebars, beefy aluminum pegs, foot controls and side stand are things you would normally find in much bigger and more expensive machines. Meanwhile, details like the pointy front fender, fork leg guards, headlight, rear panels, long motocross seat, engine under guard, wide blacked-out wheel rims, aluminum levers and foot controls, and serrated foot pegs give it the full super moto character. The only thing lacking is the handlebar guards. 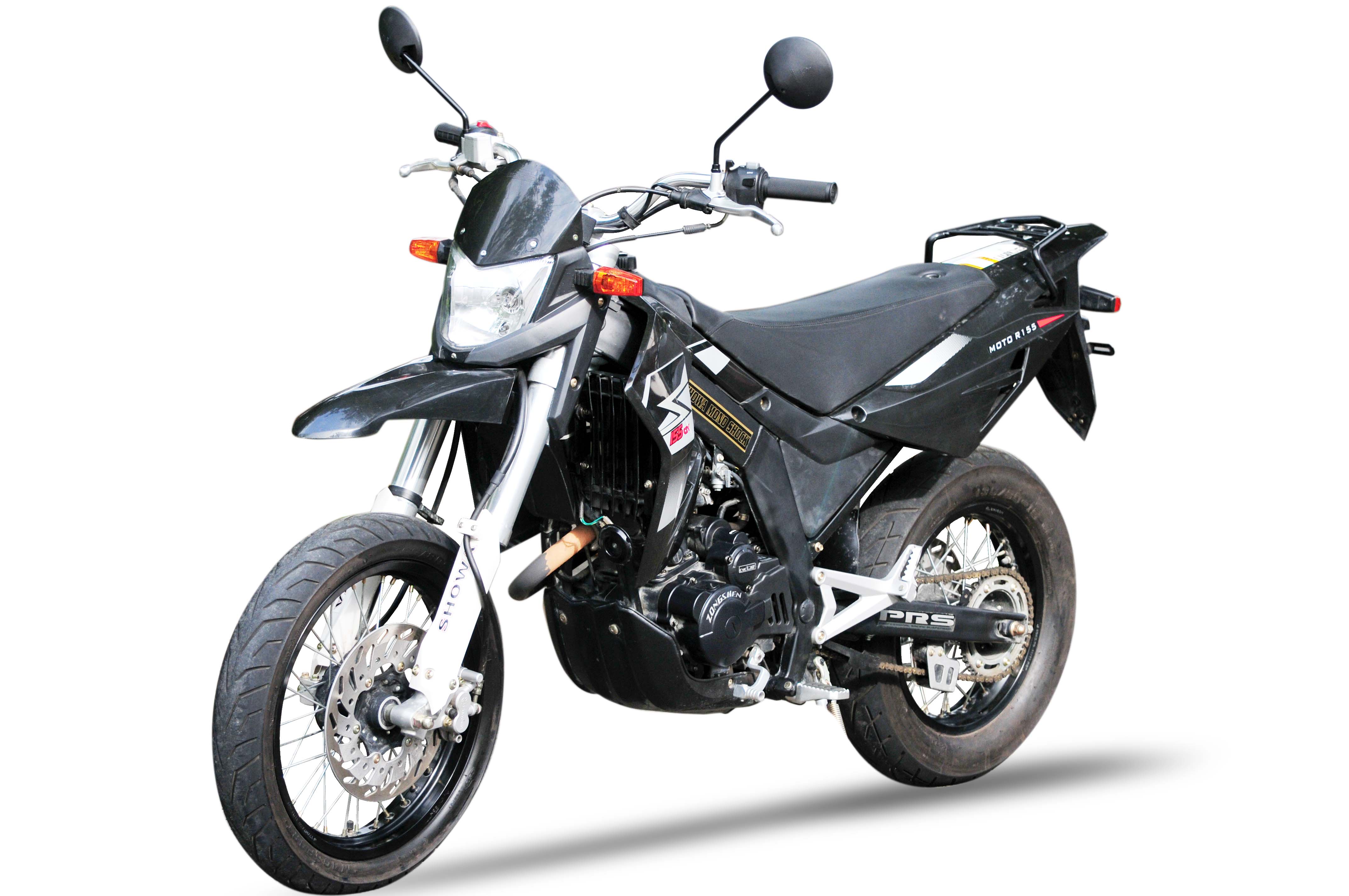 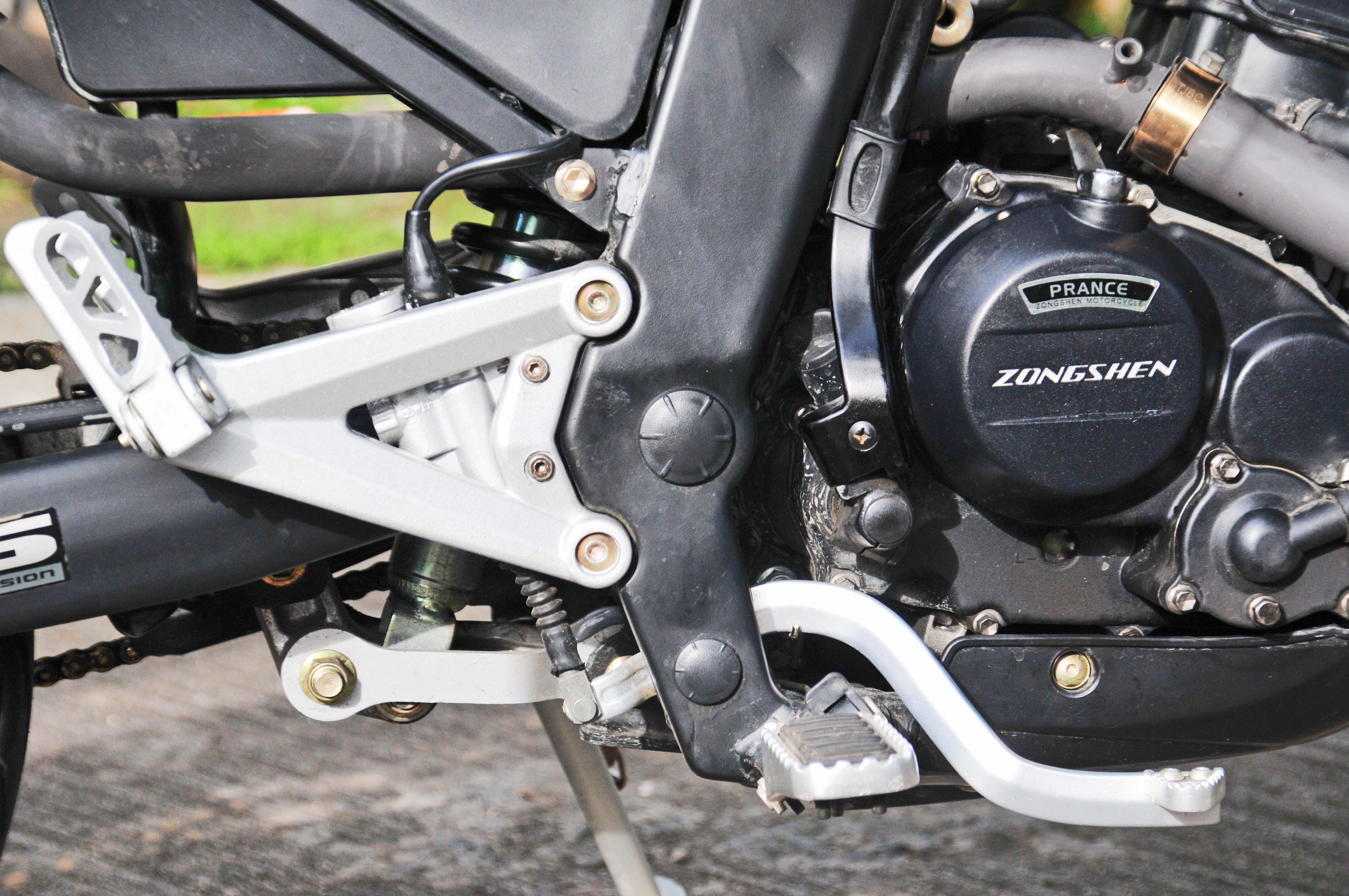 This article was published in InsideRACING’s  Volume 11 Number 9  2013 issue.The nice looking aluminum handlebar is wide and mounted high while  the foot pegs are set low for maximum legroom and upright riding position. The narrow motocross style seat is narrow letting an average rider to easily reach the ground with both feet while the thick deep foam makes it a comfortable perch. The aluminum shifters and the brake lever look very racy and easy to use while the non-slip serrated foot pegs are useful when standing up or when you go to a supermoto riding position. 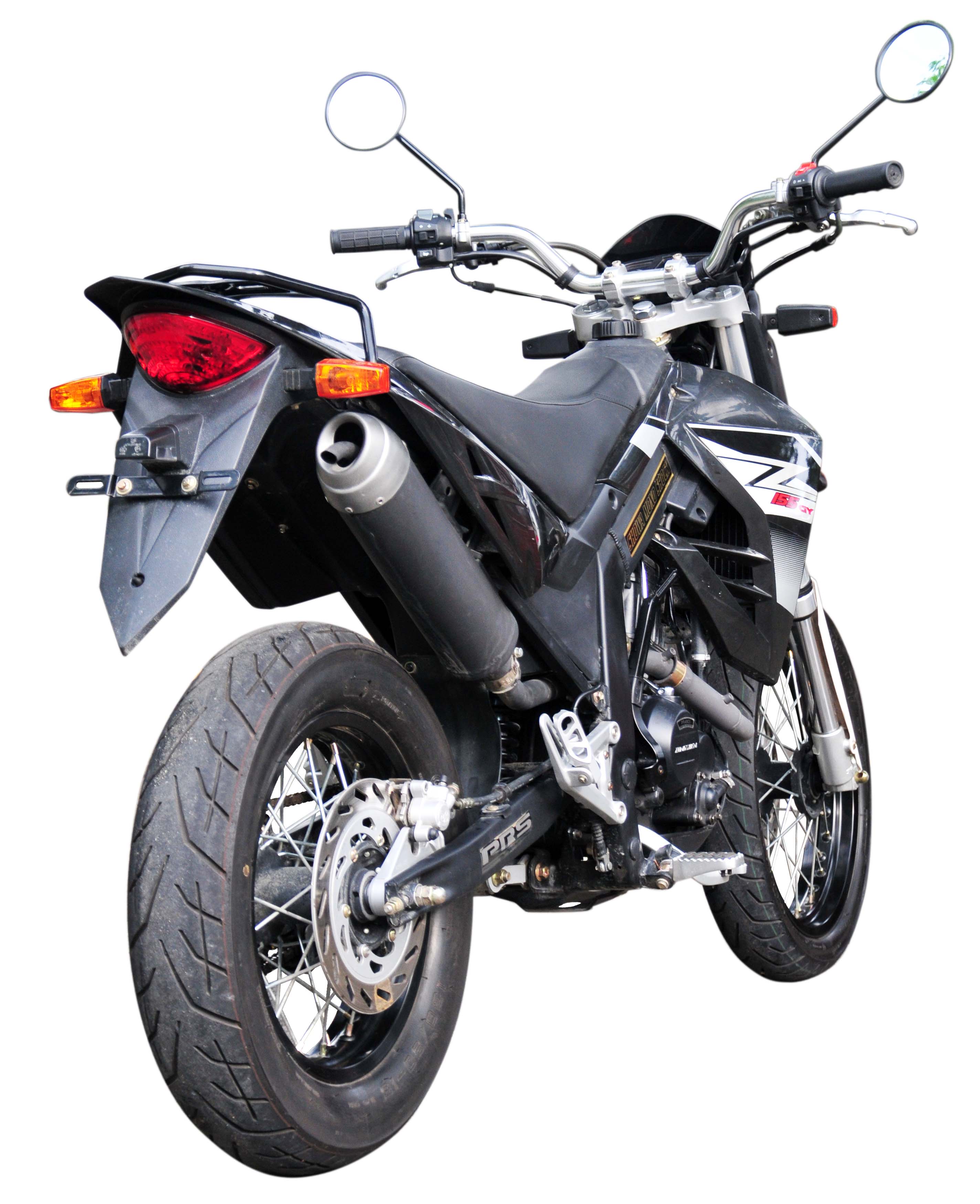 It is powered by a Zongshen designed and built 149.5cc single cylinder 4-stroke motor. It is claimed to produce 8.8 kw of power at 8500 rpm and a maximum of 10.0 nm of torque at a low 2500 rpm. An advance feature of this engine is liquid-cooling complete with a fan located on the left side of the radiator, just like in bigger bikes. It starts easily and revs quickly. Just like the IQ155 cruiser, this engine is not as smooth as Japanese bikes but is definitely much better than previous Motorstar engines that we tested. 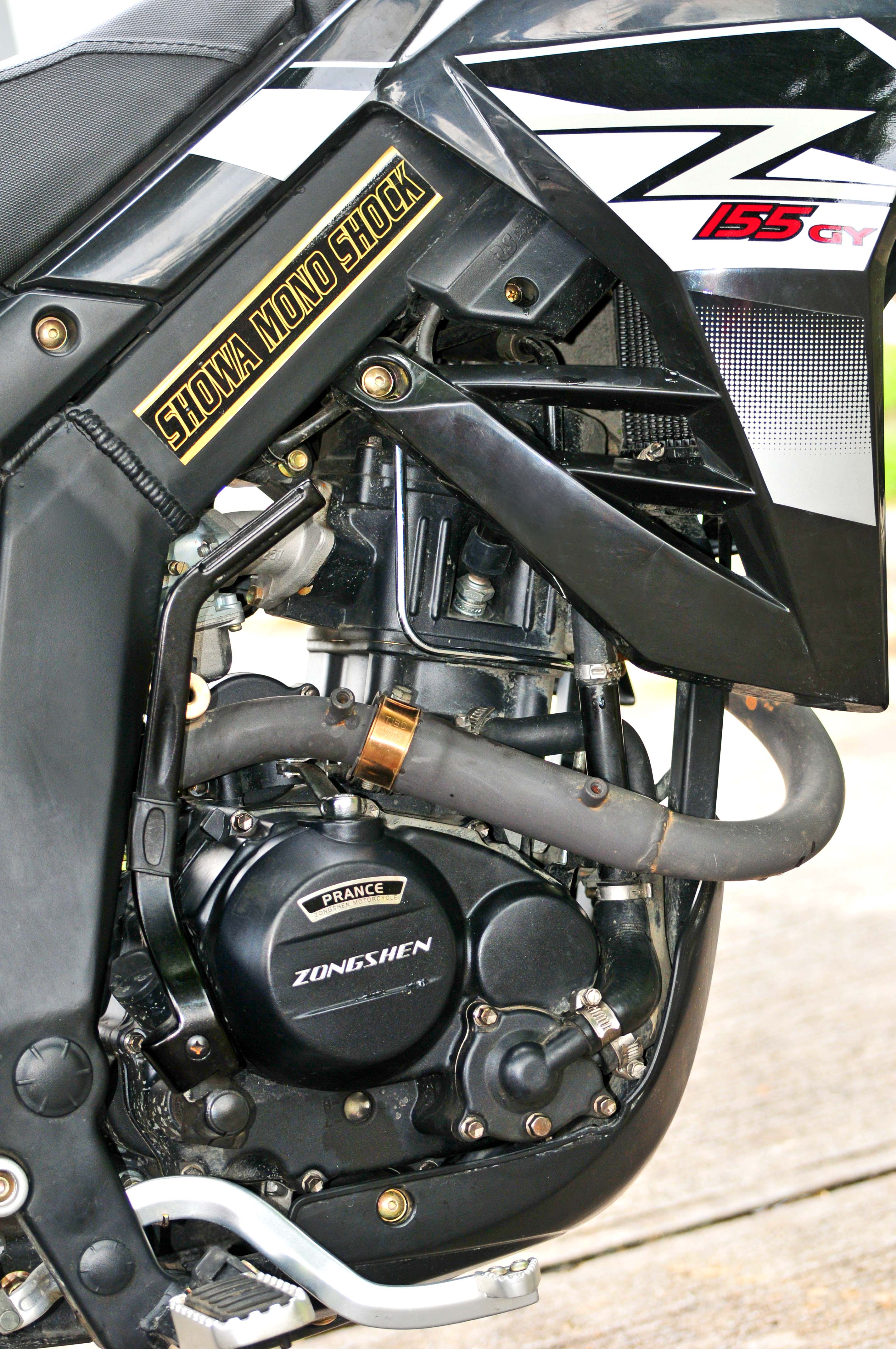 On the chassis side, the stand out during our test was how good the suspensions are, especially on the front. The graphics on the fork guards and frame may look cheap but the Showa connection is real . We were informed by Eastworld that the fork and shock were indeed developed by Showa since Zongshen is actually a supplier for other brands that use Showa components as well. The massive inverted fork not only looks good; its rigidity and long travel give a stable and planted front end feel even on rough surfaces which is good for rider confidence. Meanwhile, the rear shock which is adjustable for pre-load is slightly stiffer but again also delivers a compliant ride. 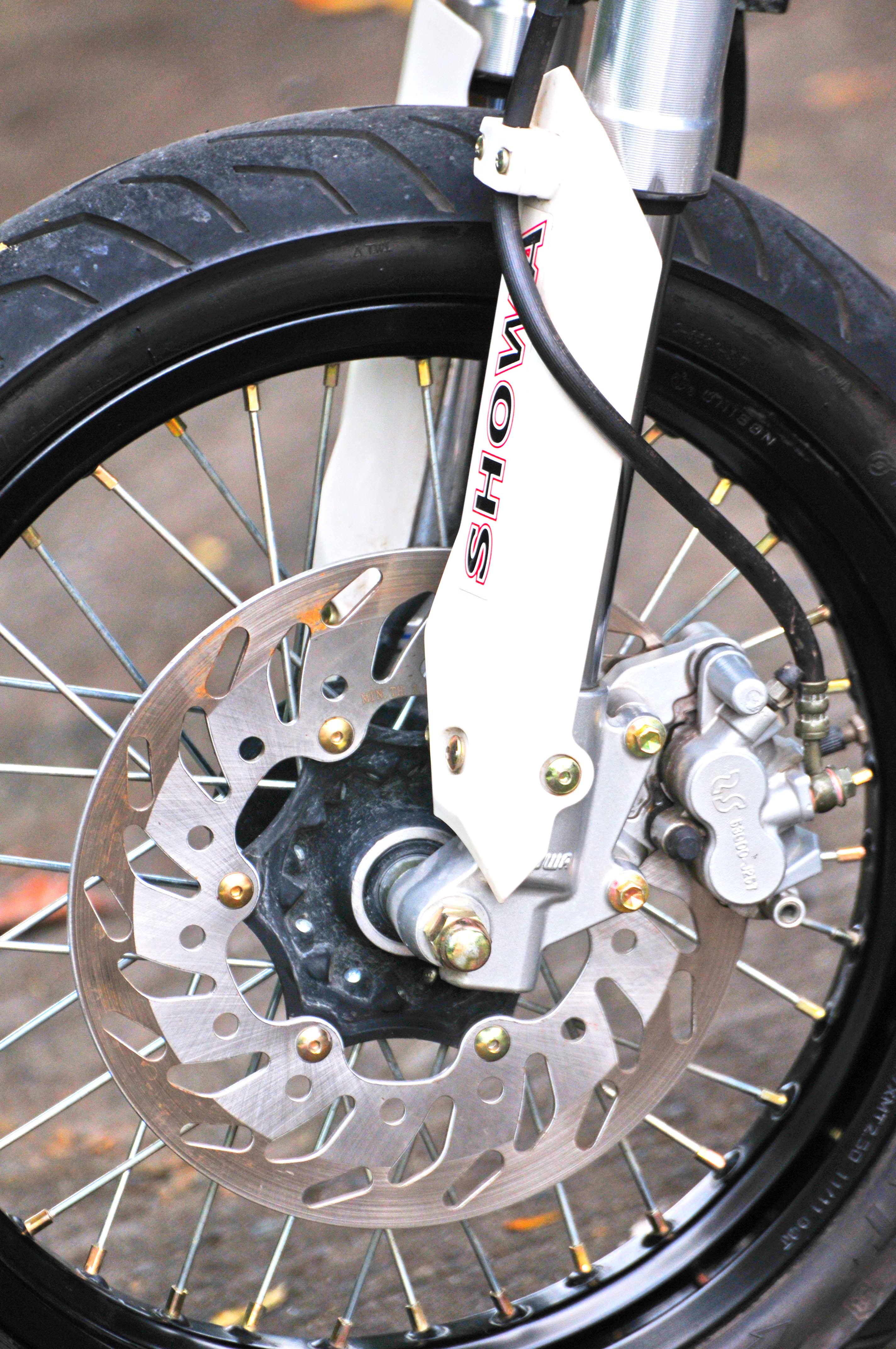 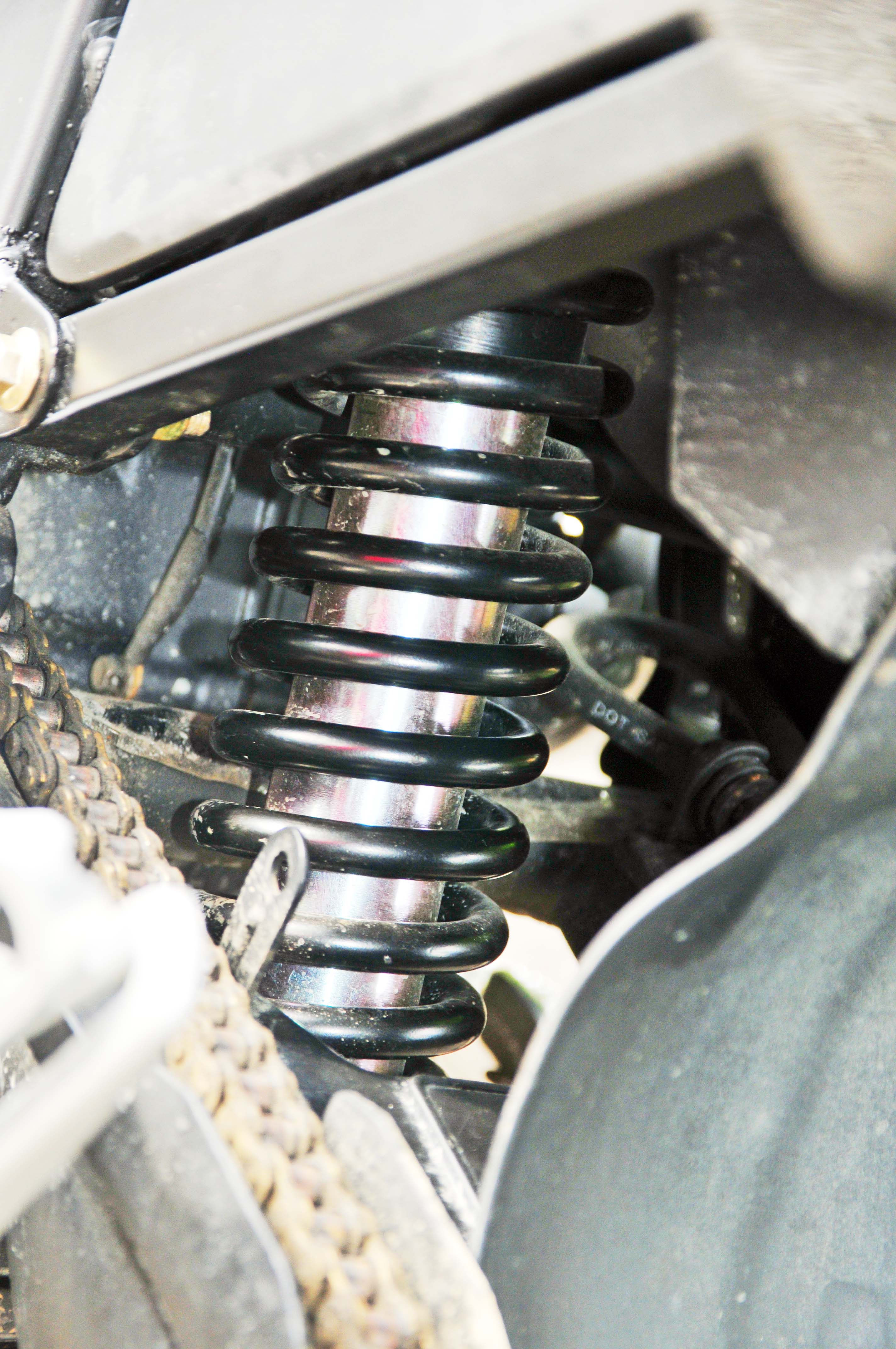 The single disk front brake is big and although the caliper uses only half of the total disk area, it delivers good stopping power. The rear brake is also massive and will let you slide the rear very easily in case you want to drift it.

The wide front and rear stock tires offer good grip but can be improved upon with better compound. The frame, engine, suspension and brakes can handle the additional grip if stickier tires are installed. You will notice the vibrations on long ride. Yes it’s less than those of the Xplorer 200 but they do reach the seat and the handle bars. Maybe heavier bar ends on the handle bars will help dampen the ones reaching your arms and some rubber mounts for the seats. 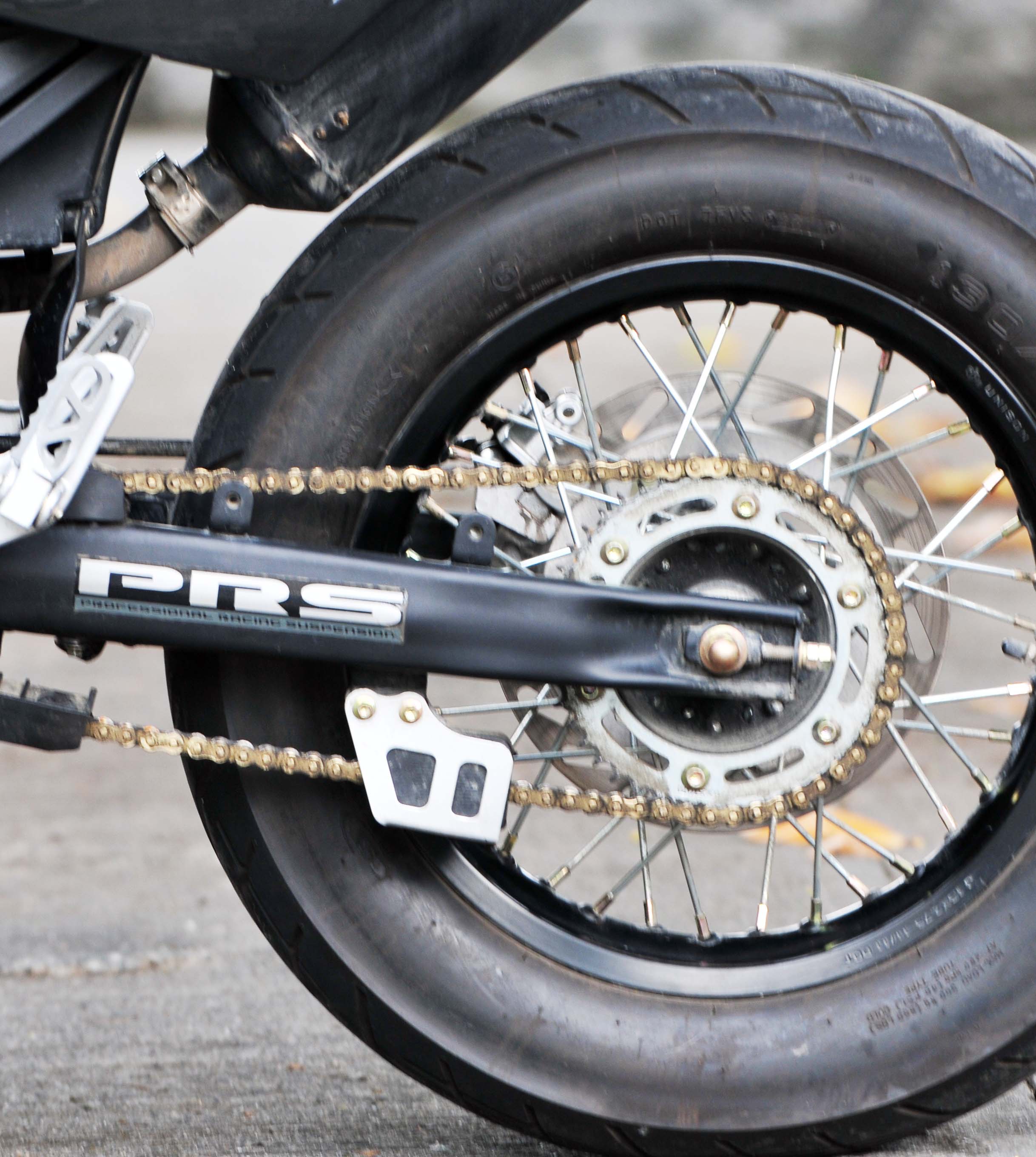 Handling-wise, in tight and slow situations, the Moto R155 is easy to ride. In repeated stop-and-go traffic, one can easily put both feet on the ground because of the low sitting position while the wide handle bar gives confidence. Once on the move the low pegs give good legroom, although it limits cornering clearance during hard cornering. This bike will give you good training if you have plans to upgrade to bigger bikes. 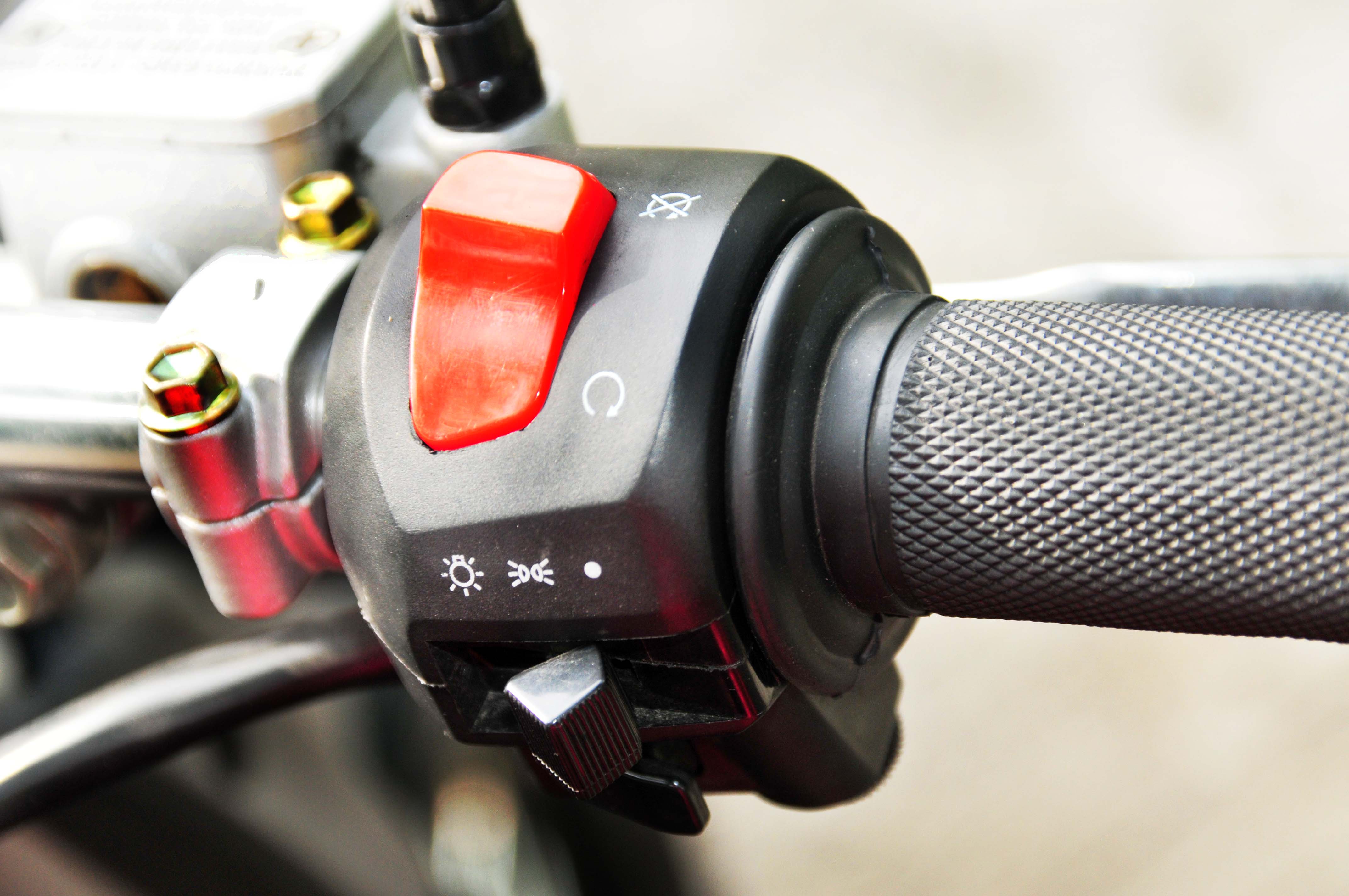 Overall, the Moto R155 is another attractive urban commuter with modern style and presence for a low price. Style and character are now also affordable. 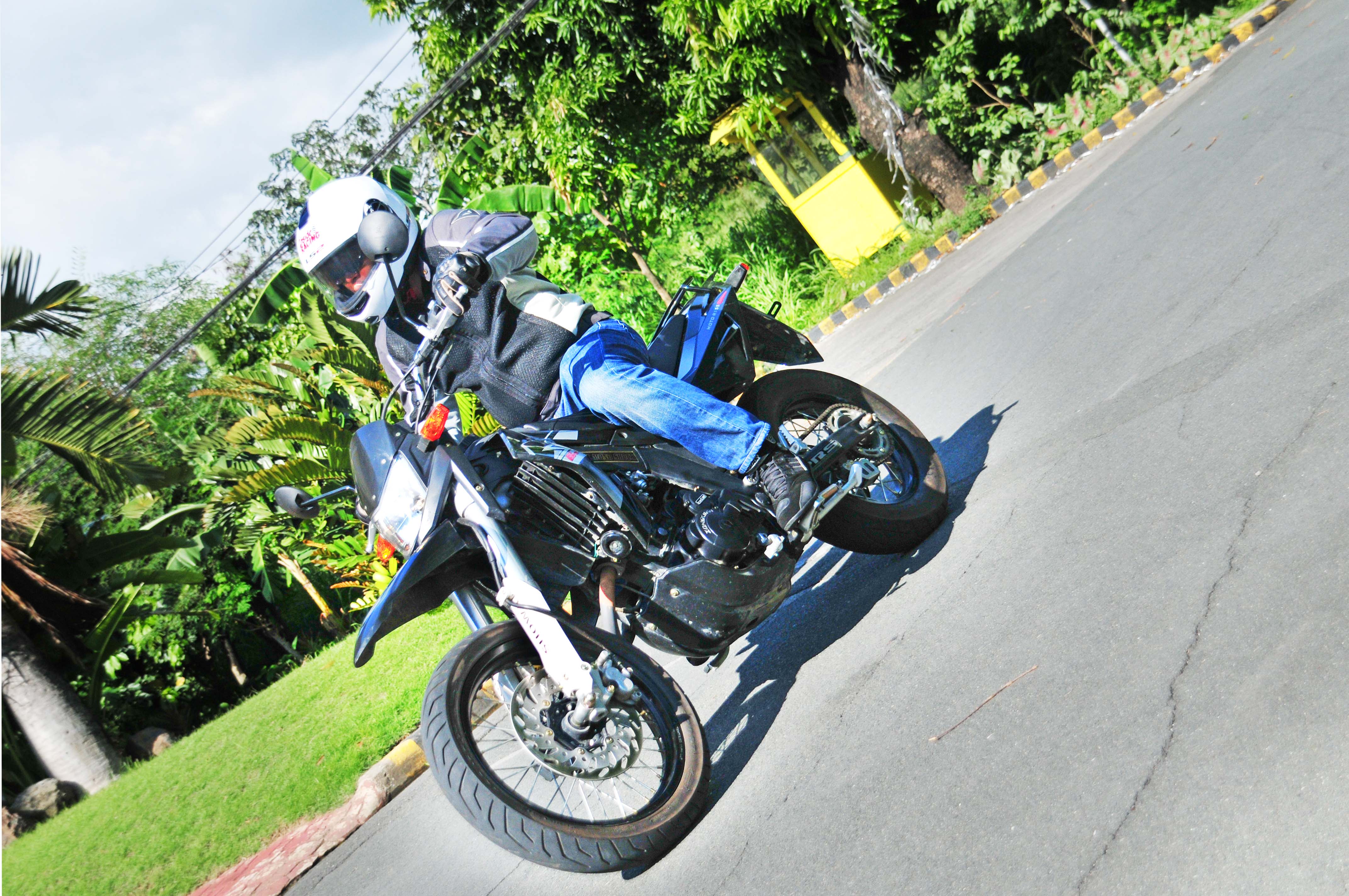 Al Camba: “For 155cc, it looks like a full size motorcycle! It has the upright sitting position, wide handlebars and a commanding view of the road that makes motard style bikes very popular as urban commuters. The Moto R155 is clearly meant to travel on mostly paved surfaces. It has proper road tires that are wide, although the 15-inch size rear limits tire choices if you want to replace it for full off-road use. Style-wise, I like the serrated foot pegs and beefy foot controls just like in real motards but I would immediately lose the various stickers and graphics. What impressed me most is the size of the Showa-developed front inverted fork which gives a confident and stable front-end feel. The mono shock rear also gives one of the best rides in this price range. The engine itself is impressive and pulls strongly. It is also liquid cooled complete with a radiator fan to further aid in cooling. The bike looks tall but the seat is narrow so I was surprised that I was able to put both my feet on the ground easily. Riding it was another revelation as it was good and comfortable around city streets while hustling traffic. On longer fast rides though, I feel it could benefit with a taller gearing as maximum revs are easily reached by the strong engine at its highest gear, making you wish there was another gear to go for a more relaxed fast ride. Its long wheelbase and relatively heavier weight than an underbone or a scooter required a little more effort to turn into the corners but these traits lend it stability on the fast parts of the ride. Modifications? I would suggest a few like steel braided brake lines, hand guards and a smaller rear sprocket and of course removing the stickers! For a Chinese-made bike the quality and refinement, though not yet at the level of Japanese brands, is better than before.” 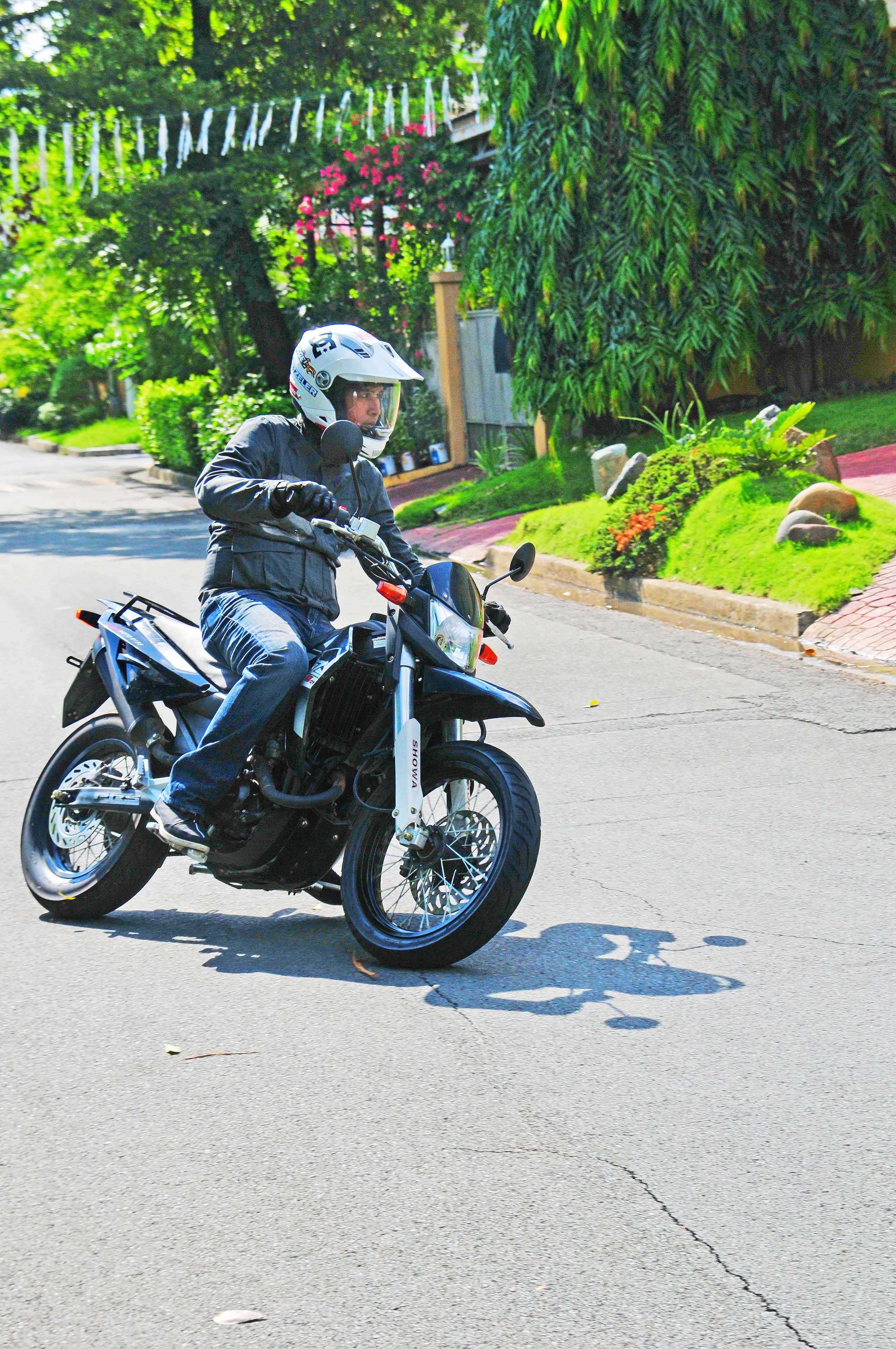 Philip Bonza: “This bike has a “macho” look and “bad guy” image like the ones you’ll likely see in a movie scene. Riding this bike made me feel uncomfortable initially upon sitting on it, but I was able to get that comfortable feel only after few minutes riding it. At first, the foot pegs were not in my preferred position, but I got comfortable because the handlebar’s position is perfect for my height and the ergonomic sweep fits to my sitting position. The bike is sporty due to the sporty tires, large brake rotors, short clutch and brake levers, and it has a big inverted Showa front suspension. The large brake rotors did not disappoint me on the expected stopping power. However, disappointing points are its top speed, the engine vibration and the close gear ratio. The front suspension is smooth and the stiffer rear gives it a nice overall ride. I find the bike to have a big steering radius so it is a little hard to maneuver in city traffic. The verdict, for its “porma”, power, performance and price, I score 3 stars.” 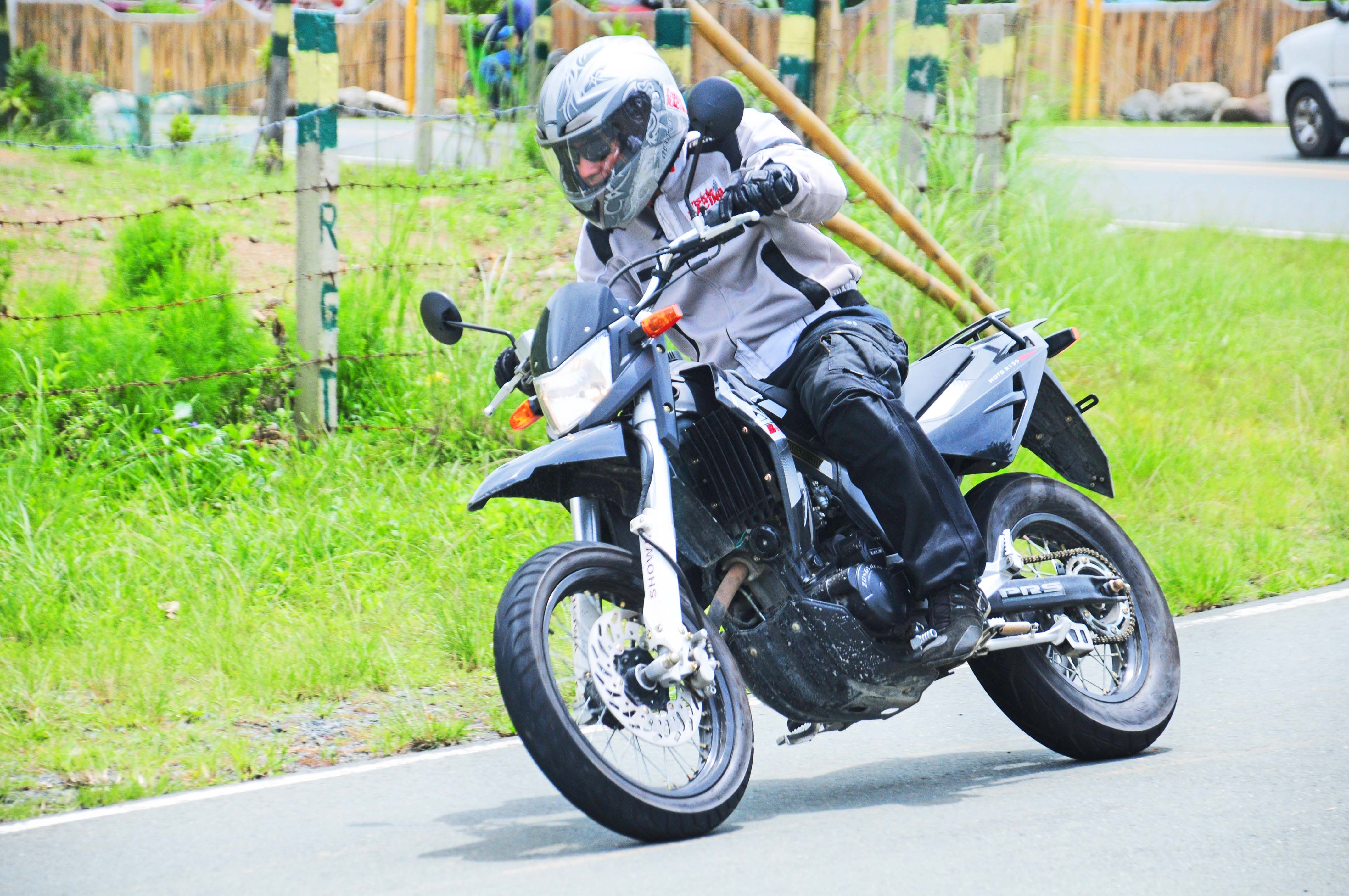 Ricci Abrina: “The 42 mm inverted SHOWA front fork, front and rear big disc brakes, water cooled 149.5cc engine, nice aluminum trimmings (levers, foot pegs for rider and pillion and side stand), and the fat street tires are what you’ll notice and drool over in the Moto R155. I like the close ratio gearing but I feel it lacks a 6th speed or overdrive. They can also improve on the vibration after 80kph. The smoothness of the shifting needs improvement as well. For overall design, I’d rate it at B+ for this motard bike. Did I mention the Showa suspension is superb?”

*This article was published in InsideRACING’s  Volume 10 Number 7 2012 issue. 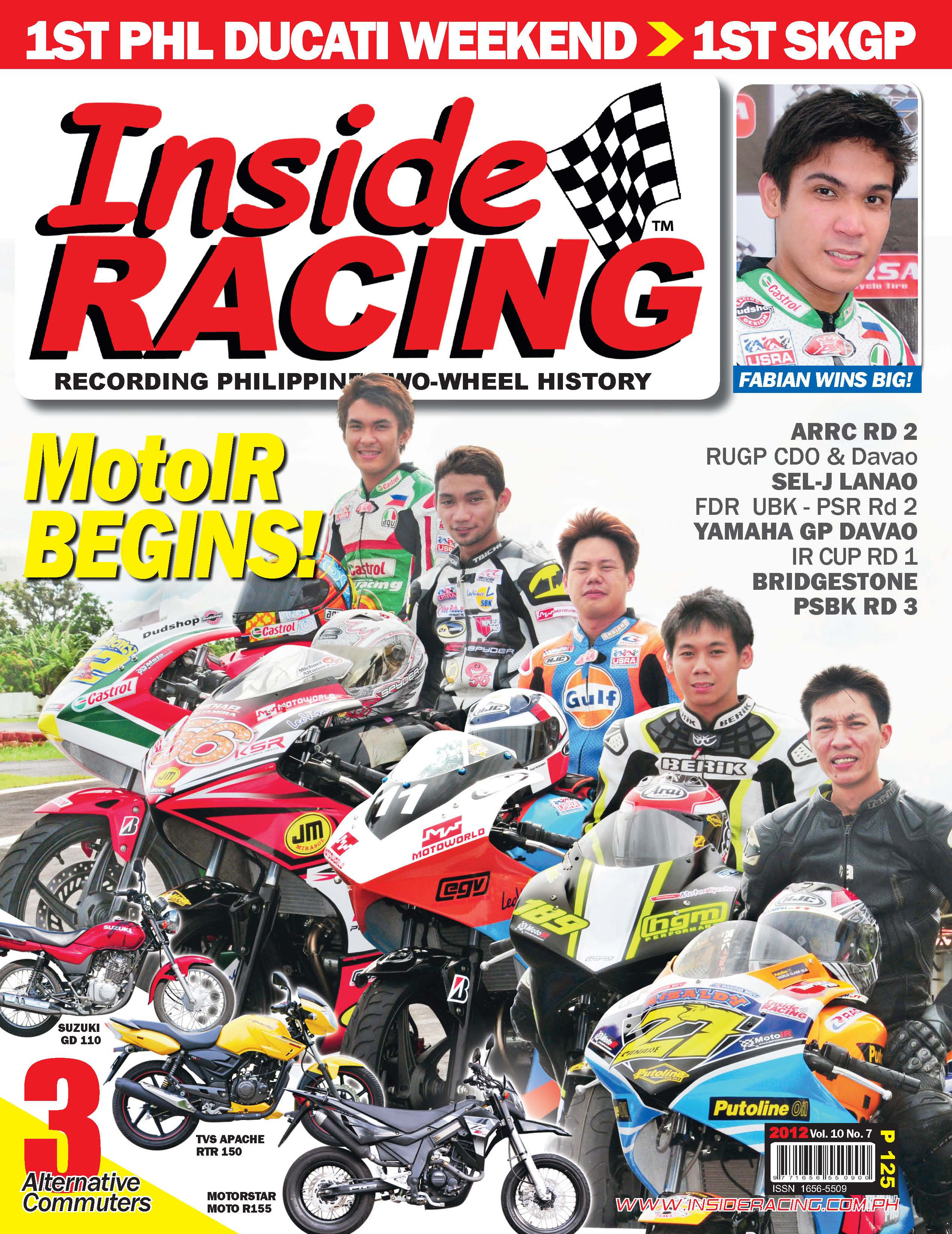