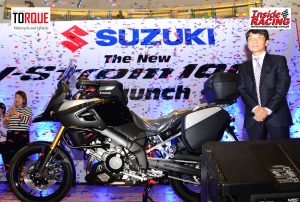 Wheeltek Motor Sales Coporation is Suzuki’s partner in selling big-bikes in the Philippines and its Vice President for Sales and Marketing Mr. Roscoe Odulio was also present. 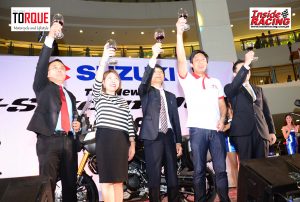 “Tonight is a very special night as we will provide the Philippine market with Suzuki’s most powerful adventure bike! The ultimate touring machine for every road!” said Mr. Suzuki.

“ Inspired by Suzuki’s first ever big on/off road bike, the 1988 DR-BIG, the distinctively beak like cowling shows how far the V-Strom 1000 ABS is bound to soar. Sharing the spirit of the globally successful V-Strom 650 ABS, the all-new, V-Strom 1000 ABS will deliver fun, excitement and versatility to the open class rider who seeks a new world of motorcycling adventure. Built around a 1037 cc, 4-stroke, liquid-cooled, DOHC, 90° V-twin engine which is paired with a six speed transmission. The V-Strom 1000 ABS gives ample power and effortless performance of a big bike while rider enjoys a comfortable ride with great maneuverability,” explained Ms Odessa Gan, Marketing Manager for Suzuki Philippines.

The event was witnessed by the big bike community as well as various Suzuki owners club who were invited to participate in the grand unveiling. Right after the unveiling the big group of audience was surprised with the raffle of 1 new Suzuki underbone motorcycle 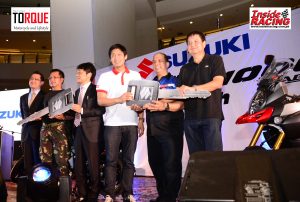 After the bike was unveiled the first two owners got their keys to the bikes on stage. The lucky new Suzuki V-Strom 1000 owners were Mr. Raymond Gaston from Bacolod Thunderbugs motorcycle club and Mr. Ernie Dizon from Mapua Riders Club.

Watch out for a full report and more pictures in TORQUE and InsideRACING magazine. 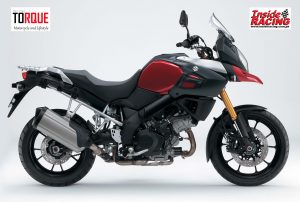