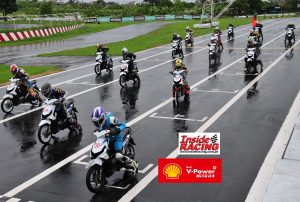 Mckinley Kyle Paz and Hajime Tadachi led the winners of the Honda BeAT race classes last September 17 at the Carmona Race Track during the One Make Race Festival presented by Shell V-Power Nitro+ and organized by InsideRACING.

The Honda BeAT Fun Class for Novice and Beginner riders featured 26 participants who went through eliminations and it was McKinley Kyle Paz who dominated the race. Young riders Amber Torres and Gian Carlo Mauricio also went up the podium as they finished second and third respectively.

In the Honda BeAT Elite Class for Intermediate and Expert riders, it was Hajime Tadachi who came out victorious after battling out with other well-known riders. Gerald Cruz finished second while the third place went to Paul Mark Doblada.

The Honda BeAT races were part of the first Shell V-Power Nitro+ One IR Make Race Festival organized by InsideRACING in cooperation with Honda Philippines. It was sanctioned by the Unified Sports and Racing Association (USRA) for Motorcycles, Inc.
More detailed reports and photos to follow in InsideRACING magazine.