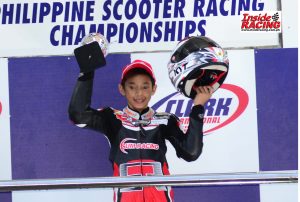 It was indeed a big year for 13-year-old McKinley Kyle Paz as aside from winning an international race held in Japan recently and clinching the 130cc overall champion in the FDR Philippine Scooter Racing Championships, the young rider also bagged the title in the MTRT 115cc Scooter class.

Paz who hails from Taytay, Rizal dominated the final race held at the west course of the Clark International Speedway last October 5. The young rider had a total of four wins out of 6 rounds.  Raseson Francis Angeles and Amber Torres placed second and third in the final round.

The MTRT race classes were organized by MTRT Philippines Mr. Henson Hu and part of the 2014 Philippine Petronas Motorsports Championships and aims to give more track experience to new riders and hone their riding skills while enjoying the camaraderie in motorcycle racing.

It was sanctioned by the Unified Sports and Racing Association (USRA) for Motorcycles, Inc.  and the champions will be awarded at the prestigious Golden Wheel Awards in 2015.