Quartararo Crowned the New King of the Sachsenring

Monster Energy Yamaha MotoGP’s Fabio Quartararo was unbeatable at the Motorrad Grand Prix Deutschland. He showed incredible physical and mental strength in difficult conditions to take a brilliant win, his first on German soil. Racing in hot conditions at the Sachsenring is notoriously difficult, but Franco Morbidelli used his experience to make lemons into lemonade. Despite starting from P20 and the heat causing problems with tire pressure, he finished in 13th place. 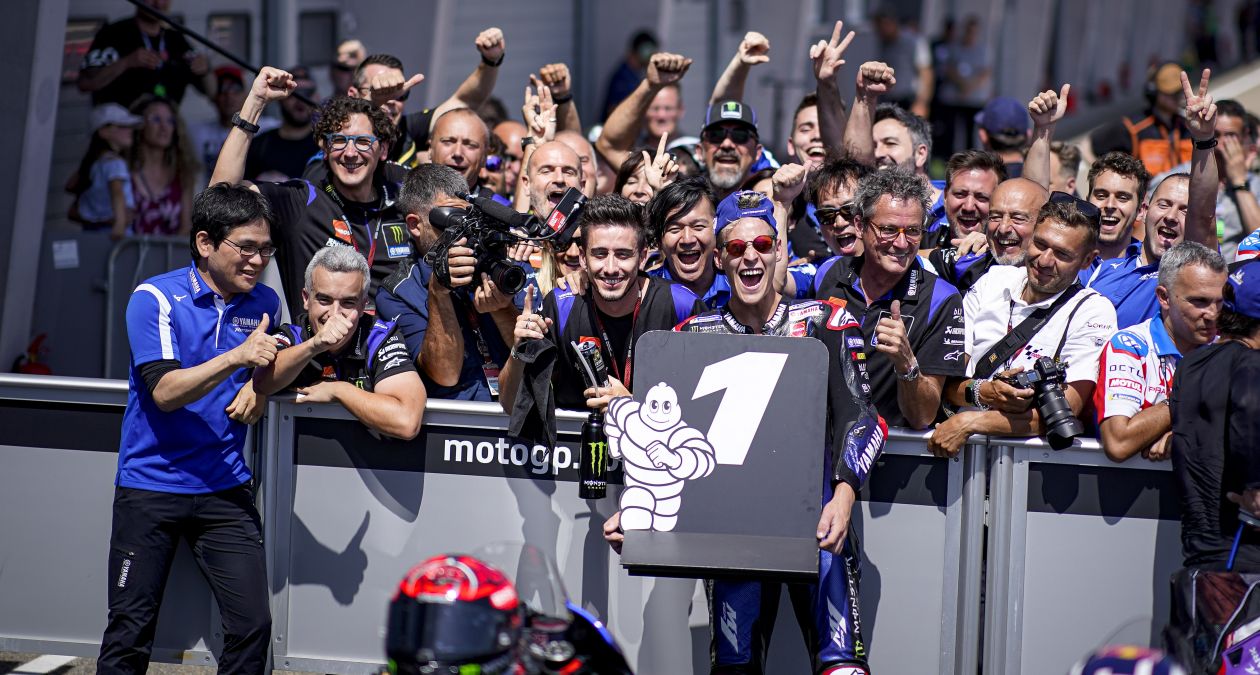 Quartararo replicated his strategy from the Catalan GP to perfection. He had a rocket launch from P2 to take the holeshot ahead of Francesco Bagnaia. The Yamaha man had a blistering pace and tried to break away, challenging the Ducati rider to keep up. On lap 4 Bagnaia crashed out in Turn 1, leaving an over 1.1s gap between number 20 and his closest pursuer. El Diablo was in the clear. 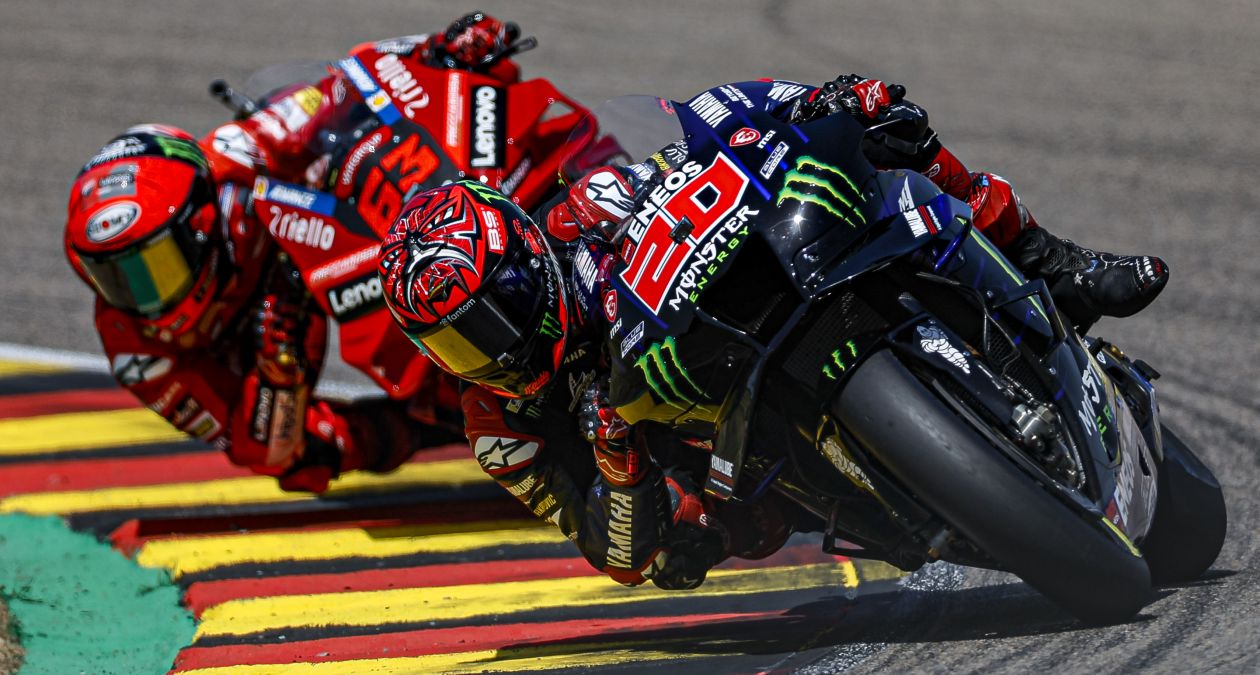 There were 26 more scorching hot laps to go at the tricky Sachsenring circuit. In theory a real challenge for the recovering Frenchman, who had caught a flue earlier in the weekend. However, he managed to maintain his unbelievable lap times. He kept his concentration and speeded towards a brilliant win, with a 4.939s advantage. It’s his third victory and sixth podium of the season. 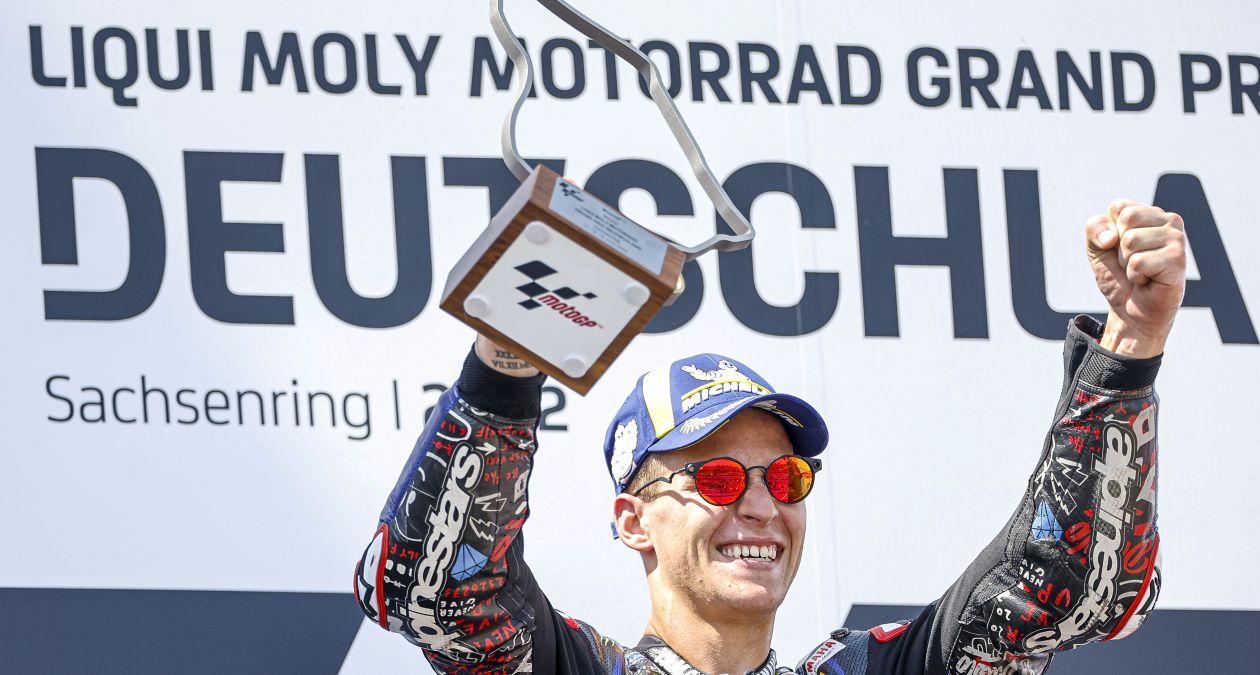 Morbidelli started from P20 on the grid and navigated the opening lap well to close the first lap in 17th place. With the first 5 laps causing some casualties, he moved up to 15th. He was all over the back of Andrea Dovizioso’s bike and overtook him on lap 15. 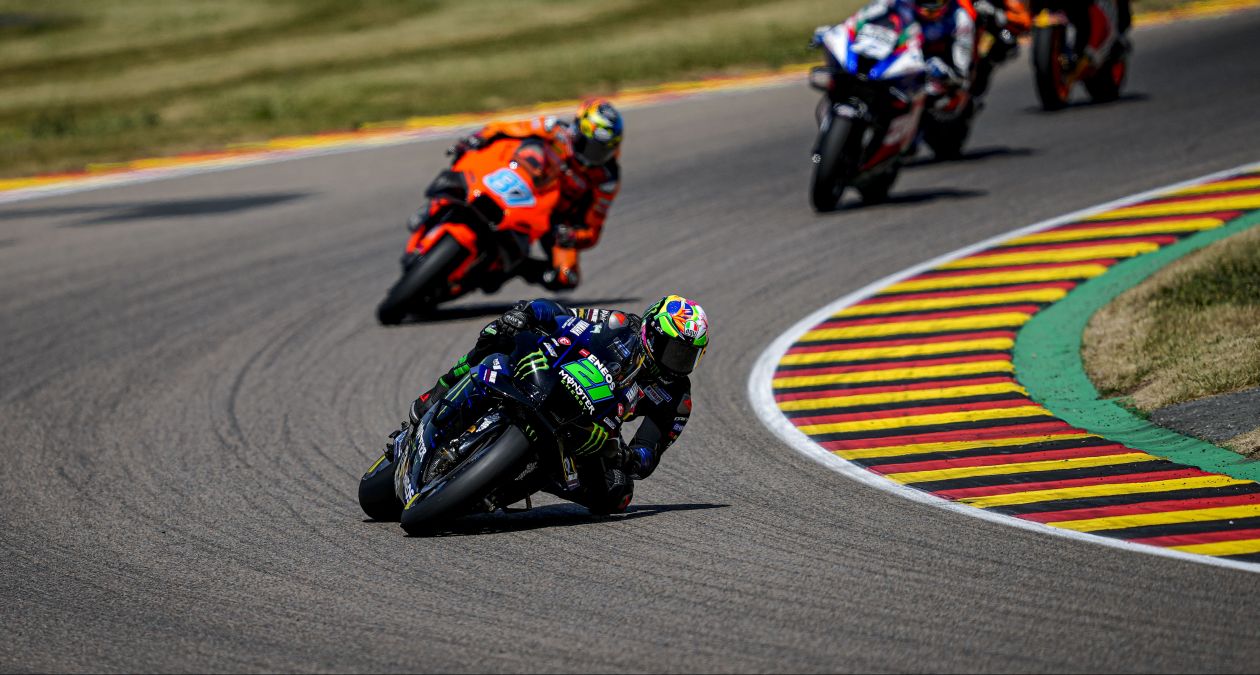 As the heat was becoming more and more unbearable, the number-21 rider passed Dovizioso, and Maverick Viñales and Pol Espargaró retired from the race due to a technical issue. The Yamaha man was up to 12th place but came under pressure from Raul Fernandez, who he had to let through on lap 24. He then focused on completing the race, holding his position and crossed the line in 13th, with a 29.014s gap to first. 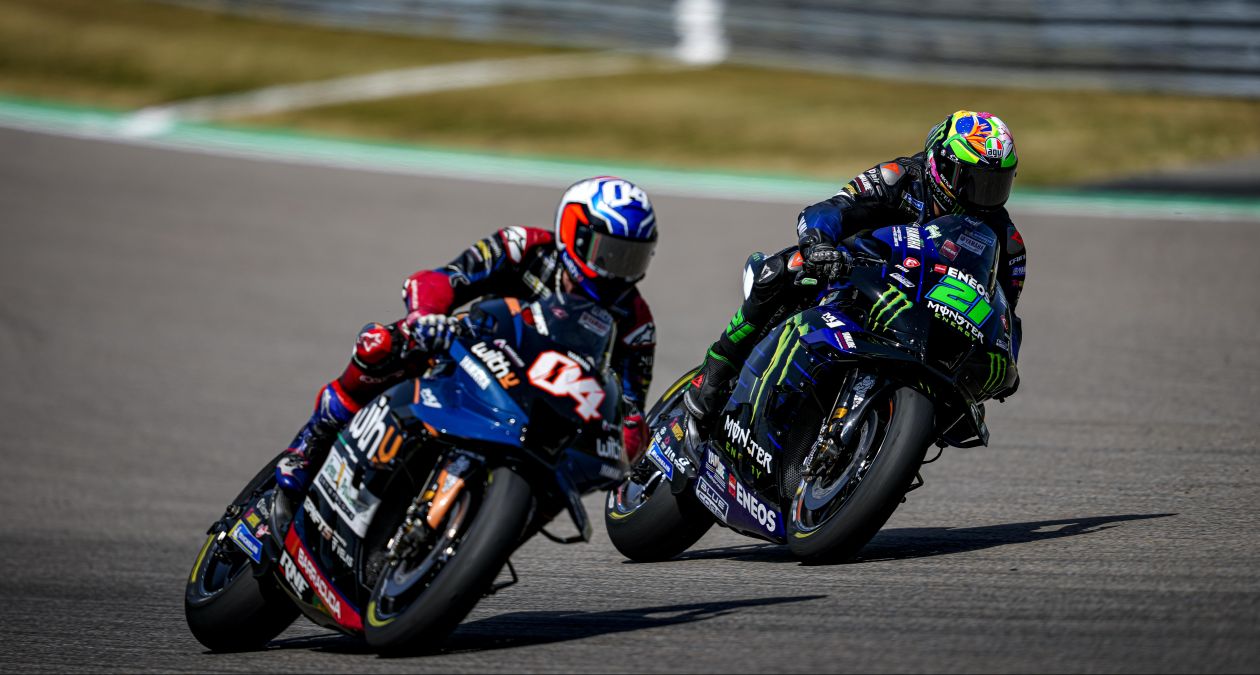 The results see Quartararo extend his lead in the championship standings to 34 points, with a 172 points total, while Morbidelli remains in 19th with now 25 points. After Round 10, Yamaha stay in second place with 172 points in the Constructor championship, and Monster Energy Yamaha MotoGP moves up to first position with 197 points in the Team championship. 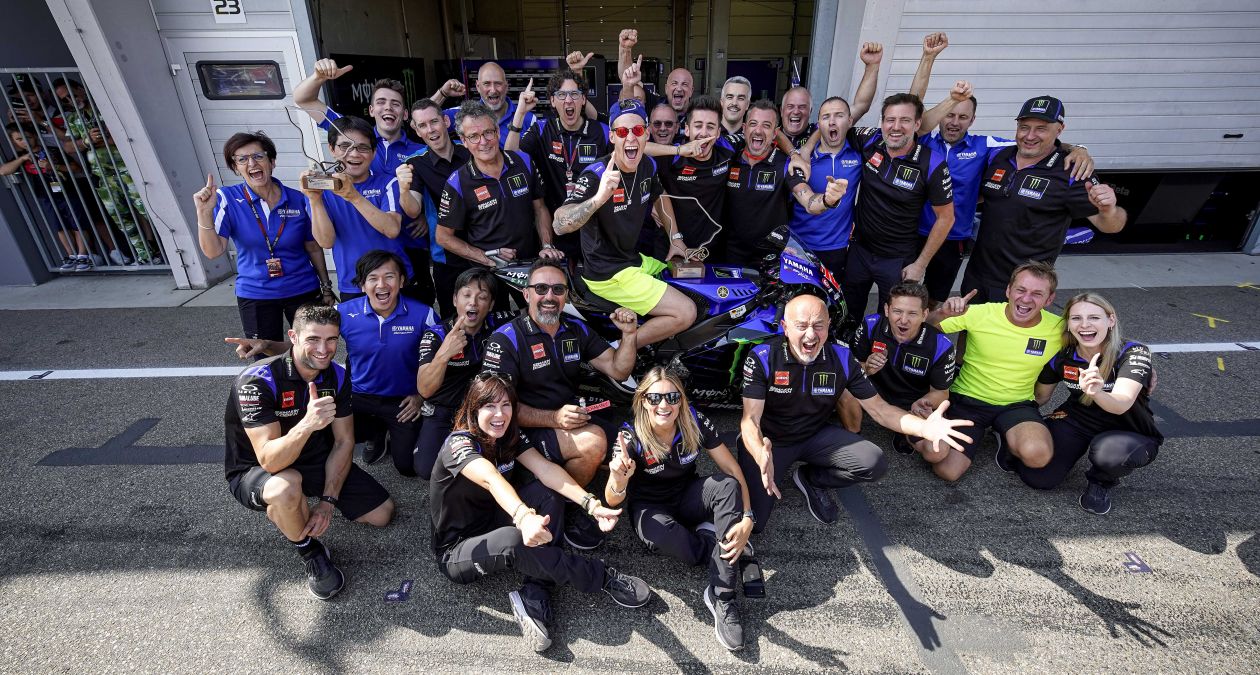 The team will be back in action next week at the TT Assen in the Netherlands, held from 24-26 June.

Massimo Meregalli (Team Director): “This is another superb win for us with Fabio! This time we did it at a circuit where in the last few years we were not able to win, and Fabio wasn’t even feeling 100% fit. The manner in which he controlled the race shows what he is capable of. He put his rivals under pressure to keep up at the start, and that paid off. The team did a great job! As for Franky, he was far down the grid, and at the Sachsenring it’s very difficult to overtake, so we knew this race was going to be difficult for him. To start from 20th place and end it with some championship points is really not that bad. It’s clear that we need to make sure his qualifying improves for the other races. We have one more round to go before the summer break. We are highly motivated to give it our all in Assen next week.” 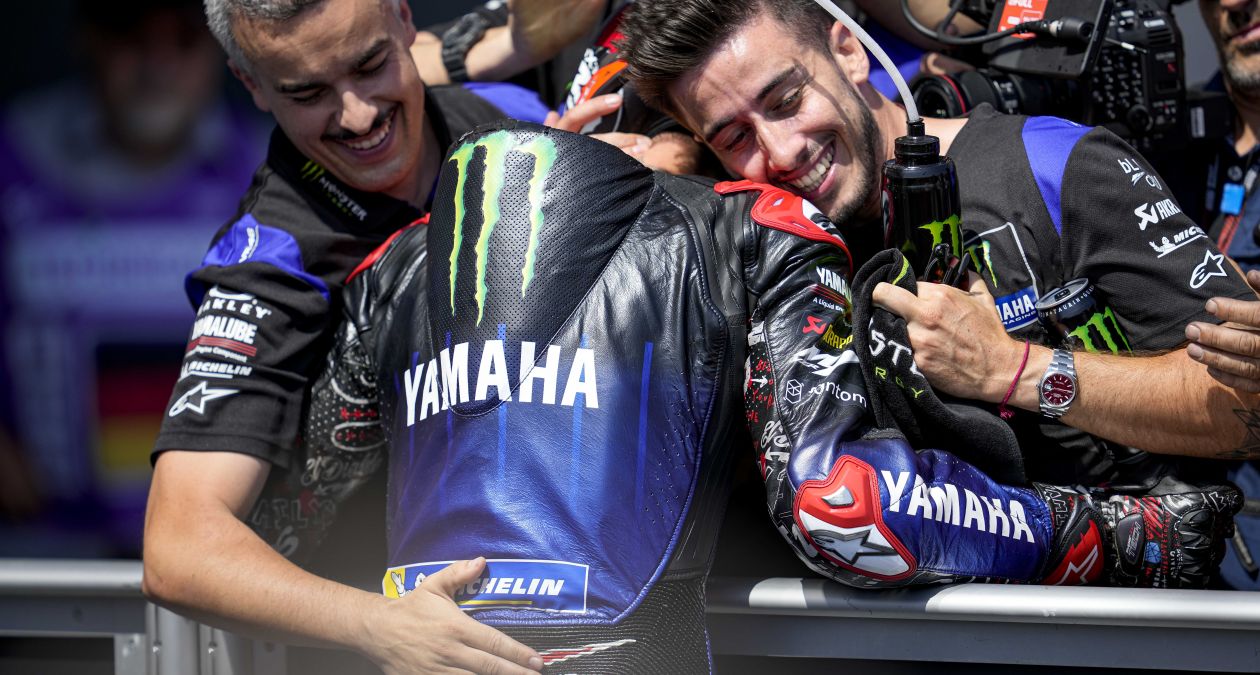 Fabio Quartararo: “I felt ill the entire weekend, but the most important thing is that we finished it in a good way. I was super consistent throughout the race, first controlling the gap to Johann, and then finishing the race by a big distance is okay. It’s a step forward for our confidence in the race. It was 30 laps, I couldn’t make a mistake, and I had to control the pace and the rear tire. It was a great race in many ways!”

Franco Morbidelli: “We made some good improvements this weekend, but still the qualifying was the thing that ruined our race. In the race I was able to make up some positions. But being in a group with these temperatures, it’s difficult to overtake and make up many positions. Anyway, I was close to the fight for the top 10, which at the moment is a good result for us. First of all, we need to reach our first top 10, and we need to build up from there.”