The Monster Energy Yamaha MotoGP riders have done the team proud again under the Losail floodlights. Fabio Quartararo had a stunning ride from eighth in the early stages of the Grand Prix of Doha to a victory with a 1.457s lead. Maverick Viñales was also in the run for a podium position. A small evasive action in the final stages had him just miss out on a podium by 0.6s, but he scored 11 solid points with his fifth place.

The Monster Energy Yamaha MotoGP team proved to be unbeatable at the Losail International Circuit in 2021. Following Maverick Viñales’ victory at the Grand Prix of Qatar one week ago, Fabio Quartararo brought home the win in the tense Grand Prix of Doha battle, with Viñales finishing in fifth. 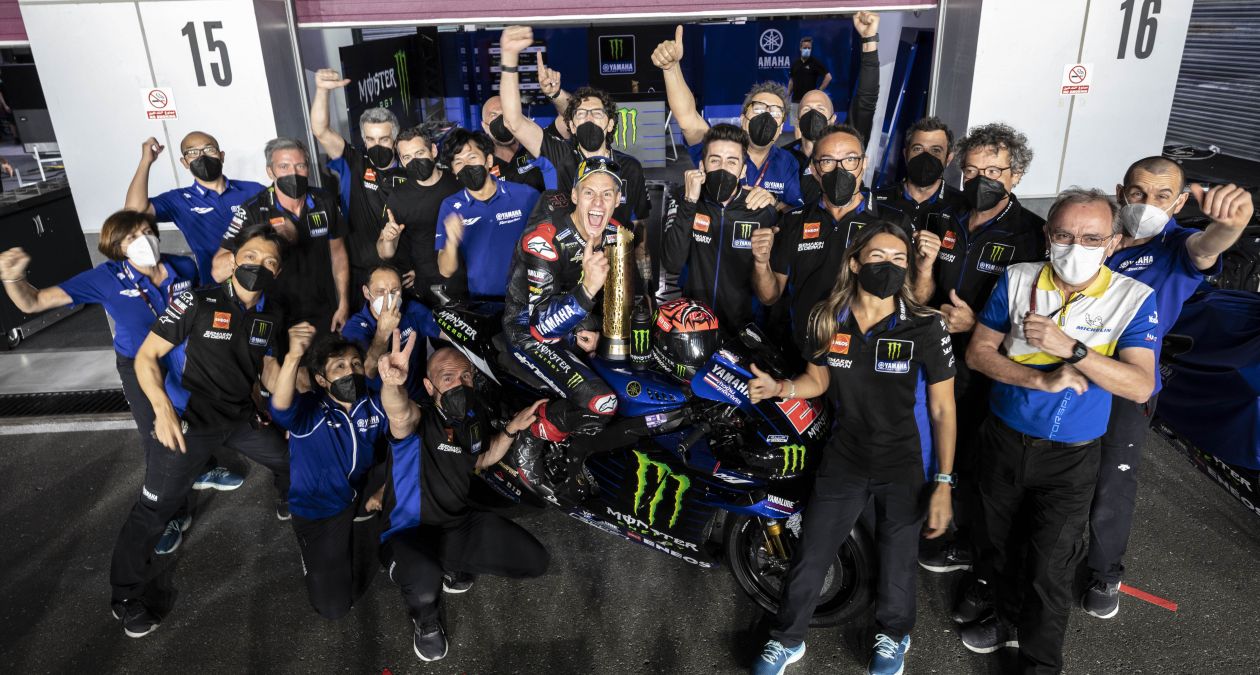 Quartararo started from P5, and after the usual opening laps’ hustle, he found himself in ninth position, ahead of his teammate. But the youngster remained calm, trusting in the consistency of his race pace. He managed his tires beautifully, until he found the right moment to pounce.

By the midway stage, the Yamaha man started to move through the order again. The number-20 rider smoothly moved up to fifth with nine laps to go. He soon also overtook Alex Rins and was sniffing a podium. He wasn’t having any of Rins’ advances and whilst defending his place, he reeled in leading duo. 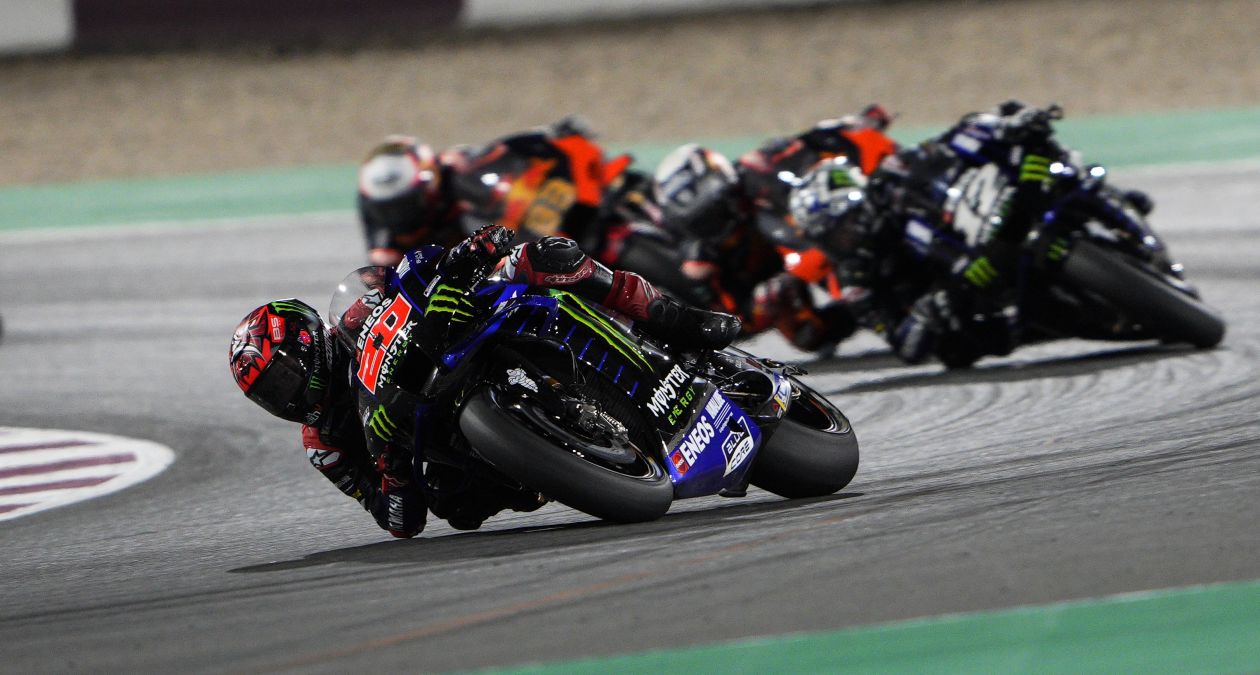 With five laps to go, he skillfully overtook Johann Zarco and needed only a couple more corners to take the lead from Jorge Martin. Though he was briefly overtaken due to slipstream, the Frenchman relentlessly attacked again, making the most of his Yamaha’s corner speed. This time he made it stick and checked out. He put the hammer down and faultlessly rode to his first win of the season, taking it with a 1.457s lead.

Viñales commenced the race from third place on the grid and settled into ninth at the end of the first lap. Similar to last week, he spent the majority of the race stalking his teammate, saving tyres at the start and going in attack-mode in the decisive stage. 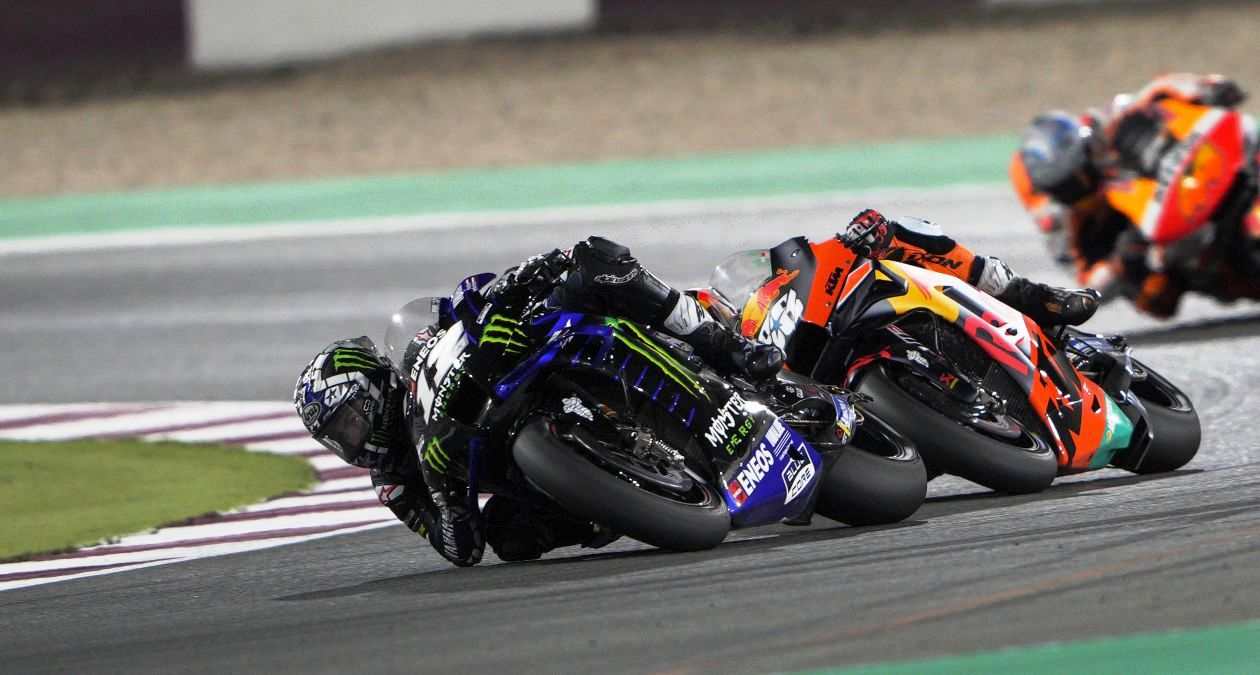 Mistakes from Joan Mir, Aleix Espargaró, and Francesco Bagnaia moved him up to sixth place on lap 16. It was the Yamaha man’s cue to start pushing. This was the moment that the earlier tire management paid off.

Having recovered to fourth place with three laps to go, Viñales was in with a shout for a podium. He was putting Zarco and Martin under serious pressure. However, two laps before the end the number-12 rider had to avoid a collision in the last corner and went wide. It cost him a position and ended his challenge for the top 3. He finished the race in fifth place, 2.110s from first.

The results put Quartararo and Viñales in second and third place in the championship standings, both with a 36 points total. Yamaha and the Monster Energy Yamaha MotoGP team remain in first place with a 50 and 72 points total respectively after Round 2.

The MotoGP paddock will travel to Portugal next for the third round of the 2021 MotoGP season, the Grande Prémio de Portugal, to be held at the Autódromo Internacional do Algarve from 16th-18th April, 2021.

Massimo Meregalli (Team Director): “The race was very difficult to predict. The second race at the same circuit is always more challenging, because everybody is faster. We had a very promising FP4, but the tire degradation remained a big question mark. We knew the start would be tricky and that in the end it would all come down to tire management. Our riders had to be patient in the beginning and then be brave and try to win the race. The riders did exactly that. In a way this race was a carbon copy of last week for us. Fabio rode in a fabulous way! He chose the perfect moment to make his move to the front, and the lap times he put in to pull away from the group were phenomenal. Maverick also came very close to taking a place on the podium. Two laps before the end, to avoid another rider, he ran wide in the last corner. It’s a shame that he didn’t have enough time left to close the gap again, but fifth place is still a good result after such a hard race. All in all, it’s been a really great start to the season for our team. These two victories are the best reward for our team members after 35 days of staying here in Qatar. A big ‘thank you’ to all the people who contributed to the achievement of this double win.” 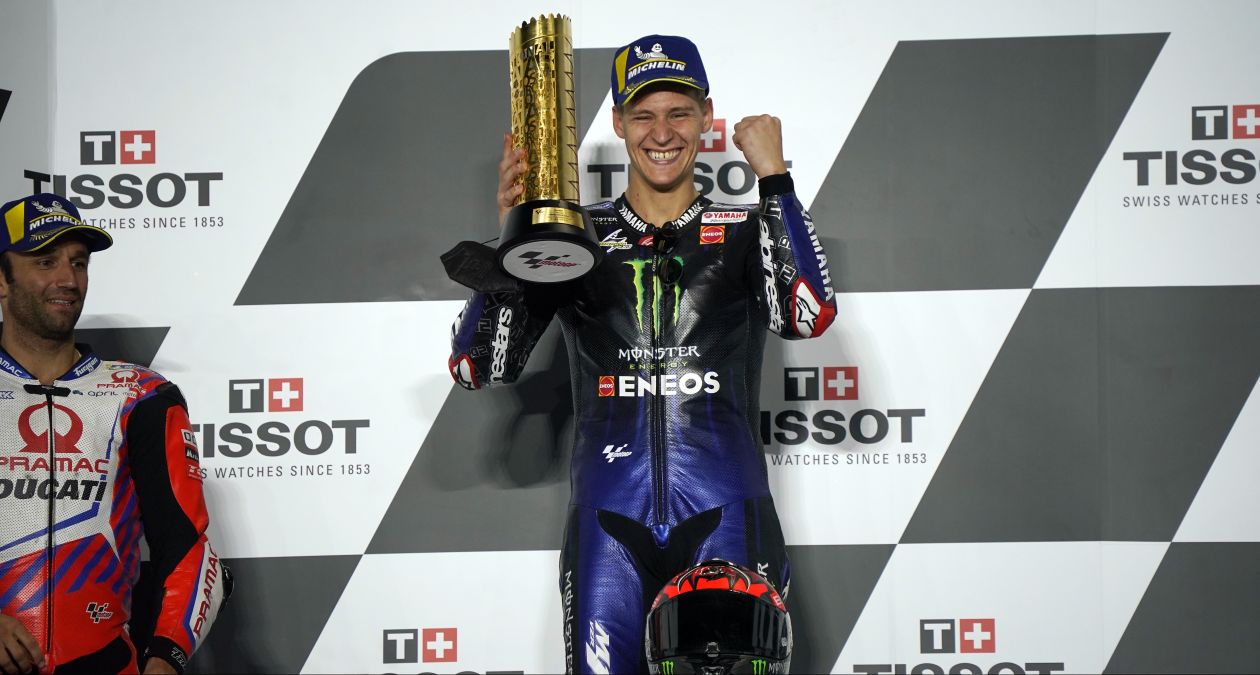 Fabio Quartararo: “I have no words. This race win is different from the previous three MotoGP races I’ve won so far. After the last race I was a bit disappointed in myself. During this race it was totally different. I was thinking so well, I played a lot with the map and the tires. Nine or ten laps to the end I thought ‘Right now is the moment to push and show our potential’. It’s great to finish in first position! I was so happy with FP4, because I felt like I was the only rider to do only high 1’54s laps. So we made a plan, but the team also told me to play it by feeling, and I did that really well. I was feeling so good. When I overtook Zarco, I also immediately overtook Martin. I was so scared when I hit the debris on track. I thought ‘Not a puncture, please!’, because it made a bad sound. My last lap didn’t feel as fast as the earlier ones, but it was enough for the win. Singing the French anthem with Zarco today was the best moment I ever had.” 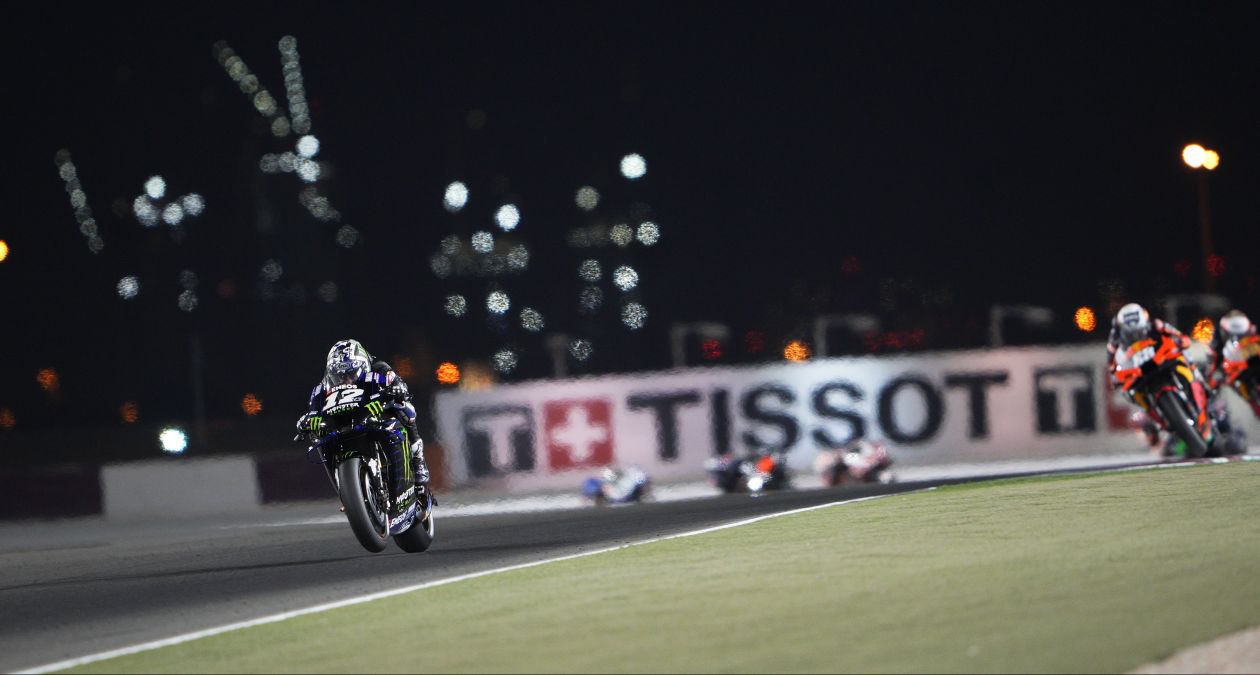 Maverick Viñales: “For sure, the race didn’t go as we expected, but I’m still quite happy, because in the end this is a positive result. I was managing the tires a lot at the beginning so I could be stronger at the end. It paid off, because at the end I was very strong, especially the rear grip was good. I just wish we would have had five more laps. We will try to come back stronger. I know we have to improve some areas, mainly my riding style. The most important thing is that the bike has great potential, and we demonstrated this in the last ten laps. I was trying to overtake and be stronger every lap. We tried, and overall I felt it was a positive day, even if the results didn’t show our true potential for Qatar Race 2. Still, I think fifth is a nice result, and I fought back with all that I had.”