Monster Energy Yamaha MotoGP‘s Fabio Quartararo fought like a lion to take a brilliant second place at the Gran Premio d’Italia Oakley. The result extends his championship lead by 4 points to 8 points in total. Franco Morbidelli also showed fighting spirit in his and the team‘s home race. Completing the opening lap in 24th place, he clawed his way up the ranks to finish in 17th. 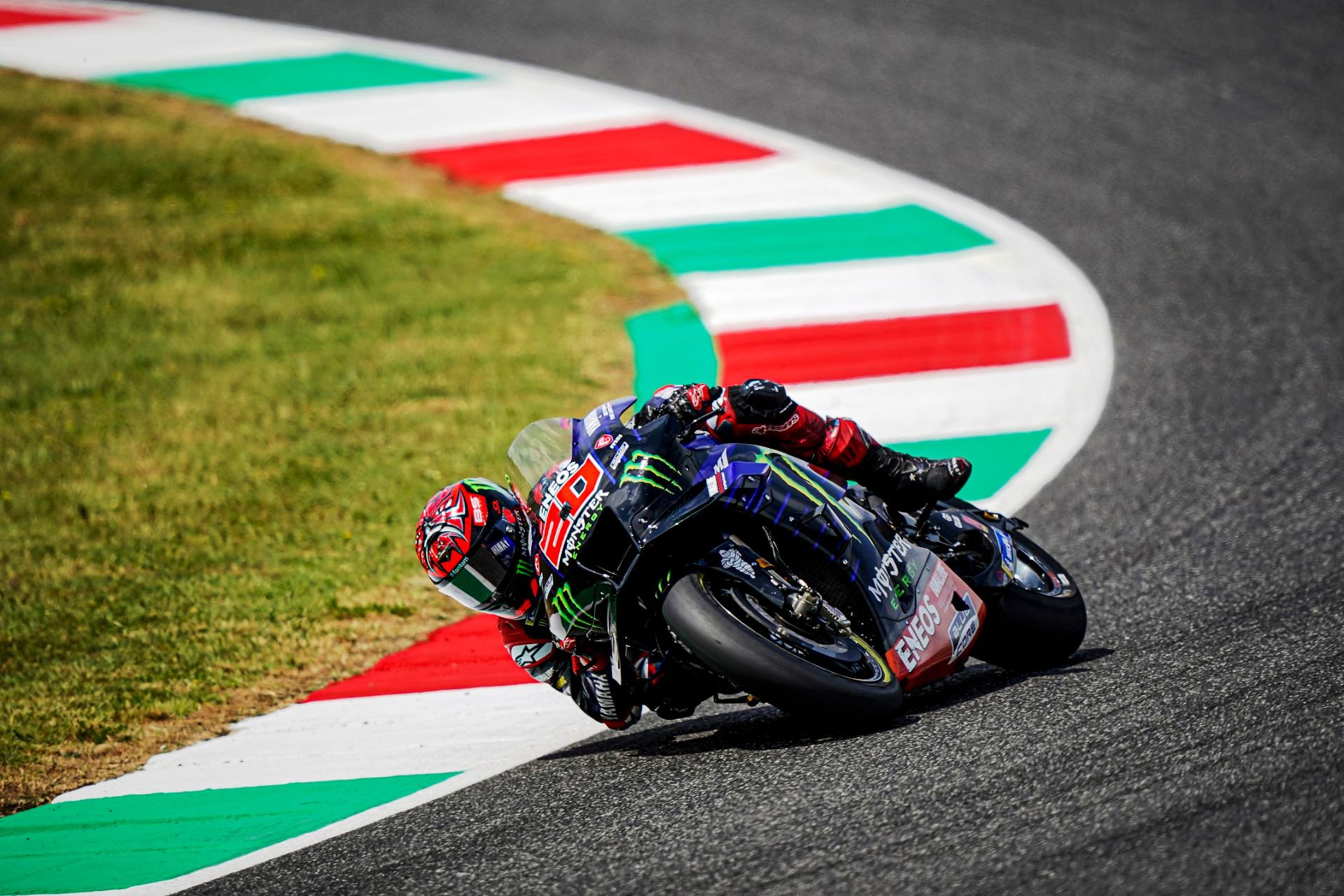 Monster Energy Yamaha MotoGP‘s Fabio Quartararo rode his Yamaha YZR-M1 to a magnificent second place at the Autodromo Internazionale del Mugello, extending his championship lead to 8 points. Franco Morbidelli had to recover from a less than desirable opening sector but did so with fortitude. He rode from last place after the first corner to 17th across the finish line. 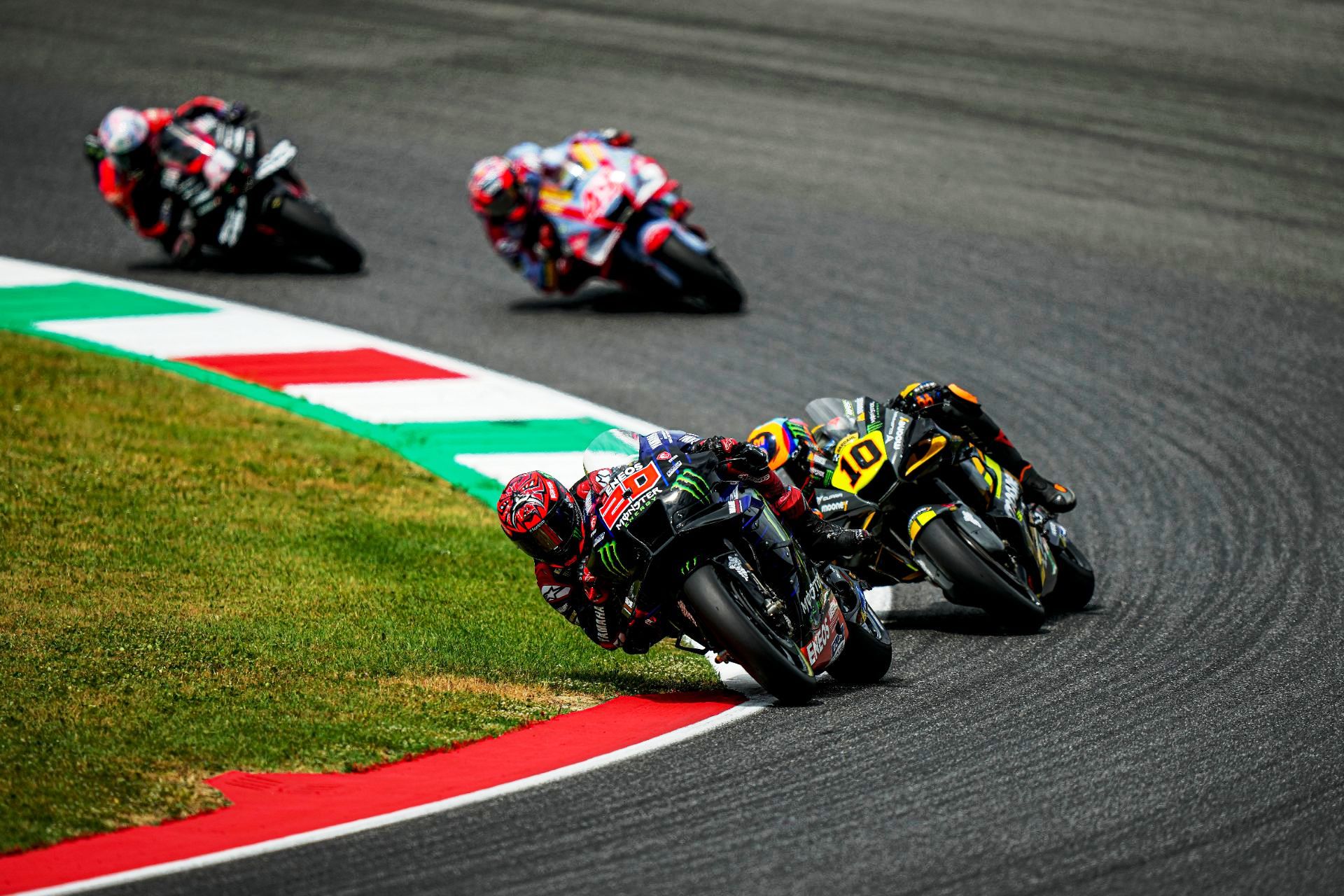 A strong start from Quartararo from P6 saw him storm towards the first corners side by side with the five riders starting ahead of him. The Frenchman  gained a place, and despite a brief exchange of position with Aleix Espargaró he completed the first lap in fifth place. 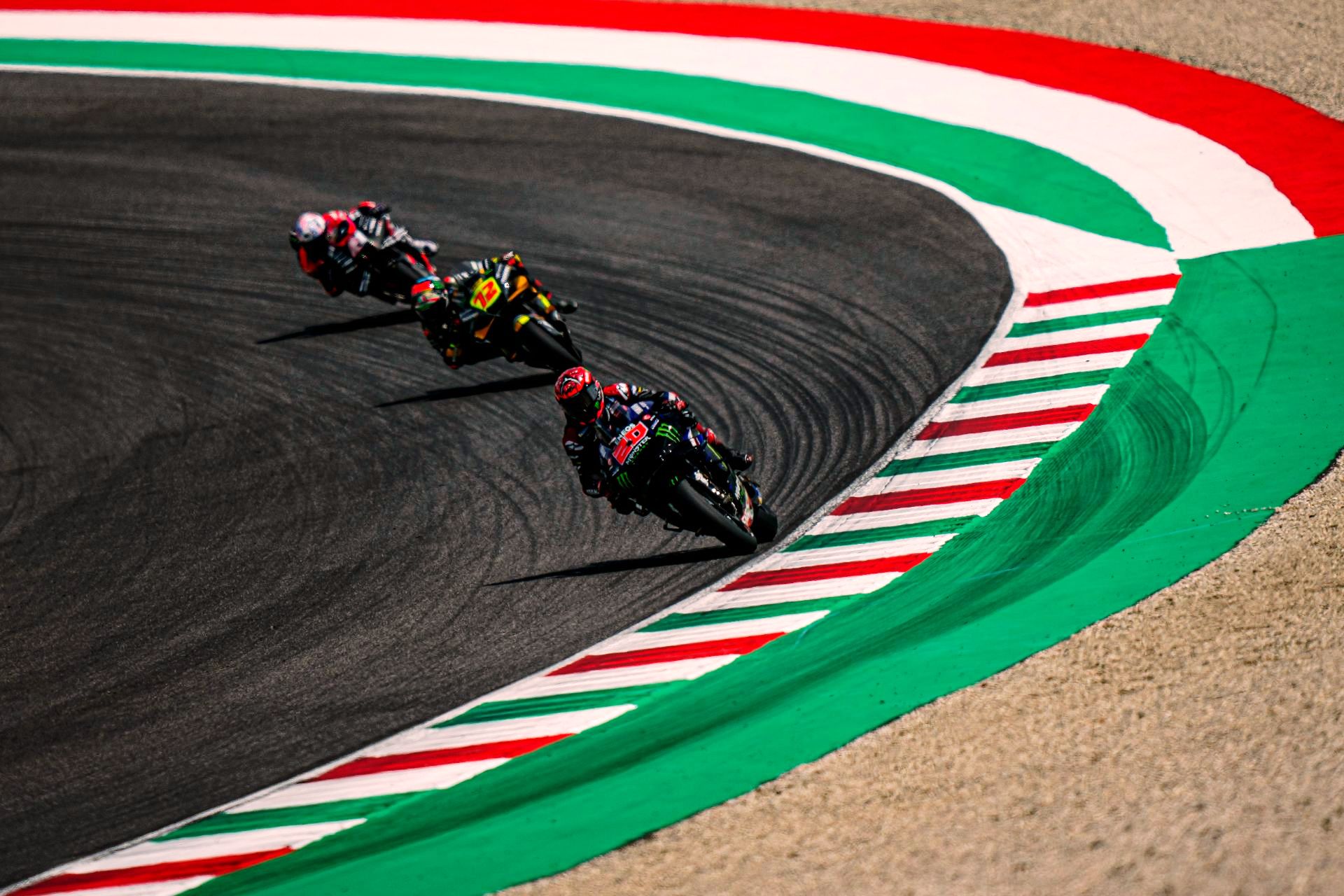 El Diablo was on the charge. He bravely overtook multiple rivals and moved into second place on lap 4. He used the nimble character of the YZR-M1 to the fullest in the twisty parts of the circuit and made his bike as wide as possible on the straights. However, he still had to let Francesco Bagnaia pass. But with 18 laps to go, Quartararo knew that if he could stay with the leading two riders, the race might come towards him in the final stages because the Yamaha man was on the hard rear tire. 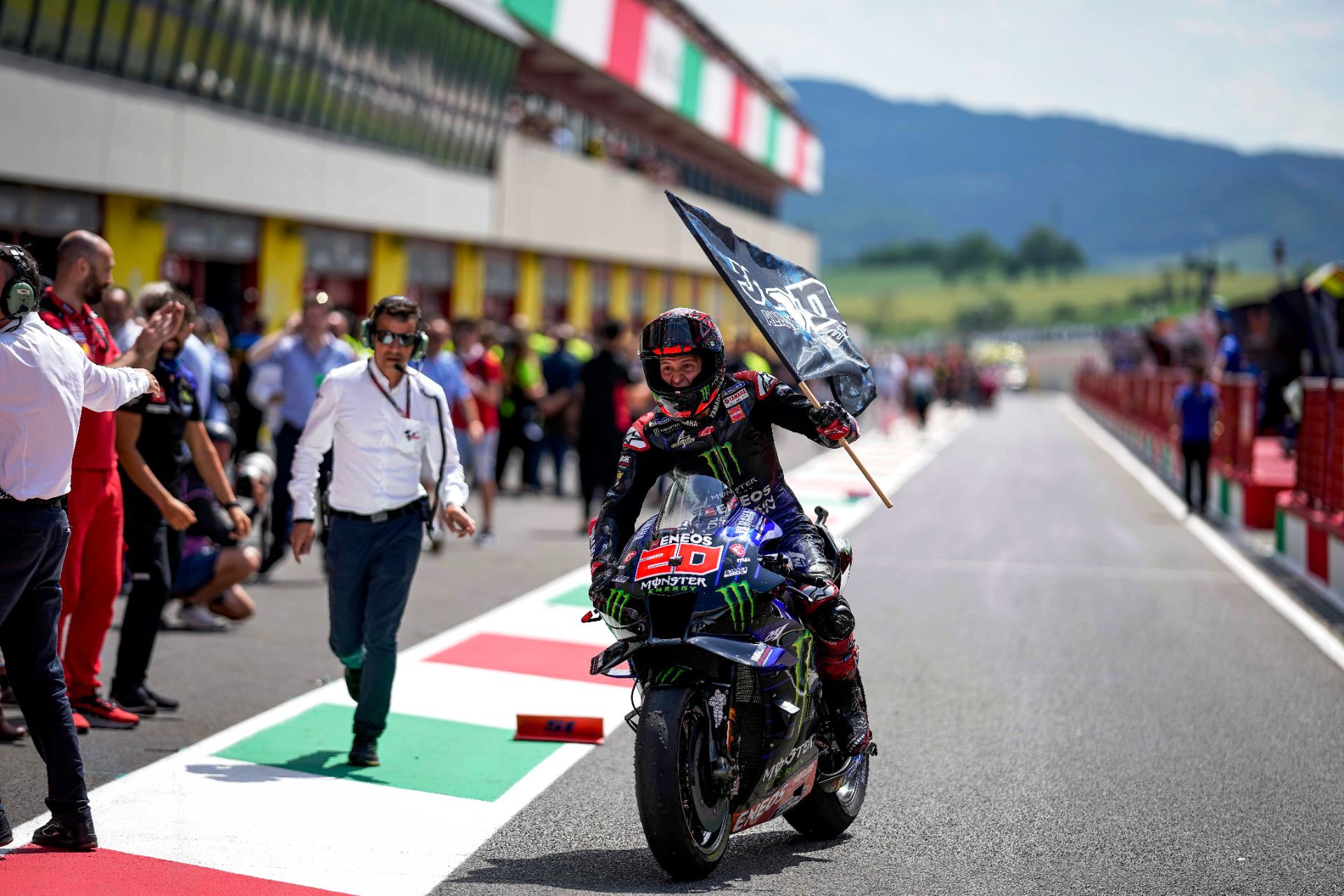 On lap 11 he launched his first attack on Marco Bezzecchi and made it stick. Back in second position, he chased Bagnaia whilst still having to keep Bezzecchi and Luca Marini at bay. After several closely contested laps, he managed to break away from the Mooney VR46 riders. Though he wasn‘t able to close the gap to first, he celebrated second place and a four-point extension of his lead in the championship standings as he crossed the finish line, 0.635s from first. 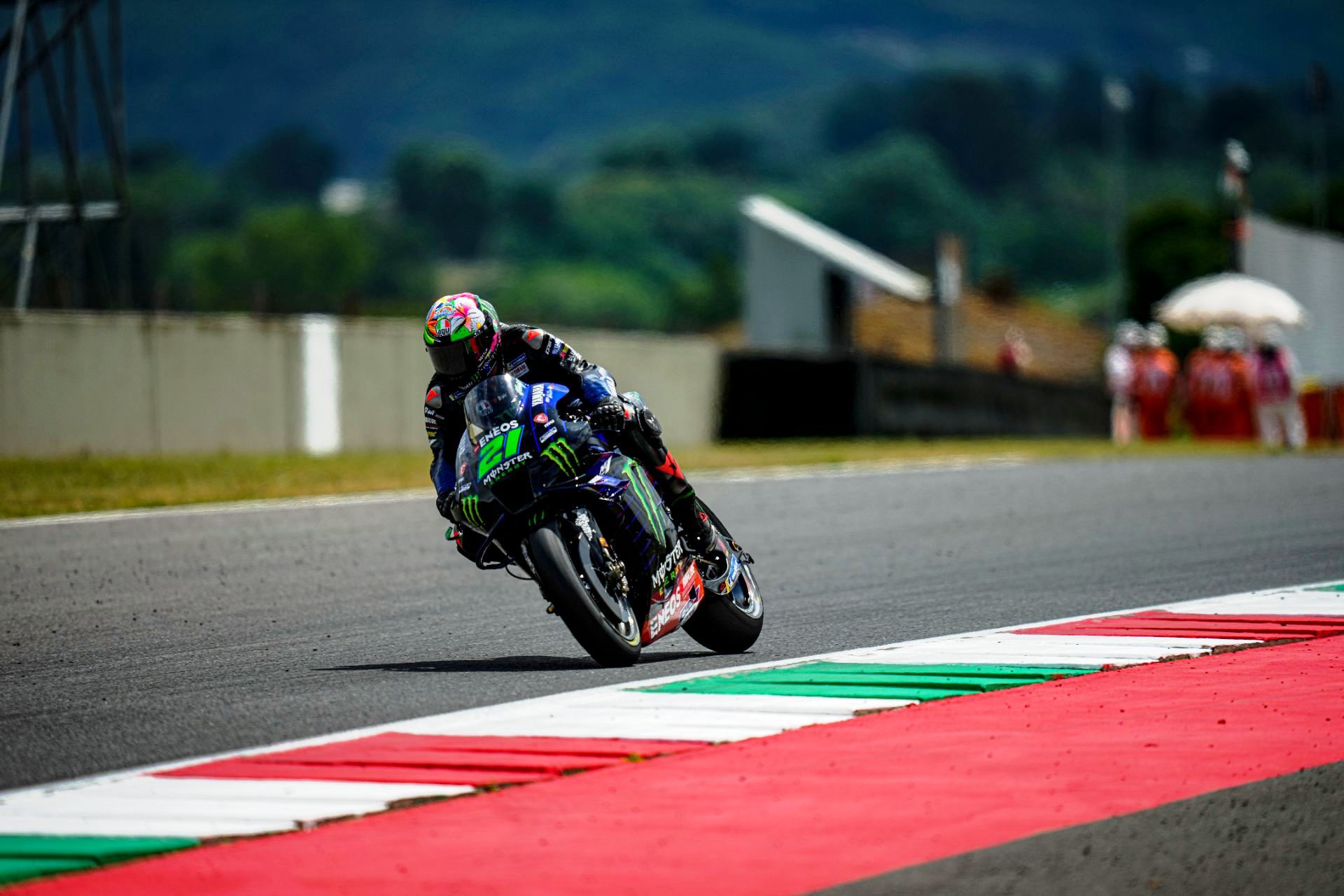 Morbidelli didn‘t have the start he had hoped for. Launching from P23 on the grid, he found himself in last place after Sector 1. The only way was up, and so the home hero rolled up his sleeves and got to work. He made up five places, and with three other riders retiring from the race, the Italian settled into 18th place by lap 8. 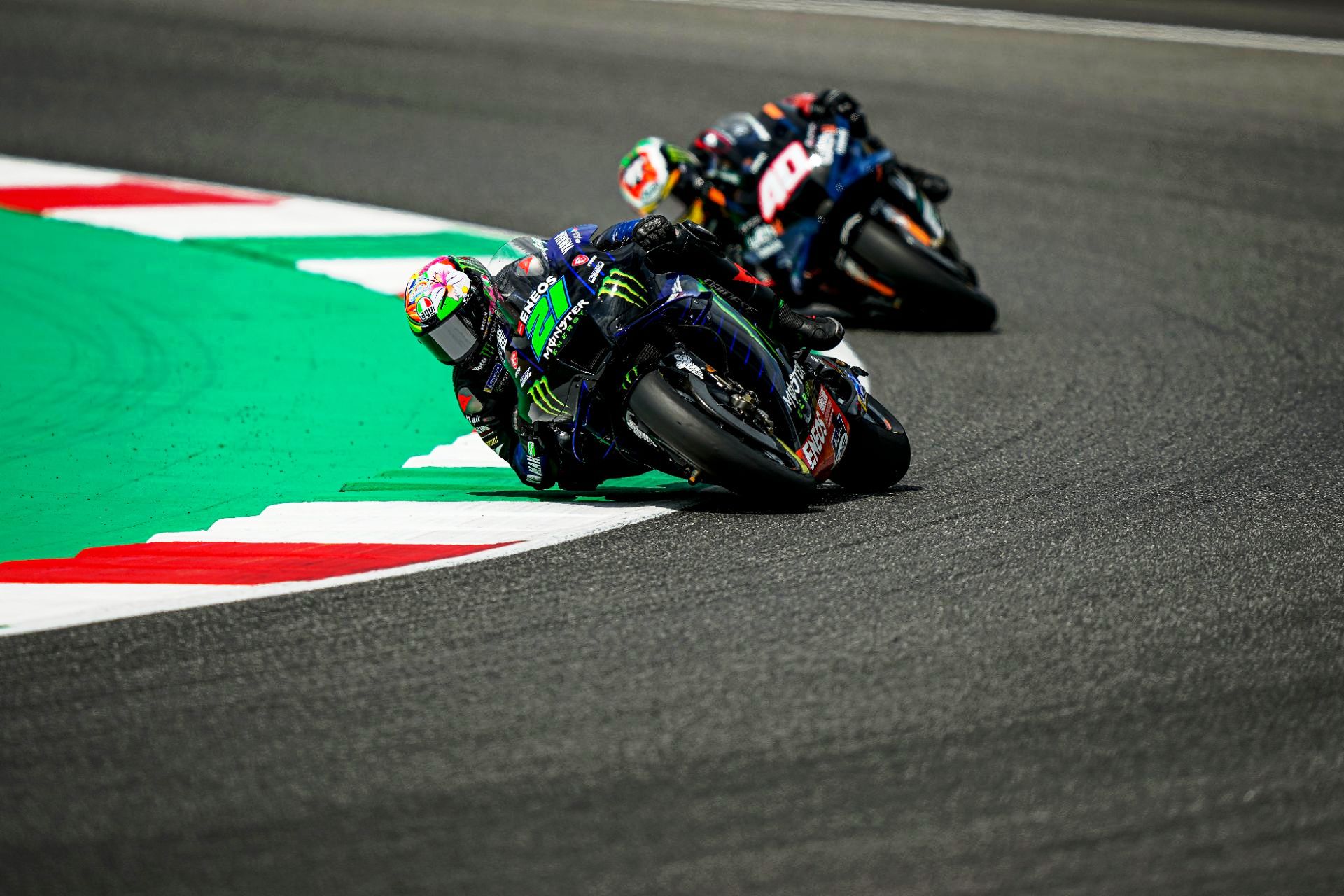 The number-21 rider focused on his rhythm and was able to catch up with Michele Pirro. After Enea Bastianini crashed, Morbidelli was fighting for 16th position and he passed Pirro on lap 21. The gap to the rider ahead of him was too big for the Italian to bridge in the final few laps, and at the finish line he was pipped to the post by Darryn Binder. He ended the race in 17th place, 20.296s from first. 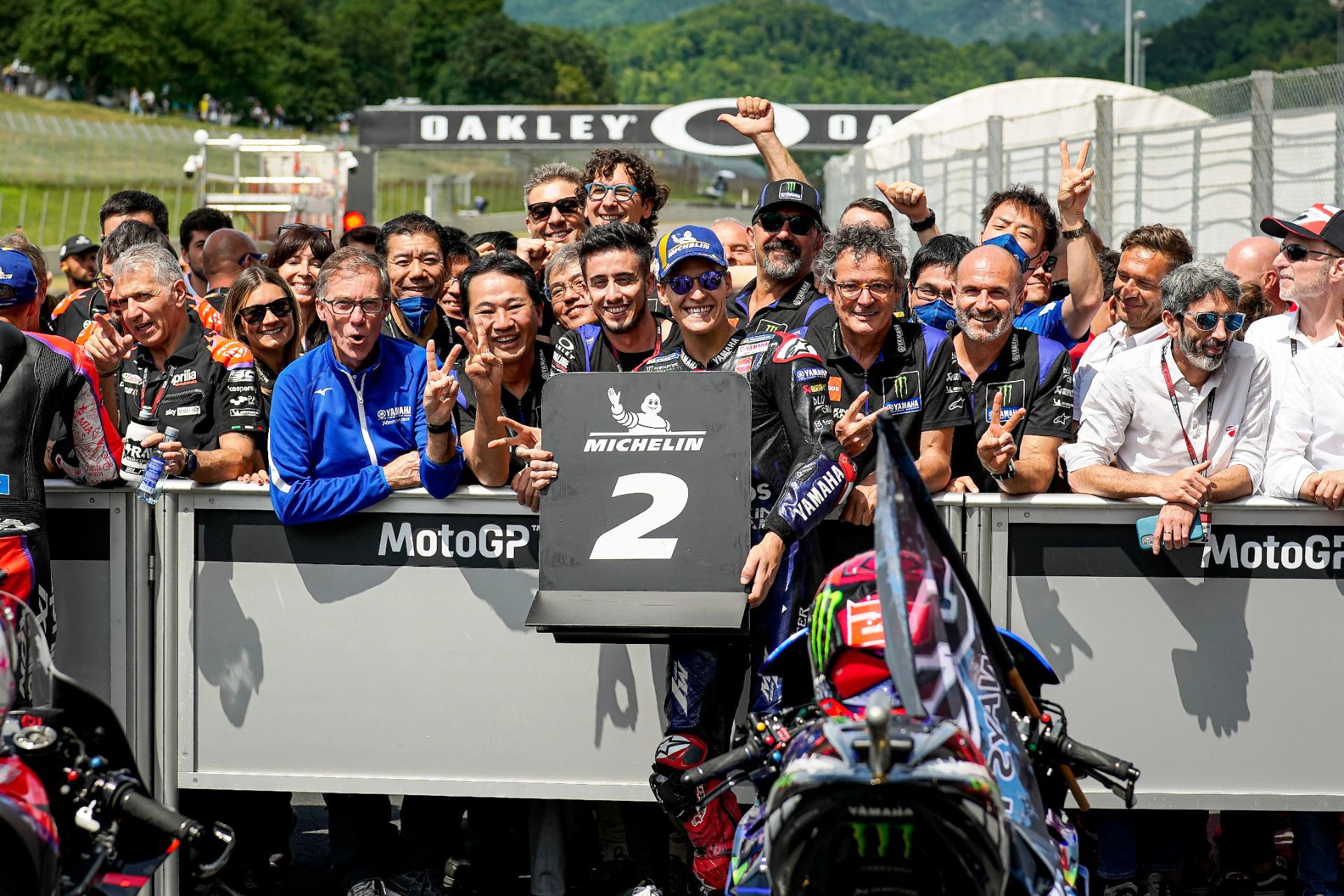 The results see Quartararo remain in the lead of the championship standings and increase his points total to 122, while Morbidelli is now in nineteenth with 19 points. After Round 8, Yamaha remain second with 122 points in the Constructor championship and Monster Energy Yamaha MotoGP continue to hold third position with 141 points in the Team championship.

The team will be back in action at the Gran Premi Monster Energy de Catalunya at the Circuit de Catalunya-Barcelona, held from 3-5 June. 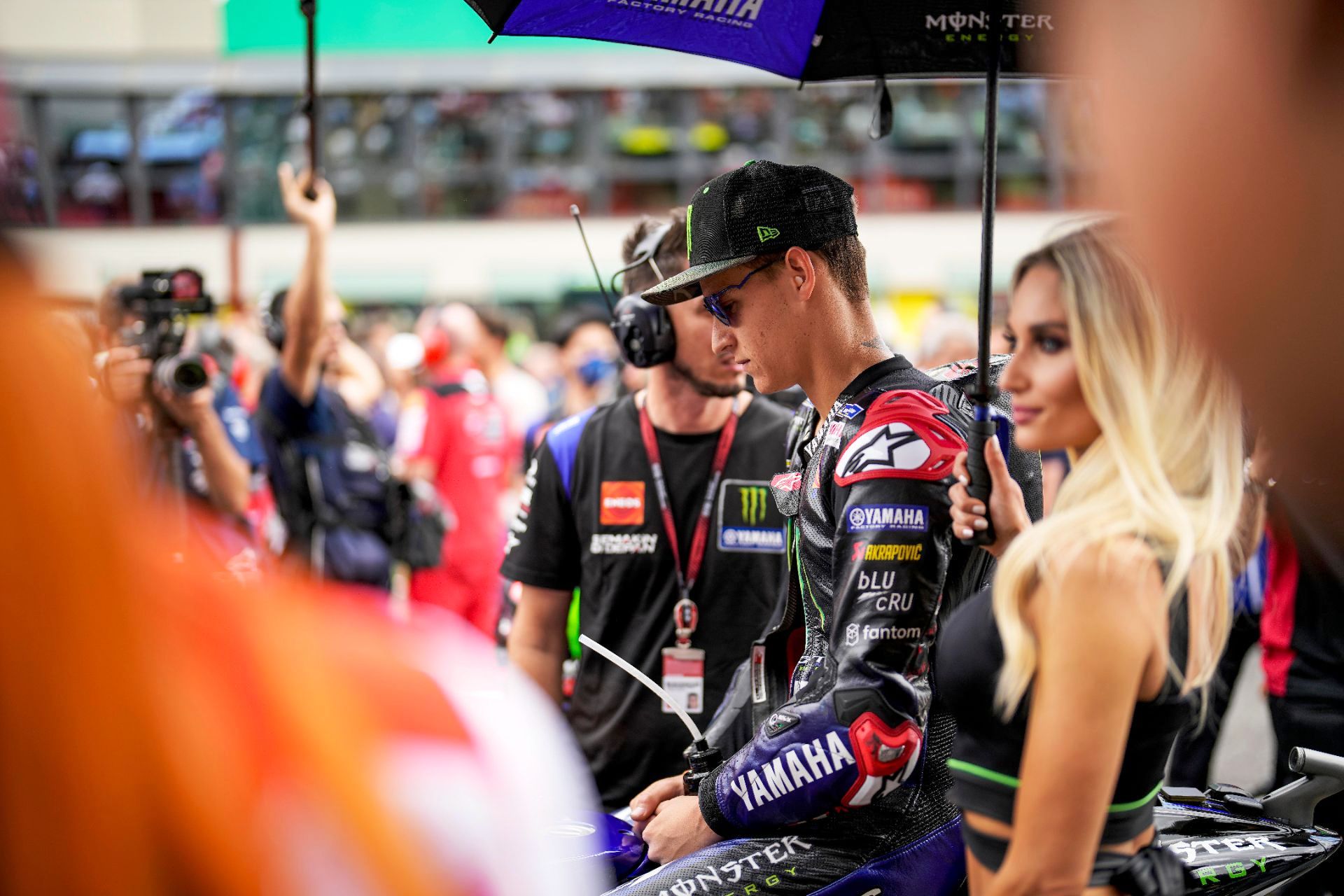 Fabio Quartararo: “I didn‘t think that the podium was possible. But before the race I believed in myself and said ’I have the pace to be in the top 5 today‘ and we did a second place. That was, I think, one of the best races of my career. Of course, I would have preferred to win, but I‘m pleased to be on the podium after a tough race like this one. I made a good start and did good overtakes, despite sliding with the front and rear. Before the race I wasn‘t feeling that good on the bike. During the race it was not perfect, but it was better, and I could feel where the limit was. I love riding my bike, I was having a lot of fun, and I could get a really good result. We did a massive job!” 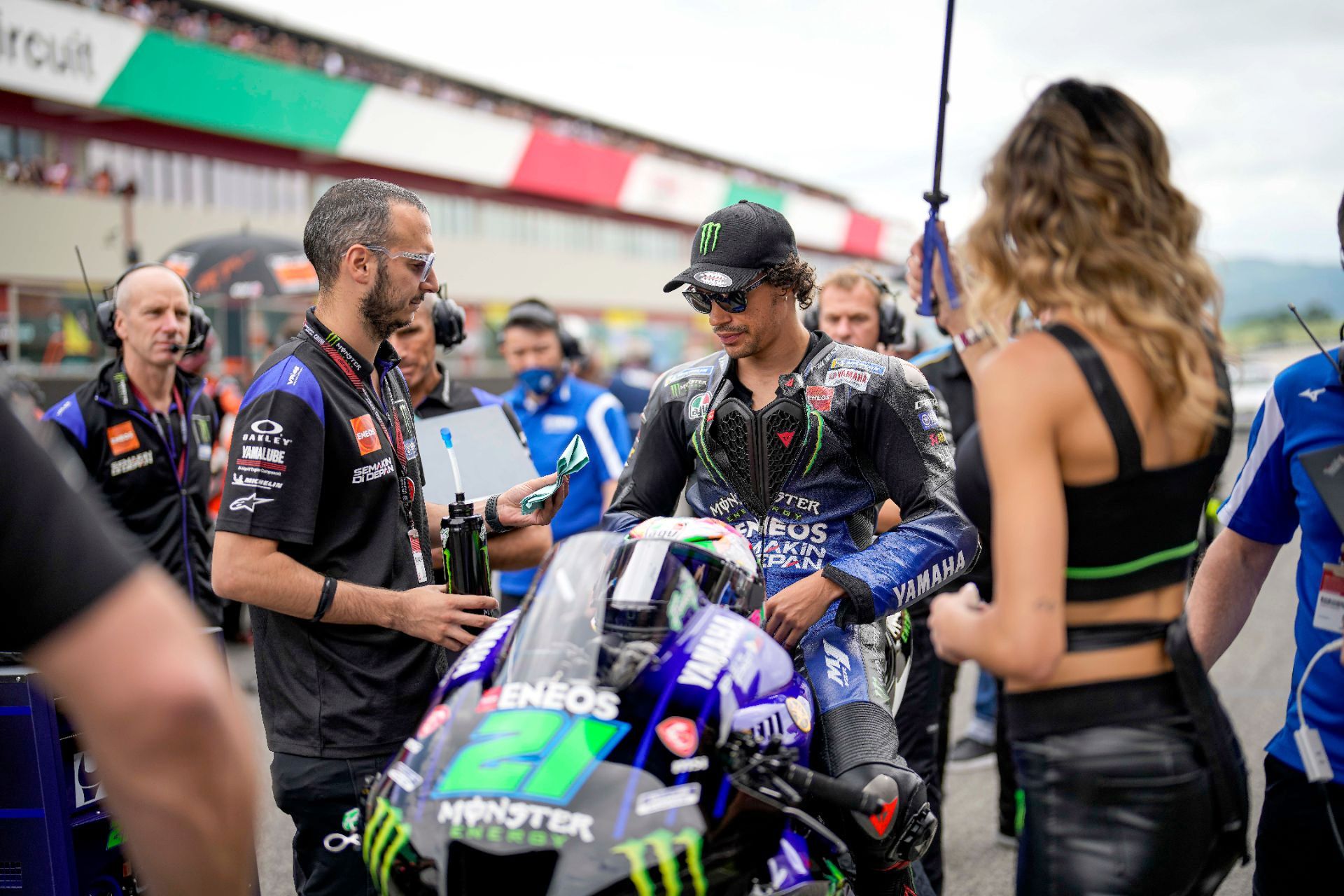 Franco Morbidelli: “Starting from the 23rd position was tough, but I caught up with the riders in front of me fighting. I was in 16th position. Unfortunately I wasn’t able to get into the group fighting for the points. Darryn Binder was behind me all of the race but then used the slipstream to overtake me by 0.031s at the finish line. But overall we made some improvements. We’ll try to improve other things in Barcelona.” 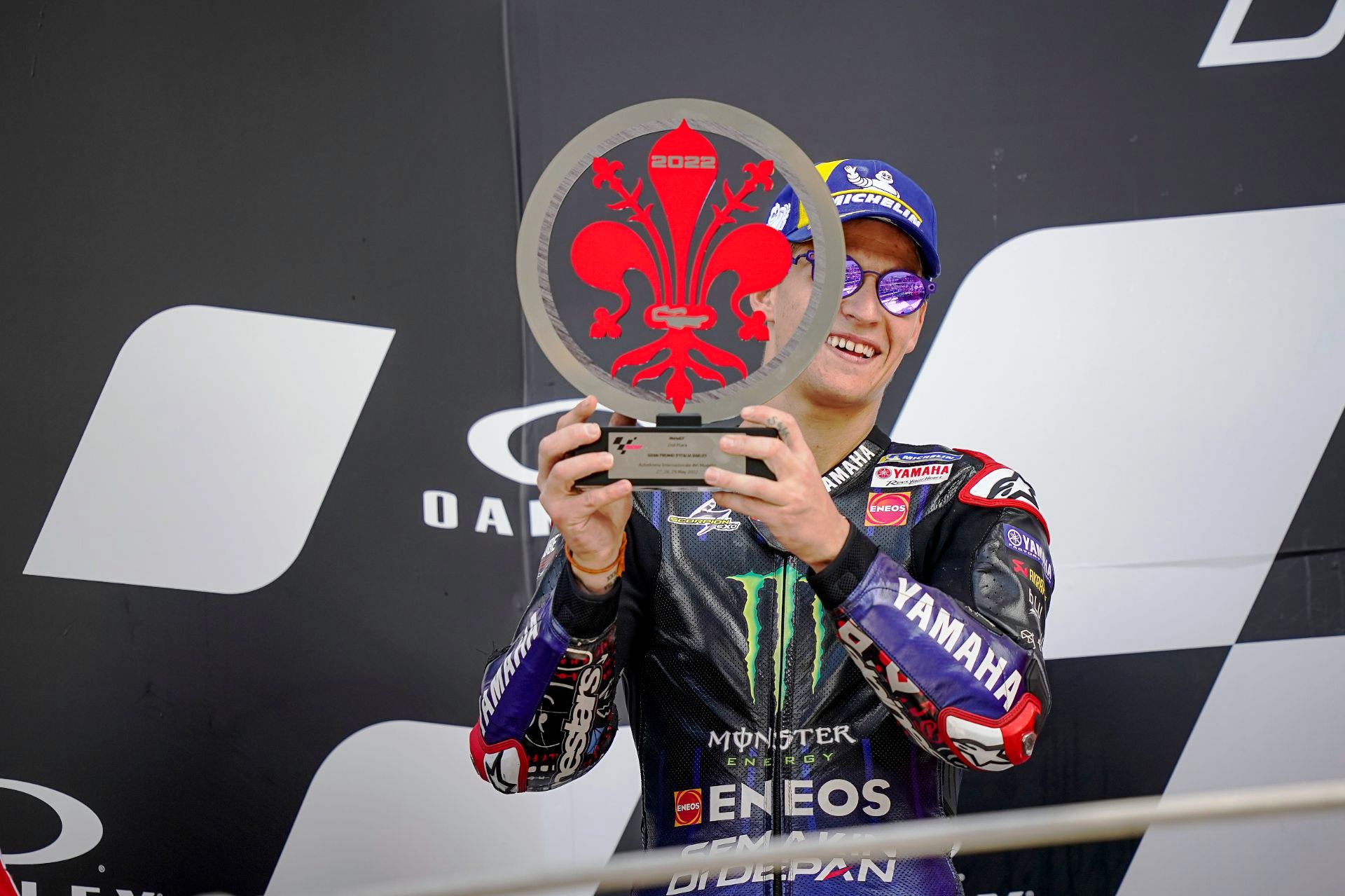 Massimo Meregalli (Monster Energy Yamaha MotoGP, Team Director): “This second-place finish from Fabio is a fantastic achievement! It tastes almost like a victory, especially here! And it‘s even more impressive because Fabio wasn‘t feeling very confident this morning. To turn things around 180° – what a rider! This podium is a testament to how hard the team works until the very last minute to strive for the best results. Franco was starting from P23 on the grid and didn‘t have a good start. That is very tough to come back from, but he pushed on. He was able to recover some positions, but his overall result doesn‘t reflect his potential. We now move on to Barcelona. The Catalan GP and our team share a Title Sponsor: Monster Energy. We are highly motivated after today‘s podium to also give it some welly there!”