After a thrilling season opener in Thailand, the FIM Asia SuperMoto Championship 2018 turns its attention to the second round in the Philippines this September. A first for the Championship, the round will be staged at the iconic Quirino Grandstand at Rizal Park located in the heart of the capital city of Manila from 7 to 9 September. 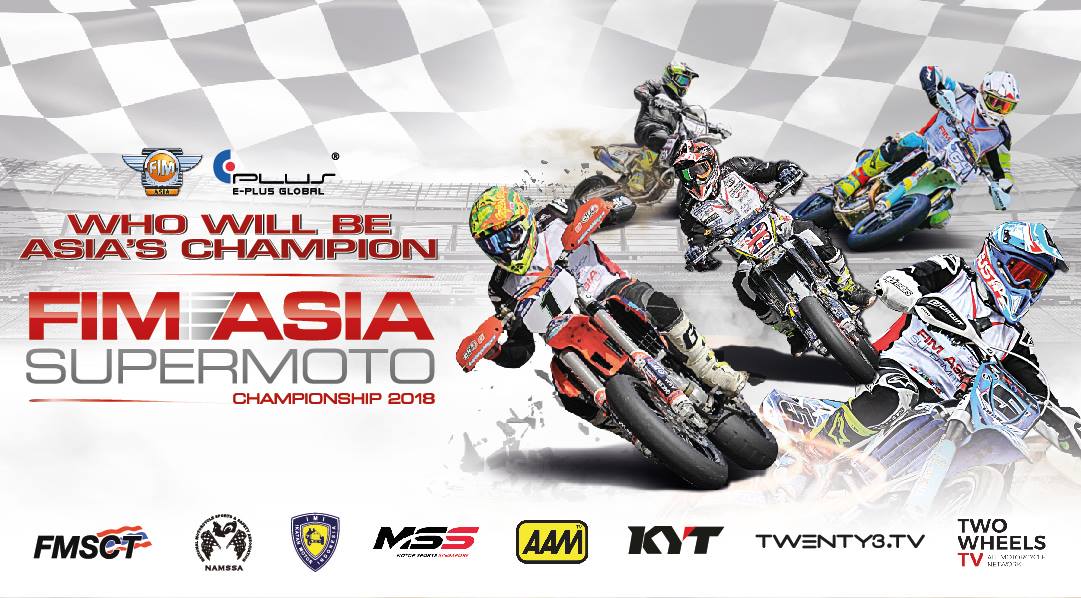 “We are really honoured to bring back the FIM Asia SuperMoto Championship to the
Philippines again this season after a year’s hiatus! To have the round at what is considered
to be the original home of two-wheel motor racing in the country – the iconic location of the
Quirino Grandstand in Manila is going to be amazing for the riders, teams and fans to
experience. We would like to thank the Department of Tourism (DOT), the National Parks
Development Committee (NPDC), and the Moto Tourism Council (MTC) for this incredible
opportunity. With the competition already heating up following a stunning season opener in
August, we can expect the riders to give it their all at the round, giving Philippine racing
enthusiasts and fans something to look forward to!” notes Andrew Ching, Chief Executive
Officer of E-Plus Global Sdn Bhd, promoter and organiser of the FIM Asia SuperMoto
Championship.

“The FIM Asia SuperMoto Championship has been experiencing exponential growth over the
past three seasons on the back of the healthy growth of motorcycle racing in Asia in general.
To be able to stage a round of the Championship at the country’s most famous landmark of
the Quirino Grandstand is a definite boost in our ongoing and continued motorsports
development efforts in the Philippines. By working with our local entity, E-Plus Event
Management Philippines, Inc. and local partner, Plug & Play 360 Corporation we are able to
bring motorsports closer to the public and the high level of competition with the quality of top
international riders coming through means we can look forward to an action-packed
weekend of SuperMoto action this September,” added Ching.

Featuring a line up of some of Asia’s best talents, the race for the FIM Asia SuperMoto
Championship 2018 title is proving to be a hotly contested affair. With two Philippine riders
on this season’s grid, Mark Reggie A. Flores and Kenneth San Andres will both be looking to
leverage on home ground advantage at the round in their bid to be ranked amongst Asia’s
best. Meanwhile, following his near-perfect performance with two wins at the Thai season
opener, Denmark’s Simon Vilhelmsen will be looking to build on his championship and Best
International Rider title bid at the Philippine round. Ranked fourth in the world, the Dane will
face stiff competition from the United Kingdom’s SuperMoto star, Lewis Cornish who will be
looking to bounce back in Manila after poor health undermined his race in Thailand.

Proceedings for the second round of the FIM Asia SuperMoto Championship 2018 will
commence on Friday, 7 September with practice sessions, followed by Qualifying and
SuperChrono sessions on Saturday, 8 September. The Moto 1 and Moto2 races will take
place on Sunday, 9 September.

Supported by the Philippine Department of Tourism (DOT), the Philippine National Parks
Development Committee (NPDC) and the Moto Tourism Council (MTC), the second round of
the FIM Asia SuperMoto Championship 2018 season at the Quirino Grandstand in Manila
will be streamed live through its OTT channel partners, twenty3.tv and twowheels.tv. More
information on the FIM Asia SuperMoto Championship is available at
www.supermotoasia.com and at www.facebook.com/FIMAsiaSupermoto

From the Philippines, the FIM Asia SuperMoto Championship 2018 will head to Kupang City,
East Nusa Tenggara in Indonesia for Round 3 from 26 to 28 October followed by Round 4 at
Singapore’s KF1 Circuit in Kranji from 23 to 25 November. The season finale round will take
place in Malaysia from 30 November to 2 December.

ABOUT THE FIM ASIA SUPERMOTO CHAMPIONSHIP
Launched in 2016, the FIM Asia SuperMoto Championship enters its third season in 2018 with five
rounds in Thailand, Philippines, Indonesia, Singapore and Malaysia. Featuring riders who will
compete on a track that alternates between off-road hard-packed dirt track, motocross-style obstacles
and paved road-racing asphalt tarmac. Growing from strength to strength since its inception, the
Championship remains single-minded in its objective toward the continued development and growth
of SuperMoto in the region in addition to contributing to the active promotion of motorsports in Asia.

ABOUT E-PLUS GLOBAL SDN BHD
Incorporated in 2004, E-Plus Global Sdn Bhd is a full-fledged one-stop event management company.
The multi award-winning agency is the brainchild of a dynamic and creative team that provides
innovative and creative ideas in both planning and executing events for clients, both locally and
internationally.

Recognised as one of the top and more experienced events management agencies in the region, the
company continually seeks to elevate industry practices through its unique, creative and innovative
ideas. In recent years, it has expanded operations to five other countries in the region and currently
operates in Hong Kong, Indonesia, Malaysia, Philippines, Singapore, and Thailand.
www.eplusglobal.com