Pramac Racing rider Jorge Martin spent a significant amount of time in rehab this year as he recovered from injuries sustained in a horror crash earlier this season, but moments like last Sunday are ones he could savor for a lifetime. 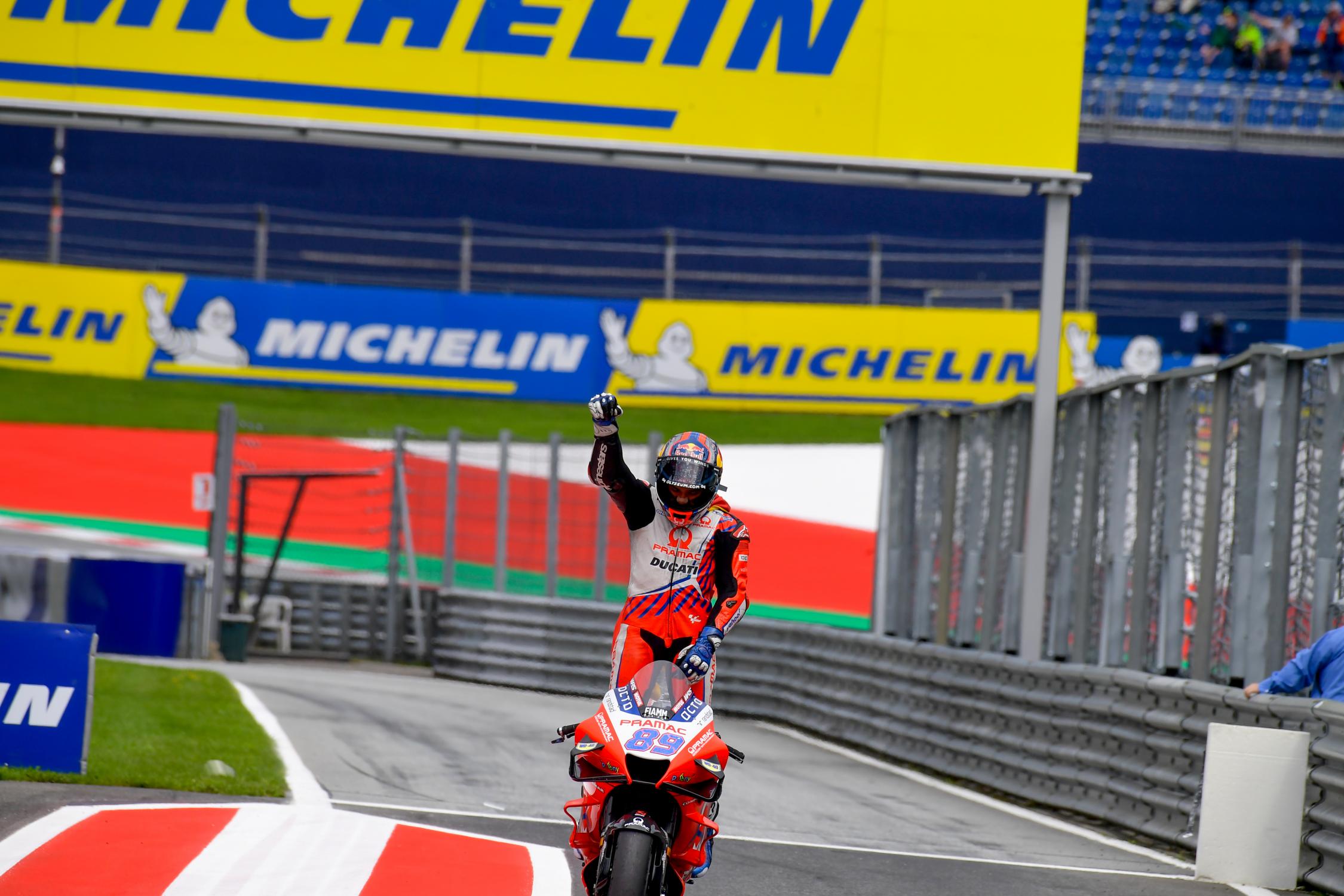 The rookie sensation showed experience beyond his years to hold off the challenge of World Champion Joan Mir (Team Suzuki Ecstar) for a maiden premier class win at the Michelin Grand Prix of Styria. At an event that brought out red flags, Fabio Quartararo (Monster Energy Yamaha MotoGP) also stood on the podium, with the Frenchman extending his Championship lead as a result. 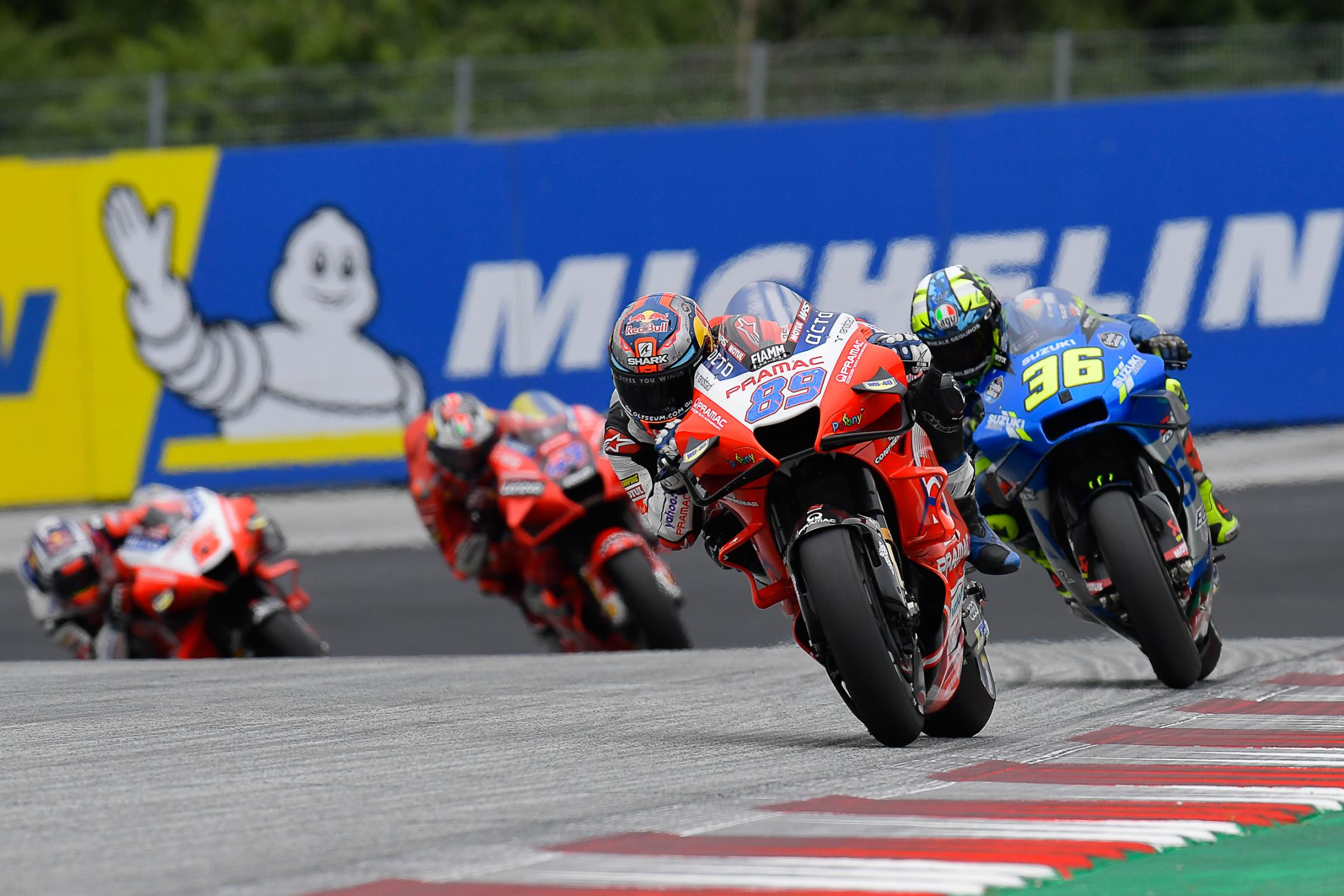 It was a sensational performance from the poleman, who was able to keep his nerve despite a dramatic backdrop to a thrilling race in Spielberg. A pulsating start to the Grand Prix was brought to a premature end on the second lap when the red flag was waved after Dani Pedrosa (Red Bull KTM Factory Racing) highsided and Lorenzo Savadori (Aprilia Racing Team Gresini) crashed into his loose bike. The Italian was sent flying from his RS-GP, which exploded into flames on-track. Thankfully, both riders walked away from the incident relatively unscathed, with Pedrosa able to take his place on the grid upon the restart. 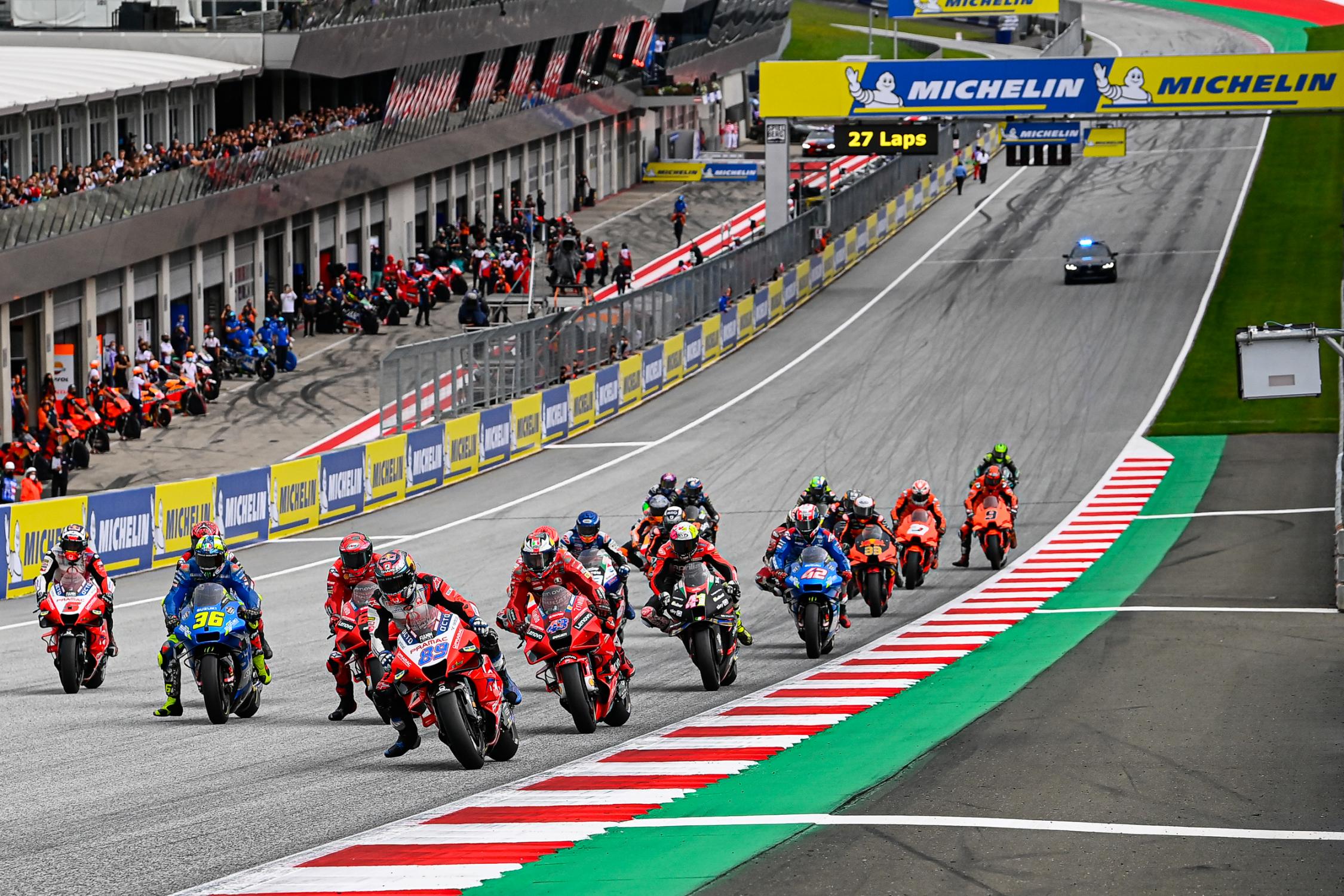 On first go, a blockbuster start saw Francesco Bagnaia (Ducati Lenovo Team) take the holeshot ahead of Martin. There was plenty of aggressive racing too, with Marc Marquez of course at the centre of it. From the off the Repsol Honda rider clashed into Aleix Espargaro (Aprilia Racing Team Gresini), with the two having words on the track about it, before Mir and the eight-time Champion collided when the Mallorcan was moving back ahead of him. Simmering into a cracker, the red flags brought a premature end to the contest. 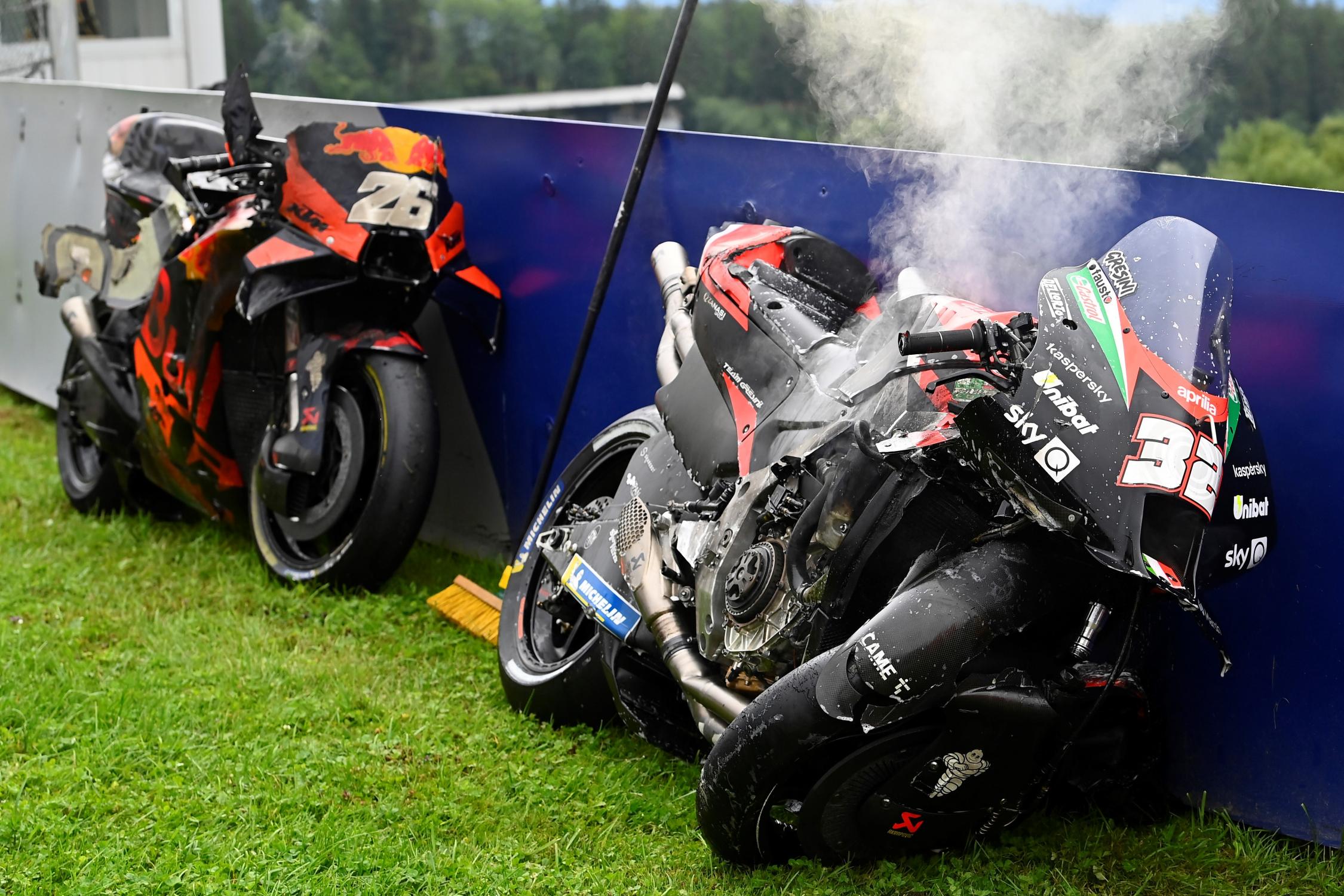 It took some time to clean up the mess, but eventually, we were good to go again, though not before we had even more drama as Maverick Viñales (Monster Energy Yamaha MotoGP) was penalized with a pitlane start after stalling his M1 on the warm up lap. Eventually, it was lights out for a 27 lap race and Martin took the holeshot, again having to contend with a factory Ducati, this time Jack Miller (Ducati Lenovo Team). Mir got off the line quickly once more and transitioned from third to second over the course of the opening laps at the expense of the Australian, and began his pursuit of Martin. 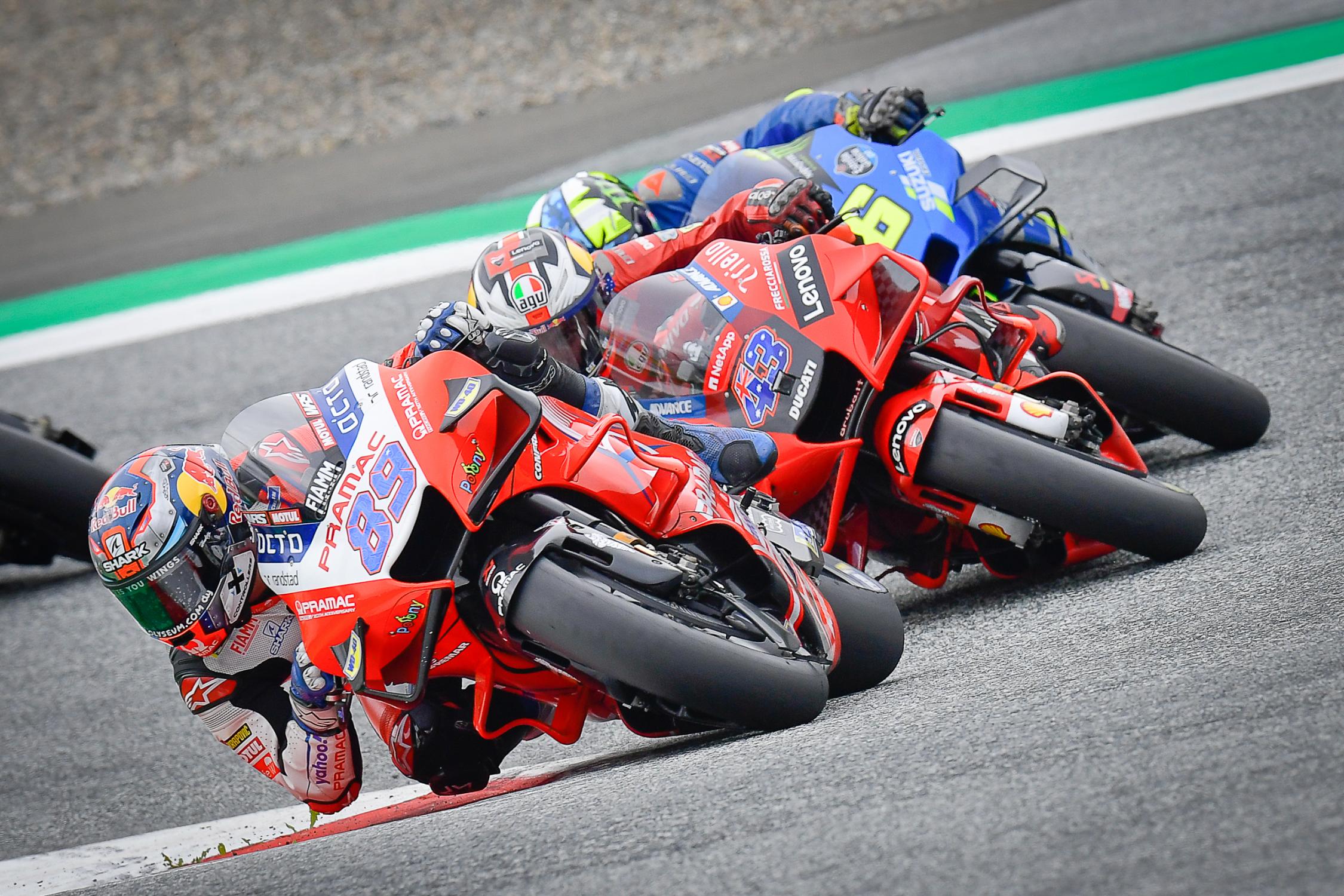 Just outside the podium places, Quartararo and Johann Zarco (Pramac Racing) were engaging in their own Championship top-two battle. The Yamaha man won this one before setting his sights on the top three, with the Frenchman moving past Miller next. It went from bad to worse for the Aussie, who crashed out of the race with less than 10 laps remaining, handing Quartararo a podium on a plate and all but ending his 2021 MotoGP™ Championship hopes.

At this point, there were no Aprilias on track as Aleix Espargaro joined Savadori, who didn’t make the restart, in the box after retiring early. Miguel Oliveira (Red Bull KTM Factory Racing) was another who failed to take the chequered flag, citing mechanical problems as his reason for returning to the pits early.

Back at the front, Martin was showing experience beyond his years to keep Mir at arm’s length, with the Suzuki man waiting for his chance to pounce. However, against the odds, it was the number 36 who made the mistake, getting it wrong at Turn 3 allowing the race leader to widen the gap to over a second, and that was that. 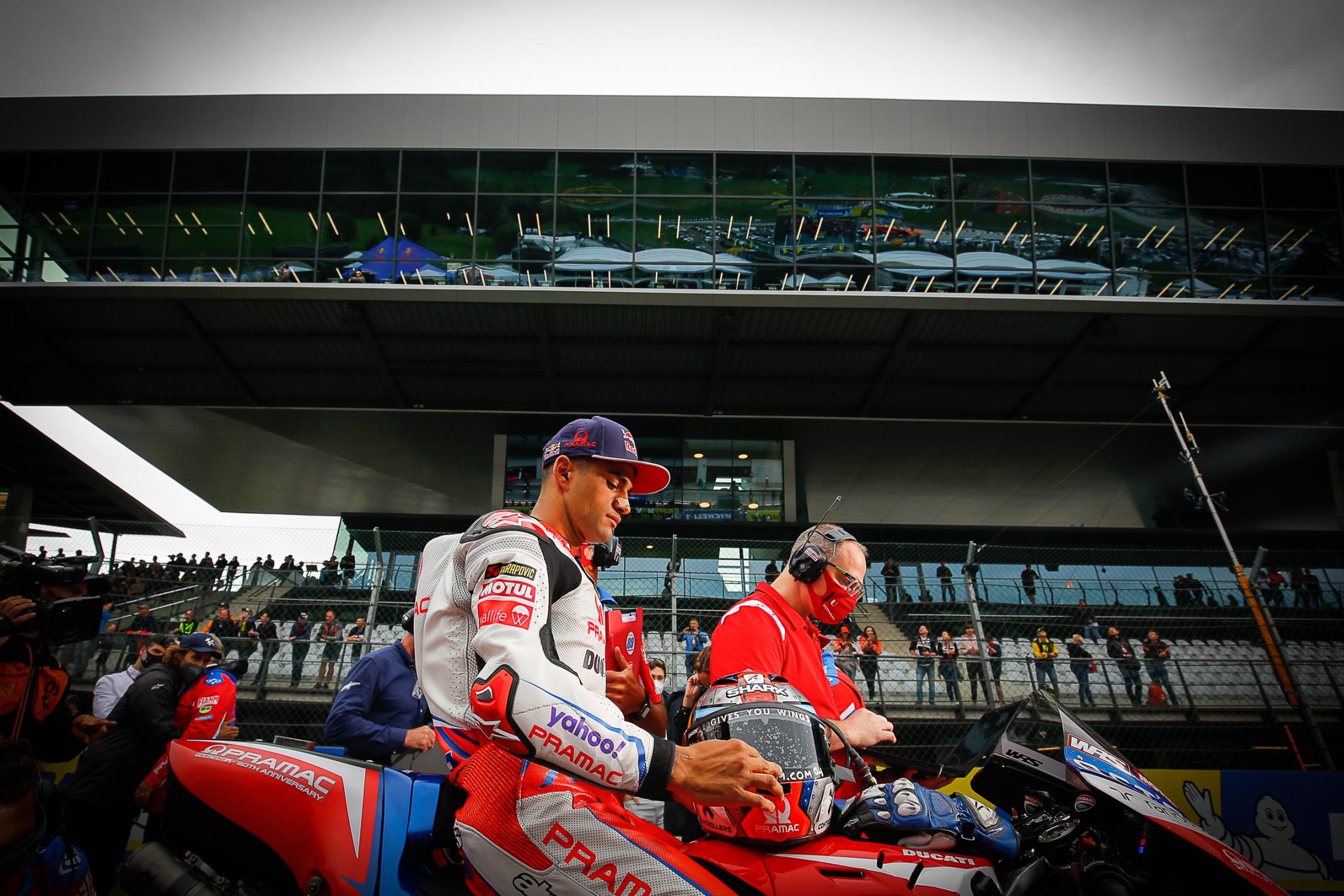 Perhaps with the bigger picture in mind, the World Champion called off the chase, settling for second and making some inroads into the Championship lead, and handing rookie Martin a sensational maiden premier class victory. 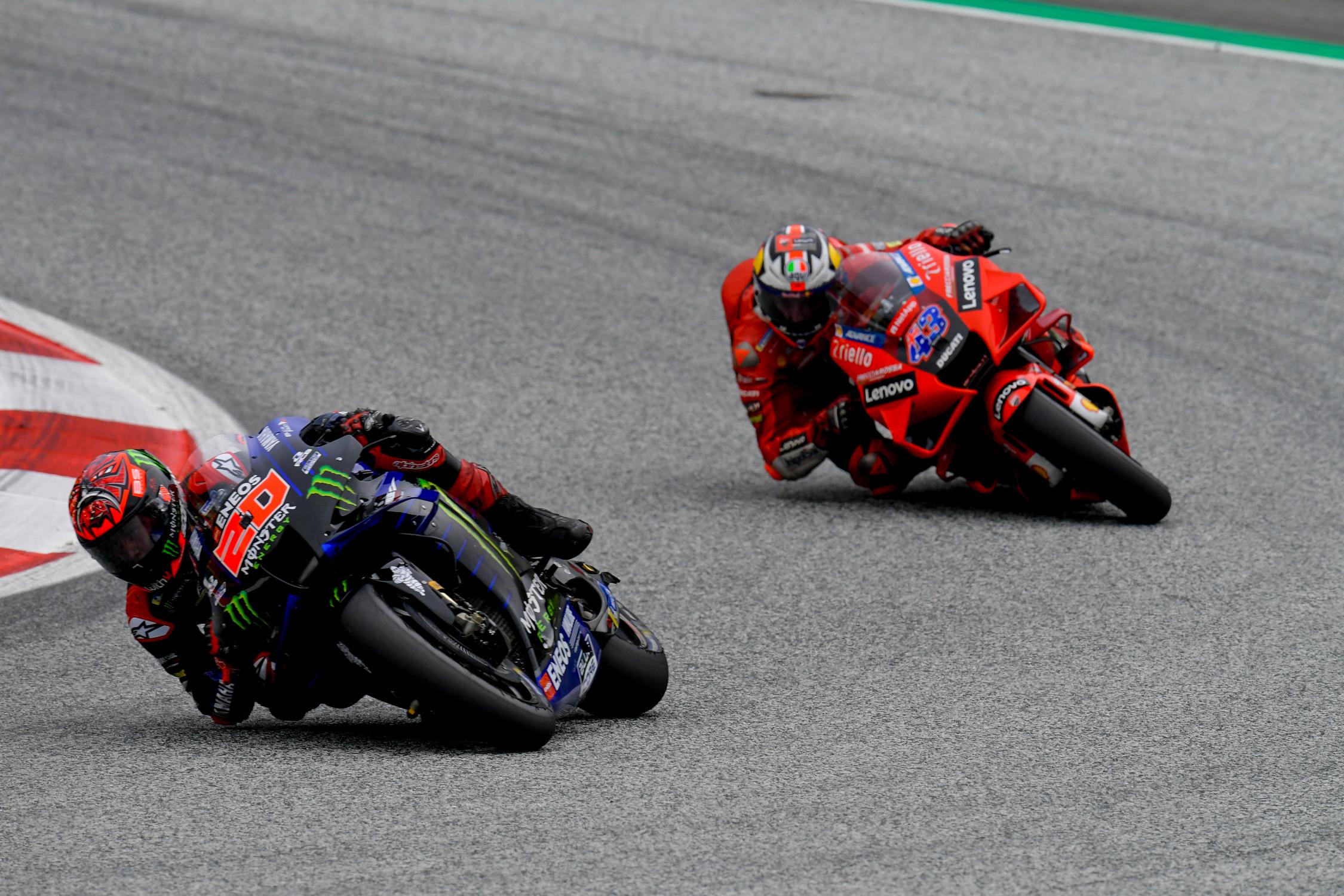 Quartararo finished third, his seventh podium in ten outings, but what happened in the battle for fourth could also have a big bearing on the fate of the 2021 Championship. On the final lap, Zarco, second in the title race, sat in P4, but hot on his heels were Brad Binder (Red Bull KTM Factory Racing) and Takaaki Nakagami (LCR Honda Idemitsu). By the time they had all taken the chequered flag, the Frenchman had dropped to P6, conceding two positions and some crucial ground in the title race. 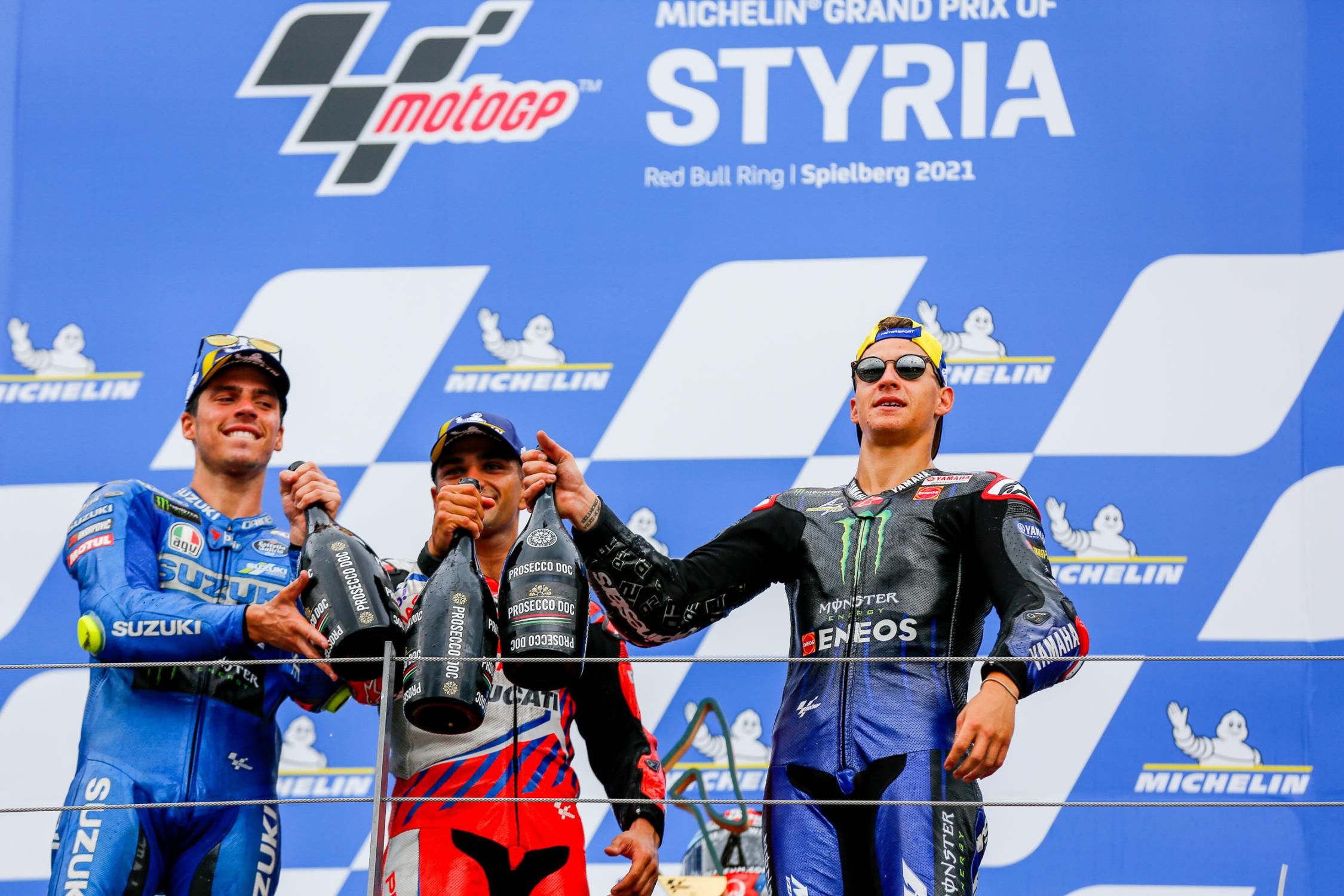 Elsewhere, Alex Rins (Team Suzuki Ecstar) worked his way through the field from a P13 start to finish seventh, while Marc Marquez couldn’t match his bustling start from the first lights out to get into race contention, though he salvaged an eighth-place finish ahead of brother Alex Marquez (LCR Honda Castrol).

It was a hugely disappointing day for Bagnia, who started from P2 on the grid, but got swallowed up on the restart. The Italian was handed a three-second penalty for failing to comply with a long lap penalty and demoted to P11 consequently, meaning Dani Pedrosa finishes in the top 10 in his first race since 2018. 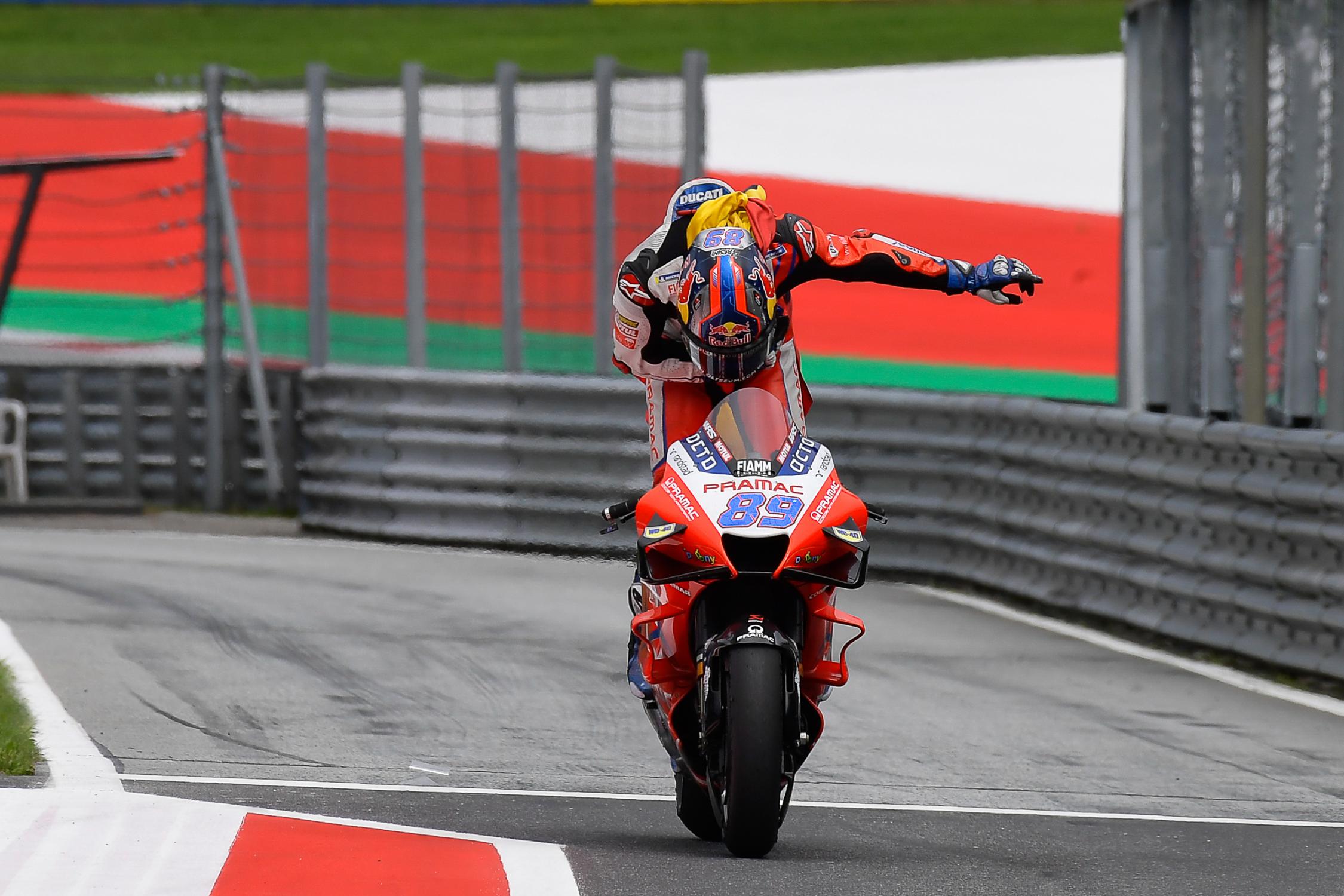 So to recap, a rookie winner, a first-ever Ducati satellite victory, a red flag and Championship twists and turns. 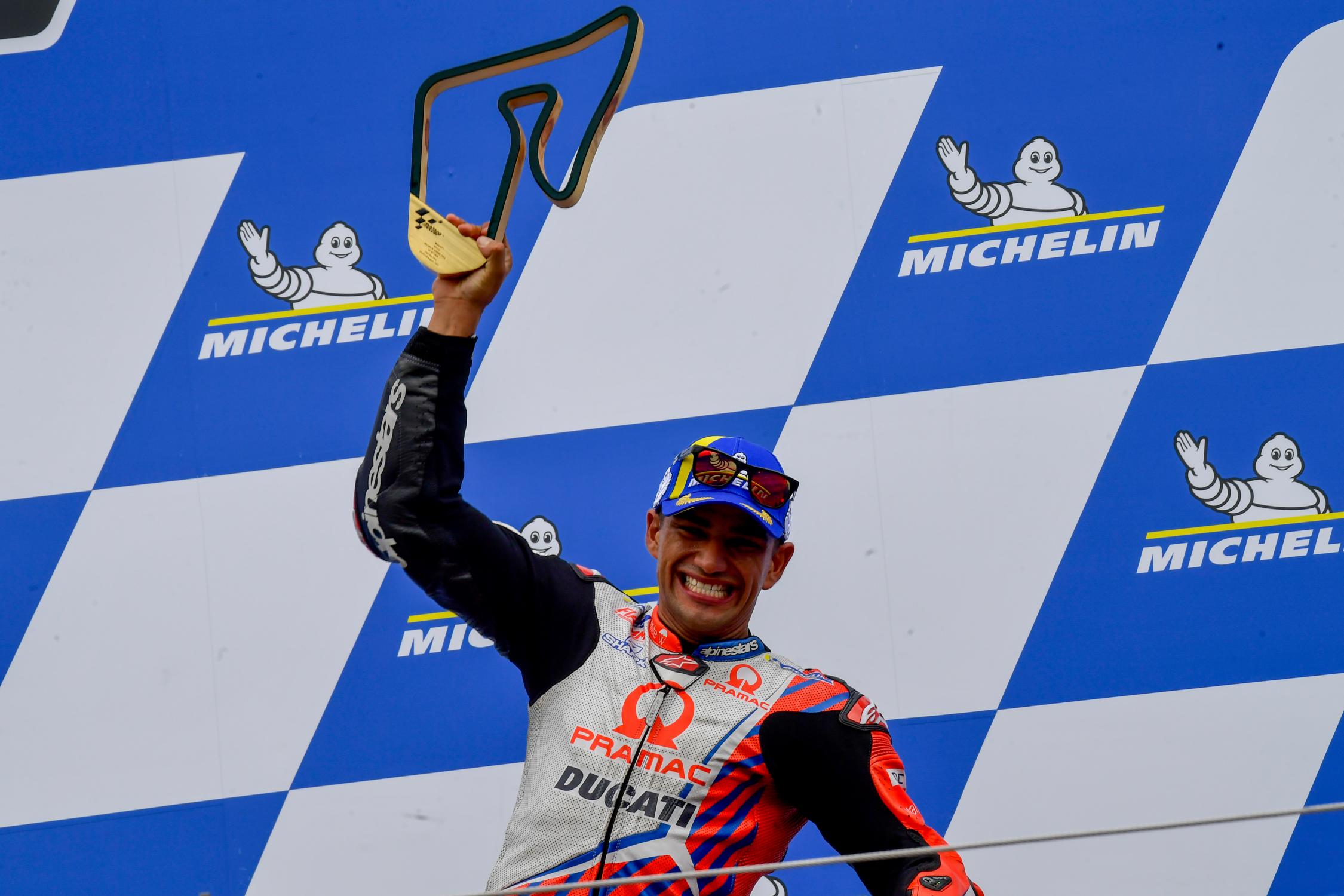 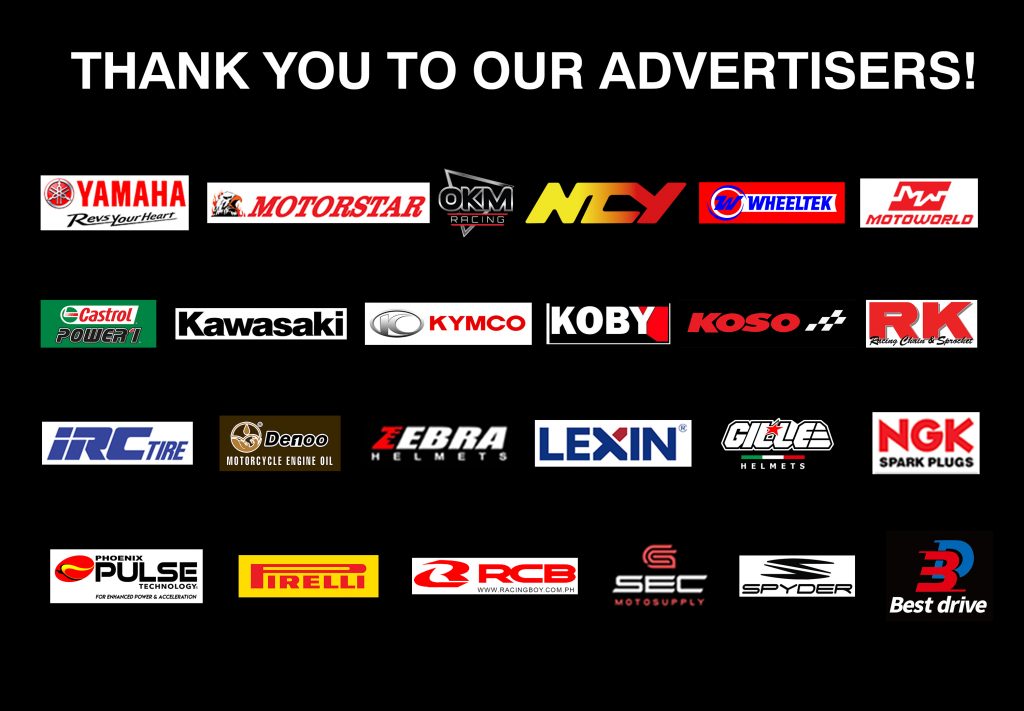 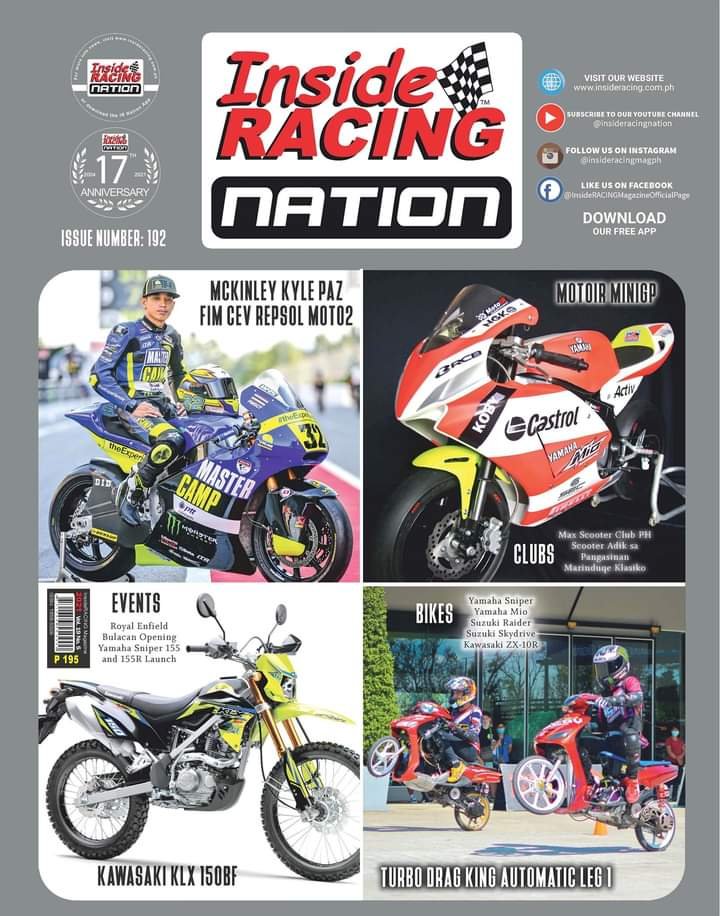